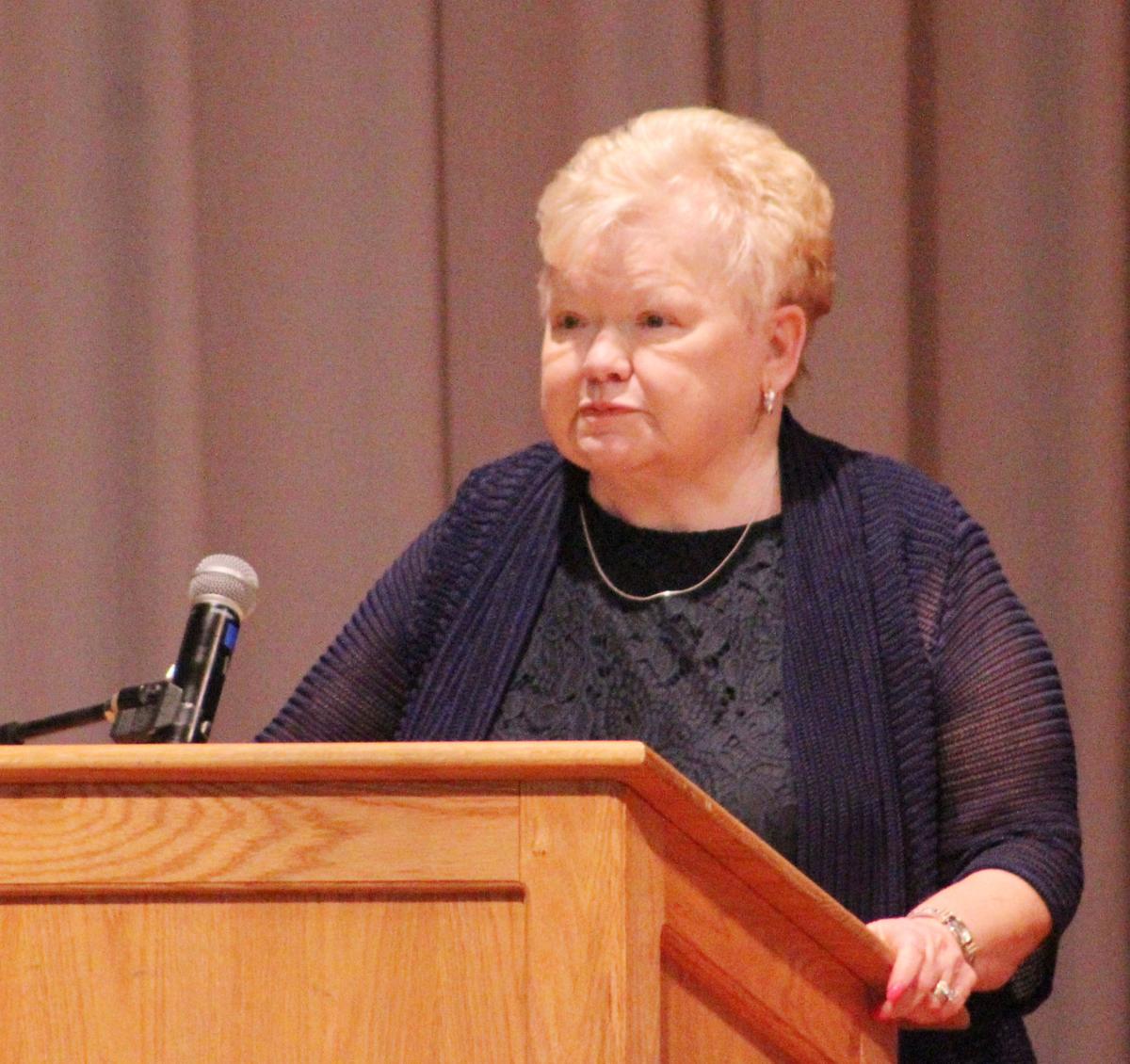 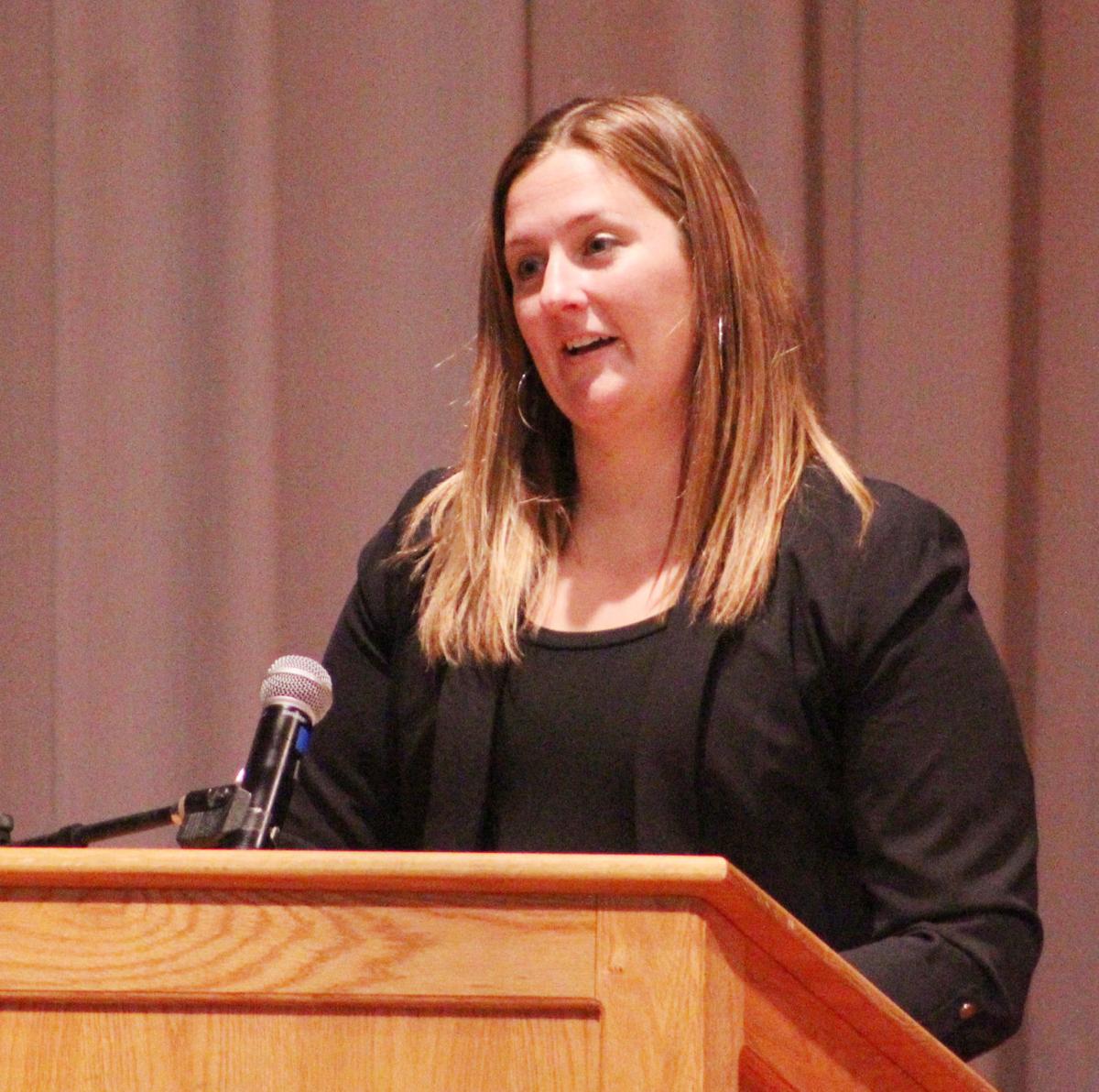 Elizabeth Silver, a candidate for a seat on the Hoopeston Area Board of Education, speaks during Monday’s candidate forum. 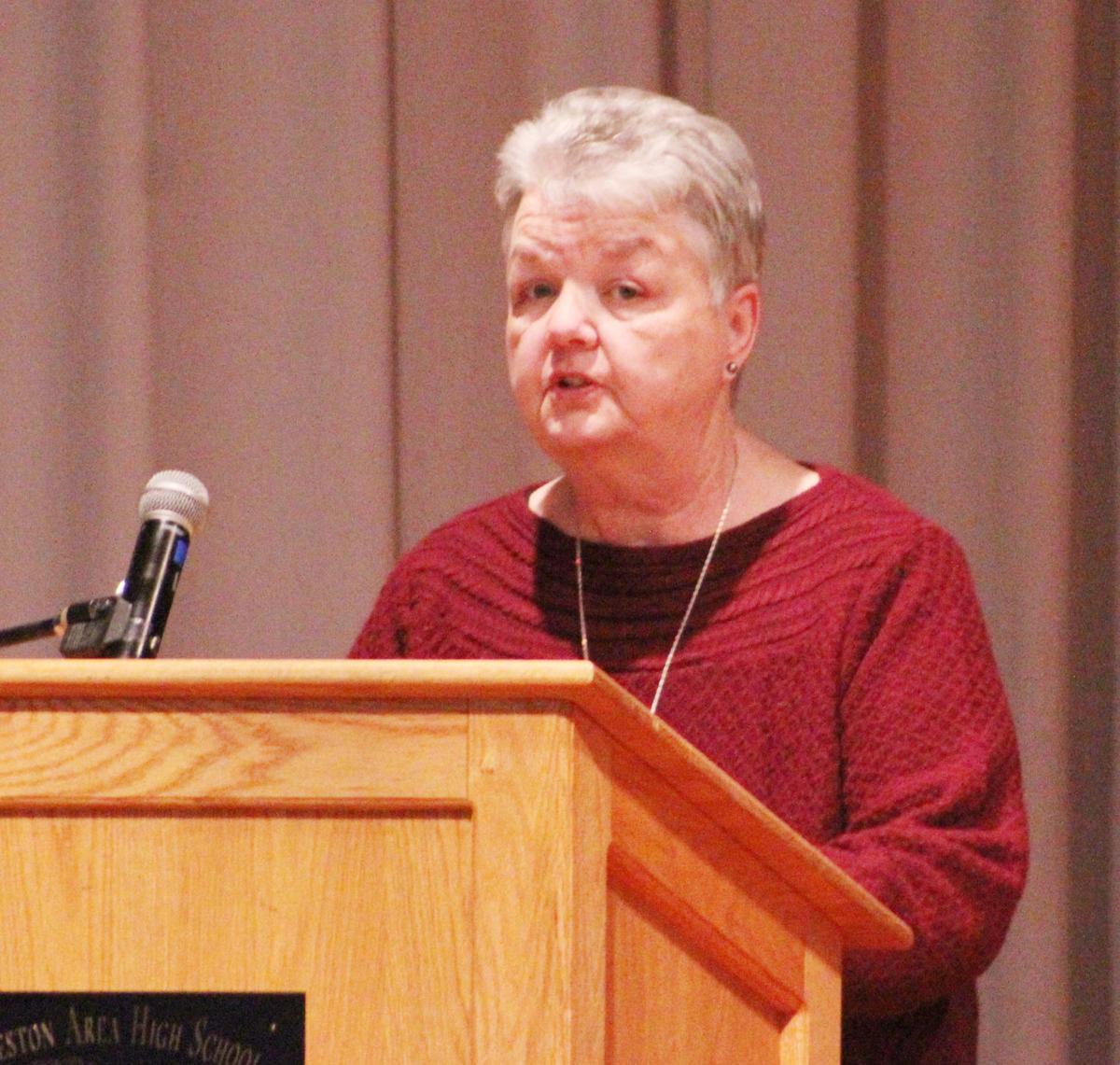 Sharon Zorns, a candidate for a seat on the Hoopeston Area Board of Education, speaks during Monday’s candidate forum.

Elizabeth Silver, a candidate for a seat on the Hoopeston Area Board of Education, speaks during Monday’s candidate forum.

Sharon Zorns, a candidate for a seat on the Hoopeston Area Board of Education, speaks during Monday’s candidate forum.

Hoopeston Area School District voters had the chance to hear from three candidates who are seeking election to two seats on the board of education Monday night.

During a public forum hosted by the Hoopeston Education Association and the Save the Lorraine Foundation in the Hoopeston Area High School auditorium, incumbent Debbie Klaber and candidates Elizabeth Silver and Sharon Zorns answer a variety of questions over the course of an hour.

Due to COVID-19 restrictions, live attendance for the forum was limited to candidates and a few audience members. The event was livestreamed and broadcast and can be viewed in its entirety at https://www.youtube.com/watch?v=FJS6HVkybQs&amp;t=6068s or by searching for “Hoopeston Elections Candidate Forum 2021” on YouTube.

The Chronicle has highlighted a few of questions and answers provided below, but encourages voters to view the forum in it’s entirety to hear all of the candidate’s answers.

Each of the candidates introduced themselves and highlighted why they are seeking election to the board.

Klaber, after acknowledging fellow Board Member Lawrence Jahn, Lisa Leigh and Craig Lee, all of whom chose not to seek re-election, for their service to the district, spotlighted her 36 years of teaching experience in the Hoopeston community.

Silver spoke about how being a member the Carle Foundation Hospital communication’s department for the past 12 years has helped her learn so much more about the Hoopeston community.

Silver discussed her volunteerism and philanthropy in the community, stating that she has become invested in and passionate about this work over the past 12 years.

Zorns was also a longtime educator, working with kindergartners all the way up to graduate students, and feels there is no greater challenge and no greater reward than working in education.

Candidates were asked what particular expertise or skills have prepared them to serve on the board of education.

Zorns pointed to her long career in education and her organizational skills, which she feels is necessary to serve on the board. She also feels like she has a vest interested in the district since she has grandchildren in this district.

Zorns also said she has administrative experience and feels she can bring this, along with her educational experience, to the board if elected.

Silver admitted her expertise is not in education, however, she said she can appreciate the work teachers do because she remote taught her own child for a few months and “it wasn’t pretty.”

She said her expertise lies in working with the community as part of her degree is related to organizational leadership and community service.

Silver said she’s not looking to shape educational policy, instead she feels she can help make sure the right people are in the right place to make those and that board members are working together to make those decisions.

Klaber feels that her long career teaching in the district provides her a perspective of how the district has worked in the past and what they need to do for the future.

She also pointed to her four years of experience on the board of education, which she said has been a learning experience.

Klaber said she was named a level one master school board member by the Illinois State School Board Foundation, but really didn’t think she deserved that individual recognition because being a part of the school board is team effort and that team efforts comes from working with other board members, the Hoopeston Education Association, district administrators and the community.

The candidates were asked what they feel is the role the board of education, as well as administrators and staff, should play in creating effective schools.

She said the board needs to ensure there are policies in place so that administrators can do their jobs without stressing over minute policy details then these administrators can enact plans at their schools that will help students.

Klaber agreed with Silver’s points and cited the work of Superintendent Robert Richardson over the past few years in building a solid relationship with the community. Klaber also praised the work of district administrators and teaching staffs.

She said her view of the board’s role is to implement policies and make financial decisions that will help the schools run smoothly. Klaber said the board’s efforts to encourage transparency with the HEA and community has helped the district run smoothly in recent years.

Zorns spoke about the board’s role in sorting through some of the mandates that come down from the state and federal government and how they can be implemented in the district.

BOB AT THE MOVIES: Odenkirk is somebody who makes the perfect 'Nobody'

Candidates were asked about the unprecedented teacher shortage Illinois is currently in the midst of and how, as members of the board, they would help bring in teachers to the school district.

Klaber said the teacher shortage is one of her major concerns for the future.

She cited a recent report that 77 percent of all Illinois superintendents are having a hard time filling positions in the school districts and pointed out the Hoopeston Area has had 12-13 long-term substitute teachers due to the shortage.

Klaber said the district needs to remain competitive with its salaries and benefits. She feels the district has done this, pointing out that the district is one of the better paying districts for teachers in their fifth or sixth years teaching in the district.

Klaber also feels they need to keep the culture of education at the forefront and continue to focus on developing students with an interest in teaching and working to bring them back to teach in Hoopeston after college.

Zorns agreed that developing local students who want to go into the field of education who want to return home to teach is important.

She also agreed that having a culture of educational importance and involvement in the schools is vital to drawing teachers to Hoopeston Area.

Zorns also cited the need to development good contacts with the various education departments across the state so that Hoopeston Area’s name is out there.

Silver said she is intimately aware of the problems caused by the teacher shortage because she’s worked in healthcare for 12 years and has seen the hardships created by the nursing shortage in that field.

She said the efforts that were mentioned by Klaber to develop local students to return after graduation are important, but, ultimately, the decision to teach in a school district comes down to compensation.

Silver said the world is changing and people have more options than ever. She cited friends who graduated with an education degree and opted to leave the state and teach in Arizona or Florida where they could either make more money or have more fun.

The candidates were asked about the district’s finances and what financial areas they feel could be used to create new revenue for the district.

In Illinois, Zorns said, the primary revenue for education comes from areas that Hoopeston is hurting in right now. She said the area has lost a lot of business and industry. She said the district doesn’t have a lot of leeway when it comes to where it can draw revenue from.

Zorns said Hoopeston has a lot of properties that aren’t providing much tax money right now, so encouraging business and industry to come into town would help when it comes to education funding.

Silver admitted that school finance is the most confusing subject to her. She said she has helped her father with audit reports many times and has talked with her husband about audits before and it’s a little bit of a blur.

Even so, Silver said she knows that the school district has around $12.5 million in its bank. She said the district is a not-for-profit and doesn’t need to have that large of a bank account when it has things it could be doing with it like increasing compensation for teachers and improving buildings.

She cited the failed attempt to pass the governor’s fair tax has already prompted Gov. J.B. Pritzker to discuss the possibility of cuts to education funds. Klaber said district auditor Russell Leigh has also informed the board of the possibility that pension responsibilities could be shifted from the state to local districts.

Klaber said that the district is in a position to potentially shoulder this burden, should it happen, because of its surplus funds. She said many of the smaller districts around Hoopeston Area may not be able to absorb that cost.

She also pointed to the move to a $15 minimum wage and the $40,000 starting wage for teachers that are coming in the future that will have to be built in to district budgets.

These are just a few of the questions that were asked during Monday’s forum. The Chronicle encourages voters to view the forum in its entirety at https://www.youtube.com/watch?v=FJS6HVkybQs&amp;t=6068s or by searching for “Hoopeston Elections Candidate Forum 2021” on YouTube.

Monday’s forum also featured candidates for Hoopeston mayor and city council. A story about those races will be featured in next week’s edition of The Chronicle.