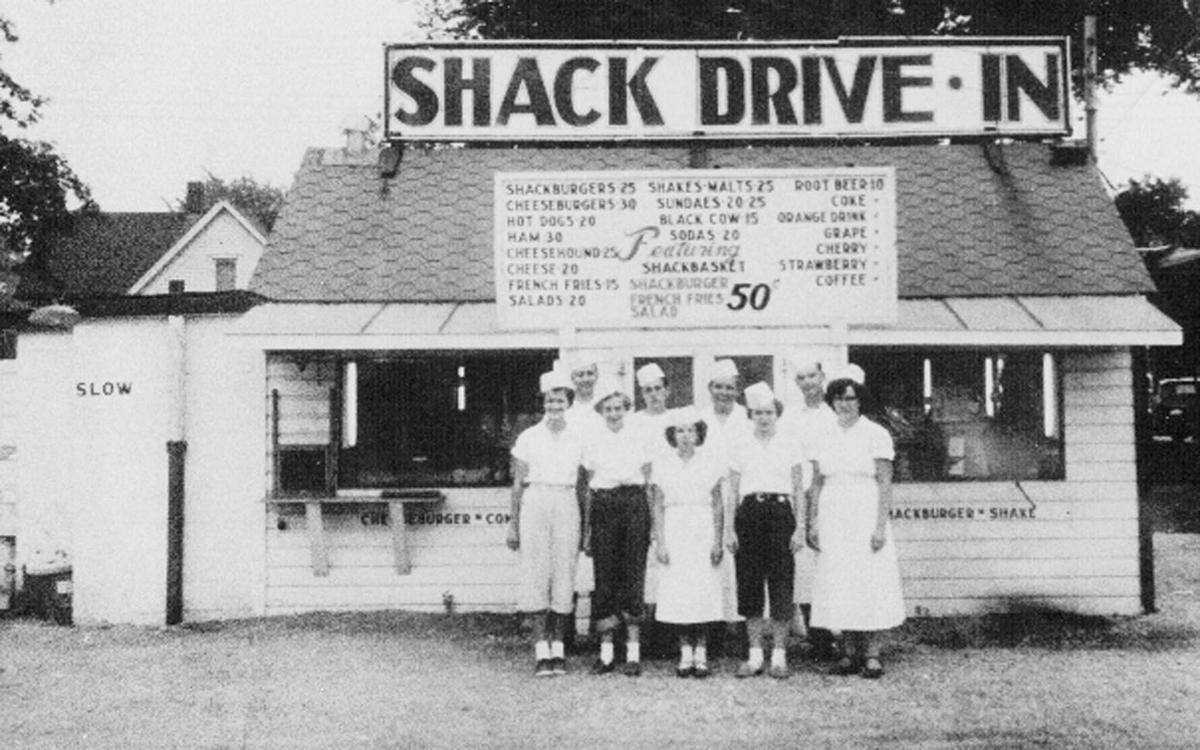 A look at the Shack Drive-In in 1949 in Hoopeston. 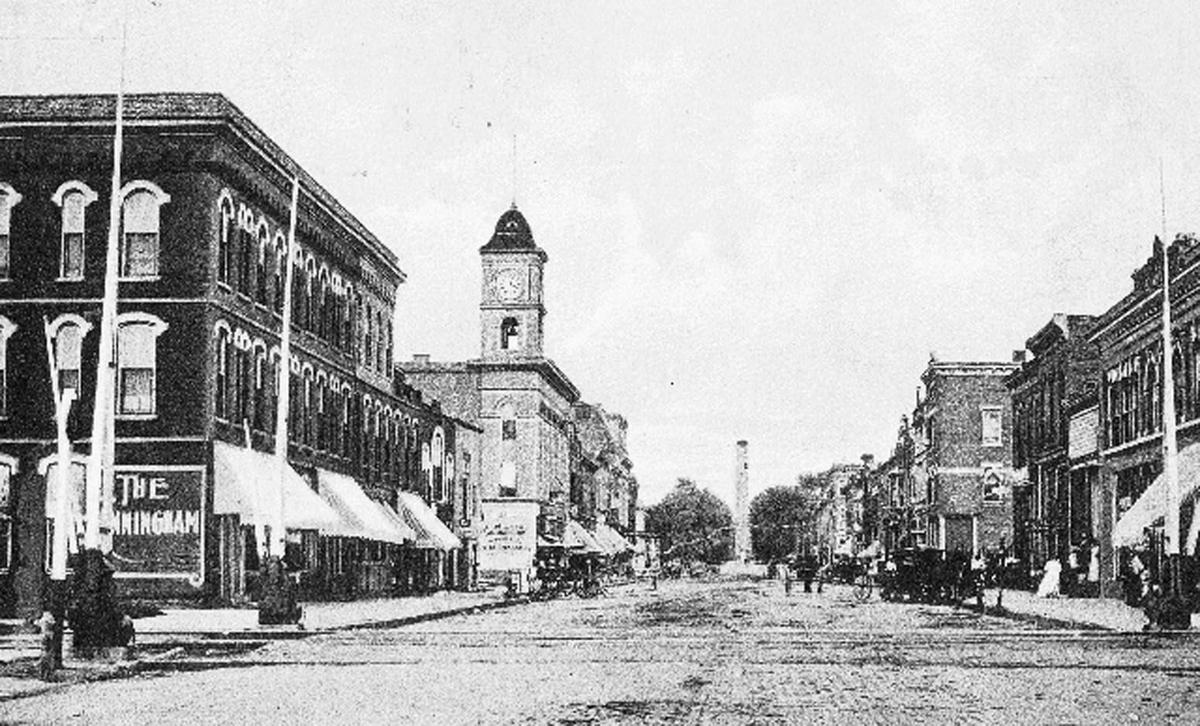 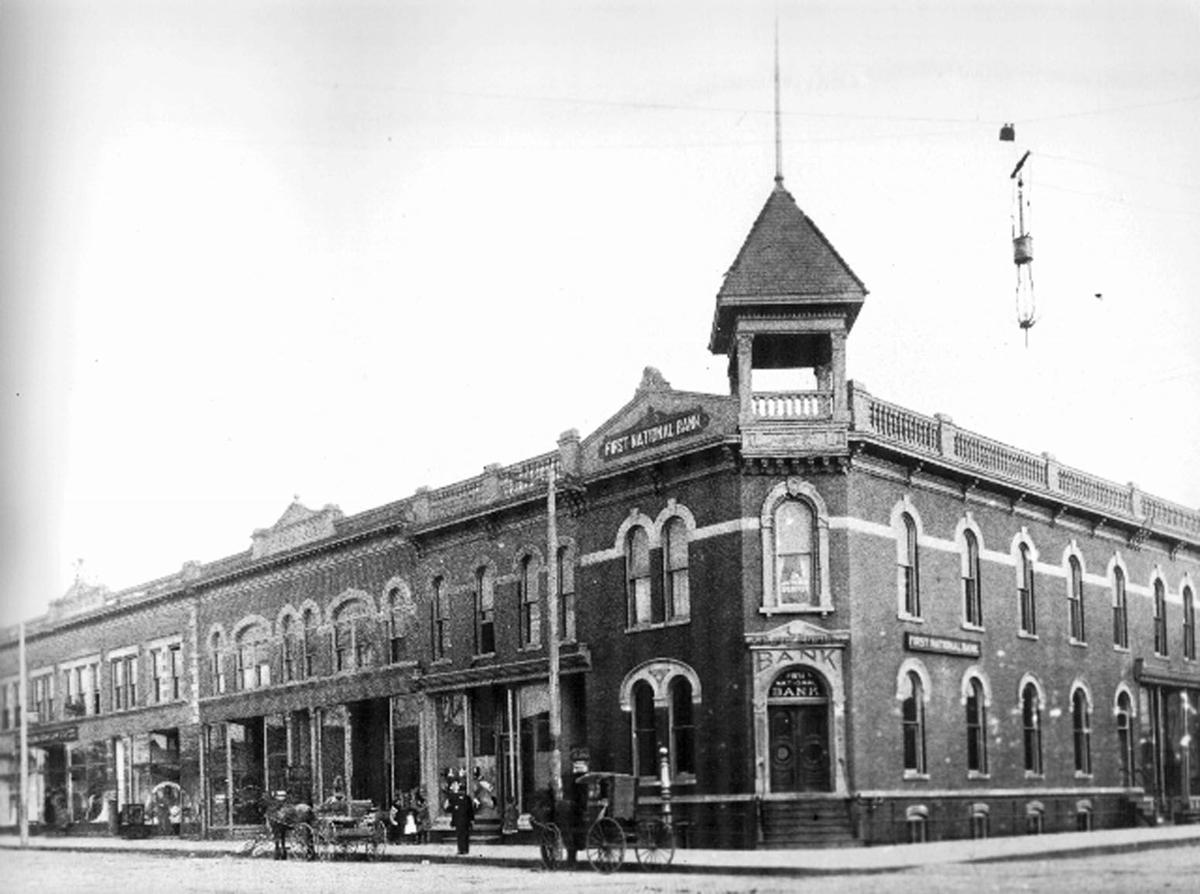 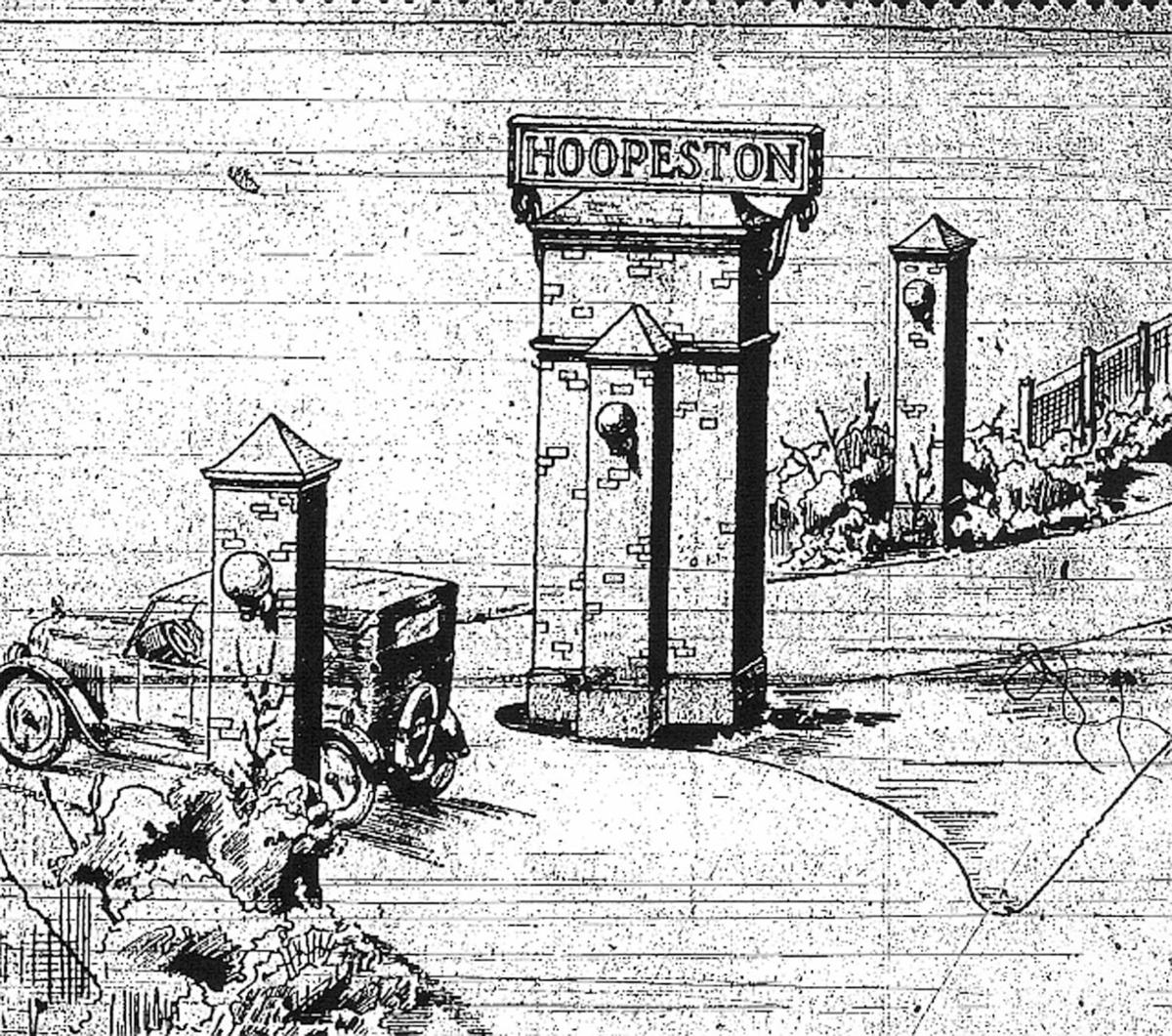 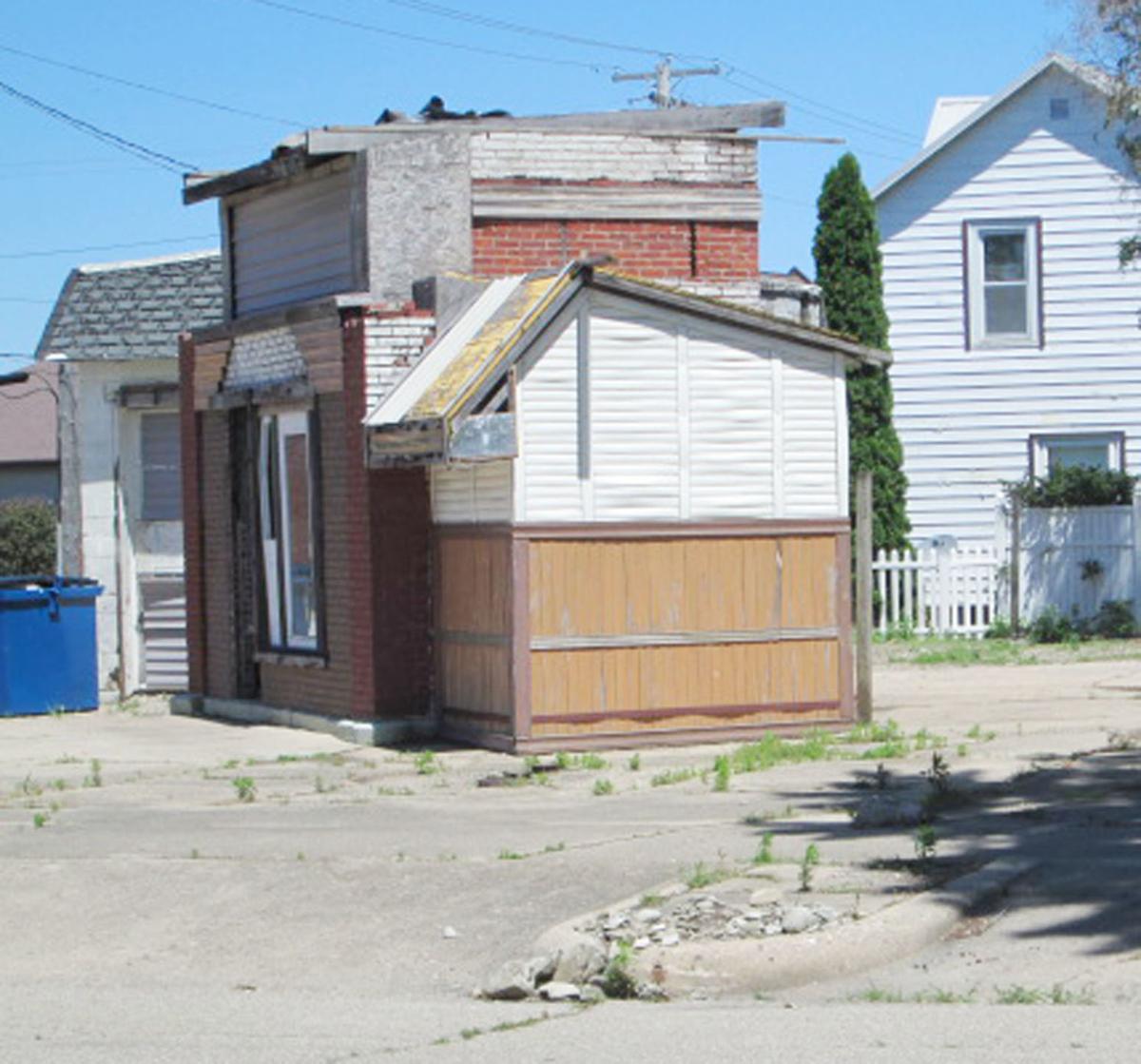 The former site of the Humble Enco Gas Station in Hoopeston.

A look at the Shack Drive-In in 1949 in Hoopeston.

The former site of the Humble Enco Gas Station in Hoopeston.

During Hoopeston’s formative years, many changes took place and although postcards were the norm at one time when I was growing up, they have become lost to the generations. Postcards were memories of what Hoopeston’s history looked like at one time for the resident or visitor.

When Hoopeston was first built, beginning in 1871, it was several miles east of the main north and south road, the Dixie Highway, which today is Route 1. In 1923, the Hoopeston Chamber of Commerce, being a forward thinking group of men, decided to sponsor a gateway to bring attention to the fact that a town lay a few miles east.

This idea and a tentative rendering of a gateway were presented to the Hoopeston City council that year. They liked the idea and approved it. Construction began later in 1923 and was finished in May of 1924.

However, a drawback existed that the Chamber thought about and, after giving it much thought, decided lighting was the way to go to bring more attention that a town existed further down Main Street. In 1925, the gateway itself was lighted by the Chamber and lighting was added along Main Street from the Dixie Highway to downtown Hoopeston, pointing the way to an adventure of discovery for curious drivers.

This next photo is a picture of the First National Bank located in the McFerren Building on the southeast corner of Market and Main Streets. This shows how it looked in 1902. It only had two stories then and, if you look closely you can see steps going into the building from the sidewalk and windows at the sidewalk level.

Not exactly sure when the sidewalk was raised and the steps removed so the doors were at ground level but the sidewalks were raised later. As you can see in this photo, the McFerren Building only had two floors plus the basement in 1902. That changed in 1903 when a third story was added to the building and the little cupelo and decorations were removed from the top of the building.

This postcard of East Main Street from the railroad tracks shows the way Hoopeston looked in the early 1900s. The Cunningham Hotel was first called the Arlington House built in 1885 by David Prutsman. It too only had two stories with a third story added later. The name was changed when the Cunningham family bought it and again later when R. L. Cragg bought it. When I was growing up it was the Cragg Hotel and housed a beauty shop and coffee shop inside. It burned down March 17, 1965. The lot where it once stood now has an outdoor patio for the 112 Wine and Coffee Shoppe.

Administrators outline issues with remote learning at board meeting

The lot where the tower stood remained empty for a number of years when sometime in the 1950’s someone decided to build the Downtown Motel.

One of the most talked about and remembered hang-outs was the Shack Drive-In of the 1950s to 1970s. It was the place to meet friends, get a job before your were 16 or just drive through to see who all was out cruising. The Shack Drive-In opened May 3, 1945 and was actually a root beer stand started by Ralph Lloyd and Ron Ripley.

Ripley left to go into business for himself in Paxton and Earl Smock, later Mayor Smock, bought him out. Lloyd and Smock both owned the Darb pool hall so it was natural for both to own The Shack. When Smock realized he wasn’t cut out for the fast food business, each man took a business as their own and went their separate ways.

Lloyd expanded the menu from fast foods and his famous Ranchburber, cokes, fries and milk shakes to include steaks, seafood, and chicken meals. It became a full service restaurant and bar lounge by 1969 and the name was changed to Mr. L’s. Lloyd retired in 1971, and sold the business to Jesse Stark of Danville.

The first workers at the Shack Drive-In were Barbara Garner Lewis, Joyce Curry, Joanne Glover, Mary Lou Taylor, Phyllis Goyette, Danny Wood, and John Veneble. Ralph Lloyd and Earl Smock are also in this photograph. This was an actual photograph from a copy given to the Chronicle several years ago by Marguarite Lloyd, Ralph’s wife.

The next item is also a real photograph given to me by John Musson, a 1961 classmate, of the Humble Enco Gas Station that stood across from the Lorraine Theatre on Main and Third Streets. The photo was taken after an accident had taken place in the 1950’s. It was a small little gas station and shows how it looked as a thriving little business.

Old photos and postcards hold a lot of memories so when going through Grandma and Grandpa’s things or your parents, don’t be so quick to throw them away. The library will take some of the older ones and other people collect them as you can see when you put in “Hoopeston” on ebay’s search site.