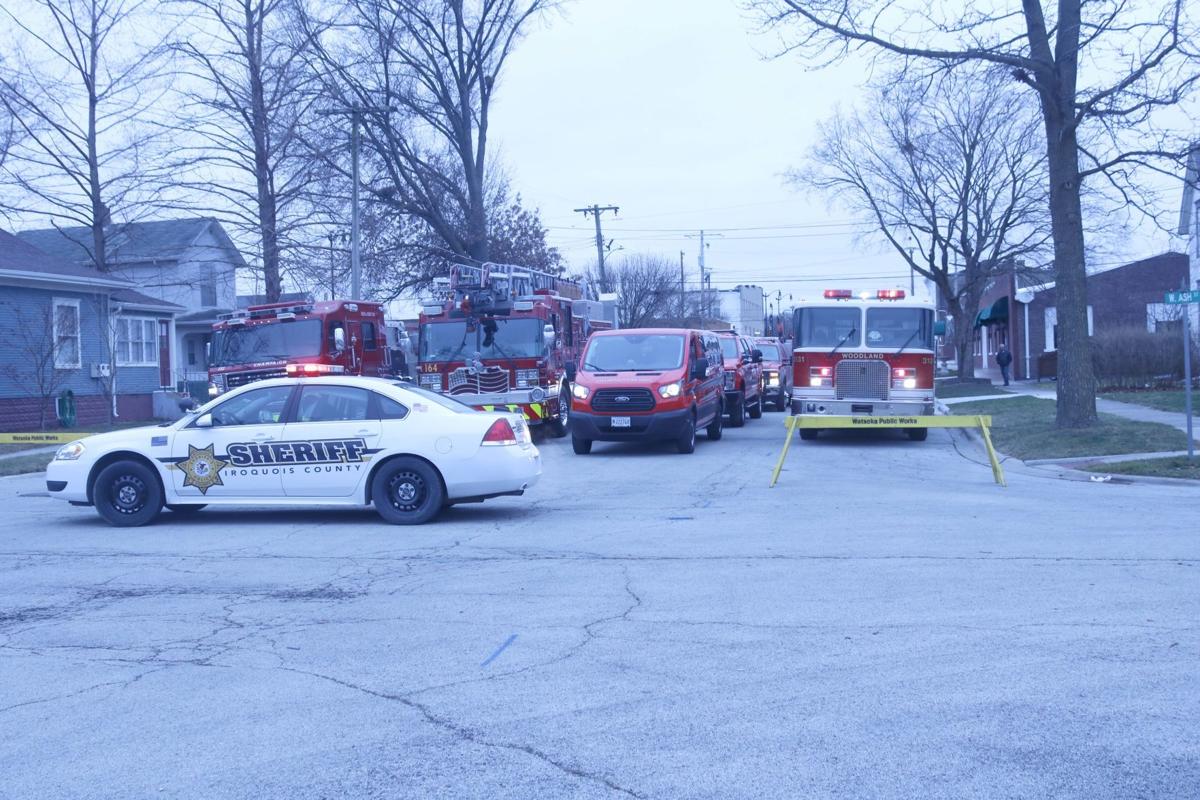 Fire engines and other emergency vehicles are lined up on Third Street outside Baier Funeral Home in Watseka. 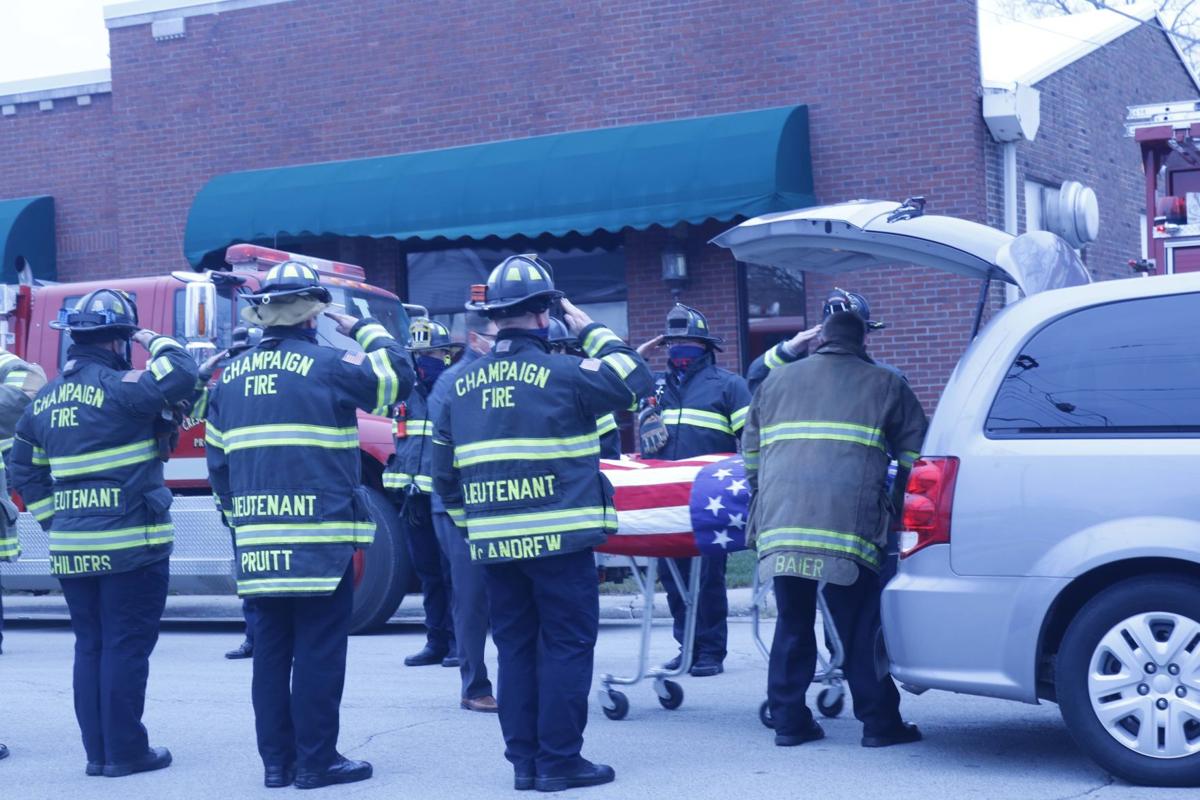 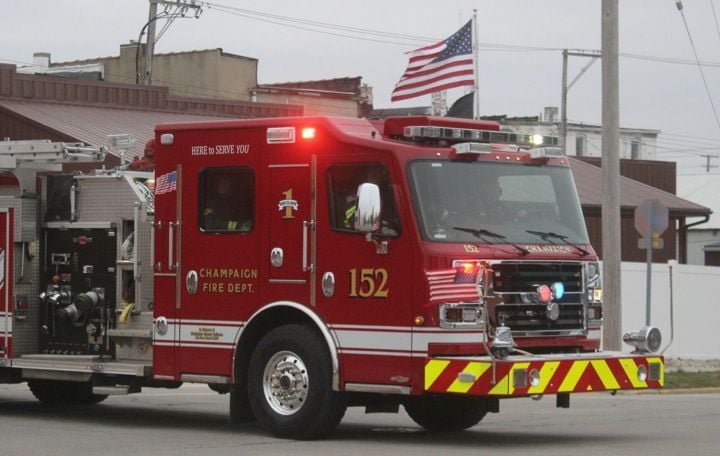 Champaign Fire Department’s truck 152 pulls along side Baier Funeral home to honor Dominic and Kimberly Smith who were killed in a car accident on Dec. 25. 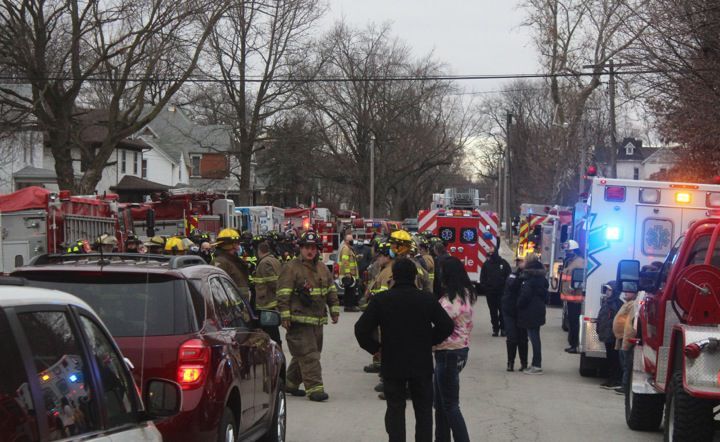 Family, friends and emergency responders from across the area gathered outside of Baier Funeral Home to pay their respects to Woodland Fire Chief Dominic Smith and his wife Kimberly. 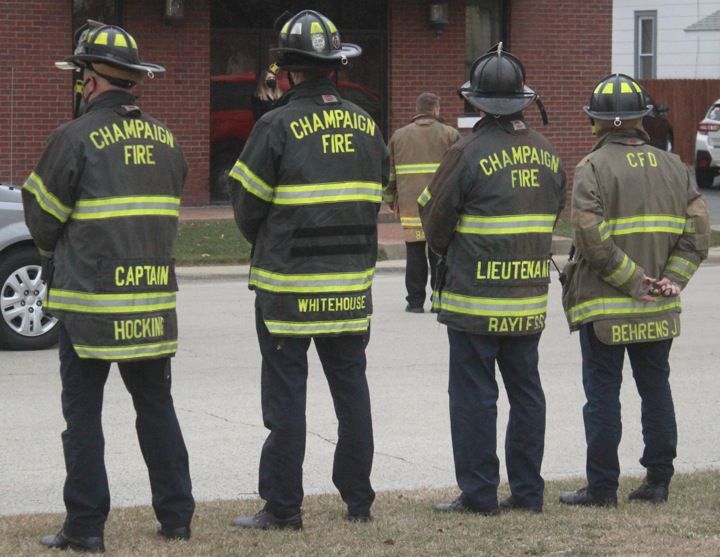 Fire engines and other emergency vehicles are lined up on Third Street outside Baier Funeral Home in Watseka.

Champaign Fire Department’s truck 152 pulls along side Baier Funeral home to honor Dominic and Kimberly Smith who were killed in a car accident on Dec. 25.

Family, friends and emergency responders from across the area gathered outside of Baier Funeral Home to pay their respects to Woodland Fire Chief Dominic Smith and his wife Kimberly.

Firefighters from around the area honored the Woodland fire chief and his wife the afternoon of Dec. 28.

Dominic Smith and wife Kimberly were killed in a two-vehicle accident Dec. 26.

On Monday many fire departments in the area as well as other emergency responders from police and ambulance services, escorted the hearse carrying the couple’s caskets to Baier Funeral Home in Watseka.

The Champaign Fire Department noted on its social media that Dominic Smith had been with the department for 16 years and was assigned to Station 6 in southwest Champaign. He also was a U.S. Army veteran.

Woodland Assistant Chief AJ Kingdon said Dominic “definitely knew how to light up a room. He was always positive and light and cheery.

Kingdon said he had known Dominic for several years. Dominic’s daughter was in school at the same time as Kingdon.

He then really got to know him about nine years ago when Kingdon joined the Woodland Fire Department.

“He was the nicest guy you’d ever meet and would do anything to help anyone,” he said.

Kingdon said when the new firefighters joined, Dominic would help them. “He’d take them under his wing,” he said. “He’d teach them everything he could whenever the opportunity arose.”

He said, too, that when Dominic — who joined the Woodland department in 1999 — became chief about two-and-a-half years ago, he had a goal of getting the department as updated and modernized as he could and that was something he was working on.

BOB AT THE MOVIES: Latest 'Conjuring' installment is rehash of same formula

Kingdon said the outpouring of support to the Woodland department from other departments and people in the community has been tremendous.

He noted that the escort processional on Monday was attended by not only the departments in Iroquois County and the Champaign department, but by departments even farther, such as Hoopeston, Paxton and Aroma Park.

Ashkum Fire Chief Jeff Glenn was one of many firefighters present Monday to honor the Smiths.

He said Dominic always had a smile on his face and was ready to help however he could.

Glenn said he also found Dominic to be a very knowledgeable firefighter and was dedicated to his full-time department and his volunteer department.

Dominic would attend most all the fire association meetings, only missing when he was working a shift, Glenn said, and was also always ready to help distribute materials to other departments or do whatever was needed for the association.

“He took the job seriously and he understood the need to get together and talk about things (as an association),” he said.

Glenn said it is also important for people to understand the bond that the firefighter community has, which extends to family members. He said the firefighters will honor Kimberly as much as Dominic, noting that the role of a firefighter’s wife is incredibility important.

The accident occurred at the intersection of County Roads 1400 North and 1500 East. Preliminary investigation, according to Iroquois County Sheriff’s Police reports, indicates that a vehicle driven by Blake Martell, 18, Watseka, was southbound on County Road 1500 East when he disobeyed a stop sign at the intersection with 1400 North, entered the roadway and struck the Smith vehicle, which was eastbound. Both vehicles went off the road and came to rest in a field. The Smiths, Martell and a 17-year-old passenger in Smith’s vehicle were all ejected from the vehicles. The Smiths were both pronounced dead at the scene and Martell and the passenger were both airlifted to Carle Foundation Hospital in Urbana for treatment of their injuries.

The accident remains under investigation by sheriff’s police.