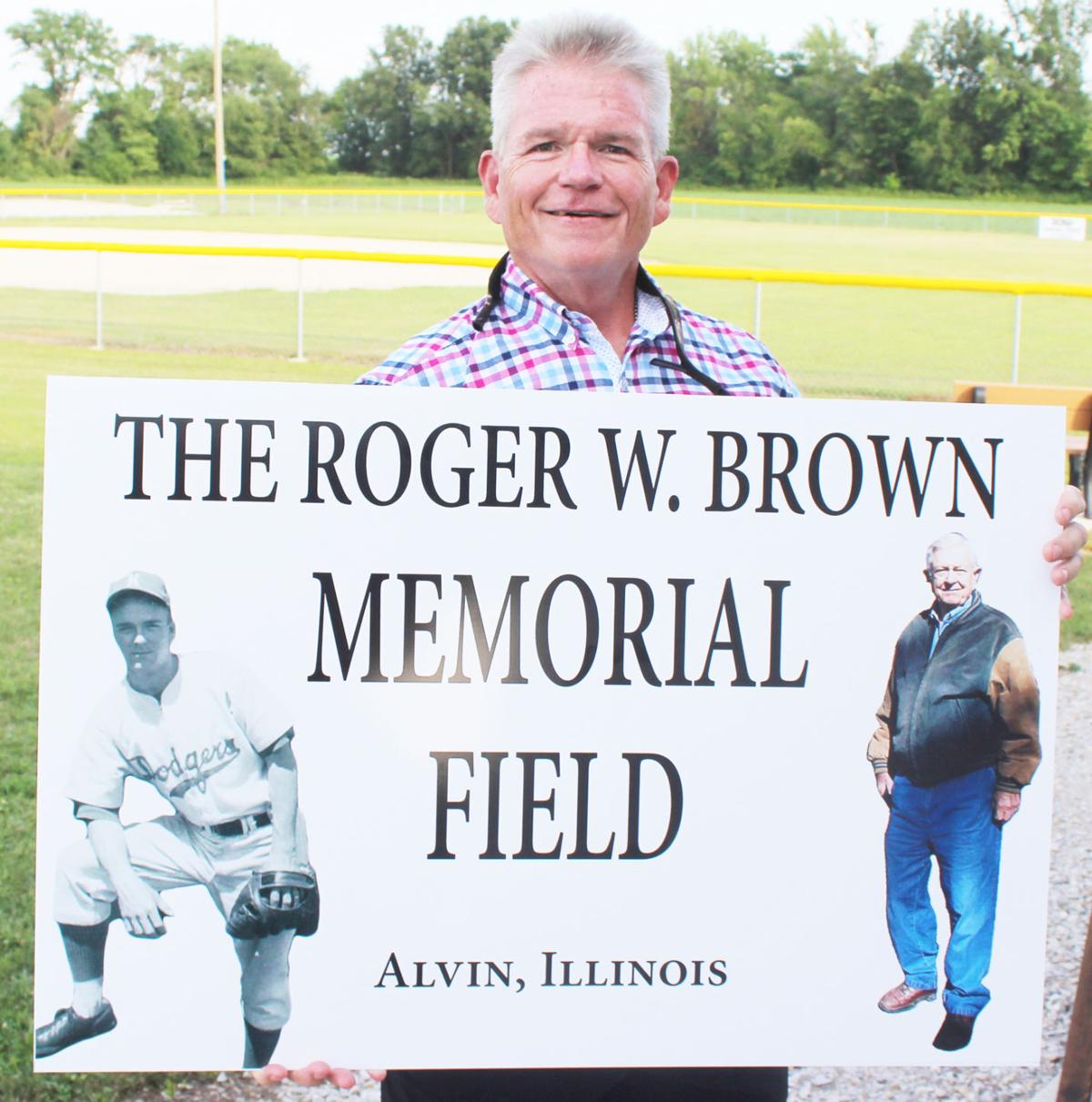 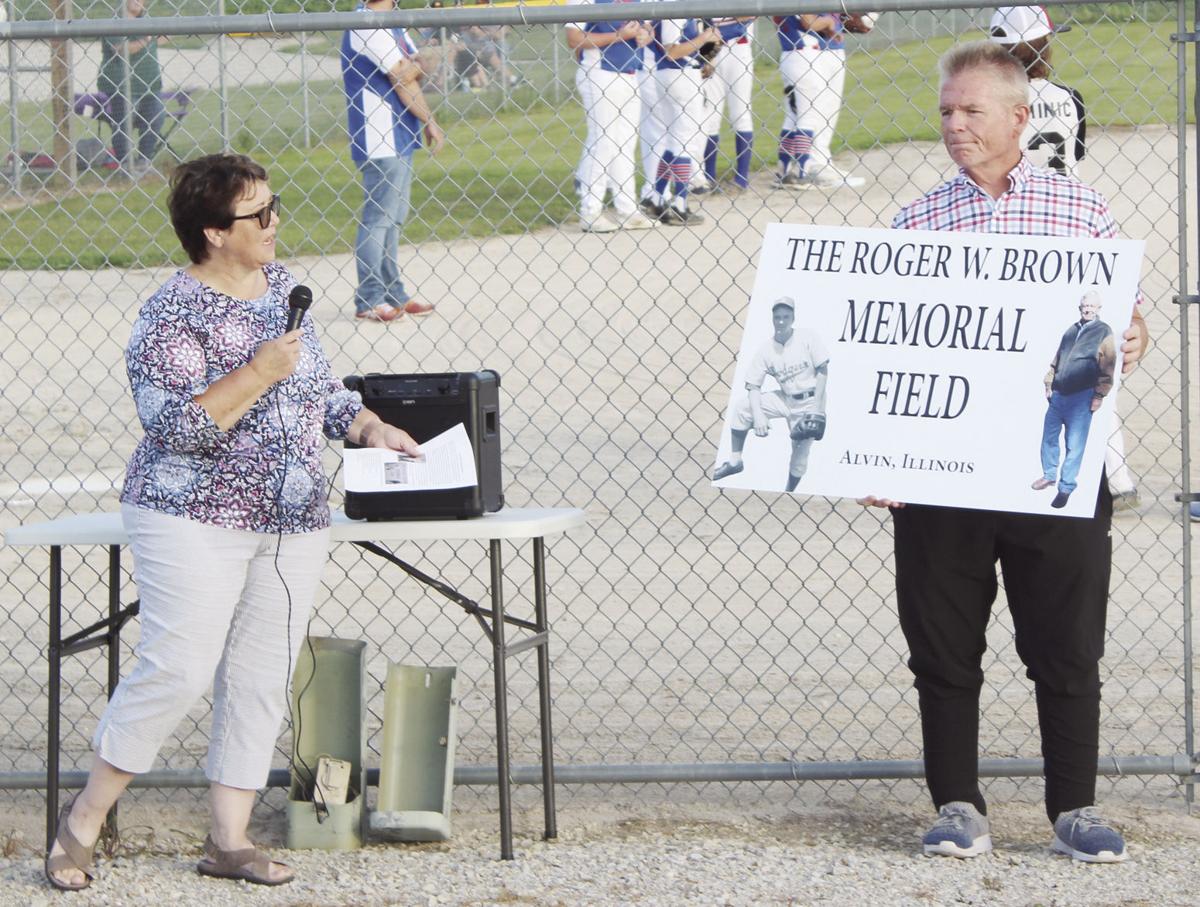 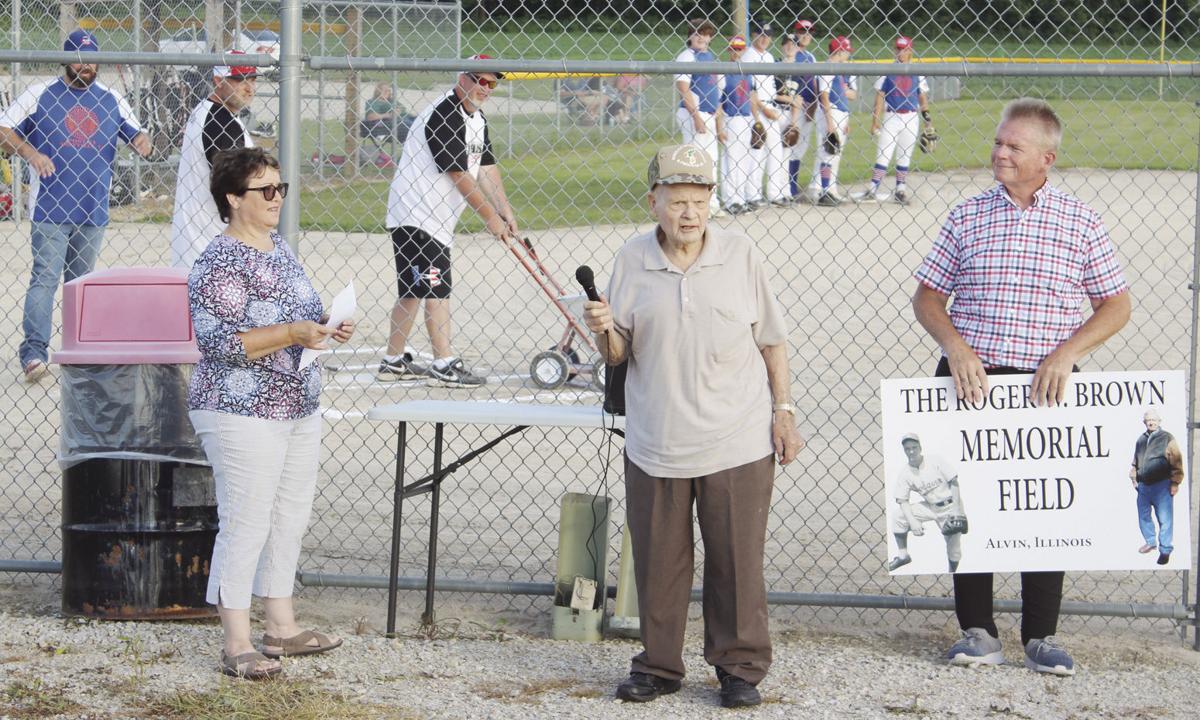 The Village of Alvin honored the memory of a native son by dedicating the baseball field at Homer Carter Park to the late Roger W. Brown Saturday.

The field, which has been restored over the years through the efforts of volunteers, was dedicated as the Roger W. Brown Memorial Field.

As part of Saturday’s celebration, the field’s concession stand was opened and village residents were invited to come out see the dedication ceremony as well as a game between two area youth baseball teams, Davan’s Body Shop and American Legion 21.

During the dedication ceremony, Brown’s son, Roger Brown Jr., said his family appreciates the village of Alvin for honoring his father by dedicating the baseball field to his memory.

“His grandkids, his great-grandkids and I are very proud and we want to thank all the contributors and people who worked on this project for 20 years to get the field where it is today,” he said.

Village of Alvin Board Member Thelma Lete echoed Brown’s appreciation for all those helped.

“The village thanks your family as well as all the others that have helped our small village obtain everything that we have here,” she said.

Lete said the ball park project really got start when Homer Carter, for whom the park the ball field is in is named, donated the property for the field.

“That was something that started this whole project,” she said.

Lete said the village has spent the last few years working on make the field more playable through various donations and volunteers.

One of the most recent improvements to the field was the addition of lights for the field.

The lighting was made possible through a donation from the Roger W. Brown estate as well as a grant from the Cadle Foundation and funds from the village.

“We’re all excited to have the lights now so that we can have more kids playing throughout the day,” Lete said.

The baseball field was developed through the donations and efforts of various area businesses and residents.

Also speaking during the dedication ceremony was one of the few area residents who could say they played baseball alongside Roger W. Brown.

Thornsbrough, who called himself a “terrible catcher” but a “real good hitter,” described Brown as a nice guy who was pretty quiet.

He recalled heading into town with Brown and his friends to Brown’s father’s store to buy drinks on most days when they were growing up.

Brown was recruited early in his career, signing to play with the Brooklyn Dodgers on May 16, 1945 at the age of 15, the youngest player ever signed by the Dodgers.

Brown’s jersey can be seen at the Rossville Historical Society.

Brown graduated from Alvin High School in 1947 among the last class to graduate from the school before it consolidated with Rossville. From there he went to Illinois State University for two years, pitching for the Red Birds his freshman year.

A career highlight from his college years was striking out six players while pitching against DePaul at Wrigley Field.

Brown attended the University of Illinois his junior and senior year.

He broke his ankle sliding into second base in the summer of 1949. Brown then helped out with coaching at the University of Illinois.

Brown would later serve in the U.S. Air Force and eventually took up a successful career in aerospace and electronics.

Though his playing career took him far from Alvin, Brown never forgot his hometown or the memories he forged playing baseball there.

He was quoted as saying “Playing baseball on the Alvin baseball field has just as many important memories to me as playing baseball with the Dodgers and at college. Never forget your hometown.”

Prior to the dedication ceremony, Brown Jr. also reminisced about his father.

After his playing career was over, Brown still loved the game and imparted that love onto his son, who he coached through the years.

“I had to play baseball in the spring,” Brown Jr. said. “He coached most of the teams I was on.”

Asked if there were any specific lessons from his father that stuck out to him, Brown Jr. said his father taught him the importance of hitting to get on base, not for power.

“Because he and my grandfather were old school, I was taught to bat for line drives, not home runs,” he said.

Brown Jr. said this lesson was important in his final year of organized baseball when he was batting fourth against players who were a few grades older than him in a pony league.

Brown Jr. said his father always loved coming back to Alvin even after moving across the country.

When Brown was able to move to Deerfield, Ill. for his job, he was overjoyed at the chance it provided him to come home to Alvin on a more regular basis.

Brown Jr. said his father loved coming back to Alvin to hunt pheasant and get the chance to connect with his old friends and community.

“This was his hometown,” he said. “His heartstrings were tied here.”