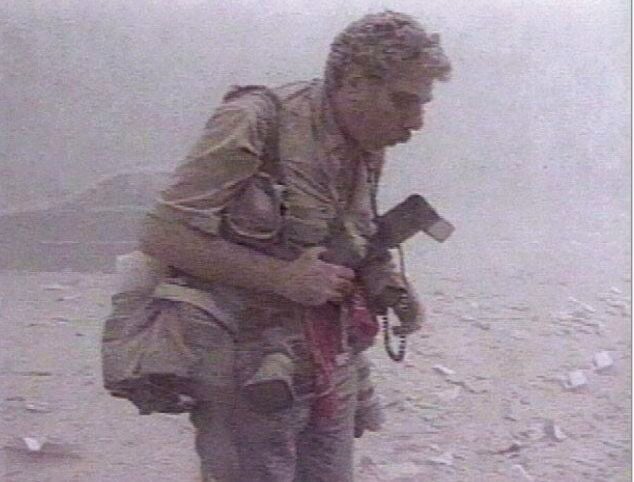 This is a photo of Scott McCoy's award-winning photojournalist friend Allan Tannenbaum, who is covered with white ash as he took photos in the aftermath of 9-11. Tannenbaum lived a couple of blocks from the towers. He immediately took his camera to the scene at 9-11. 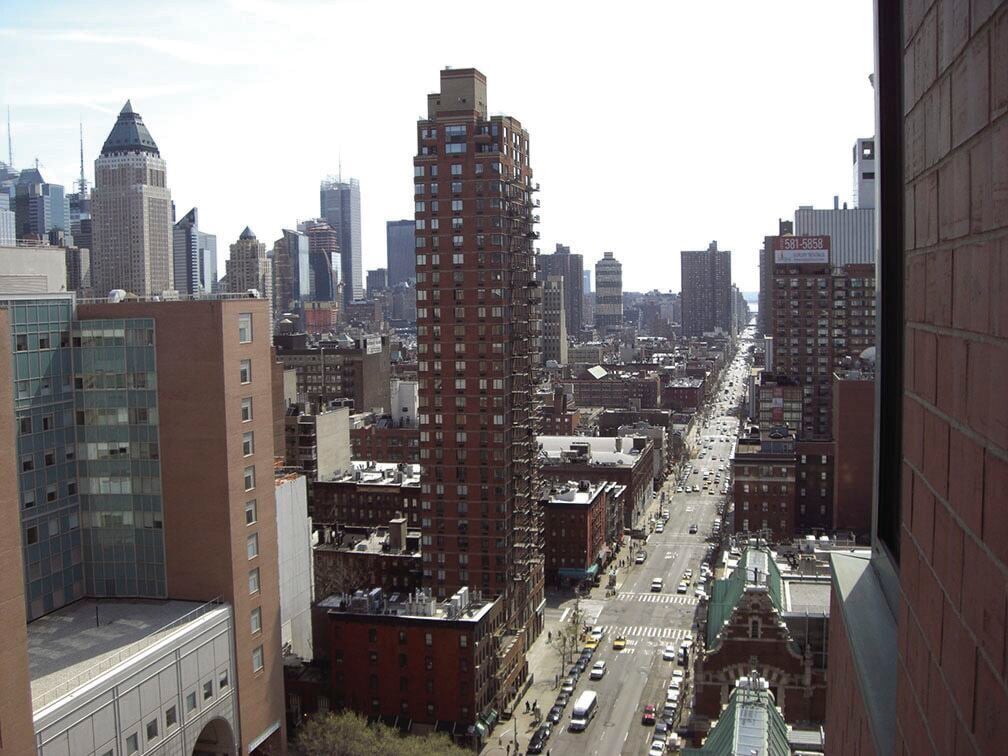 This is the view from Scott McCoy's view from his 10th Street apartment in Midtown Manhattan, which is located 4 miles from the former site of the World Trade Center. McCoy said when he first learned of the plane hitting the North Tower, he could see the smoke billowing in the near distance. 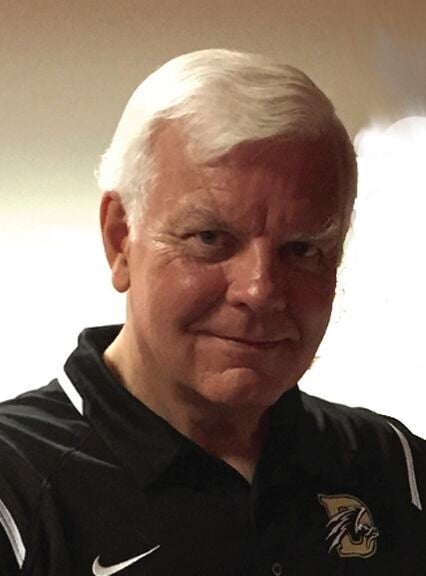 Scott McCoy worked in New York on 9/11. His band, The Rolling Bones, performed at many fundraisers for the families of the 750 Cantor-Fitzgerald employees who perished in the attacks. The wife of the bass player for the band, Lauren Manning, suffered severe burns but ended up recovering and writing a bestseller about her stamina and courage.

Like many Americans, Scott McCoy will never forget. For him, the surreal experience of 9/11, and its aftermath, are permanently etched in his mind.

That day, he was a long way from his hometown of Winchester, Indiana, sitting in his 21st floor apartment just 4 short miles from the Financial District of Lower Manhattan in New York City.

“My home office faced east and south in the corner of my apartment,” he said. “I could see the top of the WTC building. When I went to my desk that morning I saw that I had a voicemail. My friend had just called and said that an airplane had struck the World Trade Center building.”

Nearly 3,000 souls perished and thousands more were injured when four airplanes piloted by Al-Qaeda terrorists were hijacked. Two were intentionally flown into the Twin Towers at the World Trade Center causing the collapse of the two tallest buildings in the world.

“I looked out the building and saw smoke and immediately turned on the news,” he said. “At that moment on television, I saw the second plane hit the WTC tower. I called my girlfriend who worked in Manhattan, but lived in Queens, and told her not to try and go home as the bridges and tunnels may be targets also.”

At 8:46 a.m., the American Airlines Flight 11 hit the North Tower and destroyed floors 93 through 99. All 81 passengers and 11 crew members were killed.

At 9:03, United Airlines Flight 175 crashed into the south face of the South Tower. All 65 on board were killed instantly, as well as hundreds more inside the building.

Some of McCoy’s friends were grievously affected.

The husband of one of his co-workers at CNN, Linda Perry Thorpe, who was working above the 90th floor, Rick Thorpe, perished in the attack.

Another good friend, the late Rick Hadala, who happened to be approaching the building as it collapsed, saw a lady lying in the street. He tried to help her, but a firefighter looked at the woman, and told him it was too late for her. Hadala then walked 5 miles home, covered in white ash. When he washed himself off, he discovered that falling glass shards had caused multiple cuts all over his body.

Another one of McCoy’s friends, Allan Tannenbaum, who lived a couple of blocks from the towers, immediately took his camera to the scene on 9/11 and captured the collapse of the towers.

But one story that emanated from McCoy’s orbit emerged as a testament to the human spirit-- that of Greg Manning, the bass player in McCoy’s “The Rolling Bones” band, and his wife Lauren.

Both worked at Cantor-Fitzgerald in the North Tower and the plane crashed into the floor of their offices, killing 750 of their friends and co-workers.

Greg was late for work that day as he was waiting for a babysitter, but Lauren happened to be entering the lobby of the World Trade Center tower when a fireball from the plane shot down an elevator shaft and blew out the elevator doors.

Lauren suffered burns on over 80% of her body.

“She fought for months and survived,” McCoy said.

During her lengthy recovery, Greg sat by his wife’s side every day and wrote to their family and friends to keep them apprised.

Lauren also wrote her own bestseller called, “Unmeasured Strength: A Story of Survival and Transformation.”

Lauren’s remarkable story of resilience caught the attention of then candidate Hillary Clinton, who visited the spirited survivor at the hospital on several occasions. In July of 2016, Lauren was the keynote speaker at the Democratic National Convention.

Other celebrities took note of Lauren’s indomitable spirit. Oprah invited the couple to her show, and Mick Jagger, who was touched by the couple’s journey of survival, and connected to the fact that Greg was a member of a Rolling Stones tribute band, called into the program.

Jagger gave the couple a personal message of encouragement and appreciation and told Greg he was sending him an autographed guitar.

Oprah then presented the instrument to Greg.

“This is way cool,” Greg could be heard exclaiming in an audio clip of the show.

McCoy says the six-string guitar now is displayed on the wall in the couple’s house.

“Our band did multiple fundraising performances to support the families of the 750 killed from the Cantor-Fitzgerald,” McCoy said.

A 1969 graduate of Winchester Community High School, McCoy graduated from Ball State University in 1973, with a major in journalism and advertising, and as a Cardinal, played varsity volleyball.

After graduating, he moved to Los Angeles to work at the professional volleyball league, then moved up the ladder to a media planning job at Foote Cone Belding, one of the largest global advertising agencies, which led to a sales job at MTV when it launched in 1981.

He ultimately landed at CNN as VP of advertising sales in New York City.

Later on, after multiple executive positions for other media companies, McCoy would start his own independent advertising sales and marketing company called Malachite Media, LLC, where he is to this day.

He was working at his own business in his Manhattan apartment on 9/11.

“My apartment overlooked a major hospital and the emergency room entrance,” he recalled. “The day of the attack, I looked down and saw the street lined three deep with gurneys awaiting the injured. None came.”

That night he went out with his girlfriend to get some dinner because “as a bachelor, there was nothing in the refrigerator.”

“There is always a low roar in New York City with lots of sirens and cars honking their horns,” he said. “That night, there was dead silence.

“The ever-present throngs of people walking day and night were missing,” he continued. “Just stragglers. It looked like fog, but I think it was the haze created by the smoke from the towers that day that made it an eerie walk.

“The usual loud chatter and laughter in restaurants was subdued and quiet. There was a TV playing the news without sound. Most people did not go into work the next day.

“The odd smell of the tower fires lasted for weeks.”

Although the regular smell of Manhattan came back, the fog eventually lifted, the chatter and laughter returned, the impact of the most haunting day in recent history remains far-reaching.

McCoy moved back to Winchester eight years ago to be close to his family and continues to run his business.

He has visited the 9/11 Memorial at Ground Zero twice, but on the 20th anniversary of the attacks, he will stay in Winchester.

“I always, on the anniversary, keep thinking about the events of that day,” he said. “New York City was eerily empty that night and the smell from the event lasted for weeks. No one knew if it was over or if something else might happen in the next minute.

“We are all Americans and I can’t believe we are fighting each other today.”