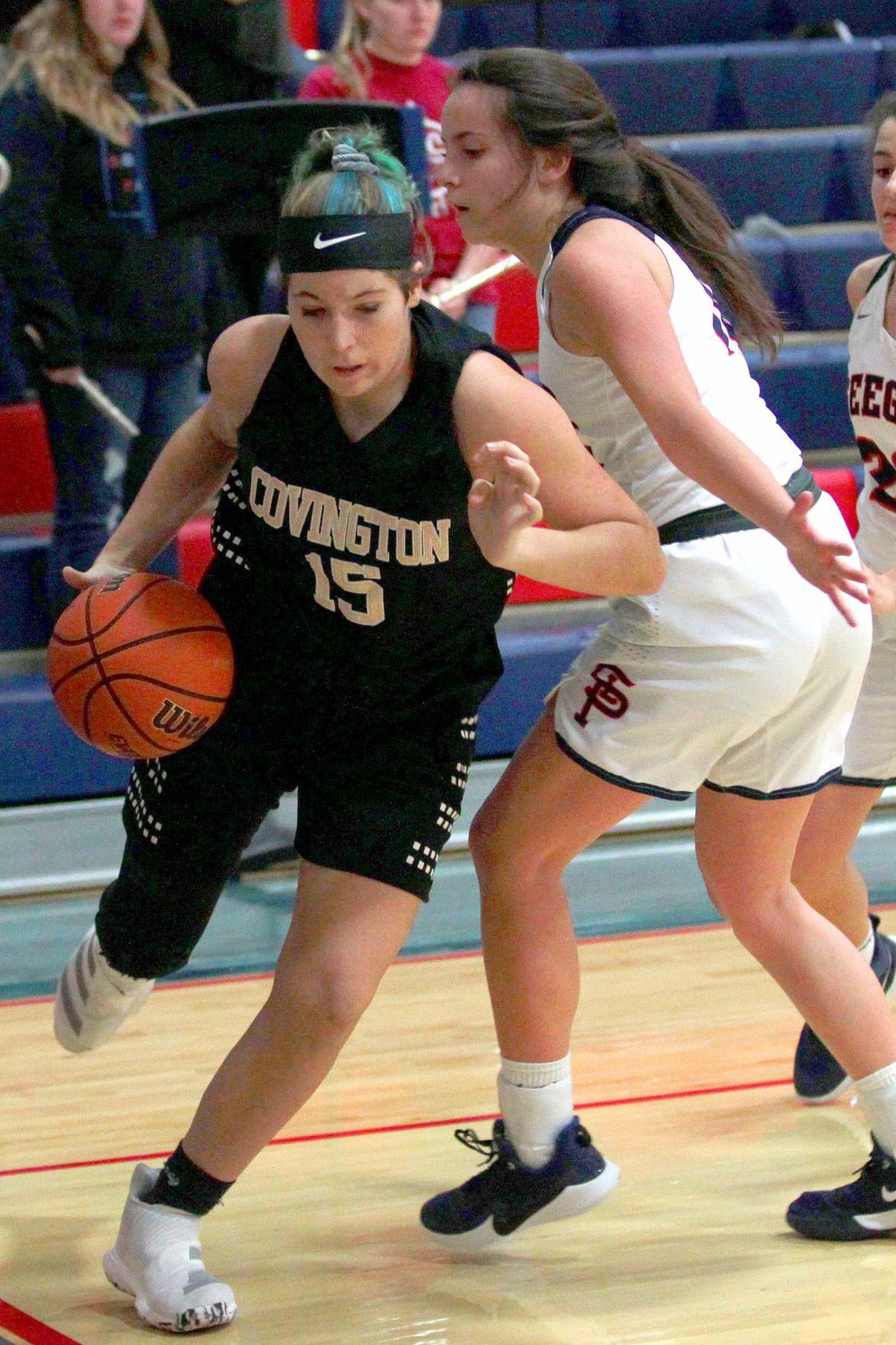 Shiann Haymaker of Covington tries to drive past Kiley White of Seeger. 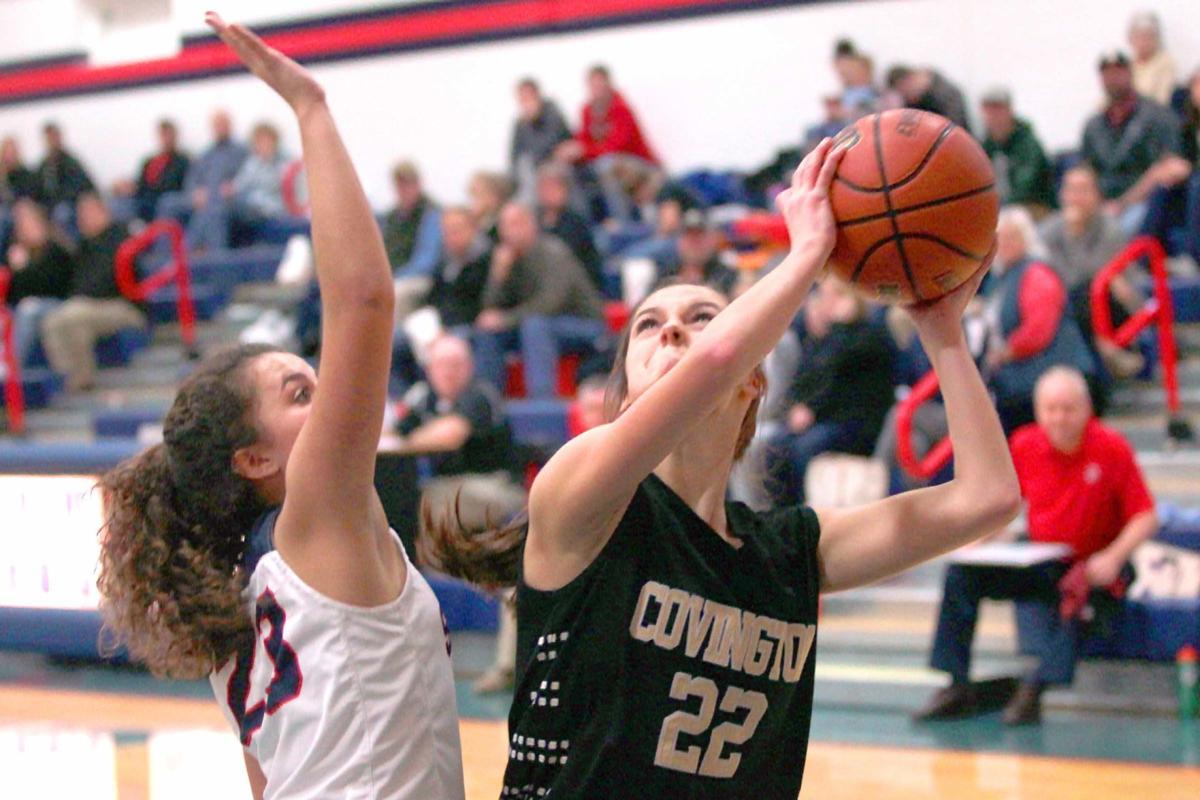 Hope Linville of Covington looking to put up a shot over Aubry Cole of Seeger. 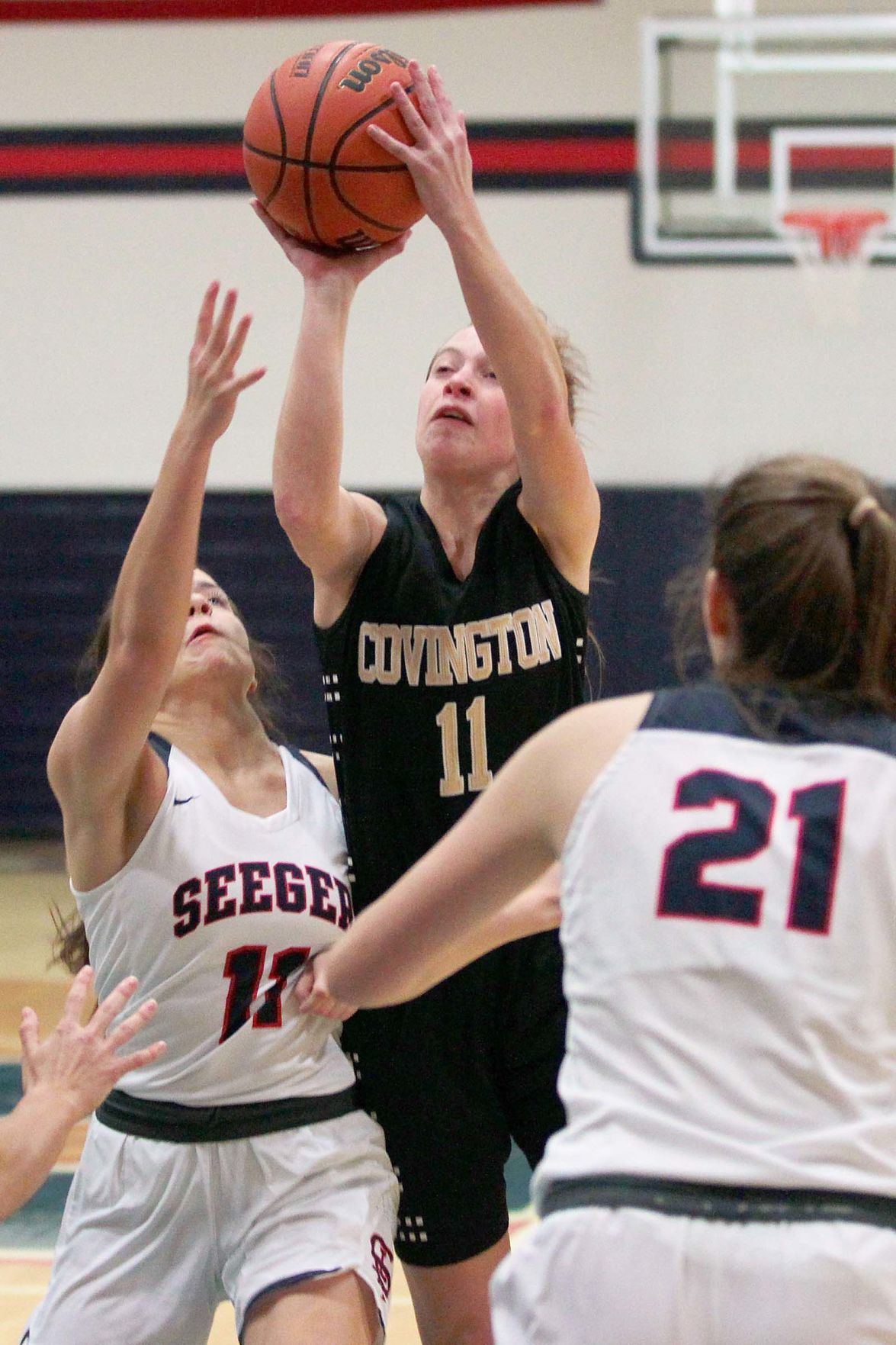 Reese Noble of Covington shooting a jumper over a pair of Seeger defenders. 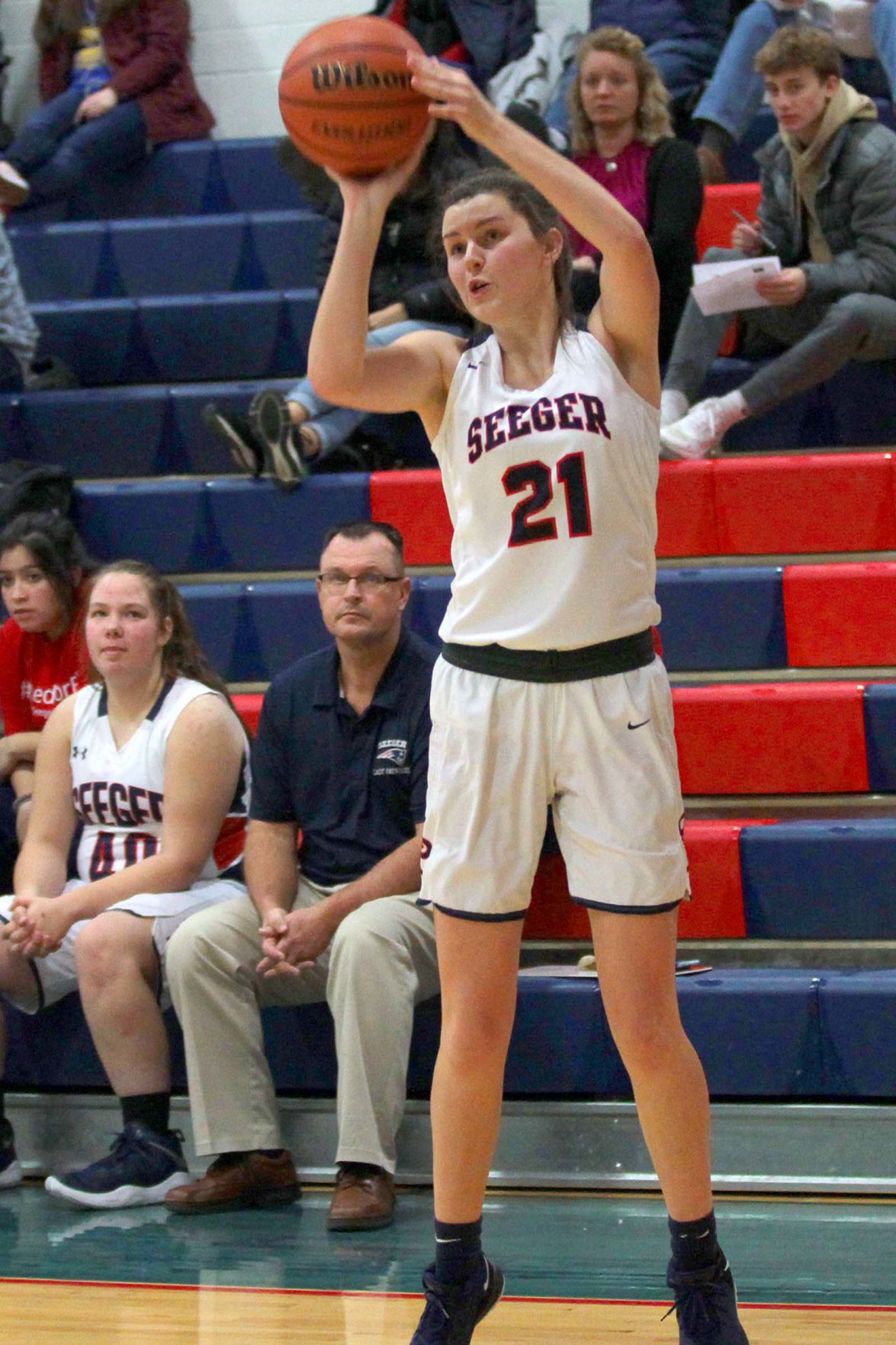 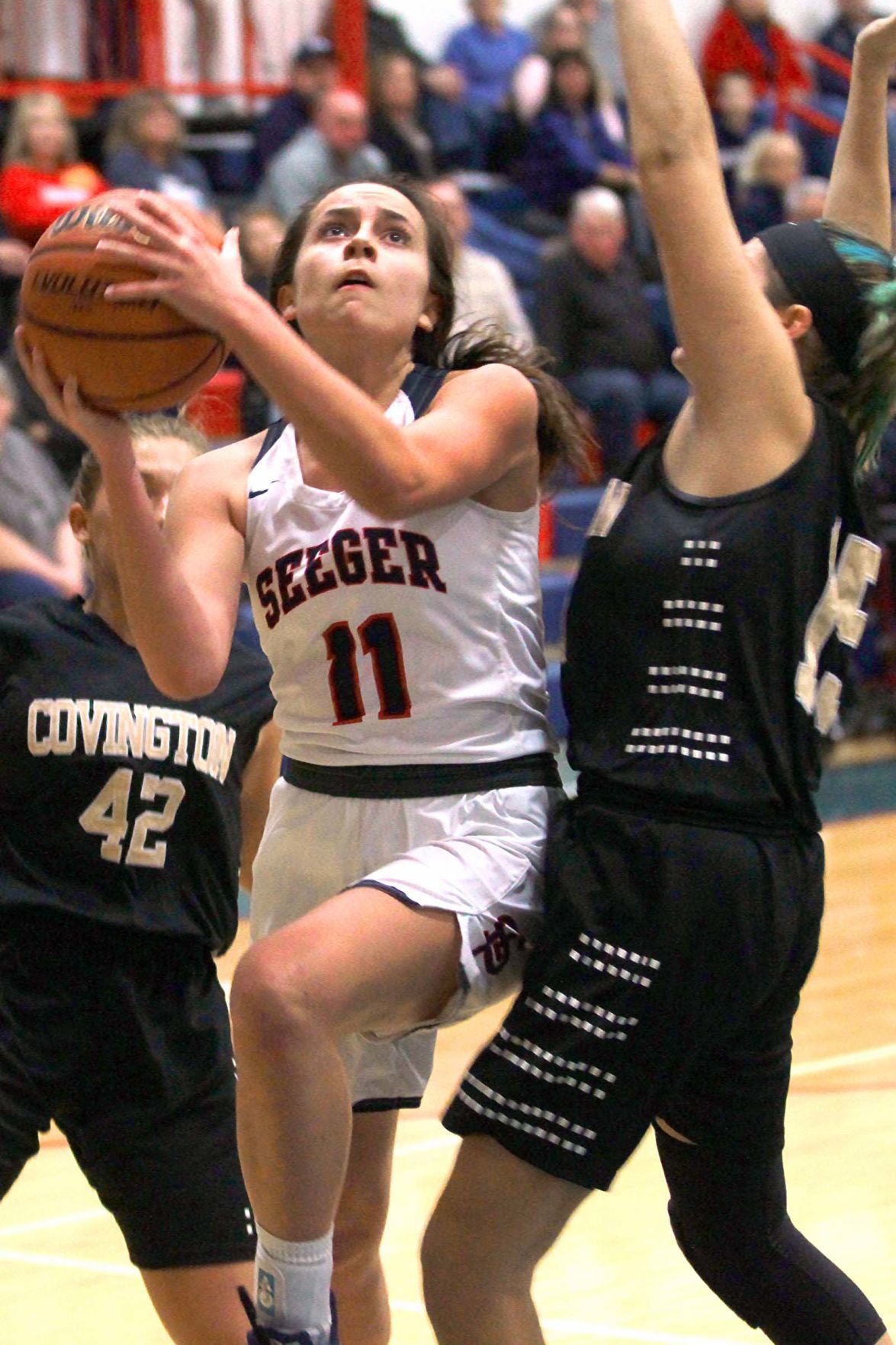 Kiley White of Seeger going up for a shot atgainst Shiann Haymaker of Covington. 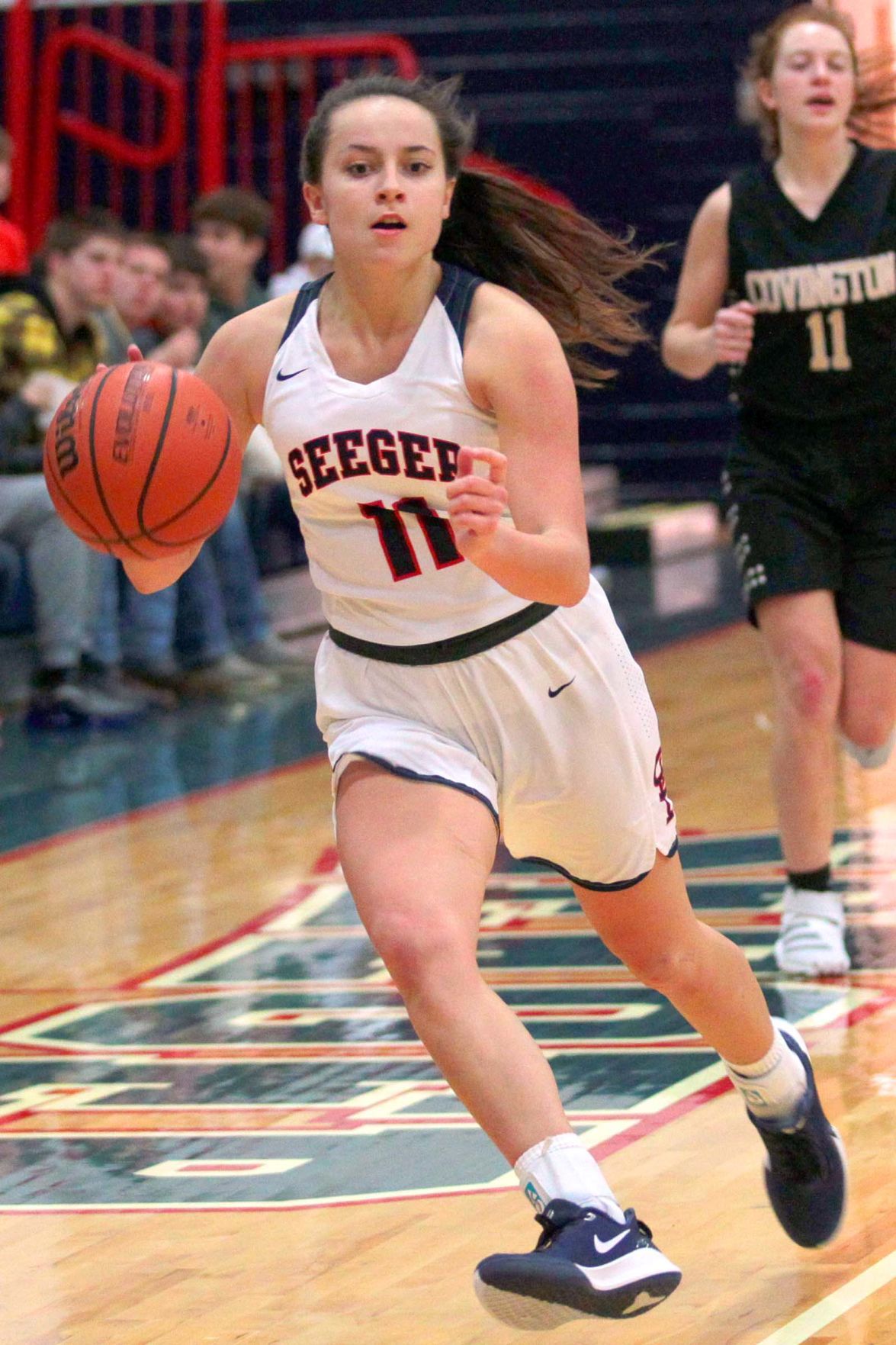 Kiley White of Seeger driving on a fast break.

Shiann Haymaker of Covington tries to drive past Kiley White of Seeger.

Hope Linville of Covington looking to put up a shot over Aubry Cole of Seeger.

Reese Noble of Covington shooting a jumper over a pair of Seeger defenders.

Kiley White of Seeger going up for a shot atgainst Shiann Haymaker of Covington.

Kiley White of Seeger driving on a fast break.

Fresh off their Bi-County Holiday Tournament championship, Seeger hosted Covington on Tuesday and came away with a 65-27 win over the Trojans.

The Patriots scored the first two points of the game about a third of the way through the first quarter on a basket by Riley Shrader, but defenses were dominant early and no one scored again until just under four minutes were gone.

Shrader added a free throw and then saw Briley Peyton of Covington make a three-pointer off an assist from Shiann Haymaker to tie the contest.

Seeger then ran off eight in a row, getting baskets from Emily and Riley Shrader along with Kiley White before Hope Linville ended the Patriot string with an offensive rebound putback.

Riley Shrader and White combined for four more points in the period while the Trojans mustered two from Abby Swaney to make it 15-7 after one quarter.

Offenses picked up a little as the second period began with Emily Shrader making a three-pointer and Haymaker matching it about a minute later.

Aubrey Cole followed those treys with a three-pointer of her own for Seeger and then, when Avery Cole made a lay-up, the Patriot lead was double-digits at 23-12.

After an Izzi Puterbaugh jumper made it a thirteen-point margin, Reese Noble made a trey for Covington to close the gap to ten at 25-15.

Once again, Seeger closed the period on a solid run including a trey from Aubry Cole, outscoring the Trojans 9-2 for a 34-17 halftime score.

Both of the first half runs came from Covington turnovers according to Trojan head coach Travis Brown, who explained, “Our turnovers led to runouts for them for easy lay-ups.”

After the intermission, Seeger picked up where they left off – attacking the basket.

Those drives allowed the Patriots to open the third quarter with four free throws, two lay-ups and a jumper before Noble stopped the string with a basket at the 3:25 mark for a 44-19 score.

Seeger then made a pair of treys, one from Aubry Cole and one from Puterbaugh, wrapped around a basket by Swaney for the Trojans to help the hosts continue to pull away.

Lauren O’Neill hit the final basket of period for Covington for a 50-23 score.

Covington managed four points in the fourth quarter on a trey from Haymaker early and a free throw from Chloe Morris almost at the horn while the Patriots were adding 15 to their total, including three pointers from Emily Shrader and White.

The latter player had come into the game needing 18 points to reach the 1000-point total for her career, but came up one short, scoring 17 and missing her last couple of shots as a Trojan box-and-one defense on her made those attempts come from well beyond three-point range.

Brown said he thought his team played “pretty good” defense, saying it was hard for his squad to deal with a patient Seeger offense that often took 45 or more seconds to get off a shot.

He concluded by saying that he was proud of the effort of his team and that they are getting better each game.

Looking ahead for Seeger, Patriot assistant coach Ralph Shrader said the next game for his team would be Clinton Prairie, a non-conference, but sectional foe.

“We’ll go over there and play to win,” he said, “but we won’t show them anything we’ll do in the sectional. We won’t give anything away.”