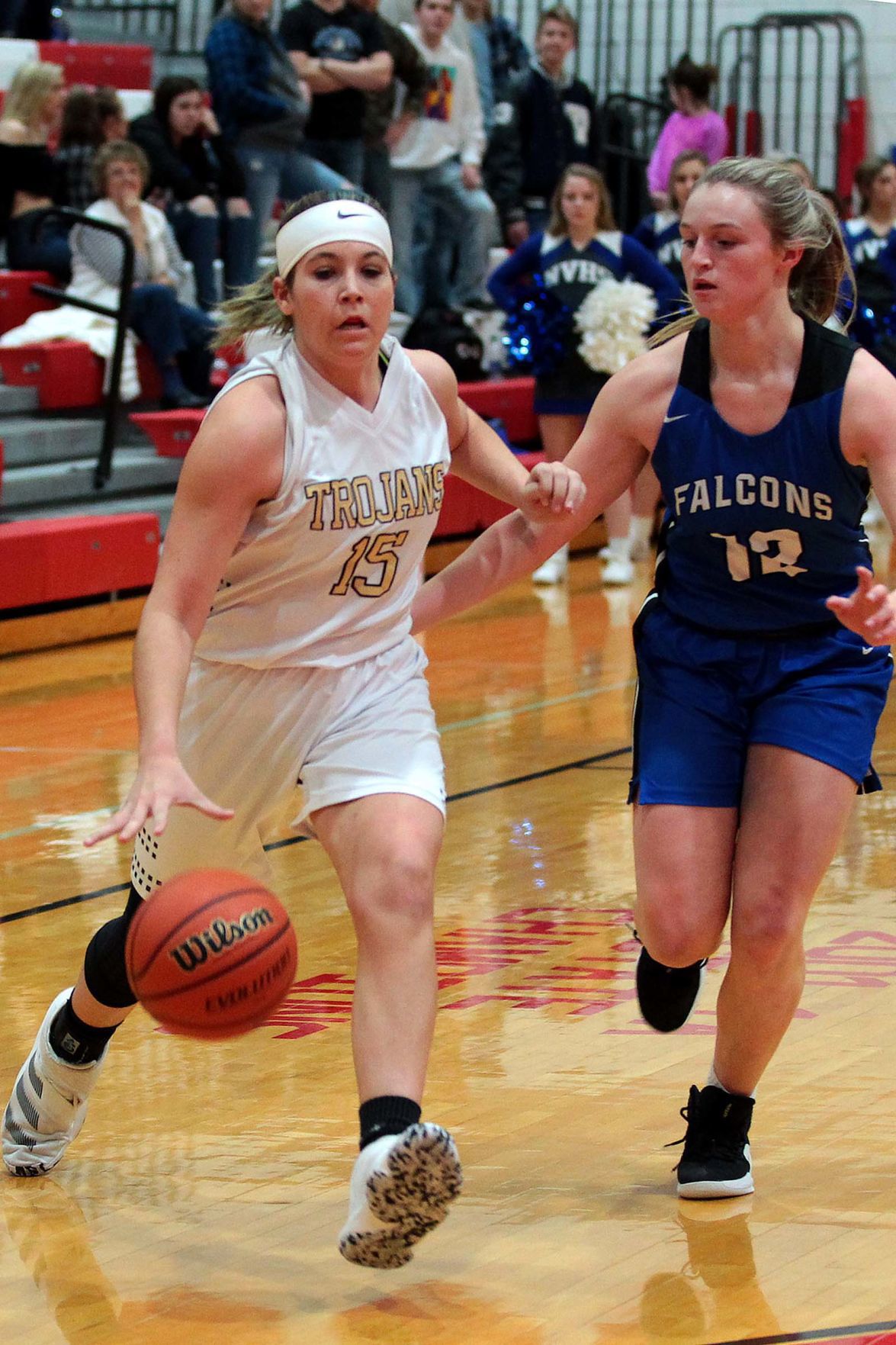 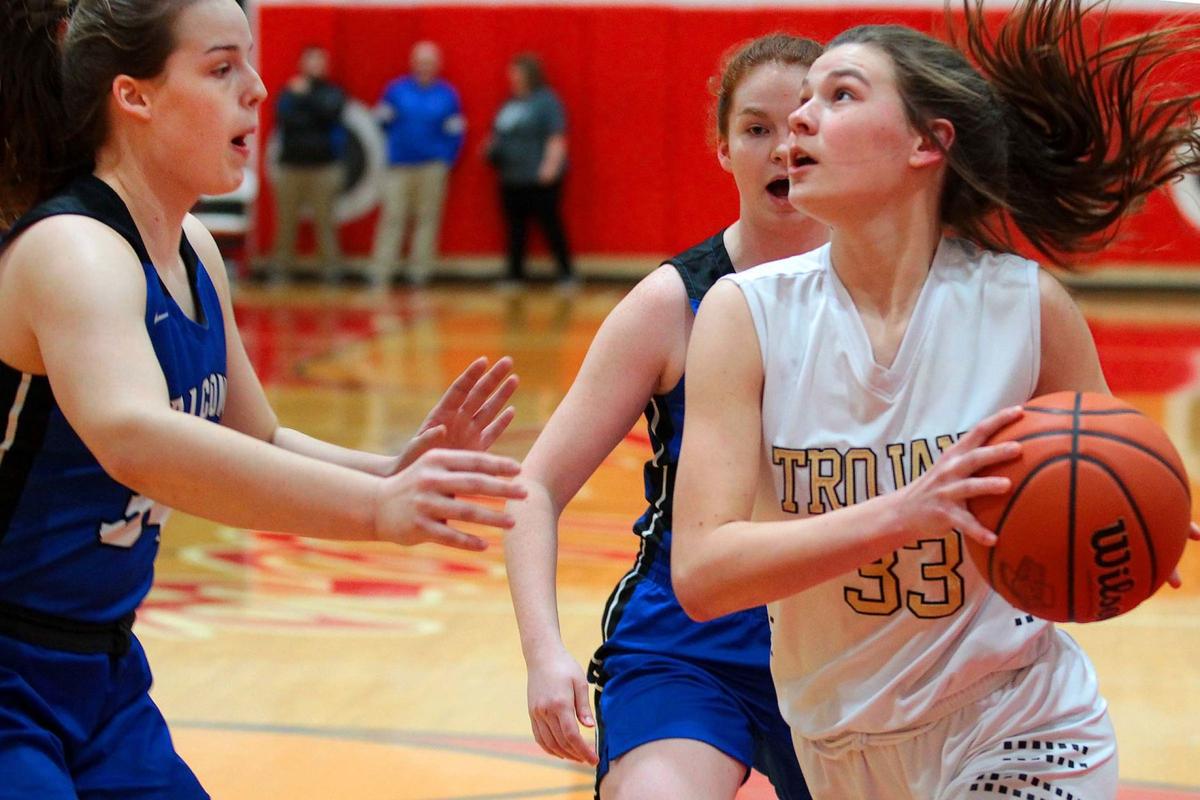 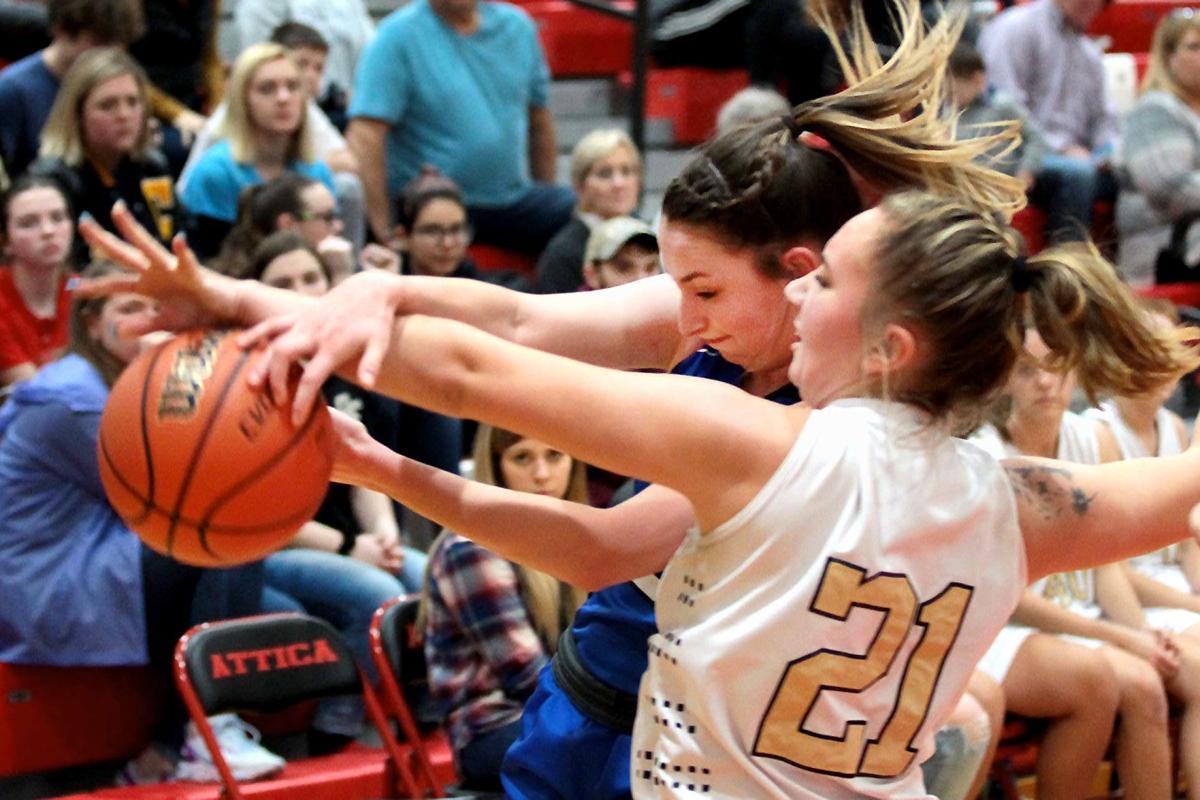 Madison Lawson and Rylee Dowers of North Vermillion battle for a loose ball. 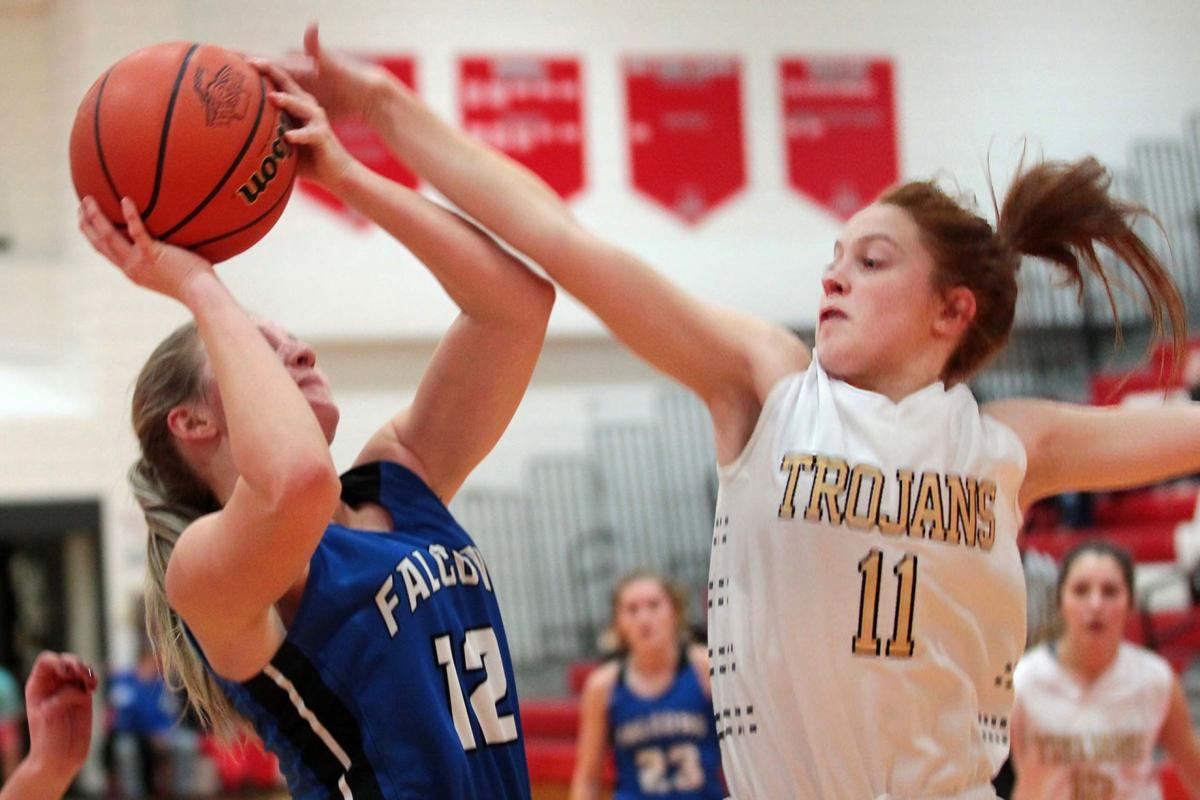 Reese Noble of Covington goes for a block on Ava Martin of North Vermillion. 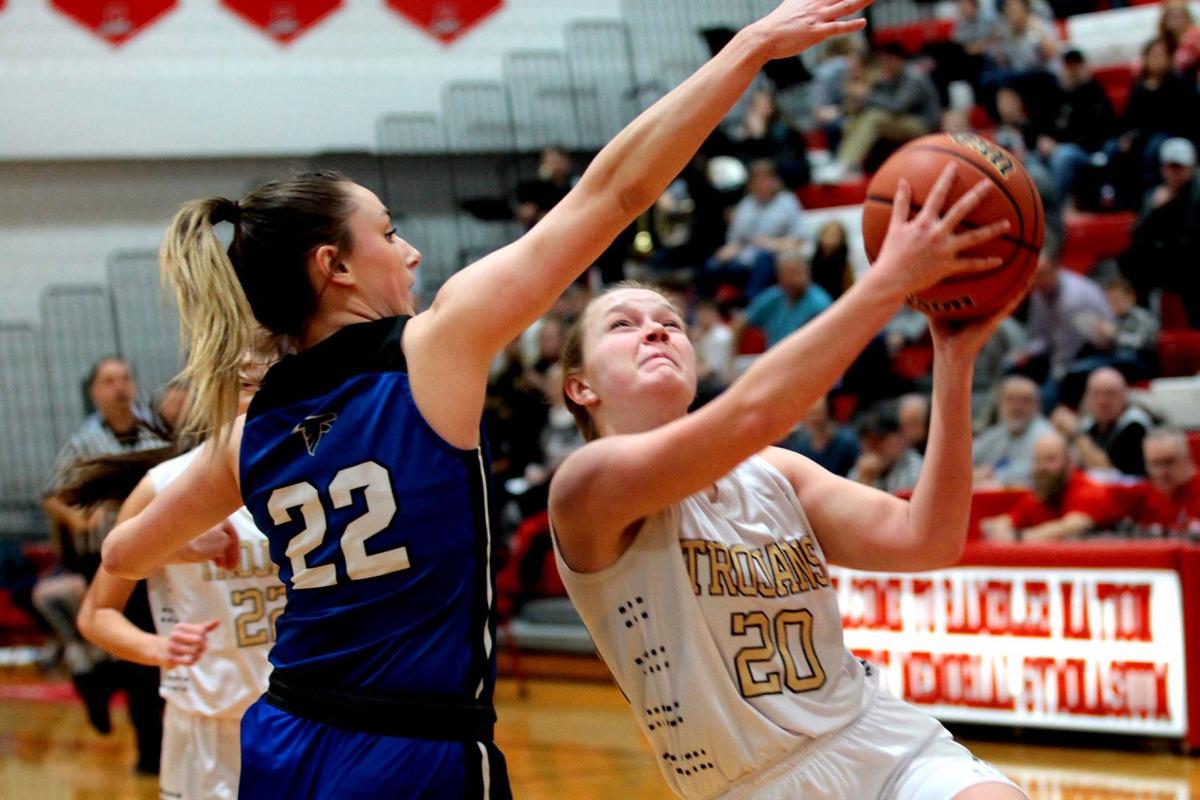 Abby Swaney of Covington goes for a lay-up against the defense of Rylee Dowers of North Vermillion. 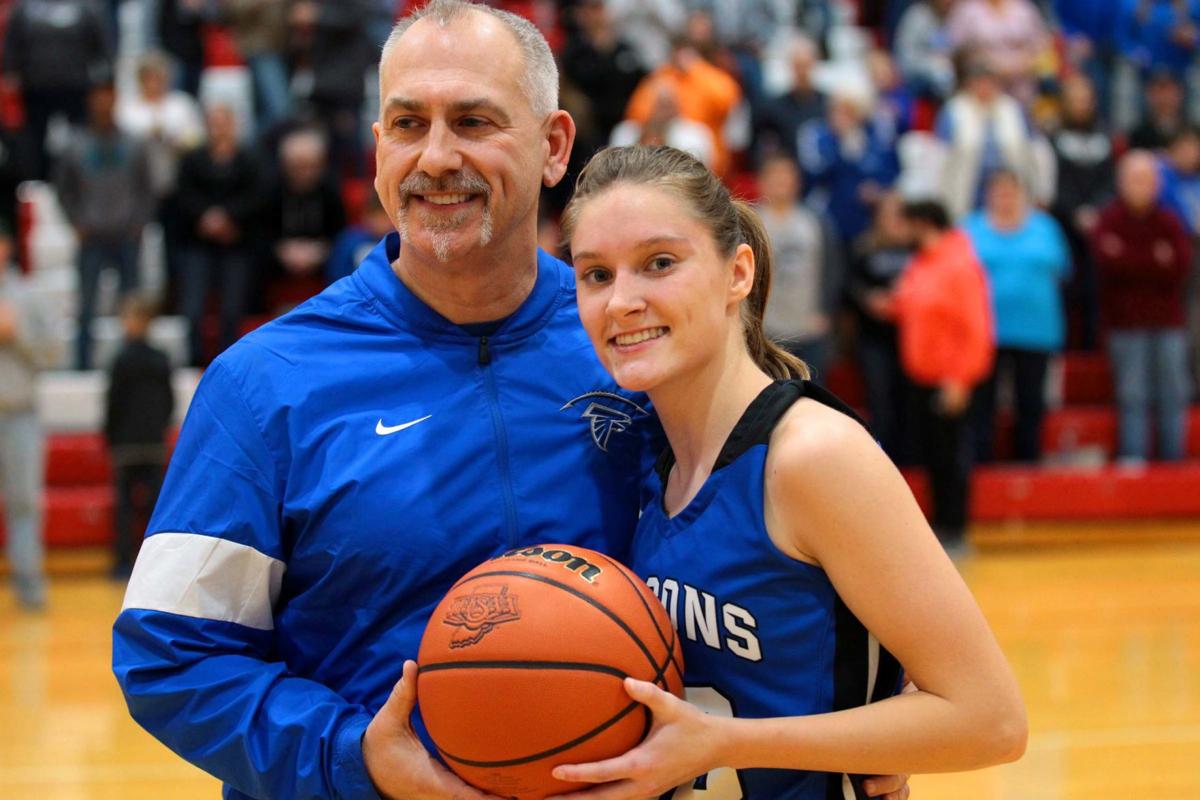 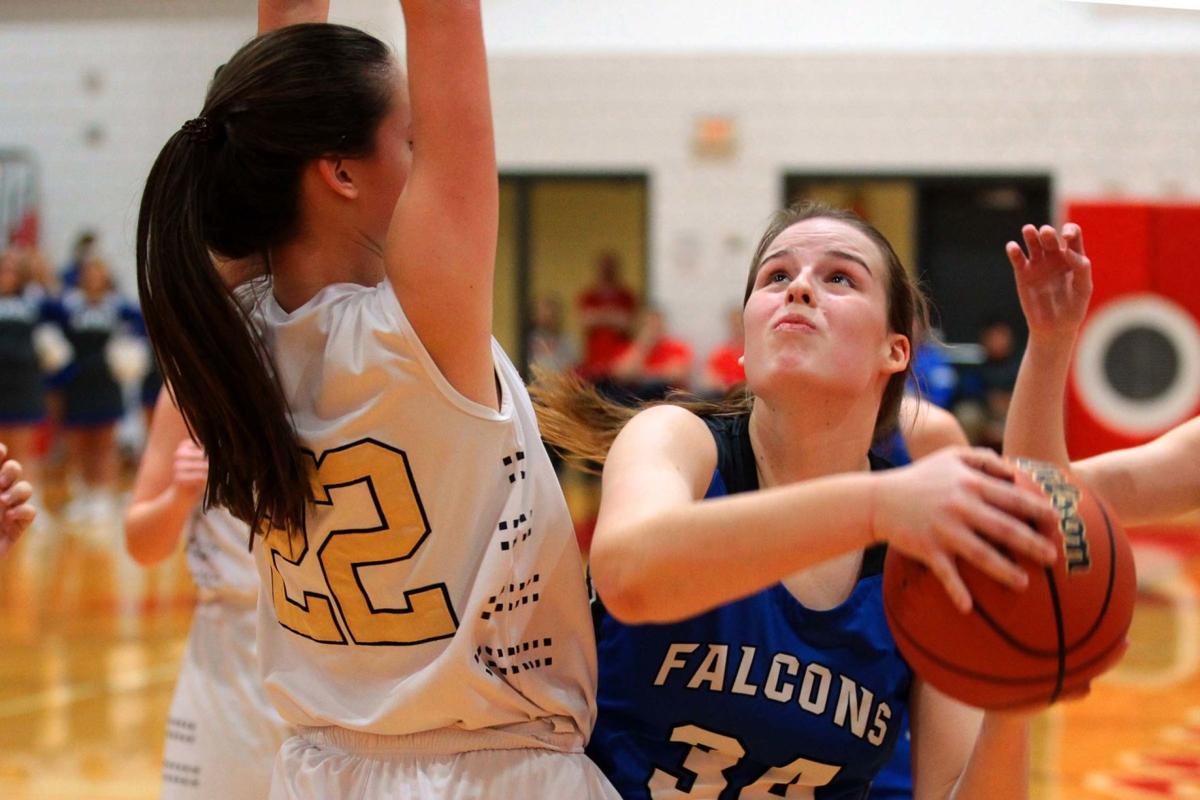 Hannah Ellis of North Vermillion looks to go up for a shot against Hope Linville of Covington. 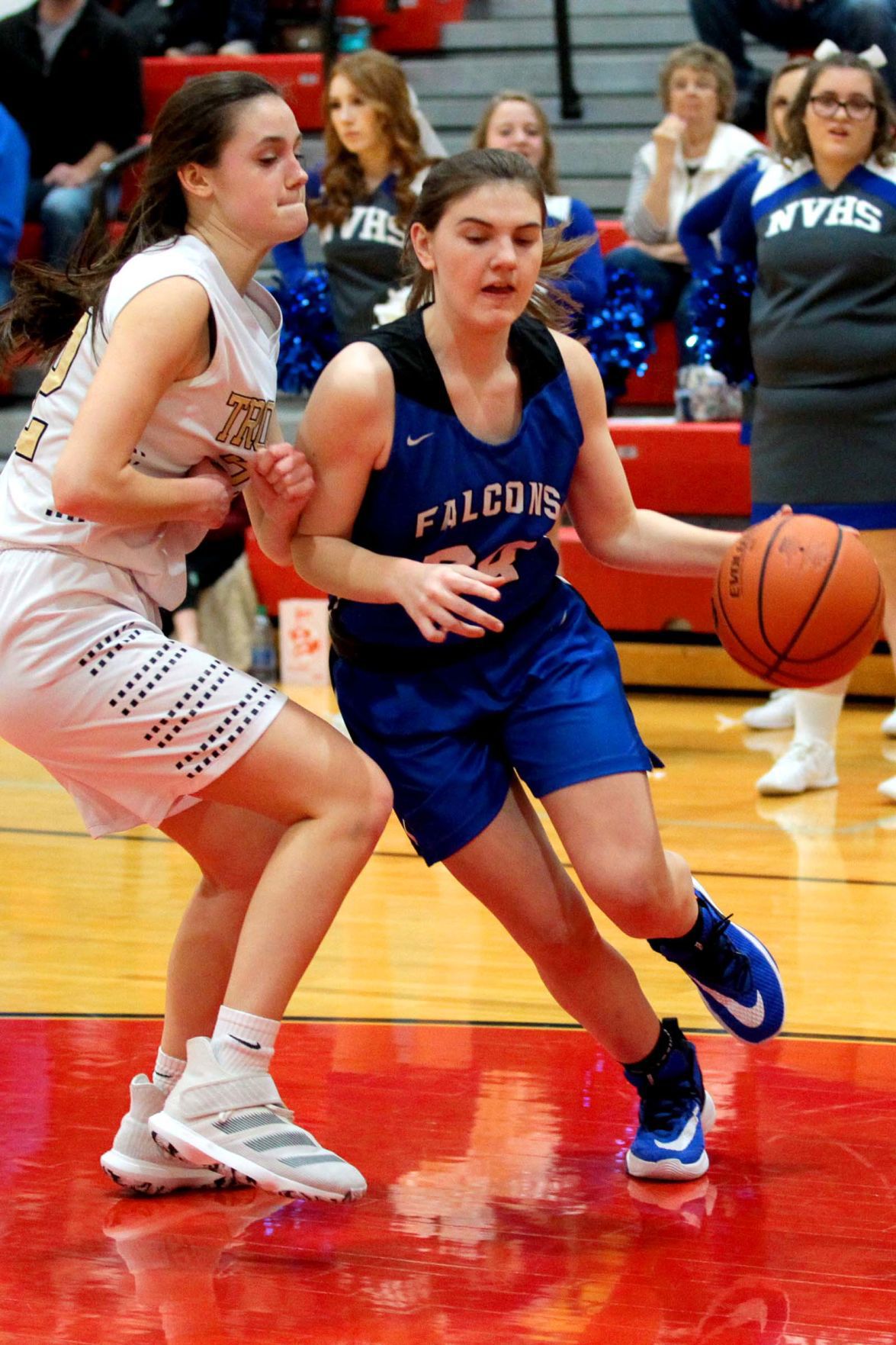 Cami Pearman of North Vermillion drives into the paint against Hope Linville of Covington.

Madison Lawson and Rylee Dowers of North Vermillion battle for a loose ball.

Reese Noble of Covington goes for a block on Ava Martin of North Vermillion.

Abby Swaney of Covington goes for a lay-up against the defense of Rylee Dowers of North Vermillion.

Hannah Ellis of North Vermillion looks to go up for a shot against Hope Linville of Covington.

Cami Pearman of North Vermillion drives into the paint against Hope Linville of Covington.

North Vermillion and Covington met for the second time in two weeks when they clashed in a semifinal of the 1A Sectional 54 held at Attica.

In their first meeting, the host Falcons defeated the Trojans by seven points, but this sectional meeting would be far closer.

When it was over, after Covington missed a three-quarter court shot for the win, North Vermillion came out on top 41-39 in a game that both teams had chances to put away, but could not.

The Falcons hit the first basket of the game, but Shiann Haymaker responded with a trey for Covington after which Abby Swaney scored on a lay-up and then made two free throws for a 7-2 lead for the Trojans.

Rylee Dowers then converted a steal into a basket for North Vermillion, but Hope Linville fed Reese Noble for a three-pointer for a 10-4 score.

The Falcons responded with a 6-2 burst to close the quarter, getting baskets from Brianna West, Ava Martin and Dowers against only a single lay-up by Linville.

Down two at 12-10 going into the second period, North Vermillion went to the line missing both free throws, but got a putback by Hannah Ellis to tie the contest.

Martin hit a lay-up and McKenzie Crowder connected on a trey to flip the game in matter of minutes from a six-point Trojan lead to a five-point Falcon lead.

Covington came right back with eight points, including a pair of baskets by Holly Linville for a 20-17 lead before Cami Pearman made two free throws for North Vermillion to make it a one-point game at 20-19 going into the intermission.

Things slowed down in the third quarter as the teams could only make a basket each in the first two minutes.

The Trojans went up 27-21 at the 3:01 mark after a jumper and a three-point play, but the final three minutes saw Briley Peyton make two free throws for Covington while the Falcons were getting baskets from Crowder and Martin to pull within three, 29-26, by the end of the period.

The fourth quarter started much as had the third, with no one scoring for almost two minutes until

Dowers made a putback for the Falcons.

Covington extended their lead to four on a trey from Noble, but Dowers countered with one for the Falcons to make it 32-31 with 6:12 left in the game.

It took another minute before anyone scored again with Crowder ending the drought with a lay-up off a feed from Dowers to put North Vermillion back on top by one.

Dowers followed with a pair of free throws 30 seconds later for a 35-32 lead and then it would be 90 seconds before there was another score – a free throw from Haymaker of Covington.

It would be another 90 seconds until the score changed again as Hope Linville scored for Covington to tie the contest at 35-all.

The Falcons then missed a free throw but Noble of Covington made one with 50 seconds left to put the Trojans up 36-35.

North Vermillion then missed a good shot but Martin rebounded and put it back in with 26 seconds left for a 37-36 score.

The play that was the key to the Falcon win followed when Crowder stole the ball, made a lay-up and the ensuing “and-one” free throw for a 40-36 score – making it a two-possession game – that also happened to include the 1000th point of her career with 14 seconds left in the contest.

After a timeout, Covington got the ball to Haymaker who hit a three-pointer with four seconds left for a 40-39 score.

North Vermillion inbounded and the Trojans immediately fouled with 2.7 seconds left and sent Dowers to the line where she made one of two free throws for a 41-39 score.

She missed the second free throw but it was ruled that there had been a lane violation and the ball was given to Covington under the Falcon basket.

Travis Brown, the Trojan head coach, called a timeout to give his team a play to run for the final shot of the game.

The team made two passes, both caught against tight Falcon pressure, with the ball ending in the hands of Noble at three-quarter court from where she had no choice but to heave the ball in the general direction of the basket.

The shot was short and off to the left meaning the Falcons picked up the win 41-39.

“Wow!” was the first word to come out of the mouth of Falcon head coach Mark Switzer in his post-game interview and then adding, “We knew it would be a battle, but we hoped it wouldn’t be this close.”

Switzer said his team did not match up well with Covington and that his squad had to “pick up the defensive pressure in the second half to try to force turnovers to get the win.”

Brown could only praise his team, saying they had peaked at the right time of the year and that they had done everything he had asked them to do.

“I don’t know if we could have played any better,” he said, “but I’m proud of the team and the effort they made.”

With the loss, Covington ended the season with a 7-18 record while North Vermillion moved on to face Clinton Central for the sectional championship.

A mix of clouds and sun in the morning followed by cloudy skies during the afternoon. High 66F. Winds S at 5 to 10 mph.