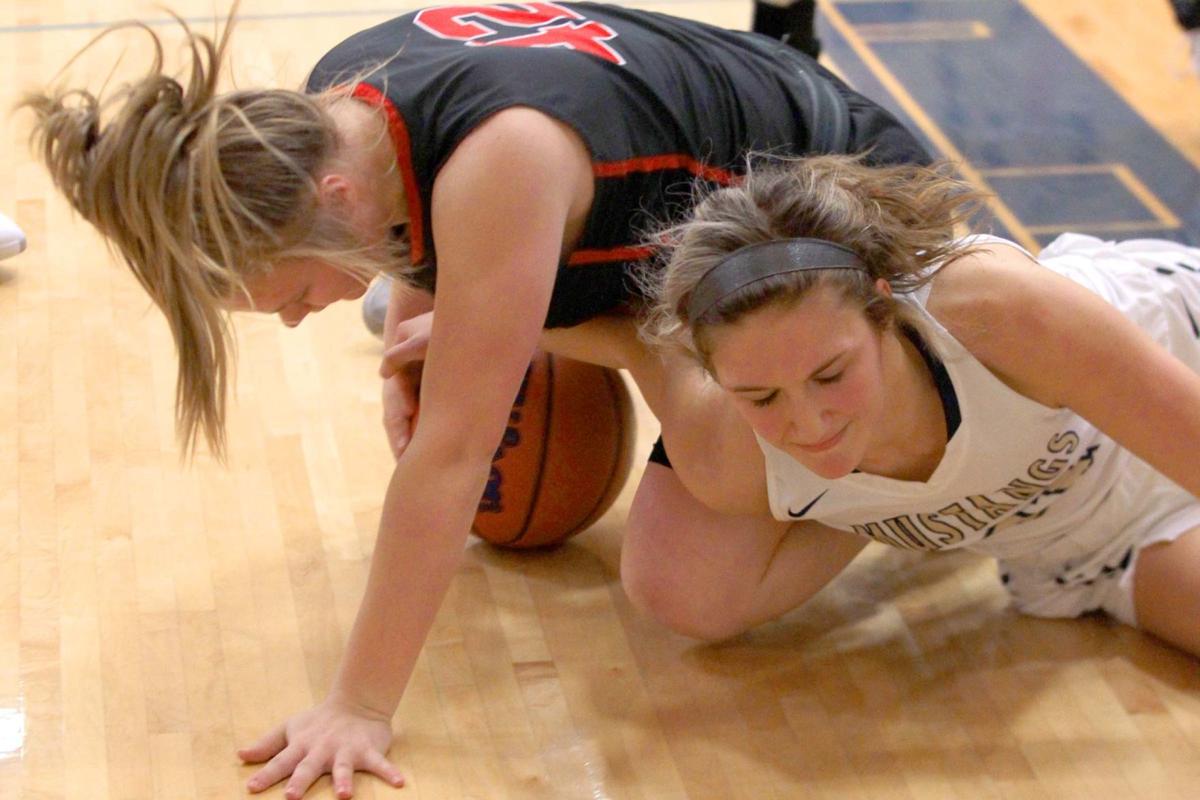 Dakota Borman of Fountain Central and Hadley Wilson of Clinton Prairie battle for a loose ball. 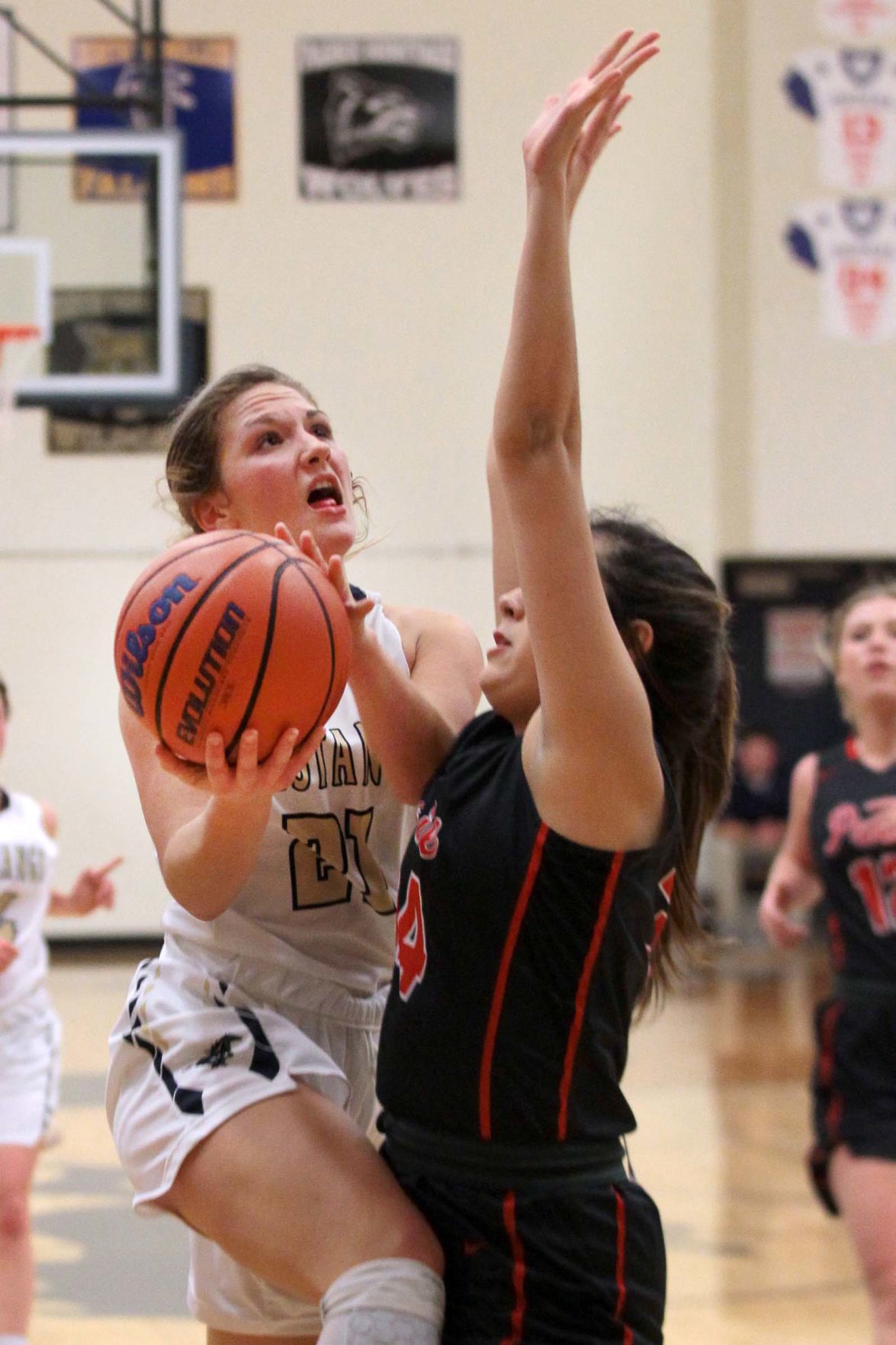 Dakota Borman of Fountain Central goes up for a lay-up. 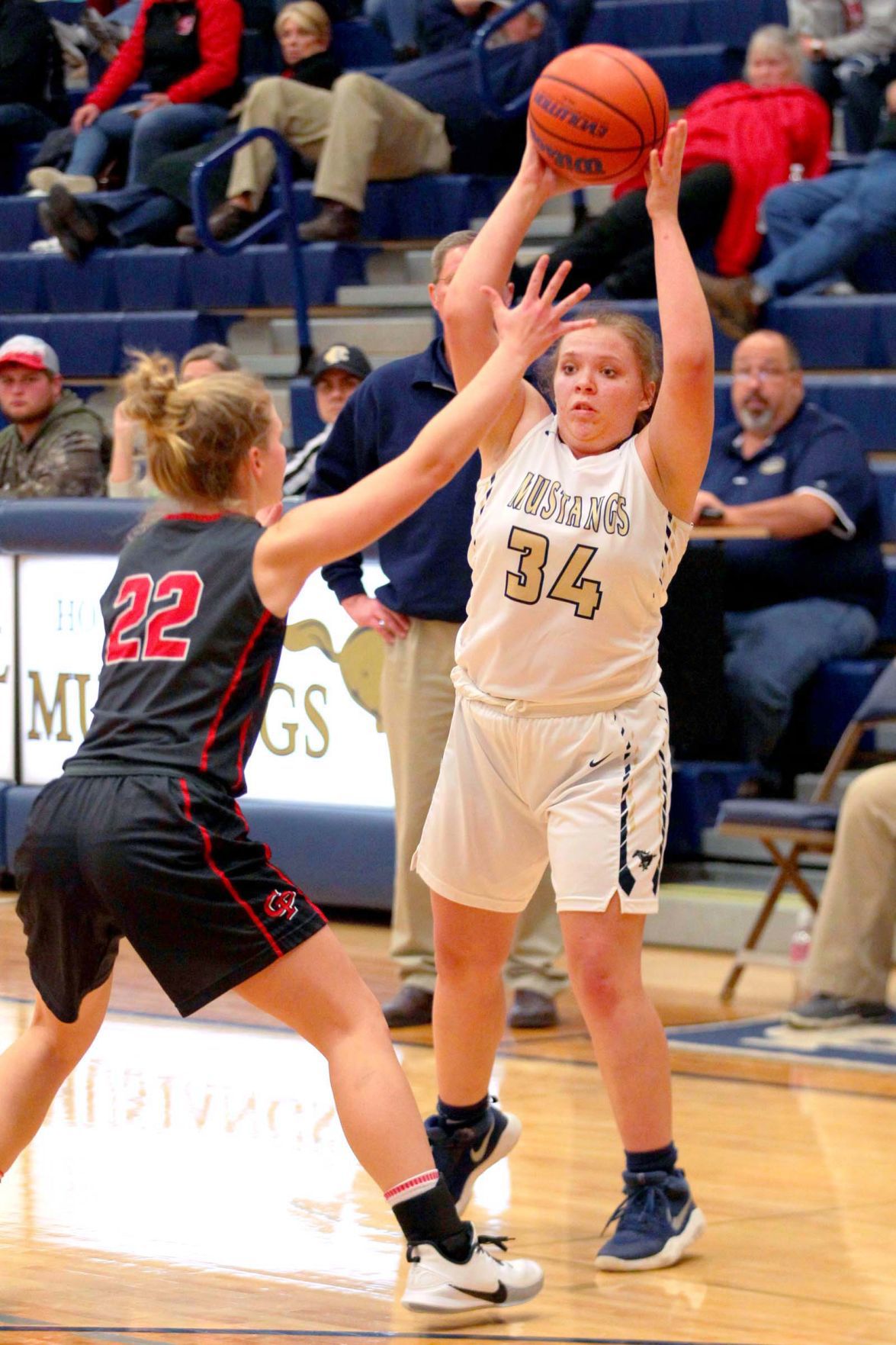 Audri Eades of Fountain Central passes into the paint before Kylie Maish of Clinton Prairie can close on her. 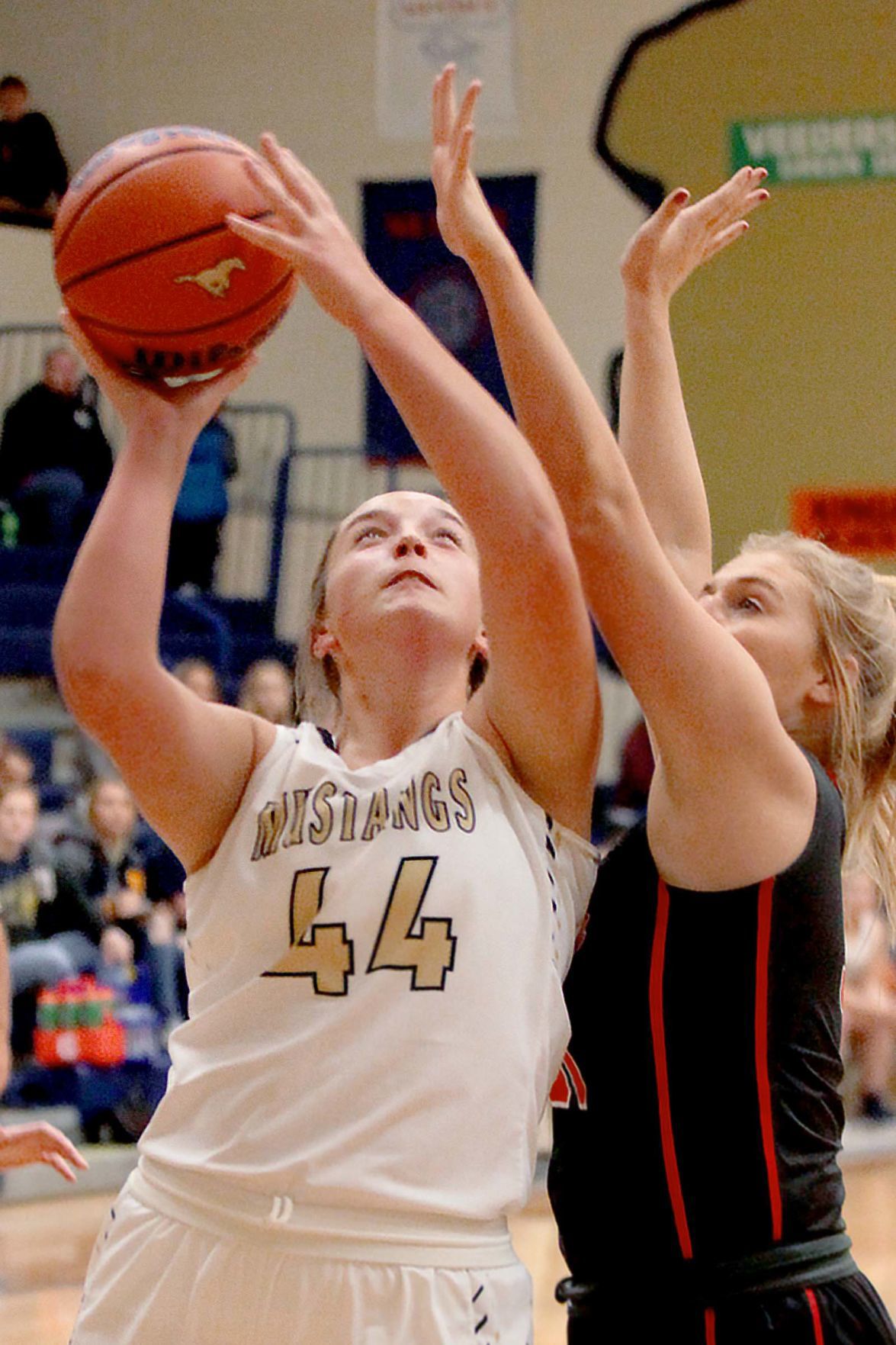 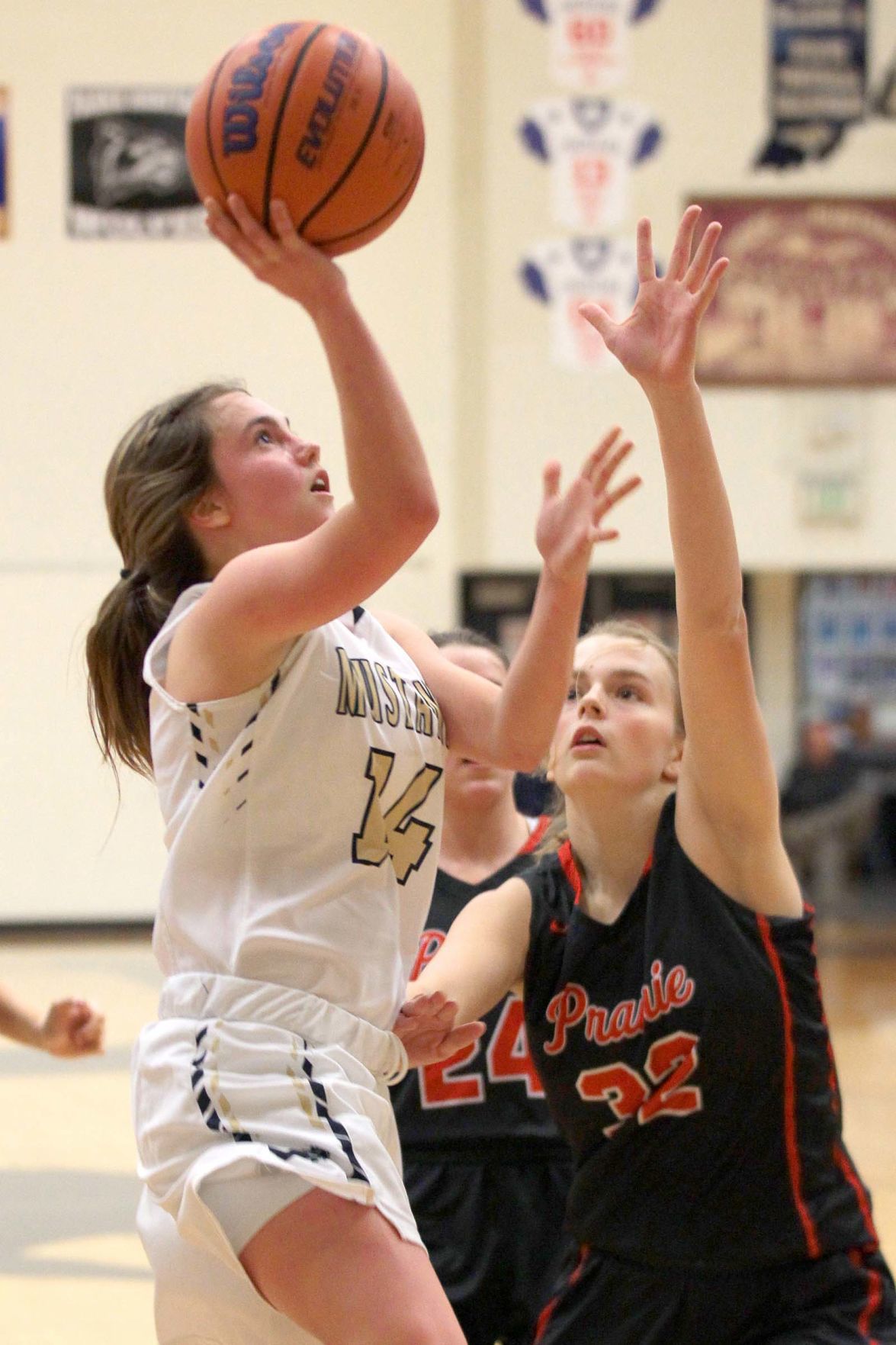 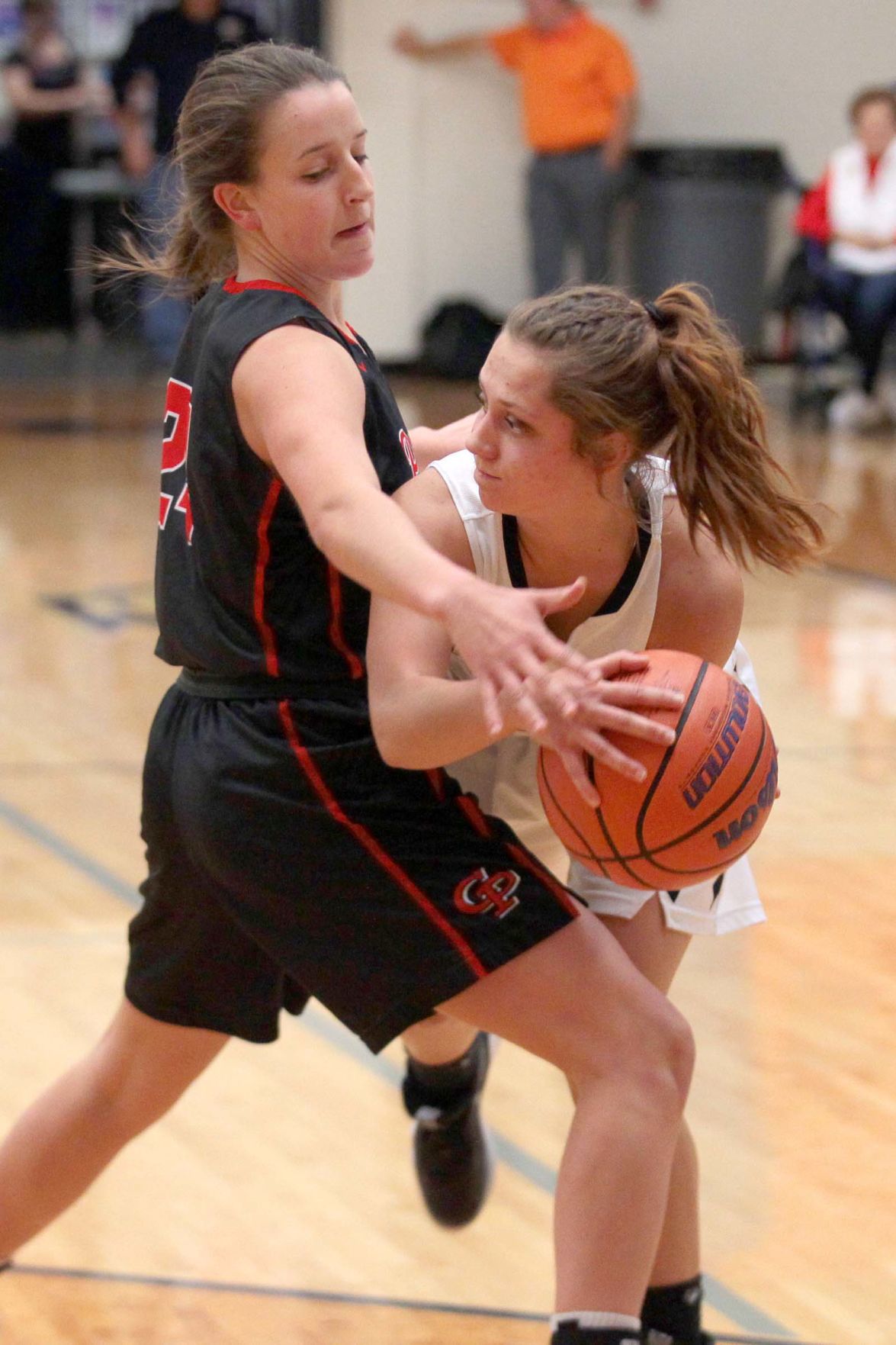 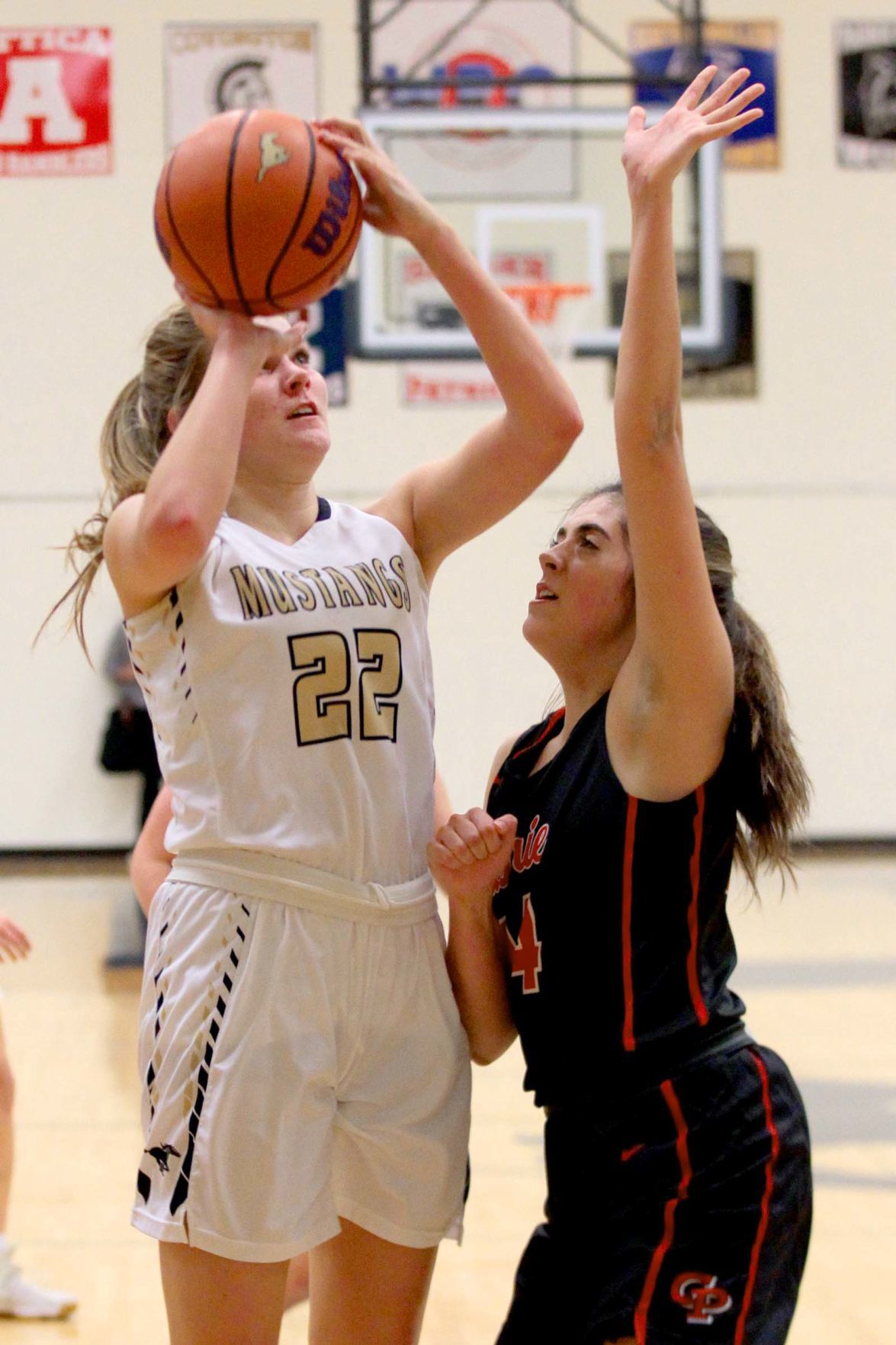 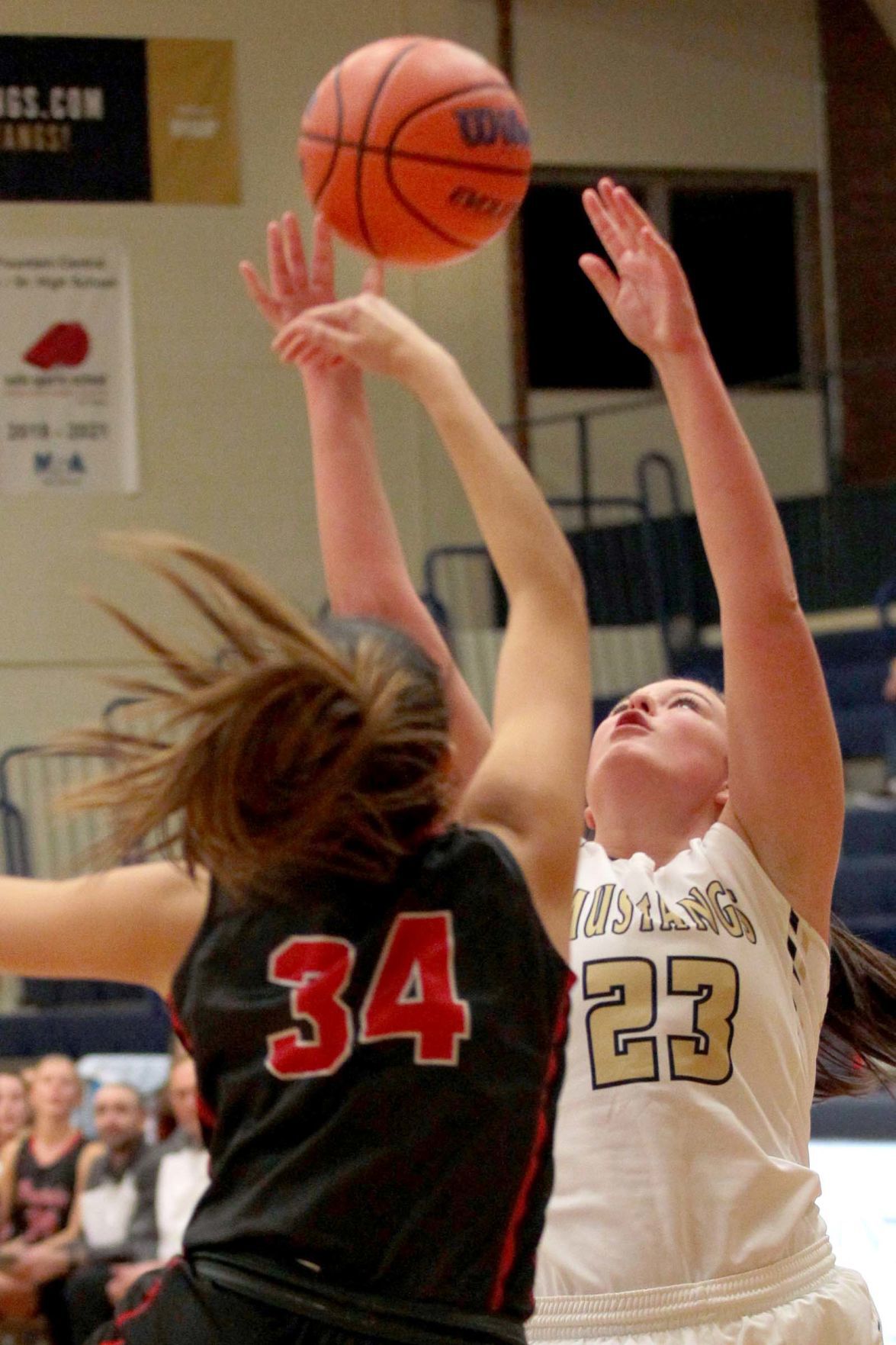 Dana Sanders of Fountain Central shoots a short jumper as Haley Padgett of Clinton Prairie goes for a block. 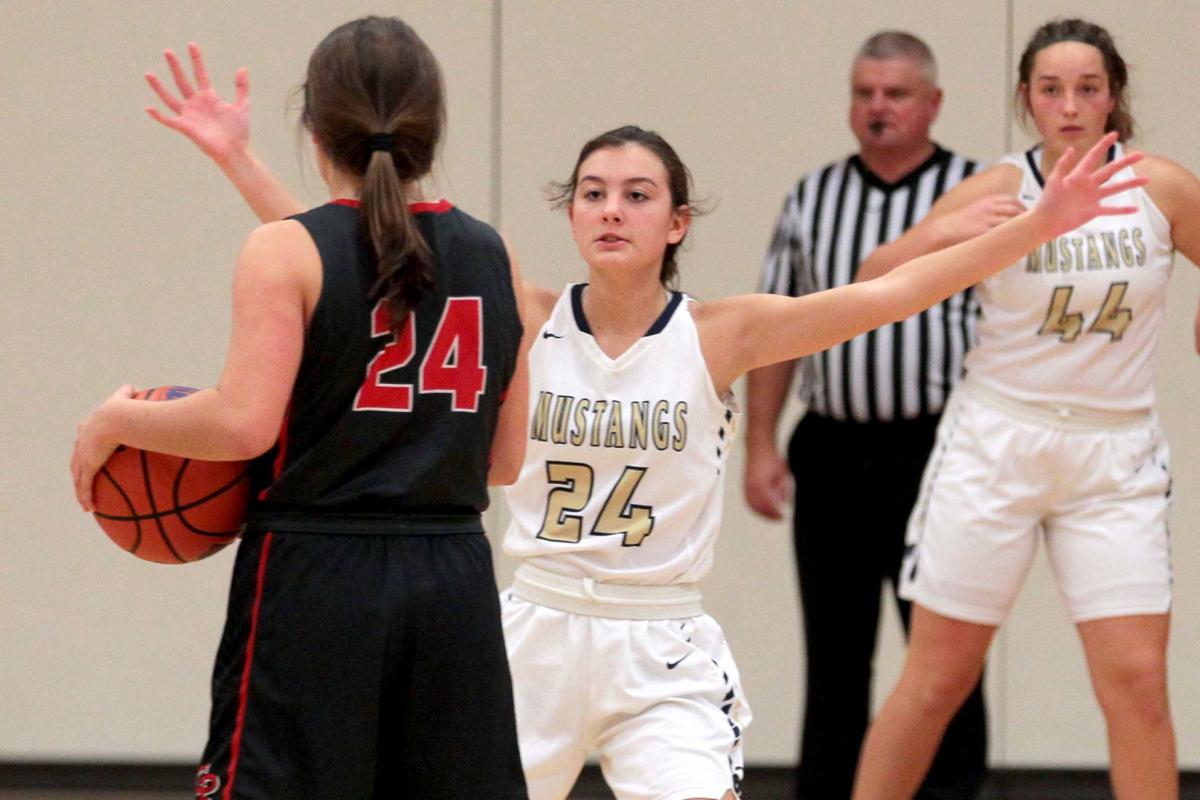 Gwen Sandlin of Fountain Central guards Tynlie Neal of Clinton Prairie as the Mustangs were in a zone defense.

Dakota Borman of Fountain Central and Hadley Wilson of Clinton Prairie battle for a loose ball.

Dakota Borman of Fountain Central goes up for a lay-up.

Audri Eades of Fountain Central passes into the paint before Kylie Maish of Clinton Prairie can close on her.

Dana Sanders of Fountain Central shoots a short jumper as Haley Padgett of Clinton Prairie goes for a block.

Gwen Sandlin of Fountain Central guards Tynlie Neal of Clinton Prairie as the Mustangs were in a zone defense.

Fountain Central hosted Clinton Prairie in girls’ basketball on Thursday night and the game marked the return to the floor for former Mustang coach Amie Anthrop for the first time in three years.

She brought with her the same aggressive offense and newer defense than she had used when she coached locally from 2012-16, but this time she was seated on the opposite bench.

“It was surreal,” Anthrop said. “There were times when I wanted to move over next to Tom [Anderson, the current Mustang coach] on his bench. It all started here for me (at Fountain Central) and I will always appreciate the opportunity they gave me.”

Anthrop’s Gophers came out in a press and the inexperienced Mustangs had difficulty coping, turning the ball over repeatedly, which led to Clinton Prairie baskets.

The visitors opened an 8-0 lead and it was just over five minutes into the game when Gracie Foxworthy made a lay-up to put Fountain Central on the scoreboard.

Dakota Borman hit one of two free throws, but that was the only other Mustang point in the period as the hosts trailed 14-3 after one quarter.

Things got worse for Fountain Central in the second period as the Gophers began to find their three-point shooting eyes, connecting on three of them in route to a 40-8 halftime lead.

In that second period, the Mustangs got two baskets by Jerzi Hershberger with both coming off assists from Marley Massey along with a free throw by Reagan Oswalt.

After the halftime break, Anthrop cancelled the press, but the visitors still played solid defense, albeit while getting into team foul trouble.

The Mustangs could not take advantage of the fouls as the team went 6 for 21 from the line over the span of the game.

To open the scoring for Fountain Central in the third quarter, Massey hit one of two free throws, but the team did not score again until there was only about a half-minute left in the period when Borman made a lay-up for a 57-11 score.

In the final period, Foxworthy made a pair of free throws, Borman made a lay-up and a free throw to give the Mustangs their 16 points against 65 by the Gophers.

Fountain Central head coach Tom Anderson is in his third season as he tries to rebuild a program that was hard hit by graduation a few years ago.

Anthrop could relate to his struggles as she went 5-16 her first year at Fountain Central and did not have a winning season until her third one at the school, but she said there is potential for development in the Mustangs.

“They have one thing that a lot of teams at this level (1A) don’t have and that’s height,” she explained. “Once they get settled in and figure out how to get the ball inside, I think they’ll be fine. They made some good plays out there.”

The Mustang frontcourt has Oswalt at 5-11 and Foxworthy and Dana Sanders at 5-10 with the trio showing why height matters.

Oswalt blocked three shots and Foxworthy and Sanders got four and six rebounds, respectively, in the game with 5-7 Borman leading the way in clearing the boards with eight.

The key as Anthrop mentioned will be getting the ball to them offensively and that is where a lack of size at the guard position was a problem on Thursday.

The starting Fountain Central backcourt, Massey and Hershberger, are 5-0, meaning they faced Gopher guards that had at least a seven-inch height advantage over them depending on the defensive rotation.

The Mustang duo had a quickness advantage over their opponents and they tried to use it throughout the game, but the height difference often hurt them as their opponents either trapped them between two defenders in the press or blocked their shots on fast breaks.

One thing that was obvious was the enthusiasm and effort that all the Fountain Central players showed as they battled throughout the game despite the score and that bodes well for the potential development about which Anthrop spoke.

The Mustangs turn around and face another Clinton County team on Saturday as they host Frankfort in their second game of the season.

A mixture of rain and snow showers. Temps nearly steady in the mid to upper 30s. Winds SSE at 5 to 10 mph. Chance of precip 60%.