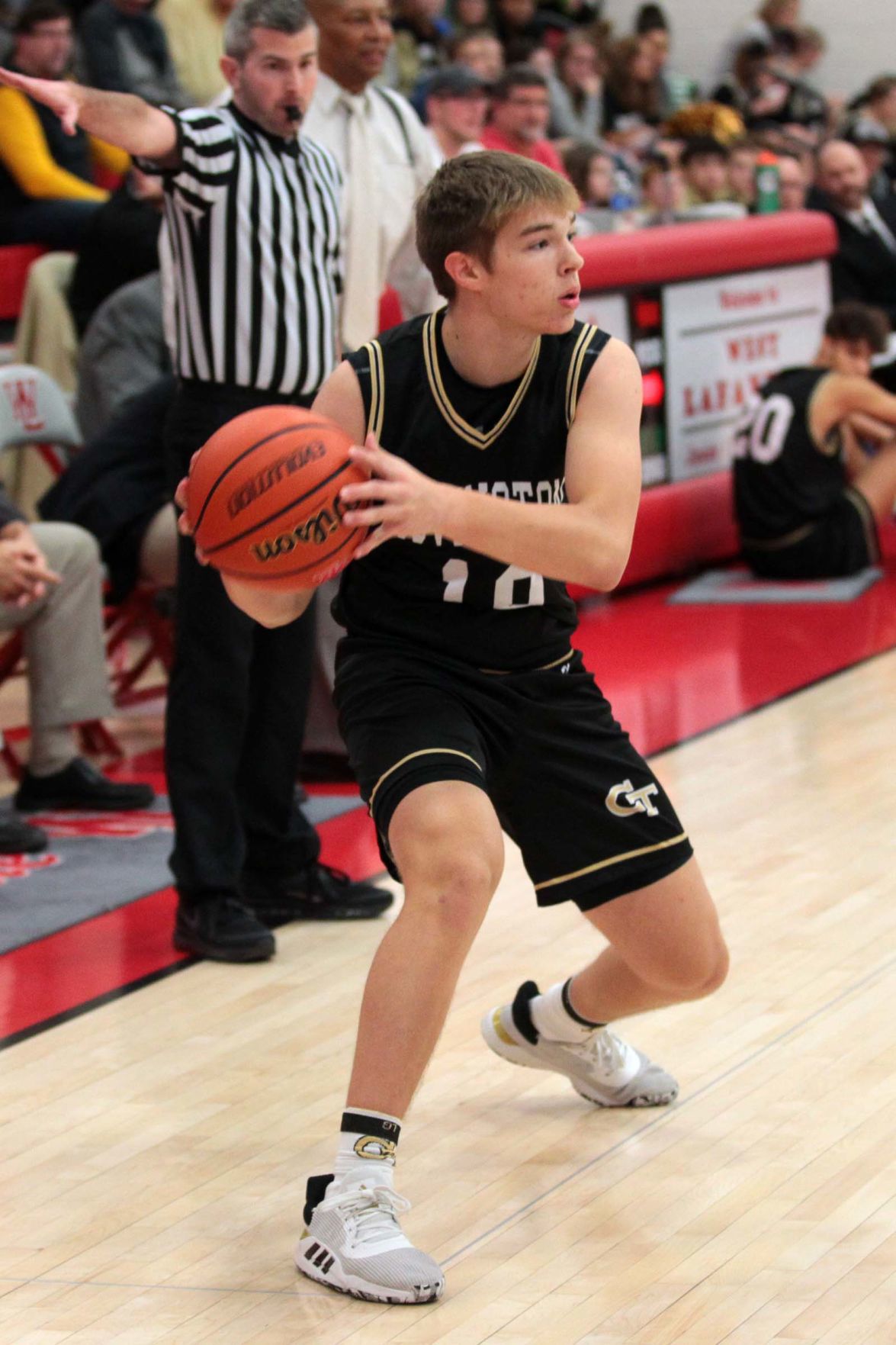 Trey Bever of Covington looks to pass in the first quarter. 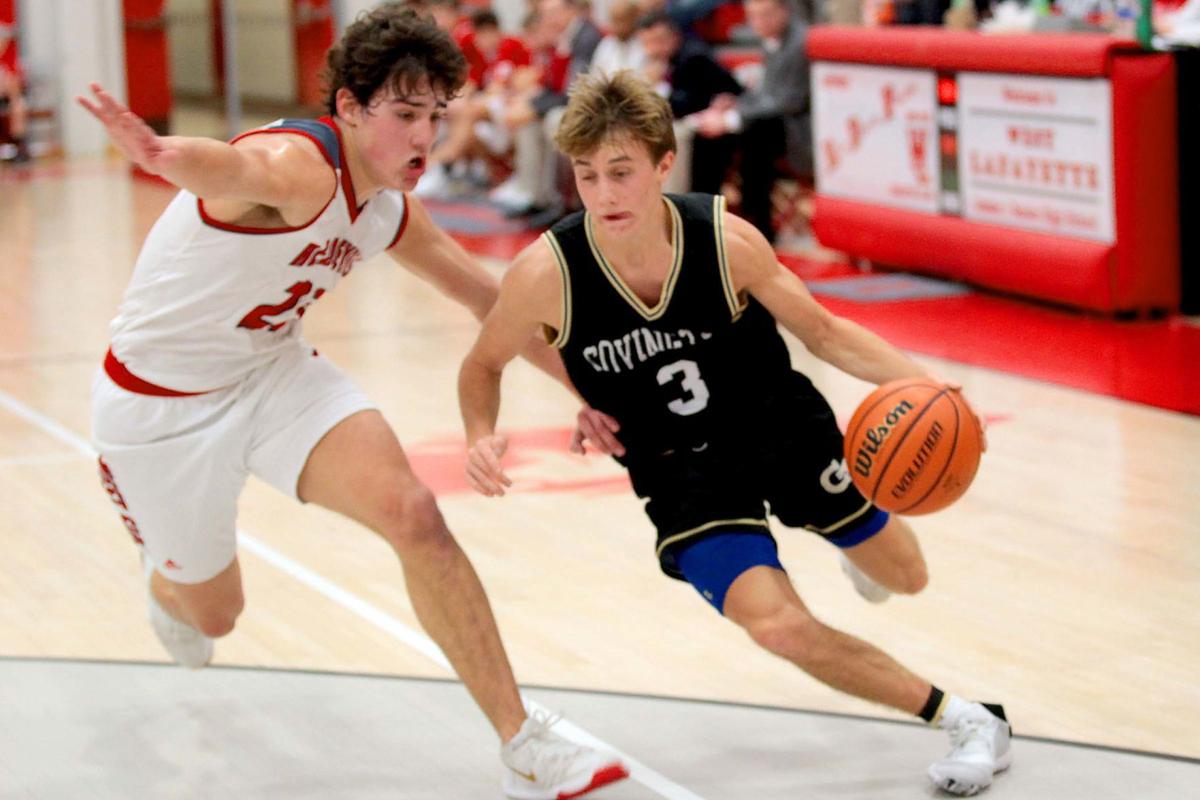 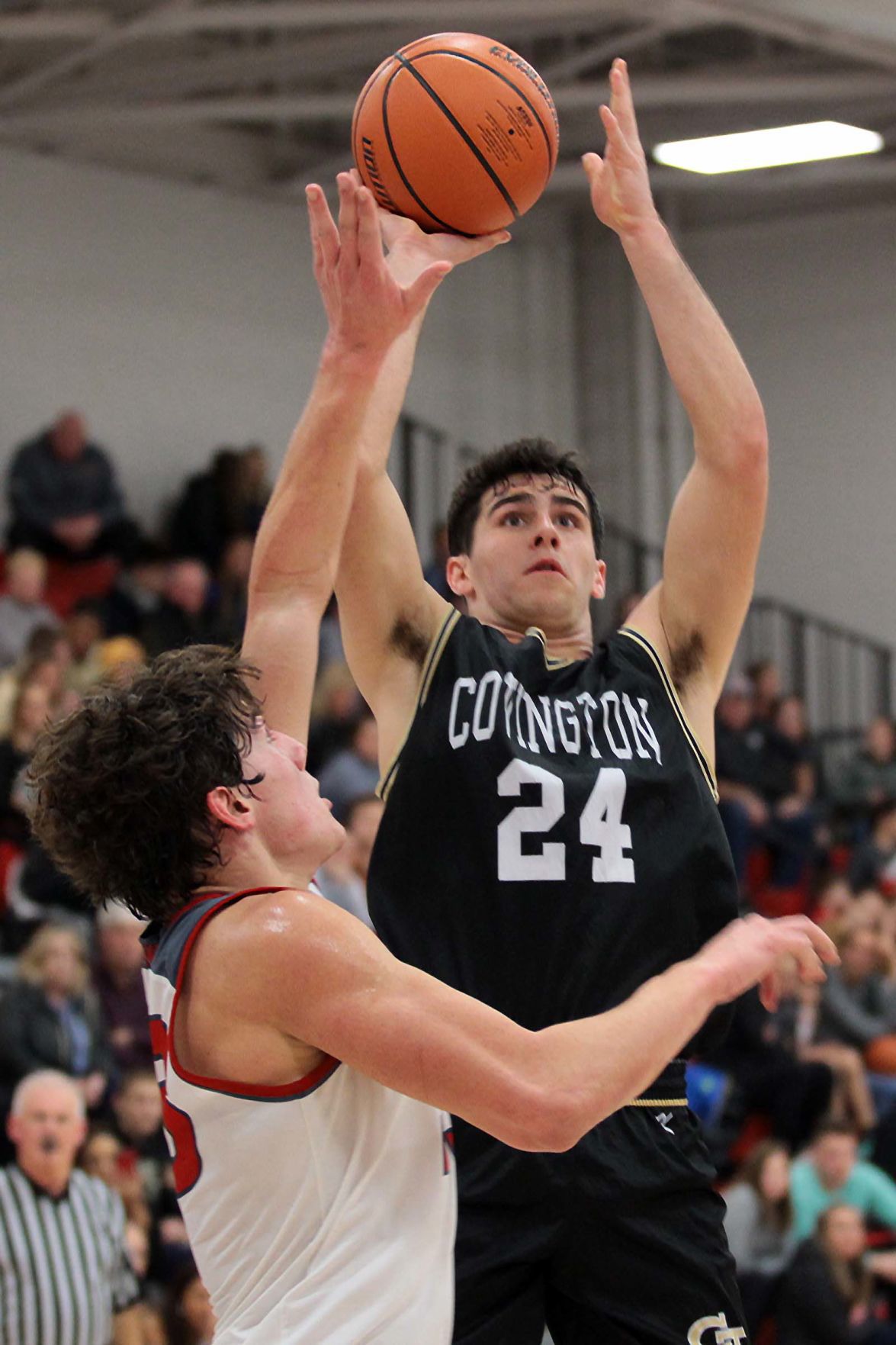 Caleb Ellmore of Covington shoots a jumper over Yanni Karlaftis of West Lafayette. 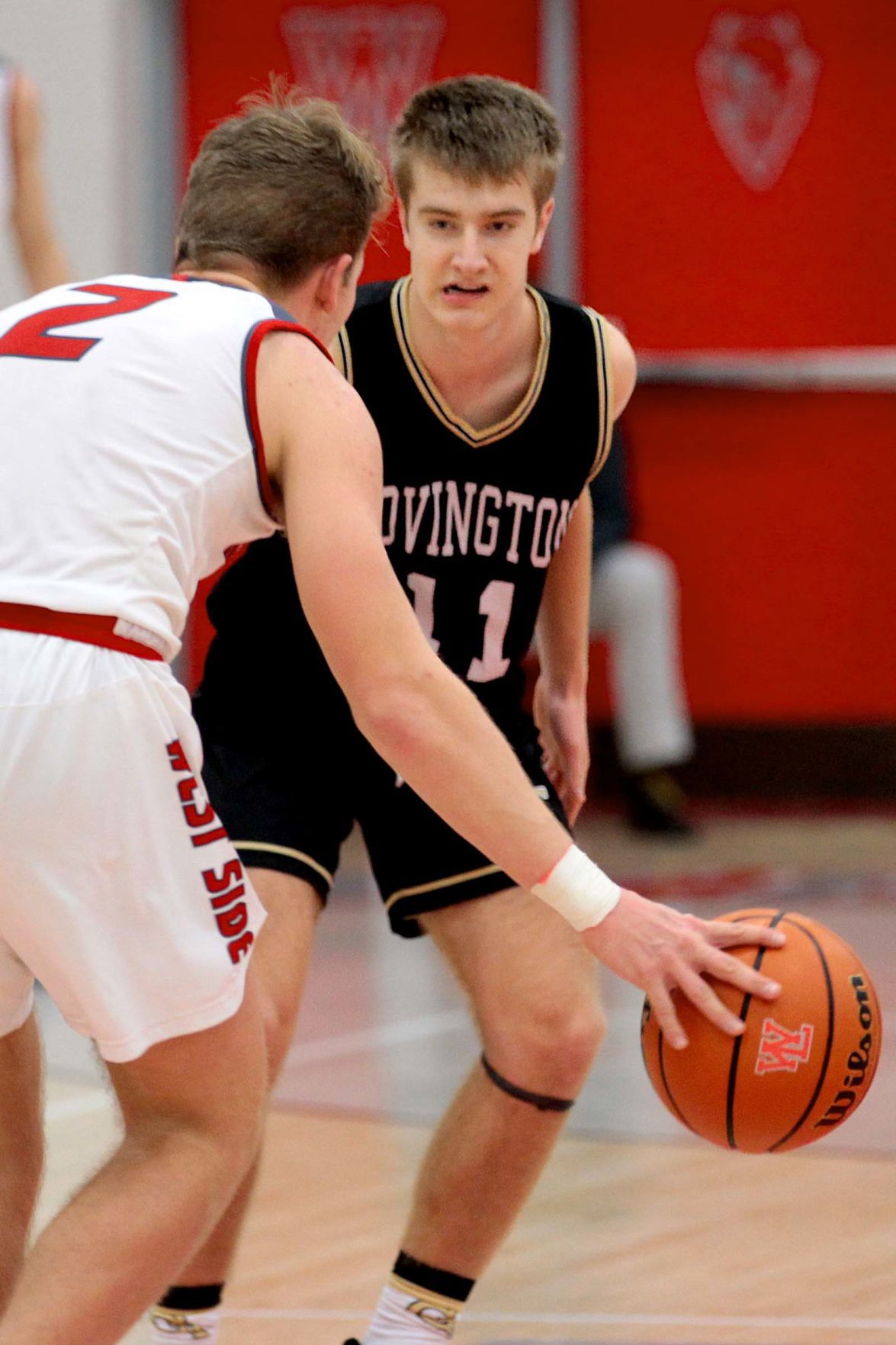 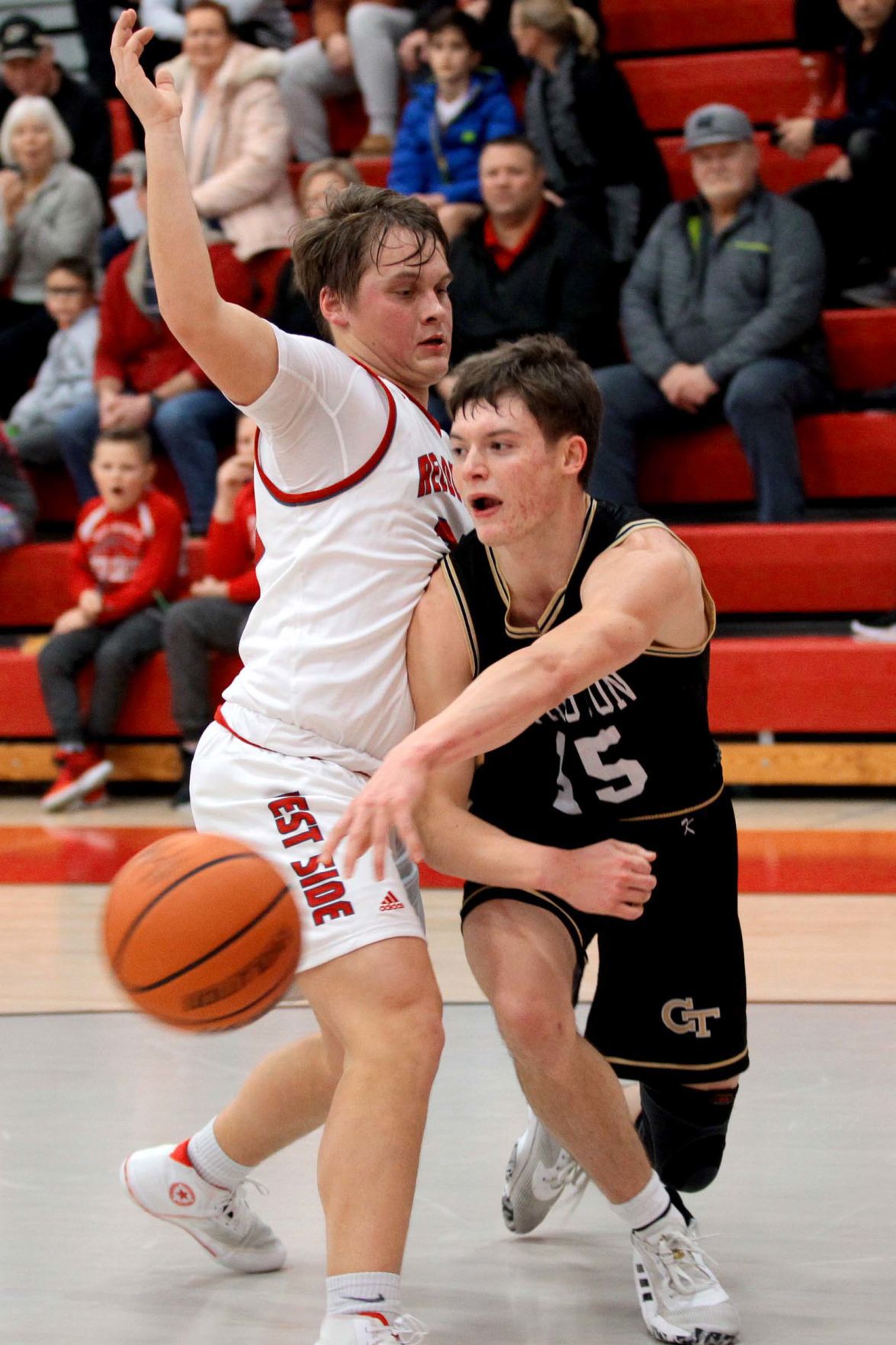 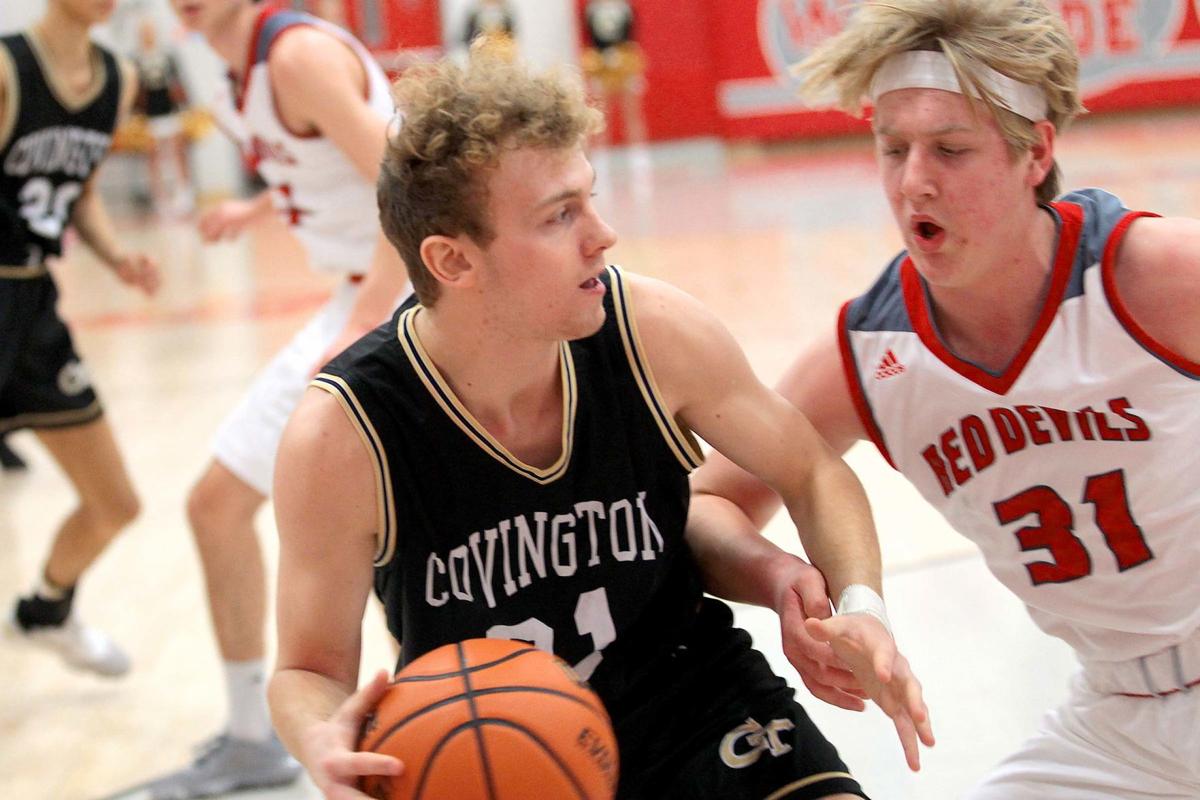 Logan Pinkerton of Covington is slowed by Sam Schott of West Lafayette.

Trey Bever of Covington looks to pass in the first quarter.

Caleb Ellmore of Covington shoots a jumper over Yanni Karlaftis of West Lafayette.

Logan Pinkerton of Covington is slowed by Sam Schott of West Lafayette.

On January 4, Covington defeated Seeger 71-33 to win the Bi-County Holiday Tournament and then a week later, January 11, the Trojans fell to West Lafayette 69-58.

In both of those contests, Covington did not shoot well from three-point range, but in the first one, the team used ball movement and an aggressive attack on the basket to play what Ballard called “our best game of the season.”

After the second of the pair, he was anything but happy.

“We were soft. We didn’t show any toughness out there,” he exclaimed. “Instead of going to the rim, we stopped and either shot a pull-up or passed the ball. It was like we were afraid of getting blocked.”

The coach kept repeating, “We need to be tougher” and said that if his team were to continue to play the way they did against West Lafayette, “We won’t win anything. We’ve got to do better.”

There were times when the Red Devils had an edge on the Trojans with 6’8” Will Lasater and 6’4” Yanni Karlaftis able to out jump 6’5” Savion Waddell and 6”0” Caleb Ellmore.

Ballard had no problem with the height issue, explaining, “That’s understandable. It’s going to happen at times, but when you don’t put a body on someone, it’s just lack of effort and some of our guys just didn’t do it.”

Things did not start well for Covington as they struggled with their shooting when the game began, missing shots and going down 6-0 before Ellmore made a lay-up at the 5:51 mark.

He would go on to score four more points for the Trojans in the period, but West Lafayette ran off nine points in that same span, including a pair of three-pointers, for a 15-6 lead after one quarter.

After the Red Devils opened the second period with a free throw, Covington began to make a comeback, getting two points from the line from Daniel Keller, baskets from Ellmore and Waddell along with five points from Logan Pinkerton to take a 17-16 lead.

West Lafayette scored no points in the three minutes it took for the Trojans to take the lead, but finally they got a jumper to go back up 18-17.

The teams traded baskets and free throws until there was just under 1:30 left in the half when the hosts hit their third trey of the game to tie the contest at 23-all going into the intermission.

David Wood, the West Lafayette head coach, has over 350 wins in a 26-year career with the Red Devils, so he was able to describe the first half concisely, saying, “We played well at both ends of the court. We got good shots, but some of them wouldn’t fall for us. And Covington kept coming at us.”

The third period started with the teams swapping baskets for the first 3 ½ minutes, good enough for a tie game at 29-29, but then the Red Devils got the run they needed, thanks in part to their height.

They made a basket and then added a three-pointer for a five-point lead in a span where Covington was cold, shooting several “one-and-done” shots whose misses were rebounded by the taller West Lafayette players.

Pinkerton slowed the run with a pair of free throws, but the Red Devils would go on to open up a seven-point lead before the Trojans made another small spurt, getting points from Pinkerton and Colton Brown to trim their deficit back to four before the hosts hit a late basket for a 46-40 lead going into the final quarter.

Pinkerton hit a driving lay-up to open the scoring, but then the Red Devils hit a pair of threes and a jumper in a minute and six seconds to lead 54-42.

Covington then scored four in a row and looked as if they were going to make their third run of the game, but West Lafayette hit their seventh trey of the game along with three free throws to make it 61-46 before Ellmore made a lay-up to stop the run.

Up thirteen with 3:02 left in the game, the Red Devils went into a spread offense that forced Covington to try to press to get back within range of the hosts.

That defensive pressure did cause a few turnovers and the Trojans took advantage to get closer before the horn as Ellmore made a lay-up and Pinkerton and Brown each made a three-pointer, but that only made the score 69-58 by game’s end.

Wood said he was impressed with Covington’s ball movement, saying the Trojans “are an offensive machine who expended a lot of energy against us.”

He complimented Ballard by adding, “Adam always puts a good team out there. We have to work hard when we play them.”

Ballard agreed that his team had good ball movement, but he was disappointed about the failure to attack the rim and also that he thought his team lost most of the 50-50 balls because “We’re not tough enough.”

He then added, “You’ve got to have pride in yourself – to work hard the entire game. We had too many people just watch. It’s all about effort and, while we worked for some good shots, we didn’t attack enough to win this game.”