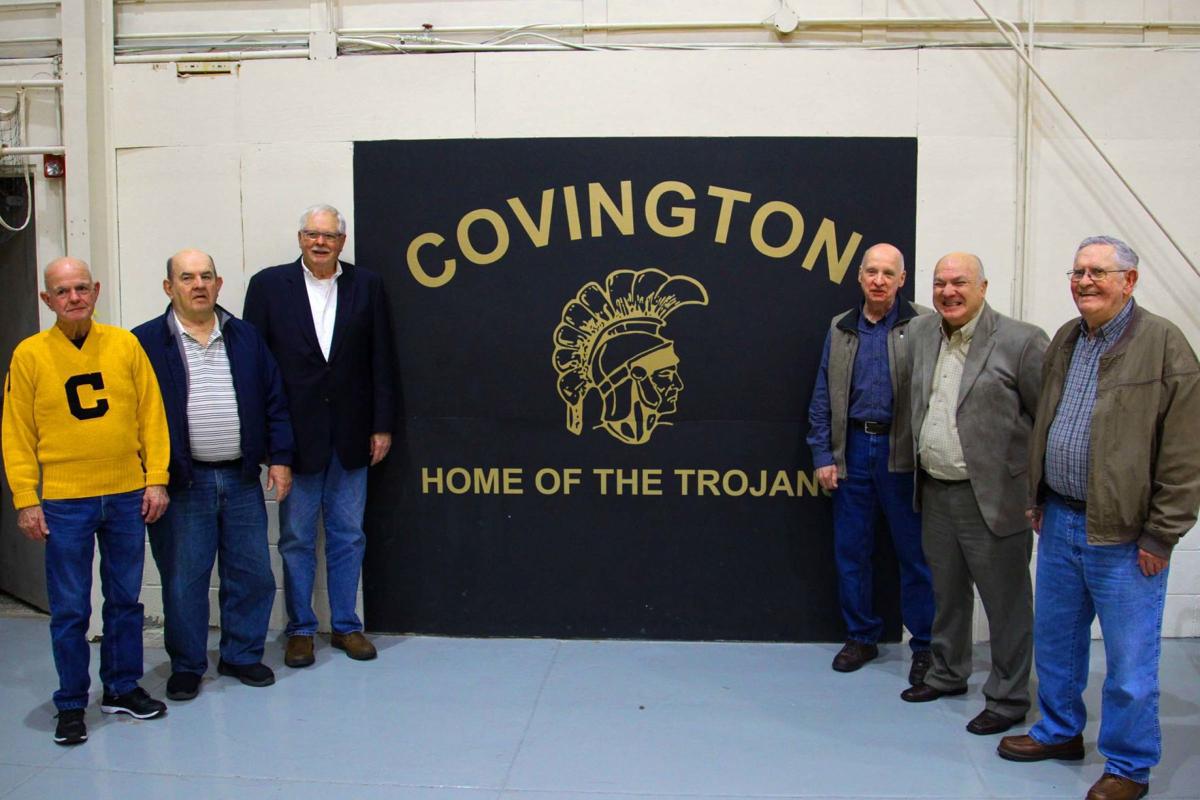 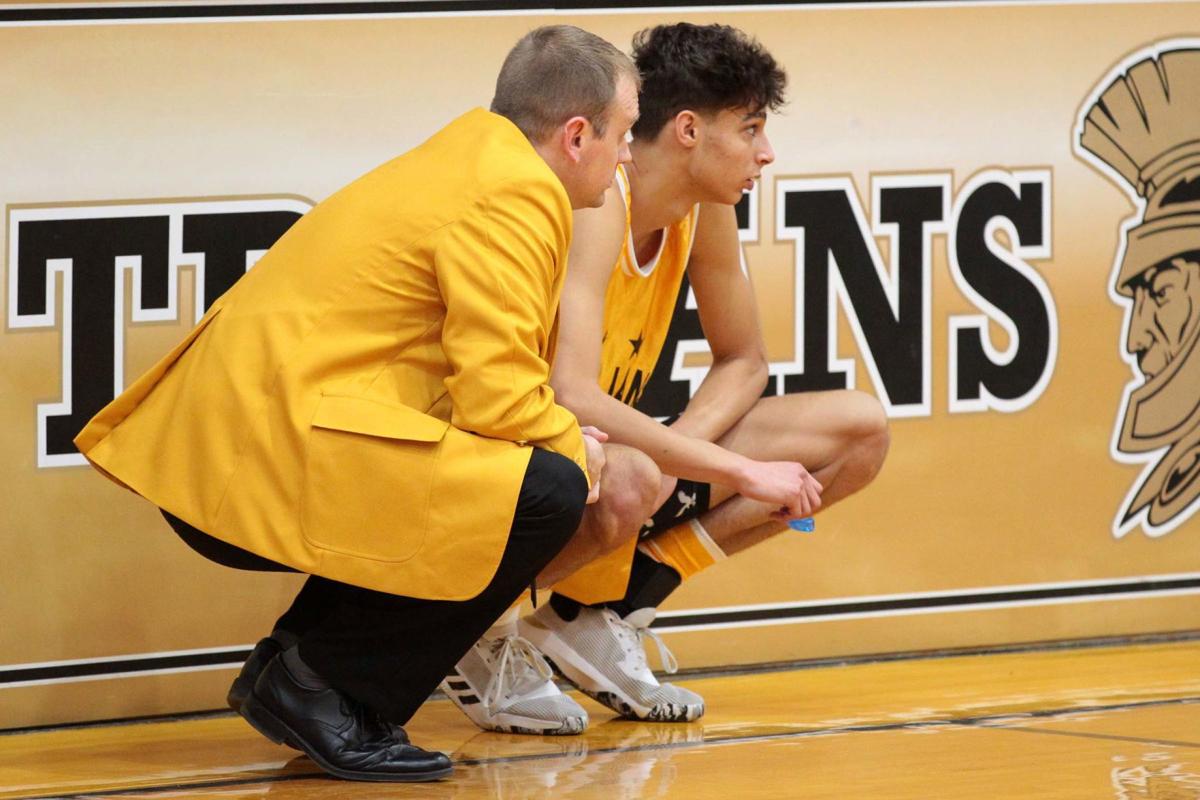 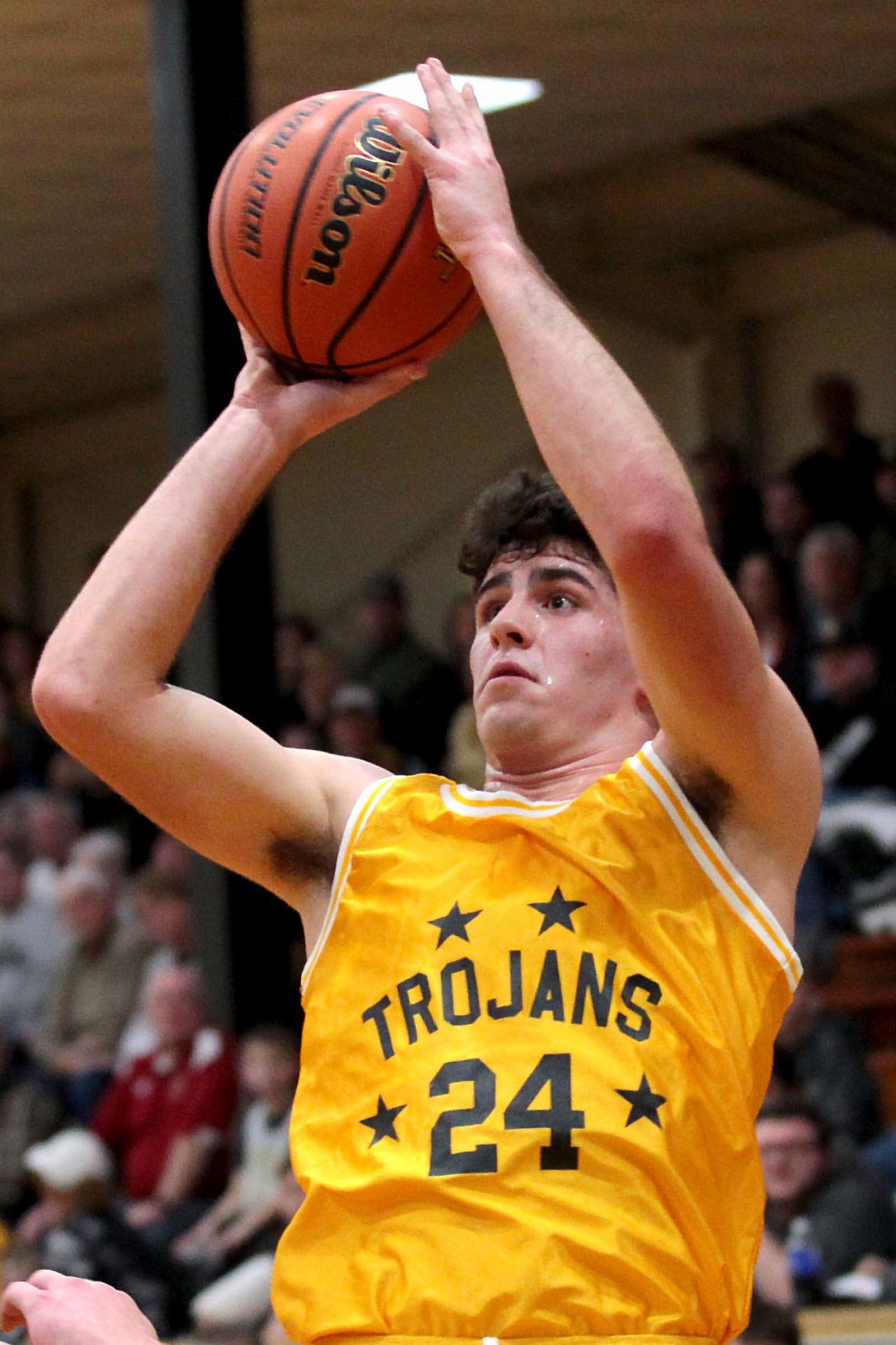 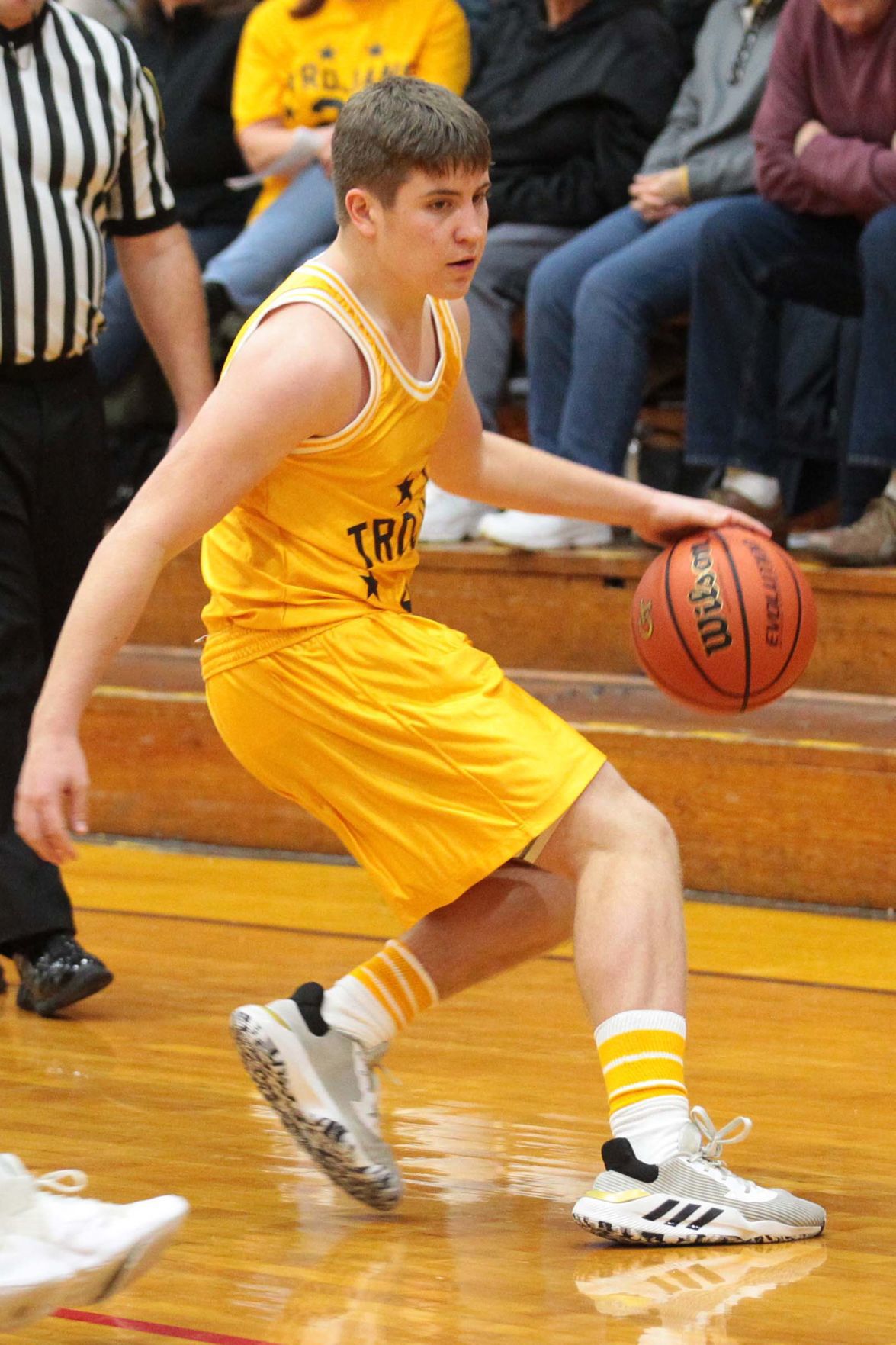 Neil Ellmore of Covington dribbling out the final seconds of the game. 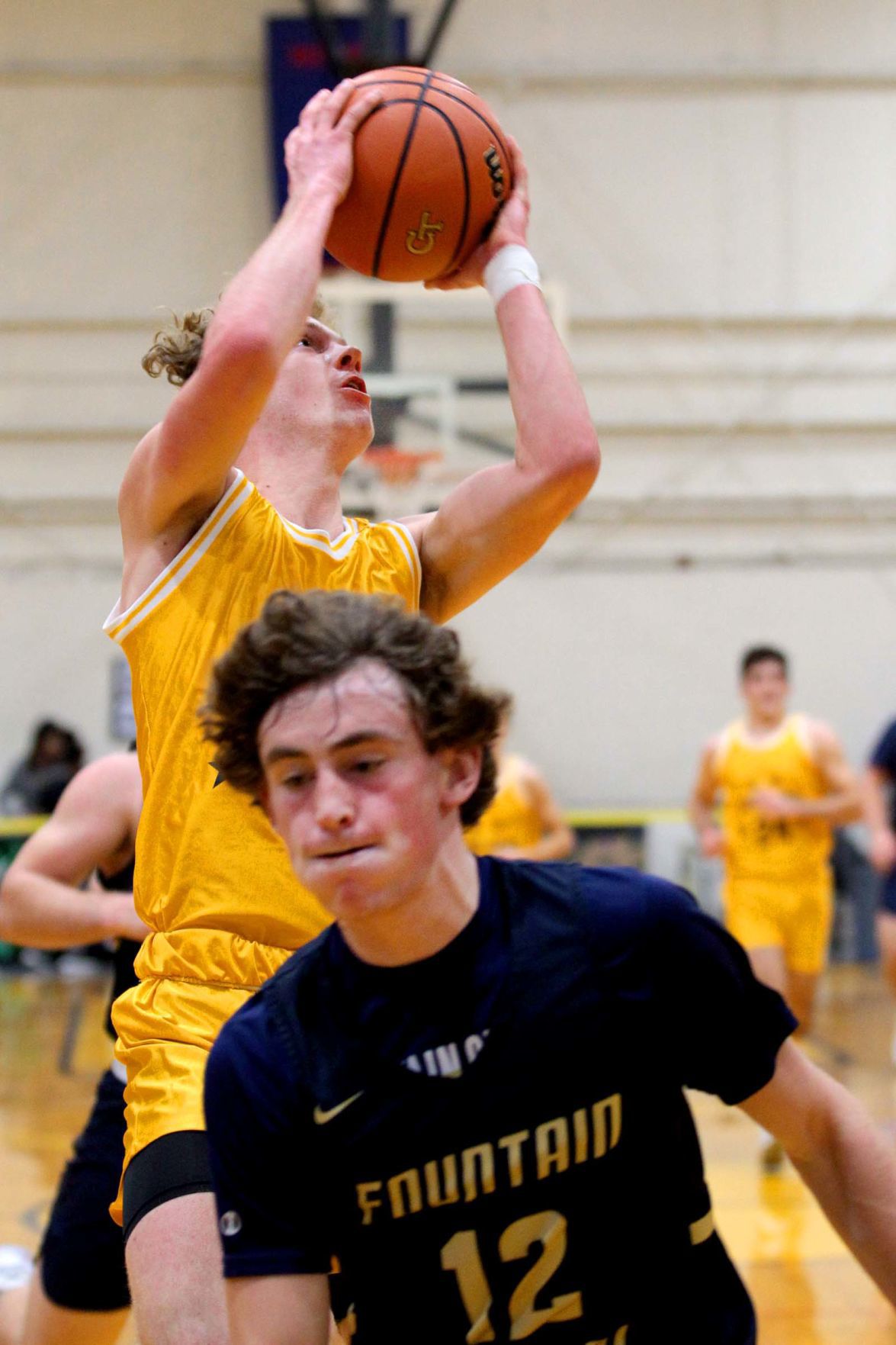 Logan Pinkerton of Covington a shooting short jumper as Carson Eberly of Fountain Central races past him. 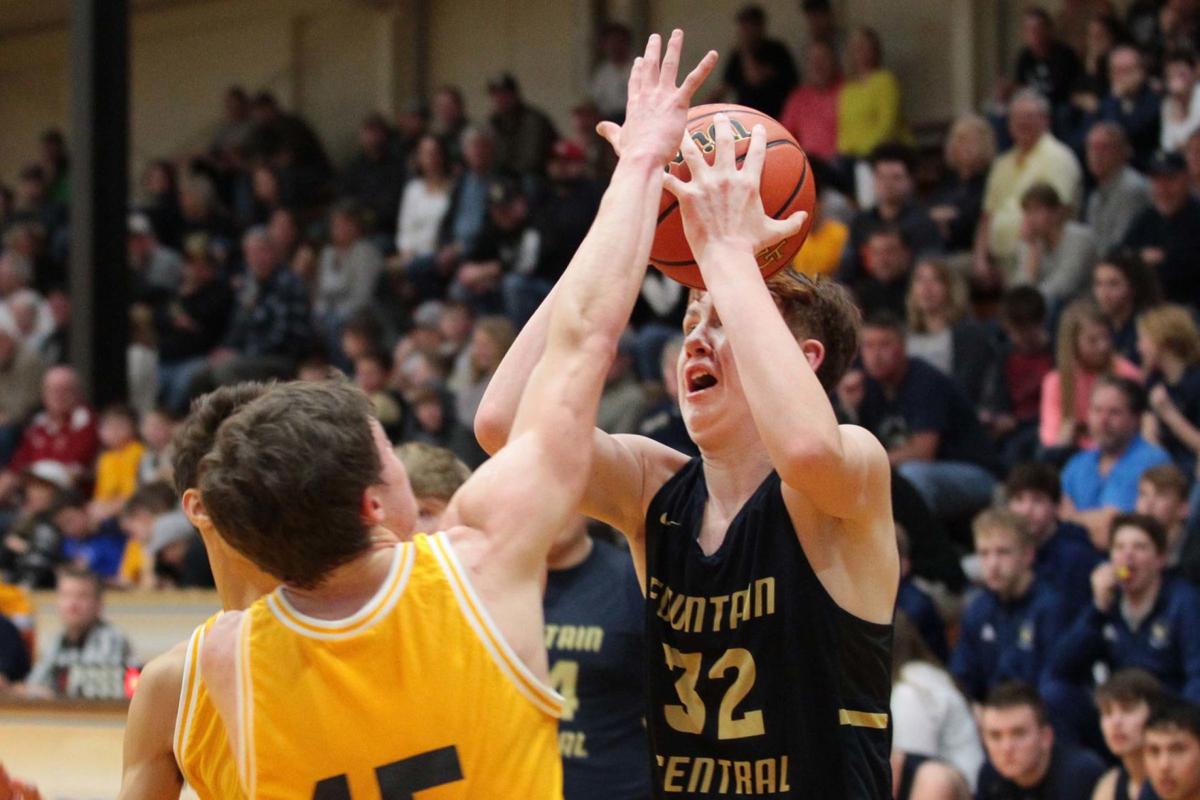 Mason Larkin of Fountain Central shooting a jumper over Daniel Keller of Covington. 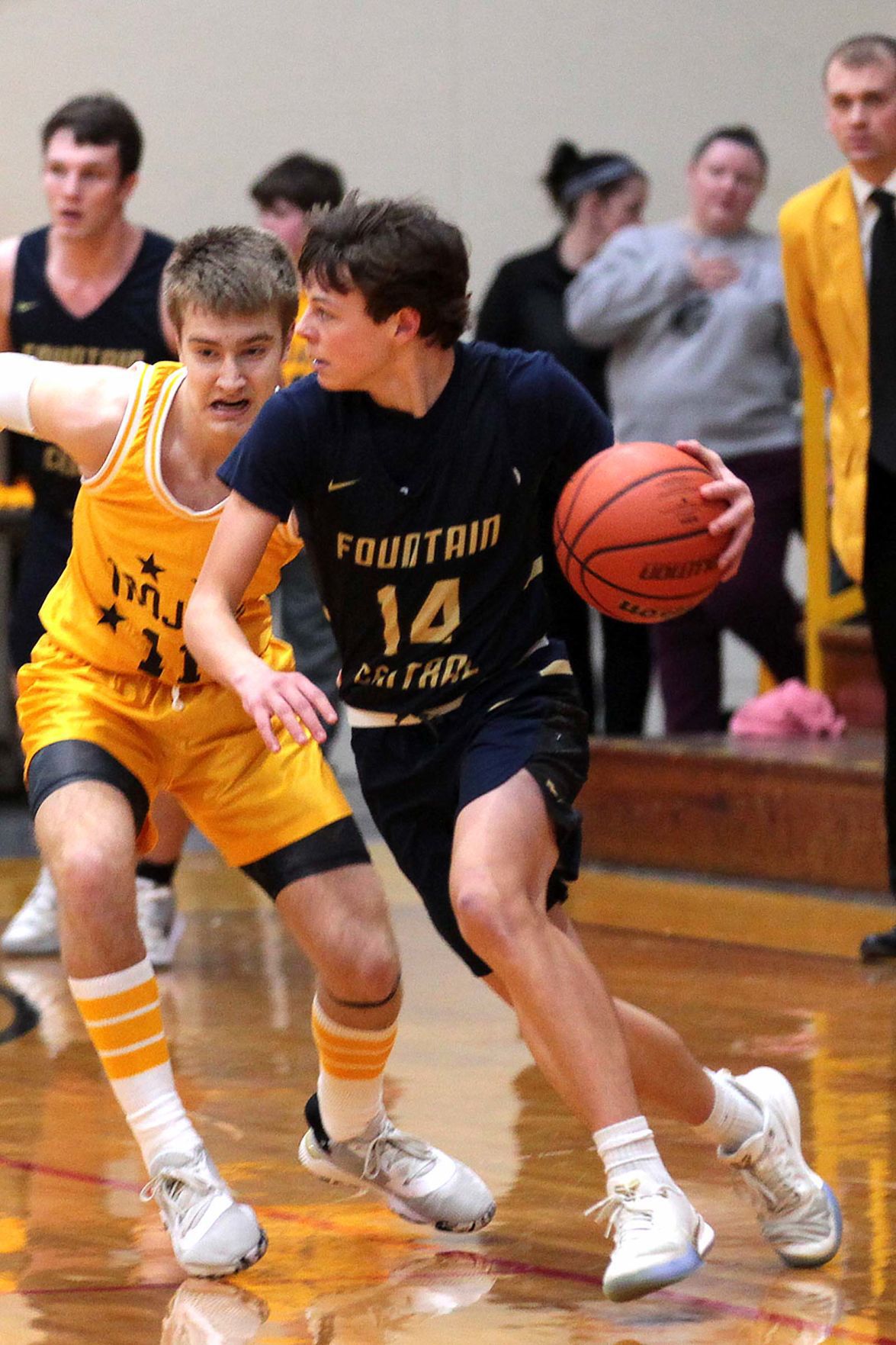 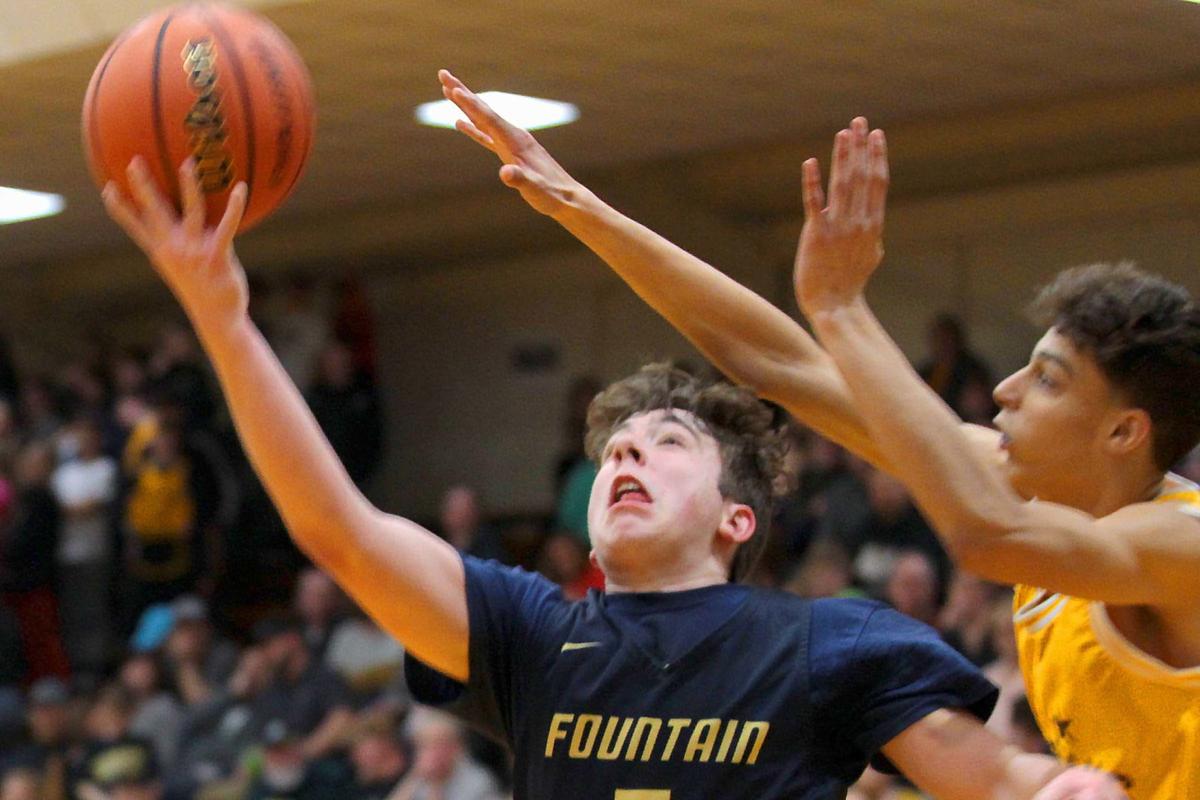 Andrew Shabi of Fountain Central scoops a lay-up as Savion Waddell of Covington goes for a block.

Neil Ellmore of Covington dribbling out the final seconds of the game.

Logan Pinkerton of Covington a shooting short jumper as Carson Eberly of Fountain Central races past him.

Mason Larkin of Fountain Central shooting a jumper over Daniel Keller of Covington.

Andrew Shabi of Fountain Central scoops a lay-up as Savion Waddell of Covington goes for a block.

Covington High School wanted to honor its two most recent boys’ basketball regional championship teams a week ago, but weather forced the postponement of the ceremony that was to have been held at halftime of a home game against Fountain Central.

The schools rescheduled the basketball game for Tuesday night, but that meant the 1981 team could not attend so the Trojans honored just their 1959-60 squad.

They did so by having the varsity team wear old-style t-shirt jerseys and by playing in the Covington Middle School gym, known more commonly as the “old gym” to long-time residents of the town.

At halftime, members of that squad of 60 years ago (Lawrence Cole, Al Harden, Roger Rennick, Kenny Tuggle, Scott Wallace and Larry Woodrow) were brought out one at a time to center court to wave to the crowd after which the six got together for a group photo.

The varsity contest started at an extremely slow tempo that would have been familiar to many fans and players from that era (though not for Covington fans as the 59-60 squad was high scoring).

Phil Shabi, the Fountain Central head coach, knew that the current Trojan team wanted a fast pace much like their predecessors from 60 years earlier, so he had his squad play at a very deliberate pace, looking only for good shots, on possessions that took as much as 90 seconds.

The Trojans went along defensively, shifting and switching as the Mustangs moved the ball from side to size, but whenever the hosts took possession, they raced down the court in the hope of speeding up the game.

“We started [strongly] on defense,” Adam Ballard, the Covington coach said. We had great focus on that end in the first quarter.”

That both coaches got what they wanted was reflected in the play as it took a minute before the Trojans scored the first basket of the game, a trey from Logan Pinkerton, and then three more minutes before Jake Smith scored for Fountain Central for 3-2 tally midway through the first period.

Two minutes later the teams traded baskets and then Caleb Ellmore made a lay-up with a minute to go with no one scoring again in the quarter, which ended 7-4.

“We knew we wanted to limit the number of possessions they had,” Shabi said, “but that has the drawback of making every possession of more value. The team did everything I asked them to do in that first quarter.”

The pace was still slow as the second period began with Covington scoring every minute or so, but most of their baskets came off steals or other Fountain Central turnovers that let the Trojans run their fast break offense.

Good neighbors meeting up online to help each other

Meanwhile, the Mustangs were attacking in the same deliberate fashion as they had in the first period, but they either missed shots or ran into a wall of Covington defenders who denied a good shot for the dribbler.

The turnovers lead to runouts by Covington, which allowed the team to up the tempo to the pace they wanted, and the hosts ran off 20 points before Fountain Central hit the scoreboard again.

Down 27-4, Mason Larkin made a trey for the first Mustang points in six-and-a-half minutes, but Covington continued to up their lead.

The Mustangs got baskets from Cole Kirkpatrick and Carson Eberly, but the Trojans score even more, getting a lay-up from Savion Waddell and a trey from Daniel Keller to make it 34-11 at halftime.

“We missed some shots [in the second quarter] and they got some turnovers which changed the game,” Shabi said. “If we hit a couple of those, maybe it’s a different game.”

Covington found their outside shooting eyes in the third quarter as Pinkerton opened the period with a trey and later Alan Karrfalt made three of them before the final period started.

Eberly and Larking managed to hit from beyond the arc for the Mustangs, but the team could find little else from the field and trailed 59-22 going into the fourth quarter.

Smith and Kirkpatrick scored consecutive baskets for Fountain Central to open the final period, but Karrfalt hit his fourth trey of the game right after those buckets.

The two teams played their reserves from then on and the Trojans would not score again, but Fountain Central would add eight more points to close out the game at 62-34.

Ballard said his team, starting in the second quarter, began to get turnovers that allowed the team to run, saying, “When our defense is creating offense for us, that’s when we’re playing our best.”

The Trojans had five players with eight or more points with Ballard saying that was a plus, “When we have that many guys score, it makes it hard for other teams to stop us.”

Ballard closed by saying, “I know it’s February, but we’re still growing and learning what we have to do to win. We want to do better than we did tonight.”