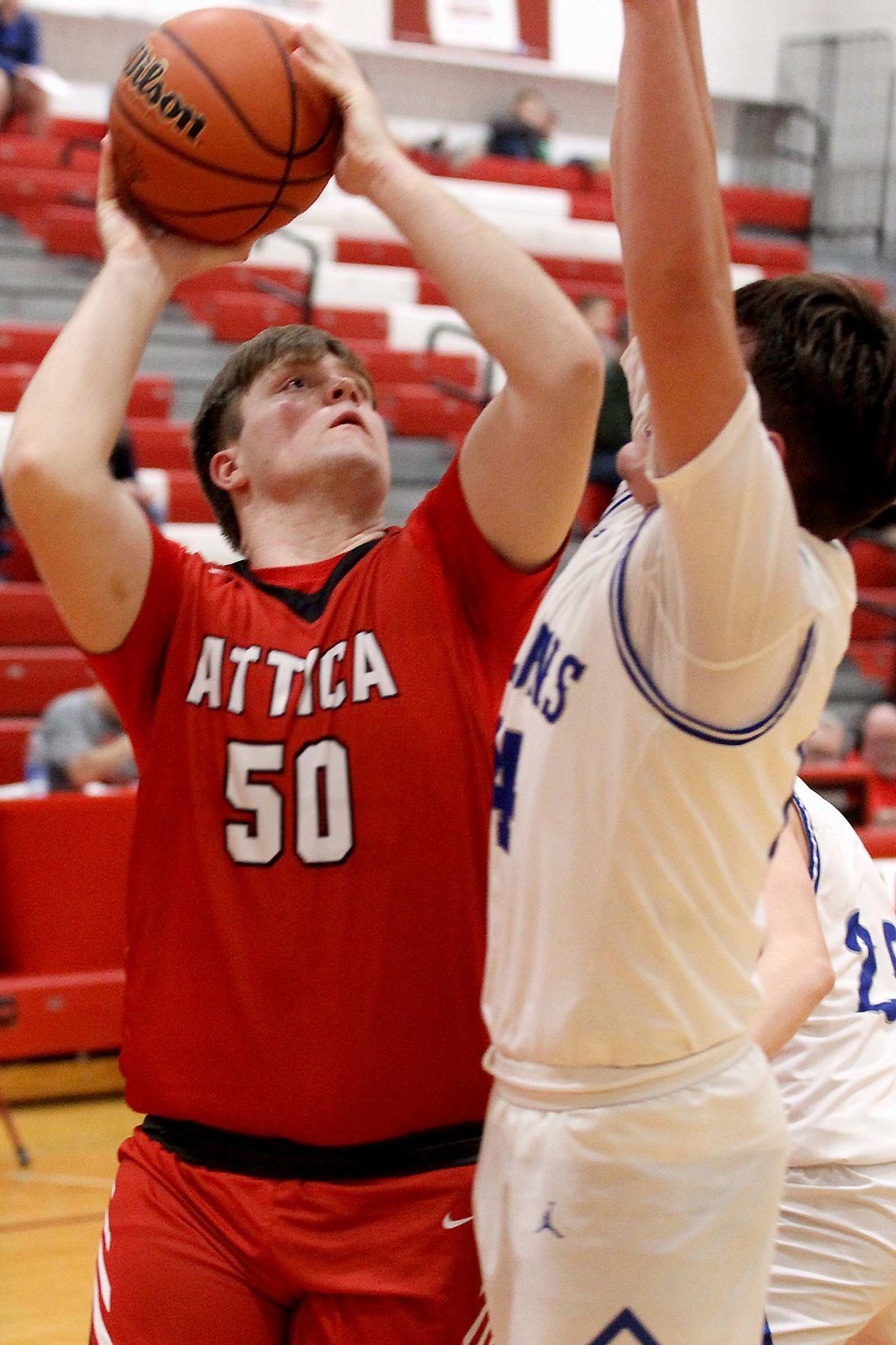 Brandte Gayler of Attica goes up for a shot against Carter Edney of North Vermillion. 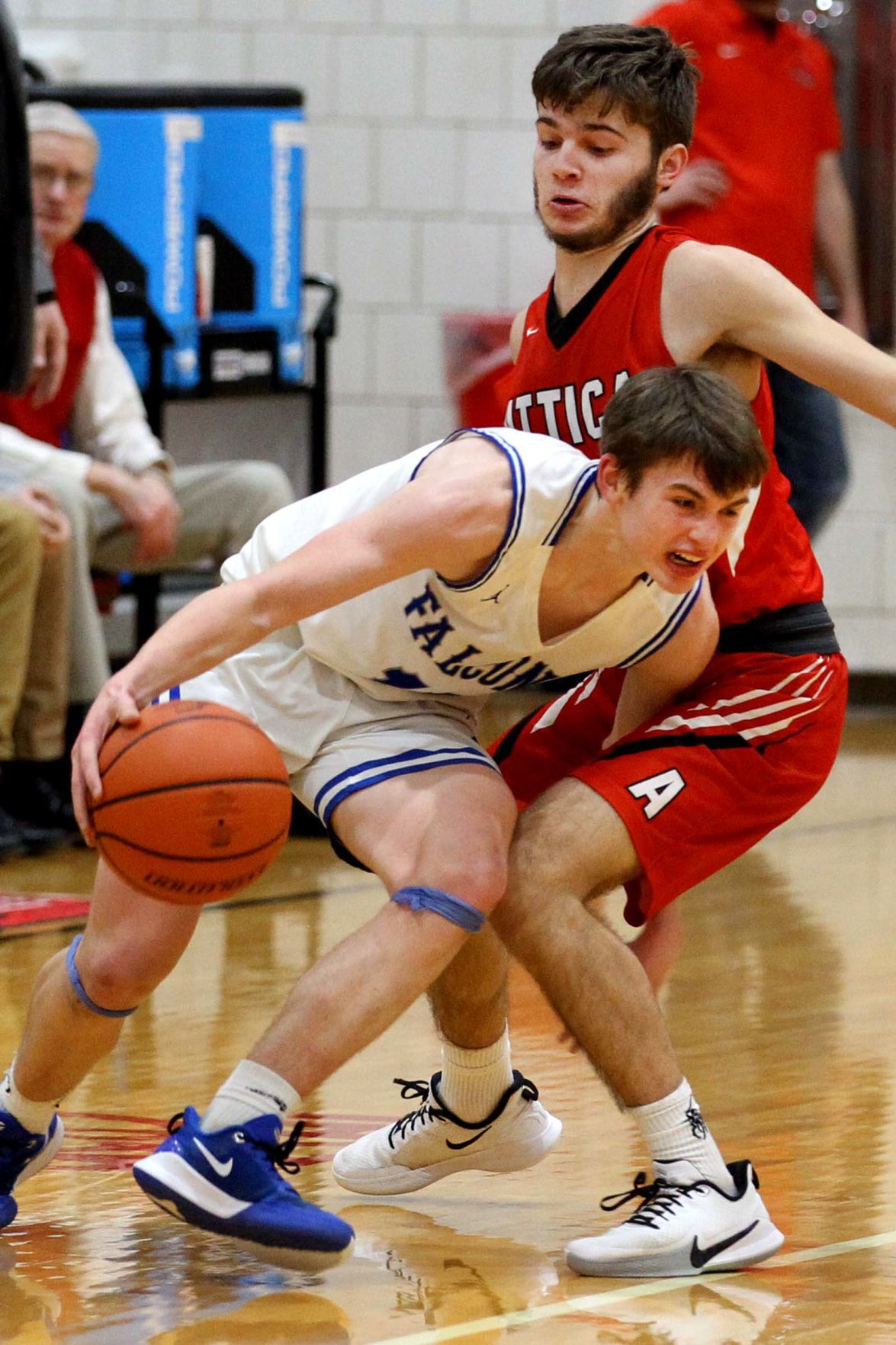 Seth Hartman of Attica cuts off a drive by Dalton Thomas of North Vermillion. 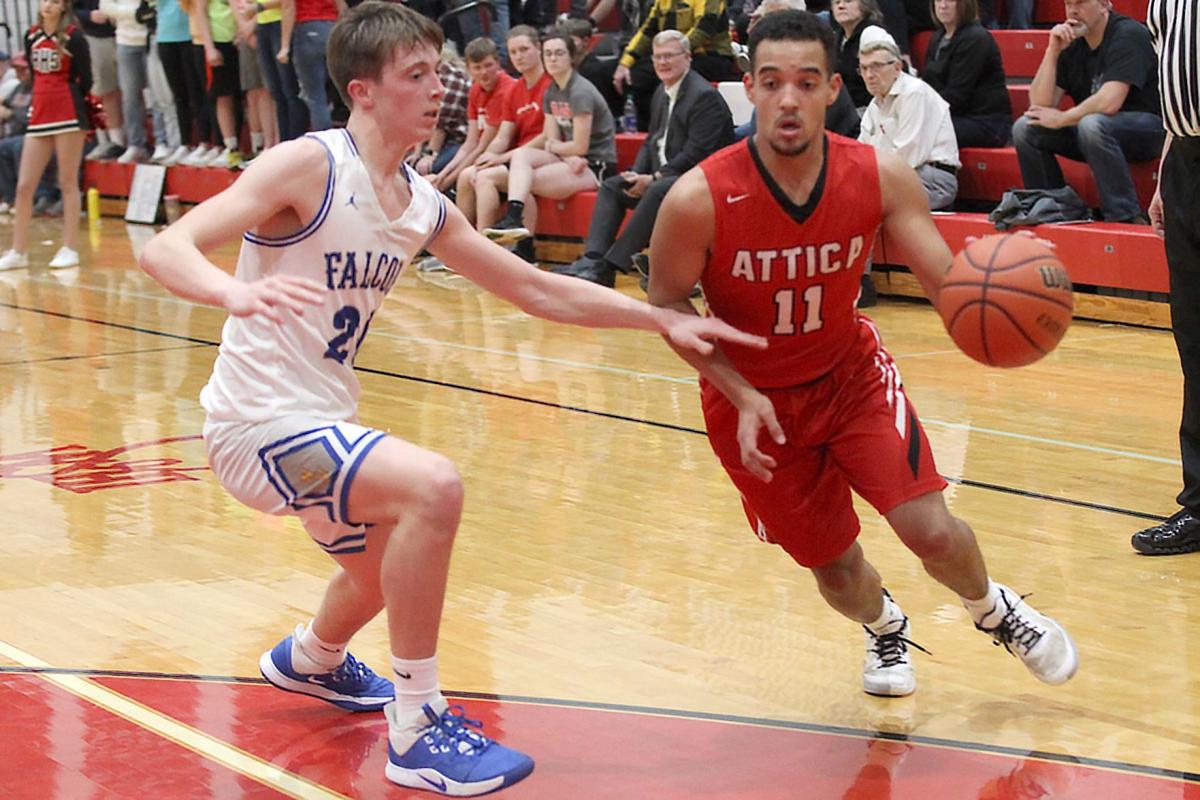 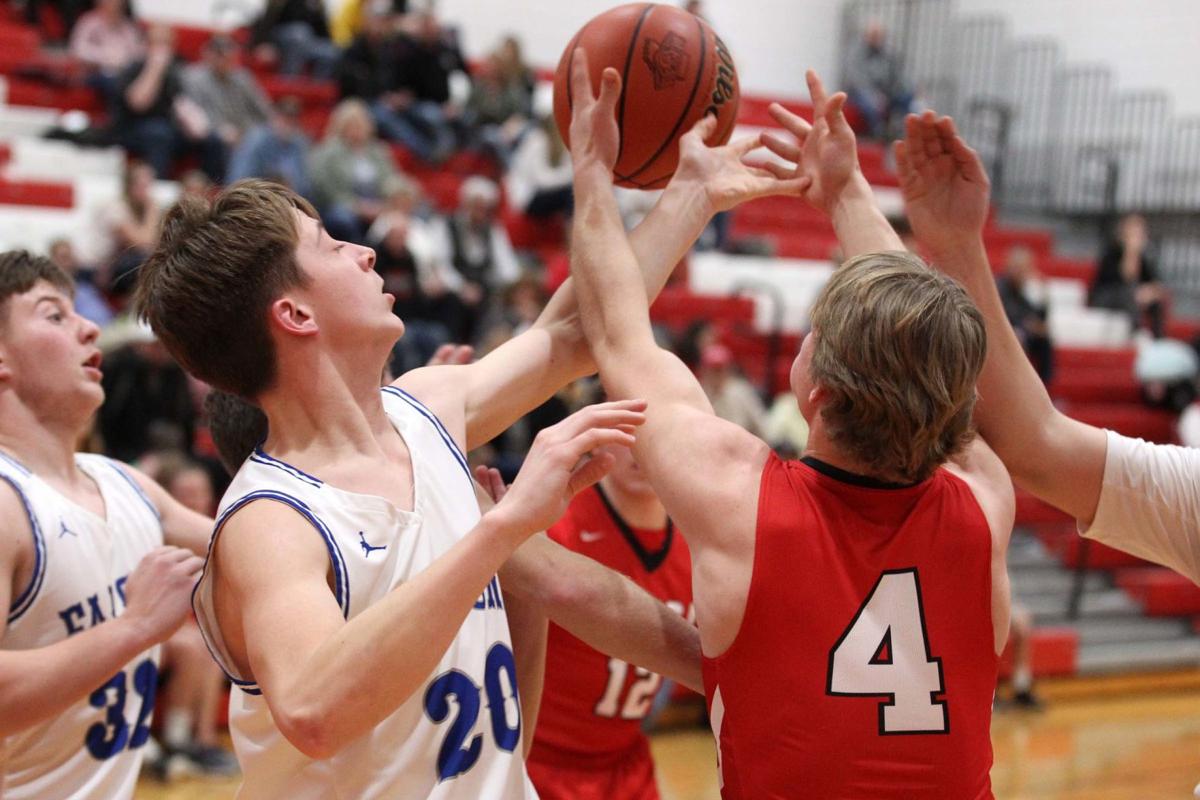 Colby West of North Vermillion and Eli Kirkpatrick of Attica battle for a rebound in the first quarter of their game. 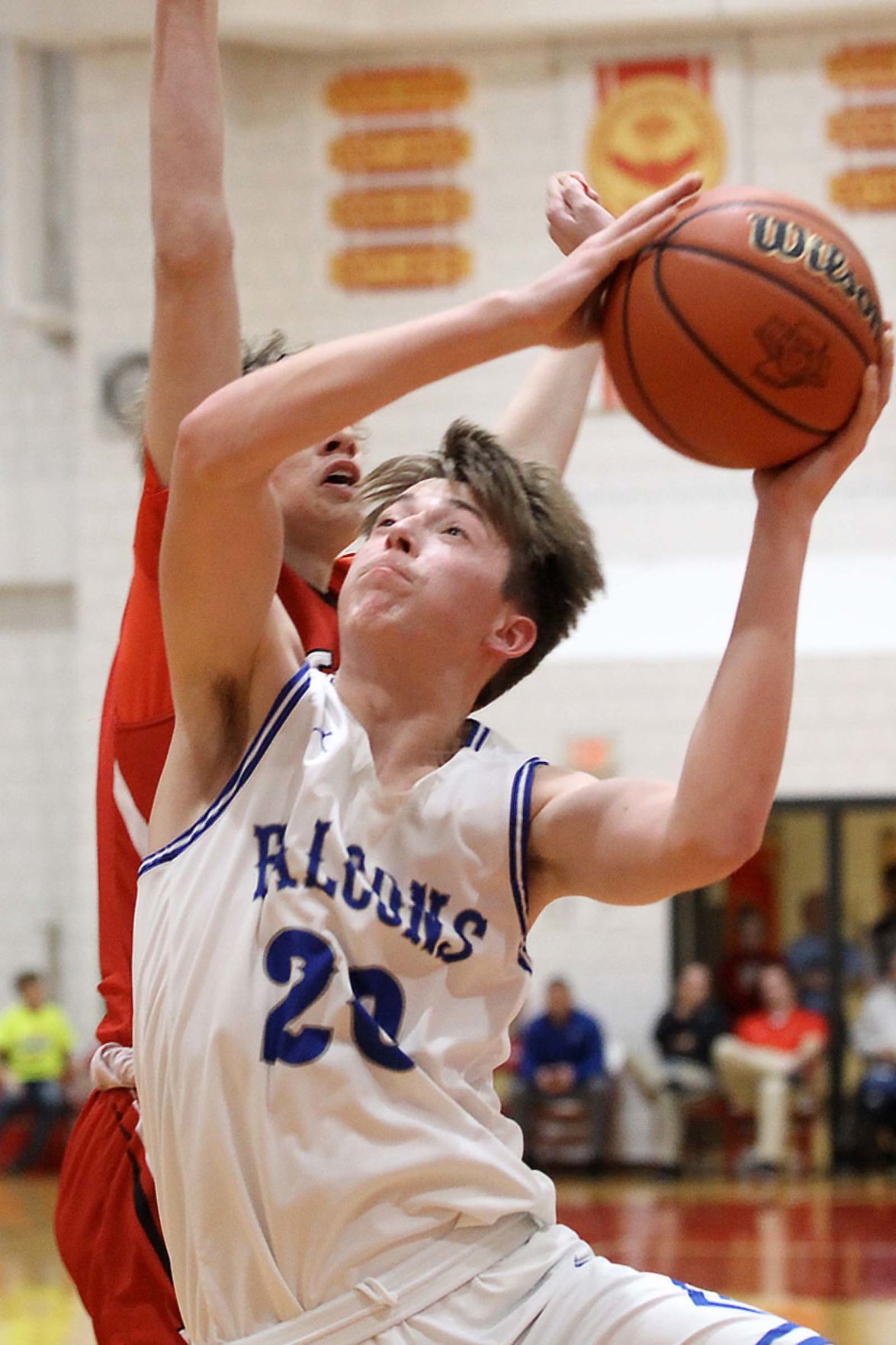 Colby West of North Vermillion puts up a lay-up after getting past Zeb Shonkwiler of Attica.

Brandte Gayler of Attica goes up for a shot against Carter Edney of North Vermillion.

Seth Hartman of Attica cuts off a drive by Dalton Thomas of North Vermillion.

Colby West of North Vermillion and Eli Kirkpatrick of Attica battle for a rebound in the first quarter of their game.

Colby West of North Vermillion puts up a lay-up after getting past Zeb Shonkwiler of Attica.

Attica hosted 1A Sectional 54 and the Red Ramblers drew North Vermillion in the bottom of the bracket meaning the two teams would meet as the second game of the opening night.

Back on January 10, Attica defeated North Vermillion on this same floor, but the youthful Falcons are a developing team and it came as no surprise that this contest was closer though the Ramblers did end up winning 32-30.

All season, North Vermillion coach Cody Wright has said his team has two weaknesses – strength and shooting ability – but they are a solid defensive team.

Those words were prophetic as his team limited the Attica offense, but the squad could not score often enough on the other end.

Yet the Falcons opened the game with a three-pointer from Carter Edney and, after a pair of free throws from Jackson Davis for the Ramblers, got a driving lay-up by Colby West for a 5-2 tally.

Eli Kirkpatrick made a putback for Attica and then Davis made one of two free throws to tie the contest at 5-all before Ethan Watson put back a Falcon miss for a 7-5 lead.

A late jumper by Zeb Shonkwiler tied the game at seven-all going into the second quarter.

North Vermillion did their best to prove their coach wrong as they opened the second period with a pair of three-pointers (one by West and one by Dalton Thomas) around a lay-up from Brandte Gayler for a 13-9 score.

Edney added a lay-up for a 15-9 total – the largest lead for the Falcons all night – but Shonkwiler cut into the margin with a pair of consecutive baskets.

The teams traded baskets – Edney for the Falcons and Seth Hartman for the Ramblers – and then the two squads did it again with Isaiah Edwards scoring for North Vermillion and Antonio Jerkins for the hosts, making it a 19-17 score just past the midway point of the period.

Dalton Bush tied the game for Attica with a putback and then the Ramblers took their first lead of the game on a Gayler basket.

Hartman made it a four-point contest, but Owen Norman countered with a late bucket for a 23-21 scoring going into halftime.

The less said about the third quarter the better as each team managed only four points each for a 27-25 total going into the final eight minutes.

Scoring did not improve much in the final period, but the drama certainly increased.

Jerkins opened with a lay-up for Attica, but back-to-back baskets by Watson tied the game for the Falcons at 29-all with 4:33 left.

The next two minutes saw fouls dominate the action and eventually Thomas went to the line for North Vermillion and made one of two free throws for a 30-29 lead.

Attica missed the front end of a one-and-one with 1:15 left but North Vermillion, after a timeout, could not score on two shots attempts and eventually the Ramblers got the ball back.

The hosts again drew a foul, but missed the front end of the one-and-one with 31 seconds left and the Falcons got the rebound, taking a timeout at the 0:28 mark.

Twenty seconds of play went nowhere, as the visitors could not find an open look so Wright called another timeout with eight seconds on the clock.

Again, the Attica defense stood firm and the Falcons could do nothing but throw up a shot at the horn that missed meaning the Ramblers won 32-30.

“Survive and advance” were the first three words Bruce Patton, the Attica head coach said in his postgame interview. “That’s about all you can say.”

He went on to add that his offense moved the ball well, showing patience against the Falcon defense while on the other end, he praised the defense for “getting turnovers for us.”

Wright said the game came down to two things: fouls and their ensuing free throws along with rebounding where he said Attica got second-chance points.

“We played hard, but we couldn’t stop them at times – like the second quarter,” he explained. “We never quit, but we just couldn’t get the baskets we needed.”

Wright concluded by saying, “This was a learning experience for our young team and we’ll use it in the future, but next for us is work in the weight room and gym. We’ve got to get stronger and shoot better, but we have most of the summer to work on it.”

Cloudy skies this morning will become partly cloudy this afternoon. Slight chance of a rain shower. High 76F. Winds NW at 10 to 15 mph.