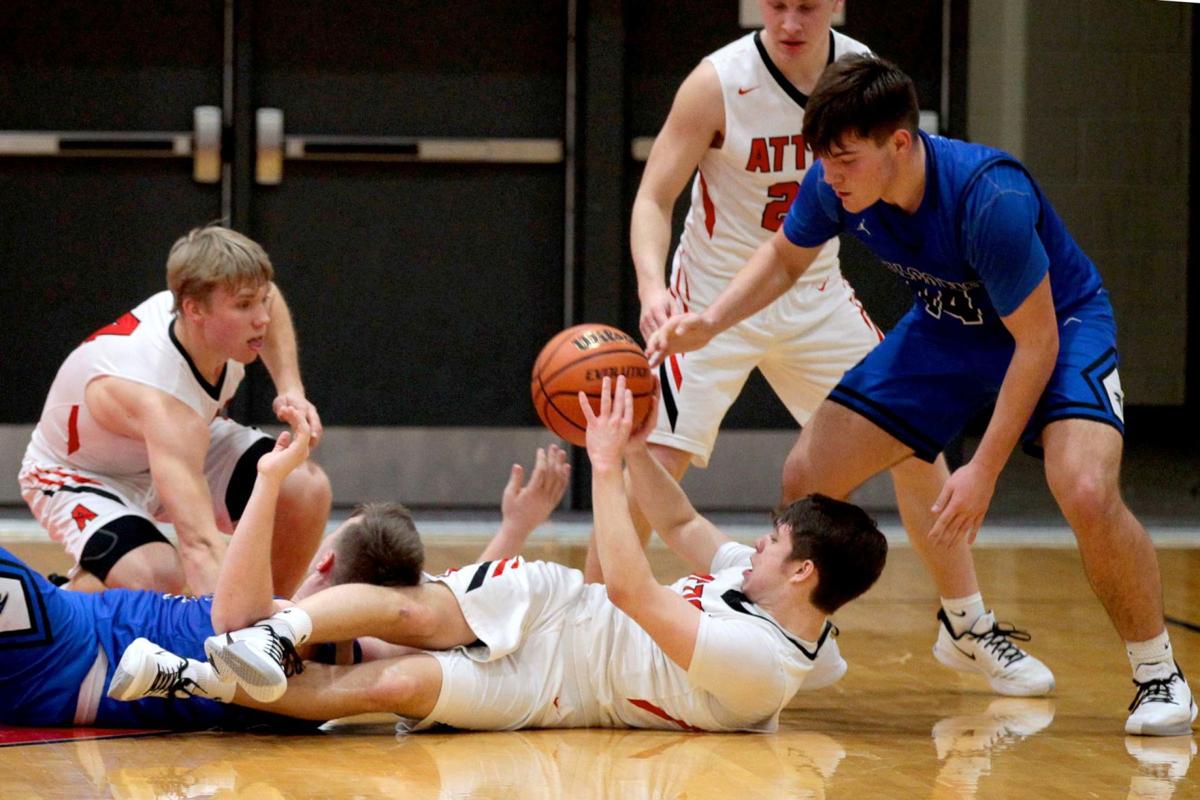 Dalton Bush of Attica passes the ball from the ground after several players hit the floor trying to get their hands on it. 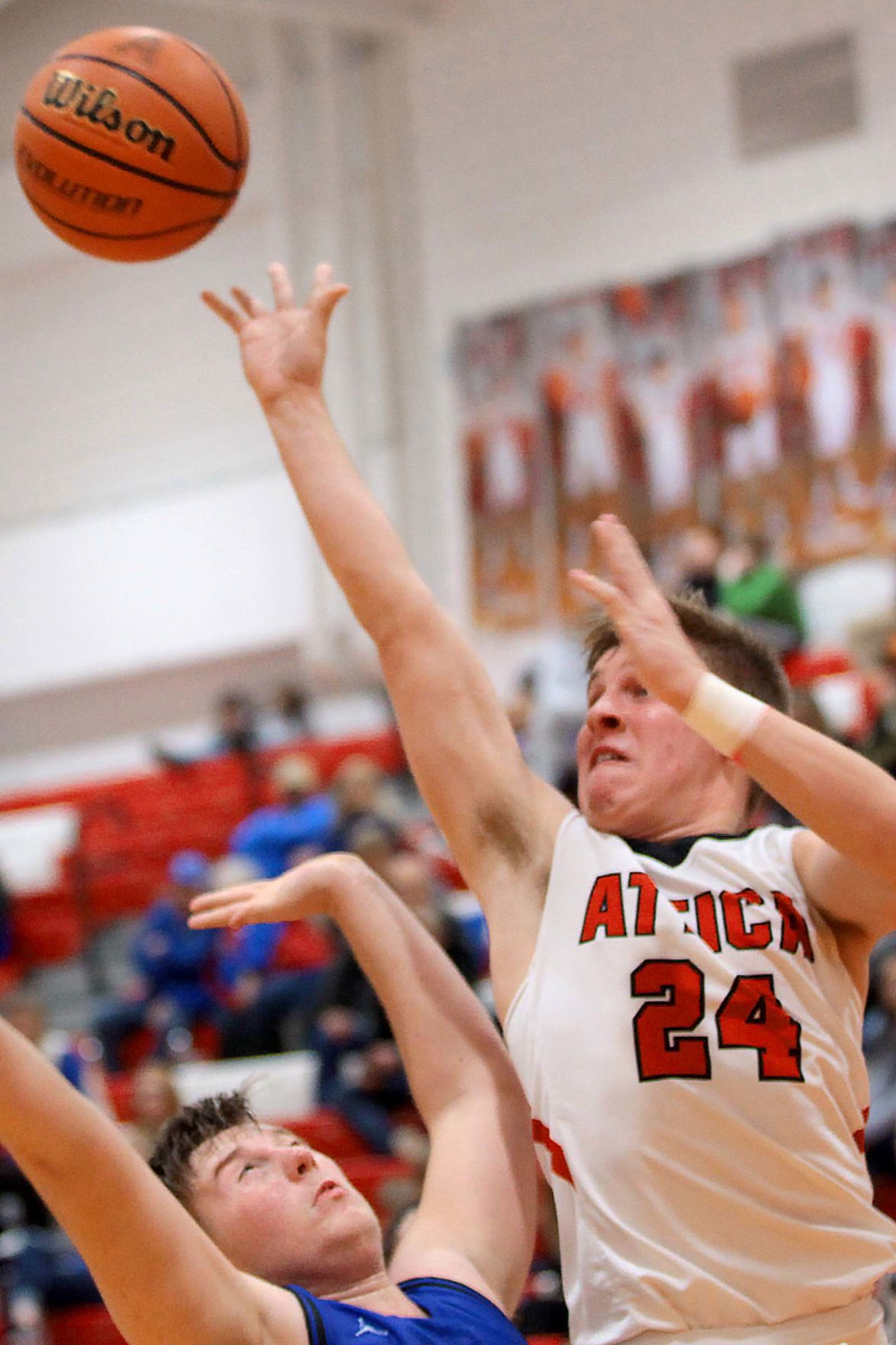 Cam Moore of Attica puts up a runner in the third quarter. 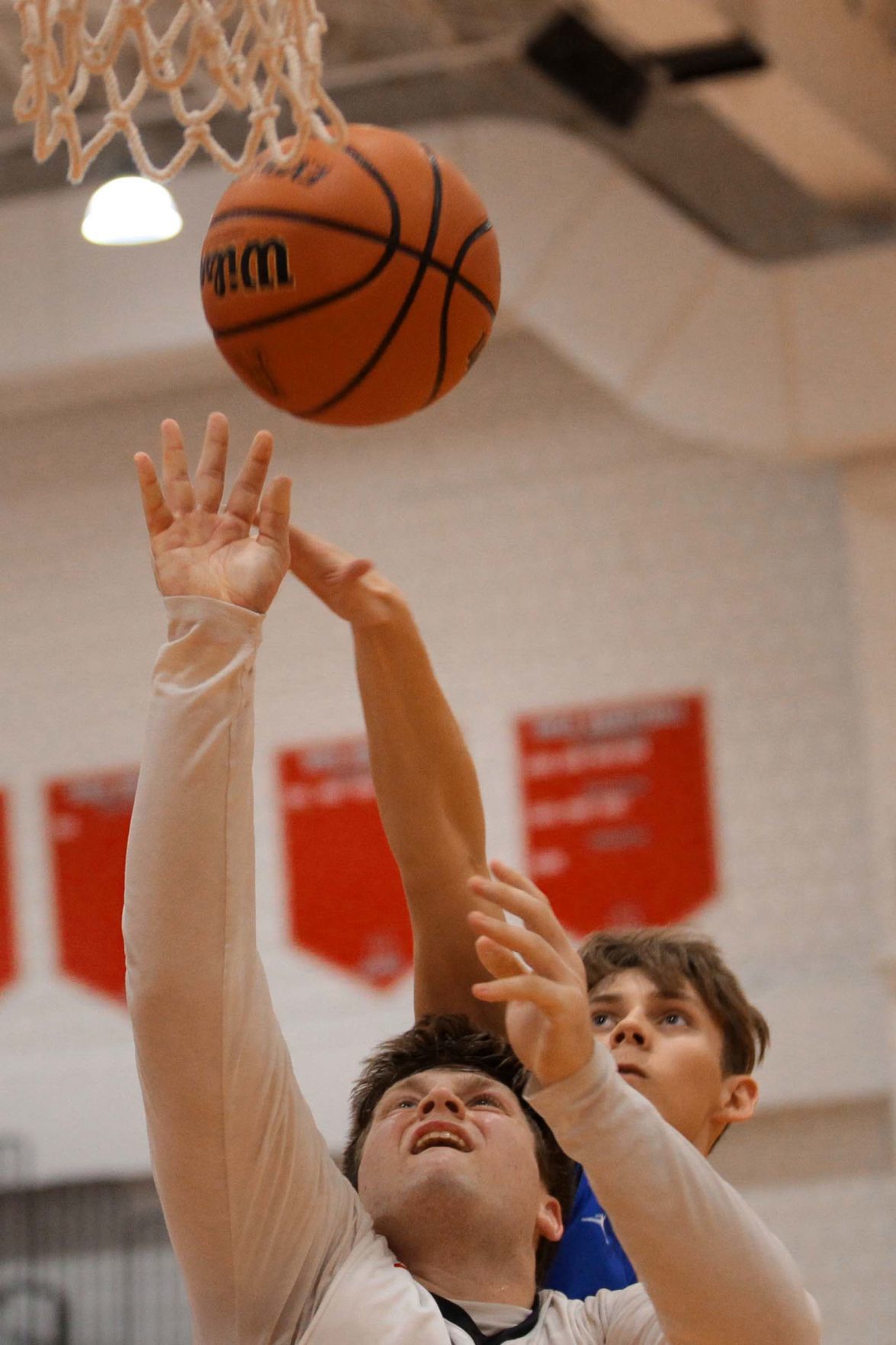 Trystan Bush of North Vermillion tries to block a shot by Brandte Gayler of Attica from behind. 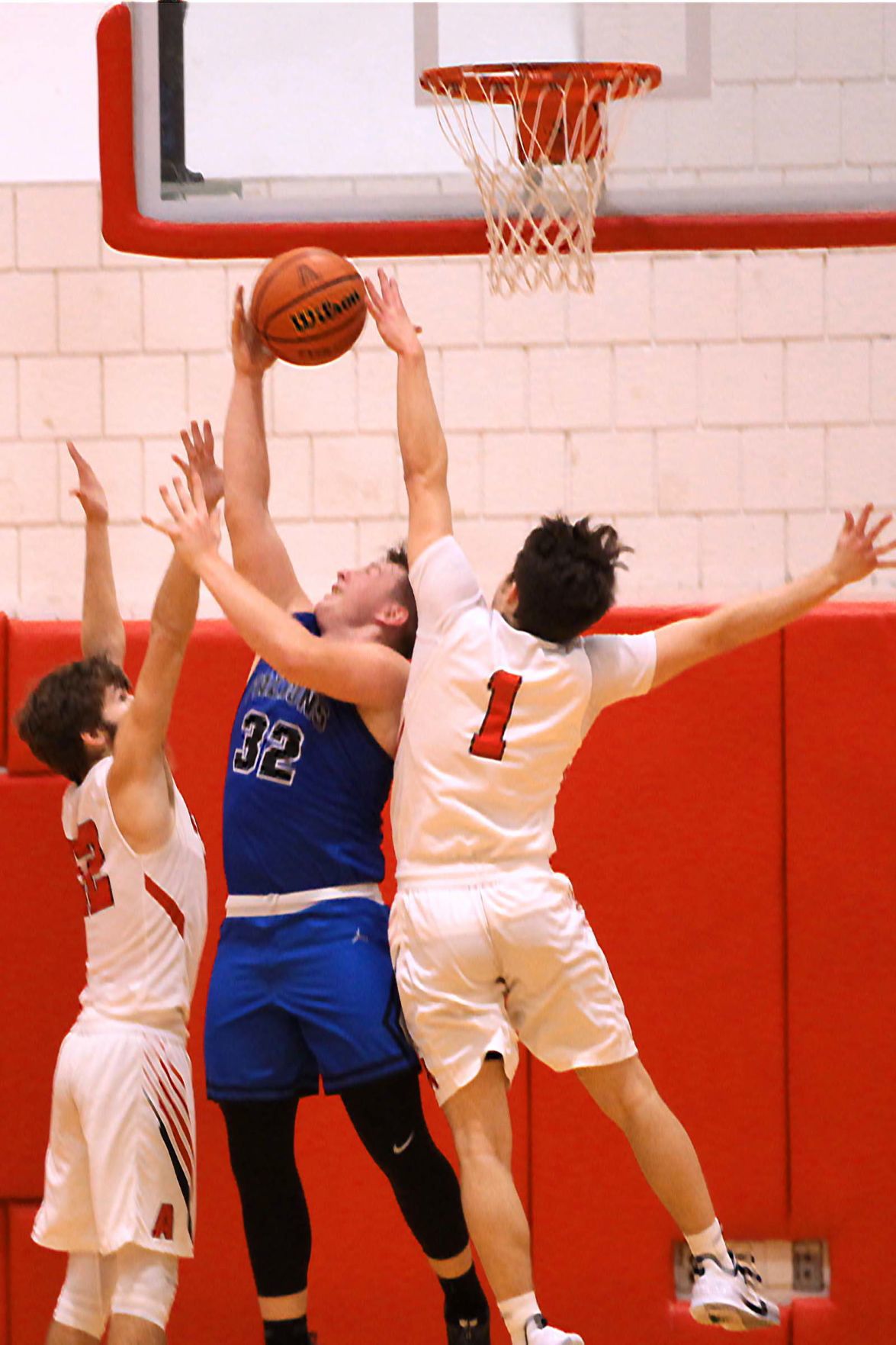 Ethan Watson of North Vermillion goes up for two of his game-high 15 points against Seth Hartman (22) and Dalton Bush (1) of Attica. 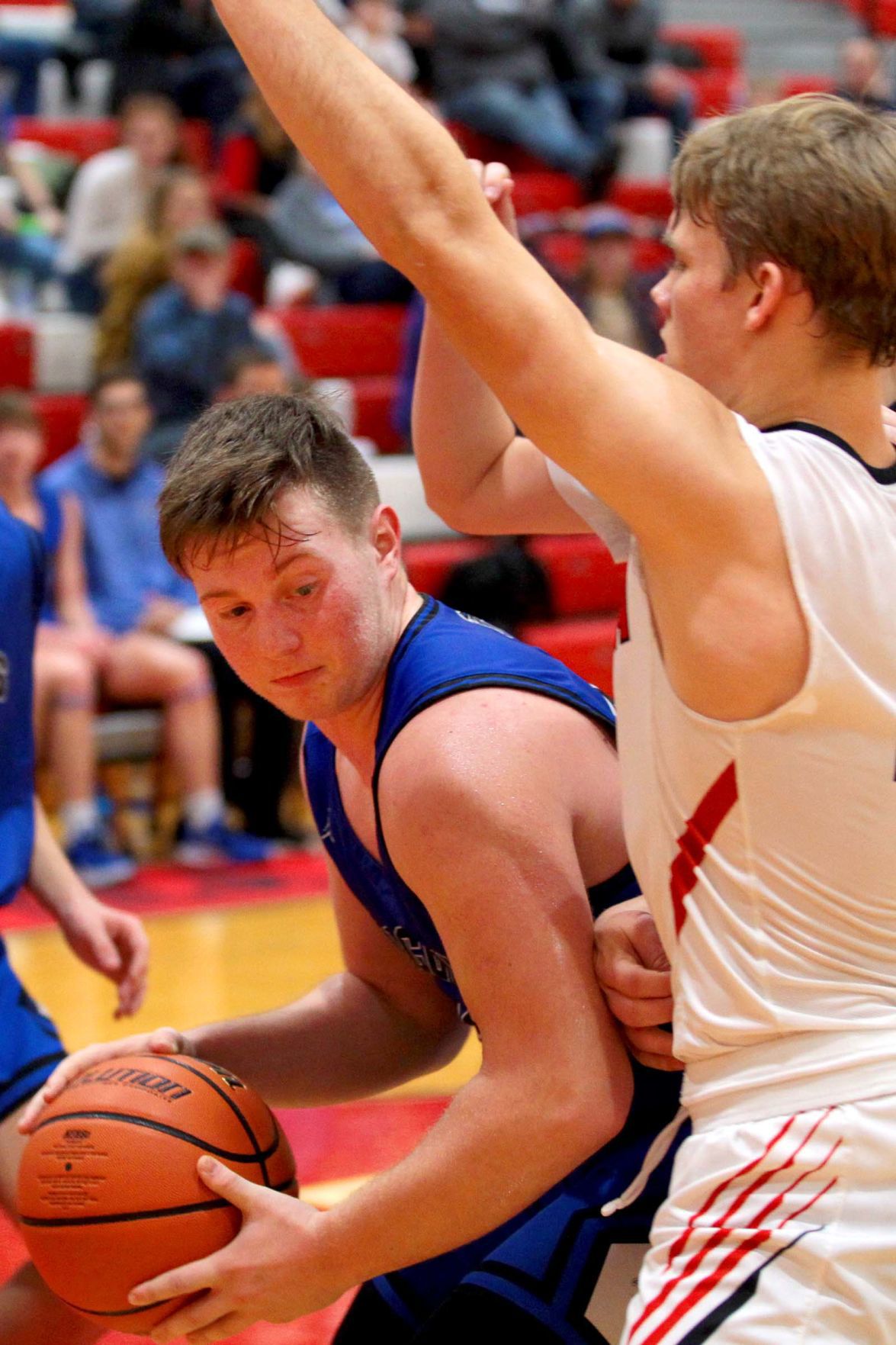 Ethan Watson of North Vermillion tries to spin past Eli Kirkpatrick of Attica. 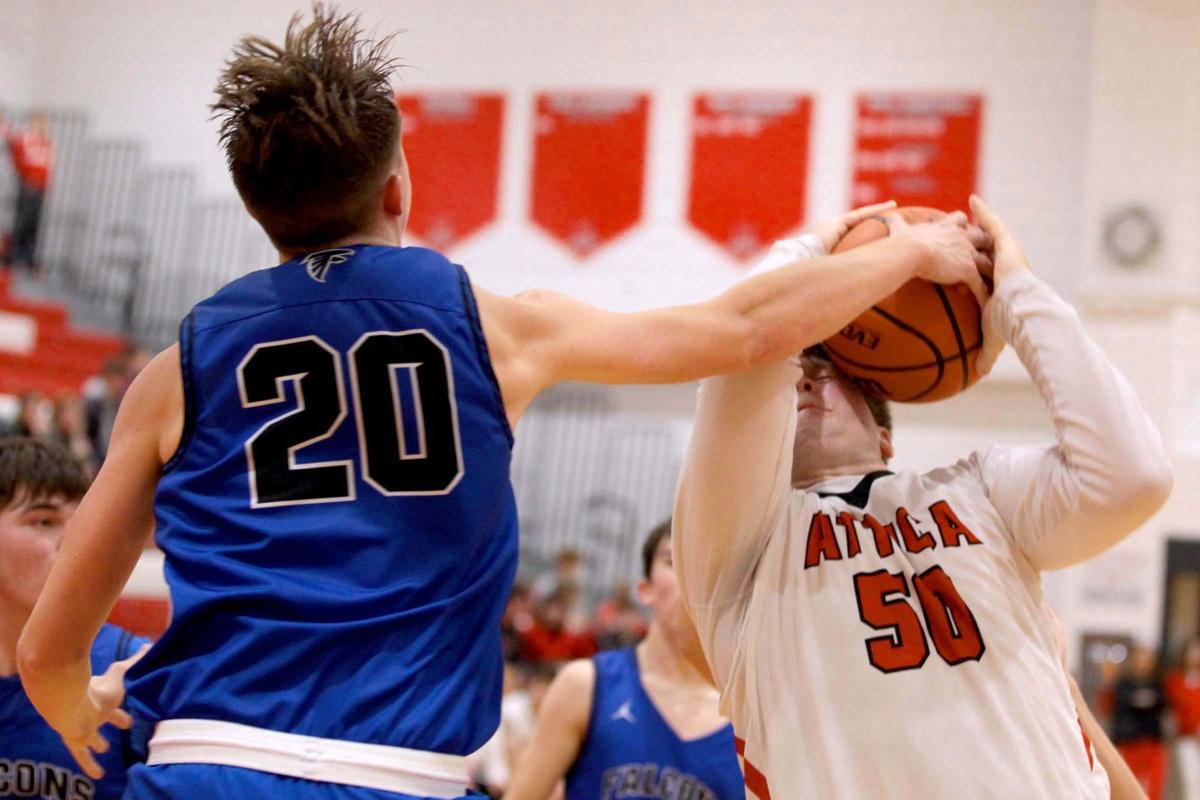 Dalton Bush of Attica passes the ball from the ground after several players hit the floor trying to get their hands on it.

Cam Moore of Attica puts up a runner in the third quarter.

Trystan Bush of North Vermillion tries to block a shot by Brandte Gayler of Attica from behind.

Ethan Watson of North Vermillion goes up for two of his game-high 15 points against Seth Hartman (22) and Dalton Bush (1) of Attica.

Ethan Watson of North Vermillion tries to spin past Eli Kirkpatrick of Attica.

Two teams that are looking for their identities faced off at Attica as they hosted the North Vermillion Falcons in boys’ basketball on Friday night.

Coming into the contest, the Red Ramblers had one win while the Falcons had two against a combined 18 losses.

Attica head coach Bruce Patton said his team had found its defensive identity as they had been practicing to become a more physical team, but that they were looking for who they are on the other end of the court.

Cody Wright, the first-year head coach of the Falcons, said he had put in a new offense for his squad but that they were still learning it, not surprising for a team with its fourth coach in five years.

Given all that uncertainty for both teams, it was not surprising that neither team was able to get off to a strong start.

It took almost two-and-a-half minutes for the teams to tie the game at two-all on a basket by Ethan Watson for North Vermillion followed by a lay-up by Eli Kirkpatrick for Attica.

Carter Edney gave the visitors their only lead of the night at 4-2 on a pair of free throws, but Dalton Bush tied it with a lay-up and then put the Ramblers ahead with a trey.

Watson pulled the Falcons within a point with a jumper, but a Brandte Gayler free throw and Jackson Davis three-pointer made it 11-6 in favor of the hosts after one period.

Davis opened the second quarter with a trey and then Kirkpatrick, Gayler and Bush pushed the score to 20-6 before Watson made a short jumper to stop the run.

Watson later added two free throws but they were offset by a late basket from Antonio Jerkins off a pass from Seth Hartman for a 22-11 score at halftime.

The third quarter started with four points from Watson that cut the Falcon deficit to seven but Davis restored the double-digit lead with a trey coming from an assist by Kirkpatrick.

Colby West converted a three-point play for North Vermillion and Landon Naylor added a basket to trim the gap to five at 25-20 with 3:46 left in the third period.

West would add another basket, but Attica would score twice with Jerkins and Hartman doing the damage for a 29-22 score at the end of the third quarter.

A three-point play for North Vermillion to open the final period was immediately offset by a trey from Davis, the sixth Attica three-pointer in the game against none for the Falcons to that point.

“It seemed like every time we’d make a run, they’d seem to hit a big shot, a three or something,” Wright said, “but we kept going.”

The Falcons began to pick up fouls as the period progressed and that would later cause the final margin to be wider than it was for most of the game.

Kirkpatrick made it a nine-point lead on a lay-up off and then Davis made a lay-up to restore the double-digit Rambler lead.

North Vermillion started to go cold, missing shots and then fouling trying to get the ball back.

Attica residents pull together to celebrate their hometown for Home Town

The team went about six minutes without scoring before Dalton Thomas hit a free throw, but by that time Attica led 38-26.

Gayler scored for the Ramblers but Isaiah Edwards answered with two free throws and then Watson hit a three at the 0:59 mark for the final Falcons points of the game.

In the final minute, Attica went to the line four times and converted six of eight free throws to inflate the final margin to fifteen at 46-31.

In his post-game comments, Patton said that perhaps his team had found their offensive identity and that getting balanced scoring in this game (three players in double figures and six scoring at least two points) may prove it.

“What we need to work on now is cutting down on mental mistakes,” Patton said. “We also need to know what we can do and what we can’t.”

For Wright, there were several positives in the loss.

“We picked up our defensive intensity,” he said. “We are learning patience with our offense and I think we got a lot of good looks from it, but the shots wouldn’t fall.”

Wright concluded by saying that his team is buying into what he is teaching them, but that what they need most is experience and the only way to get that is to play hard every game.