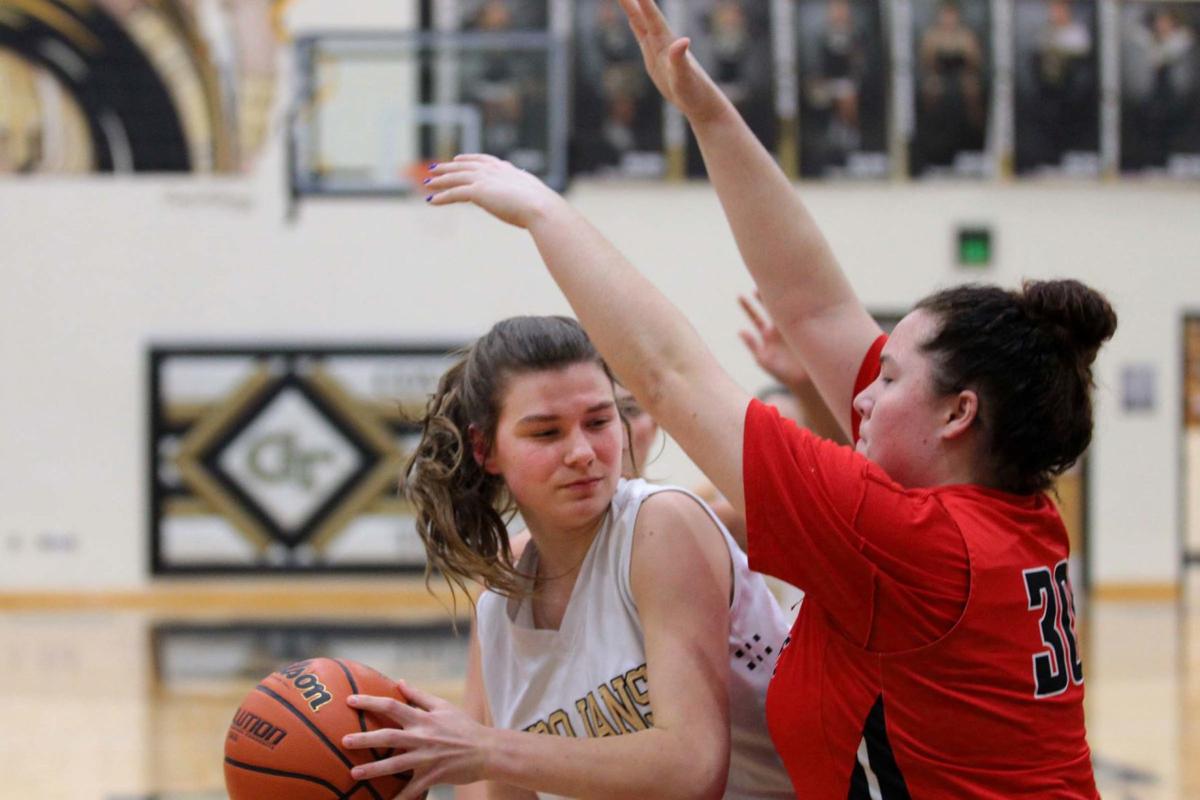 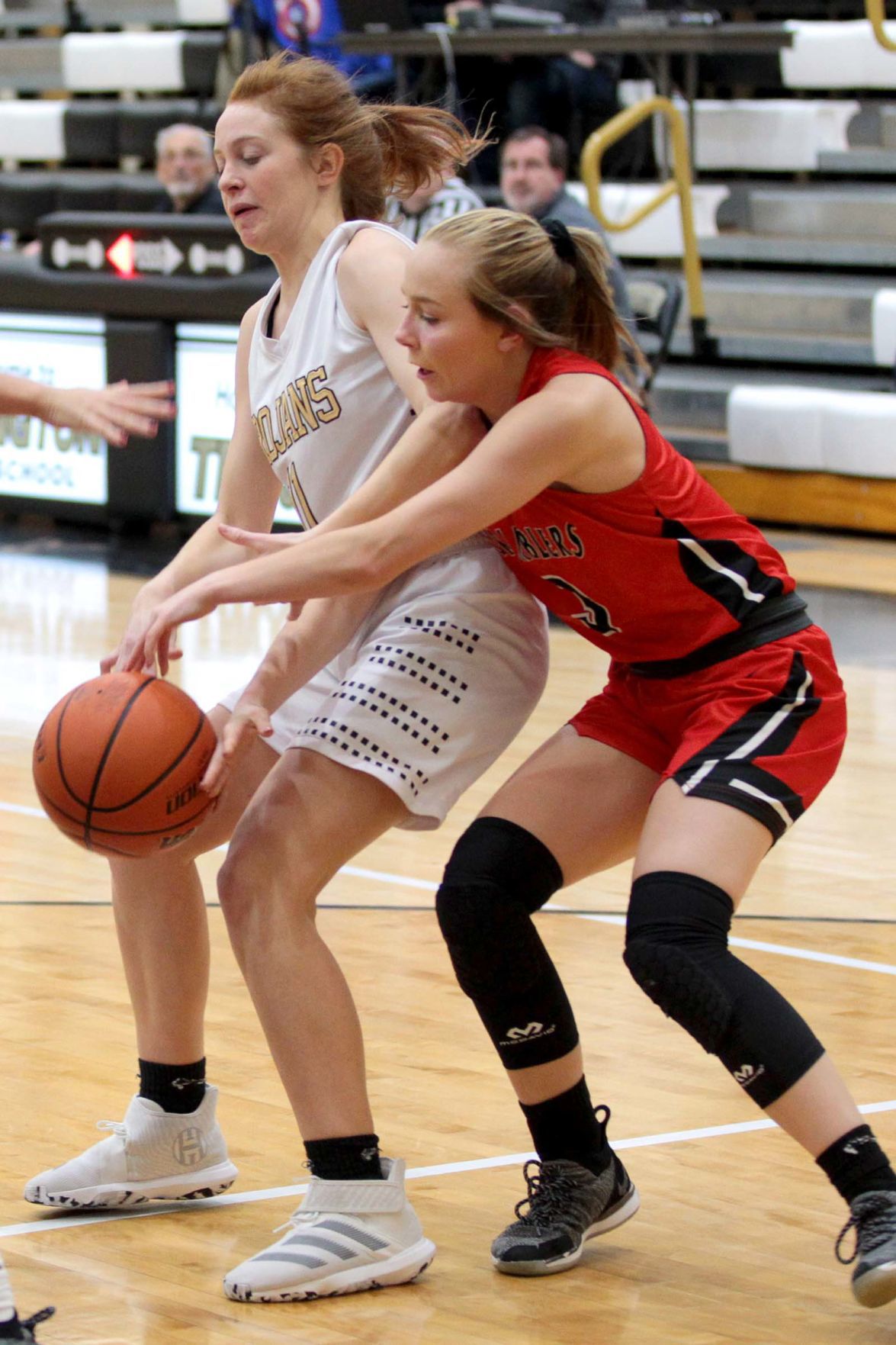 Charlie Moore of Attica tries to deflect the ball out of the hands of Reese Noble of Covington. 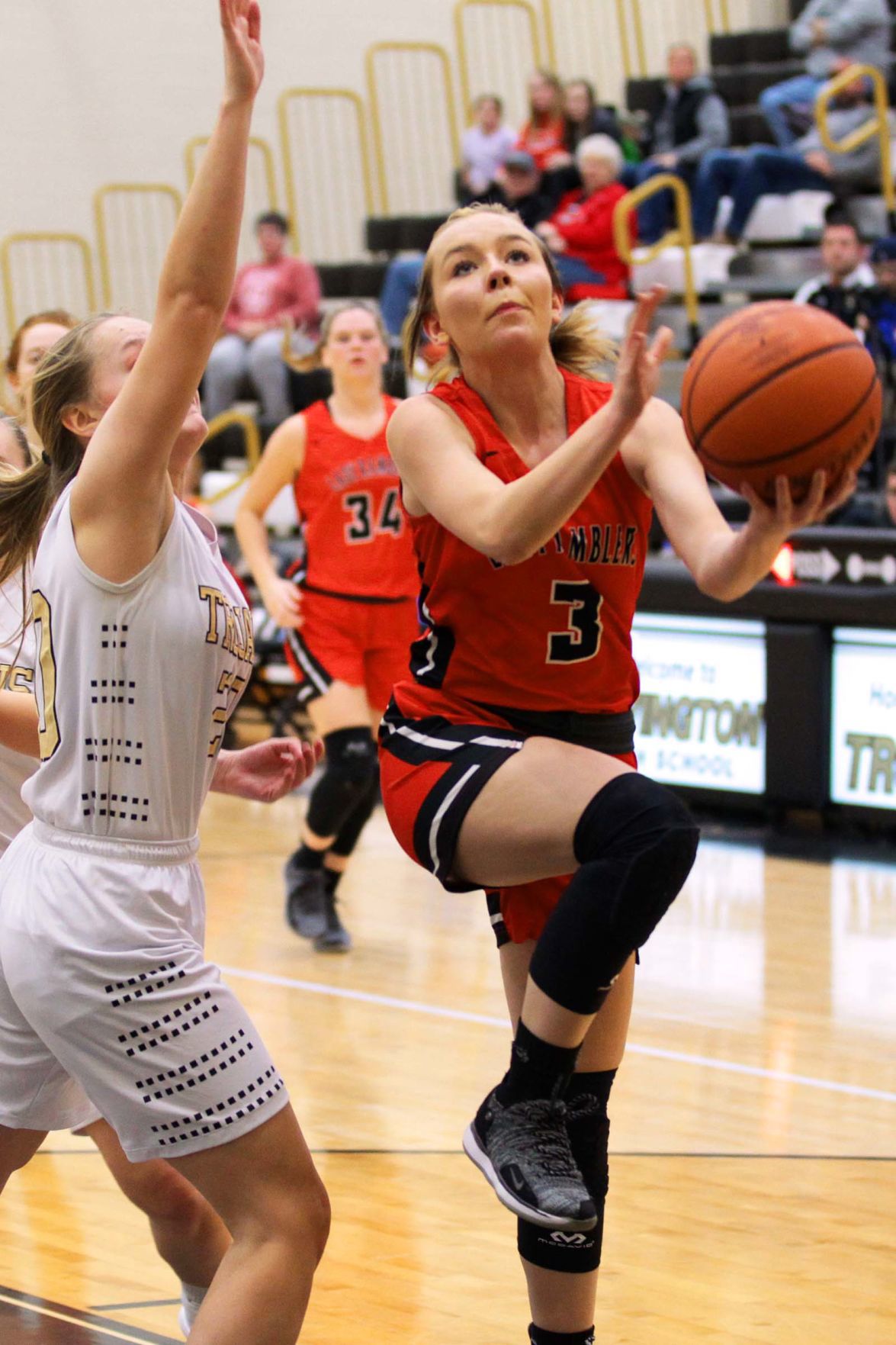 Charlie Moore of Attica goes up for a lay-up after driving past Abby Swaney of Covington. 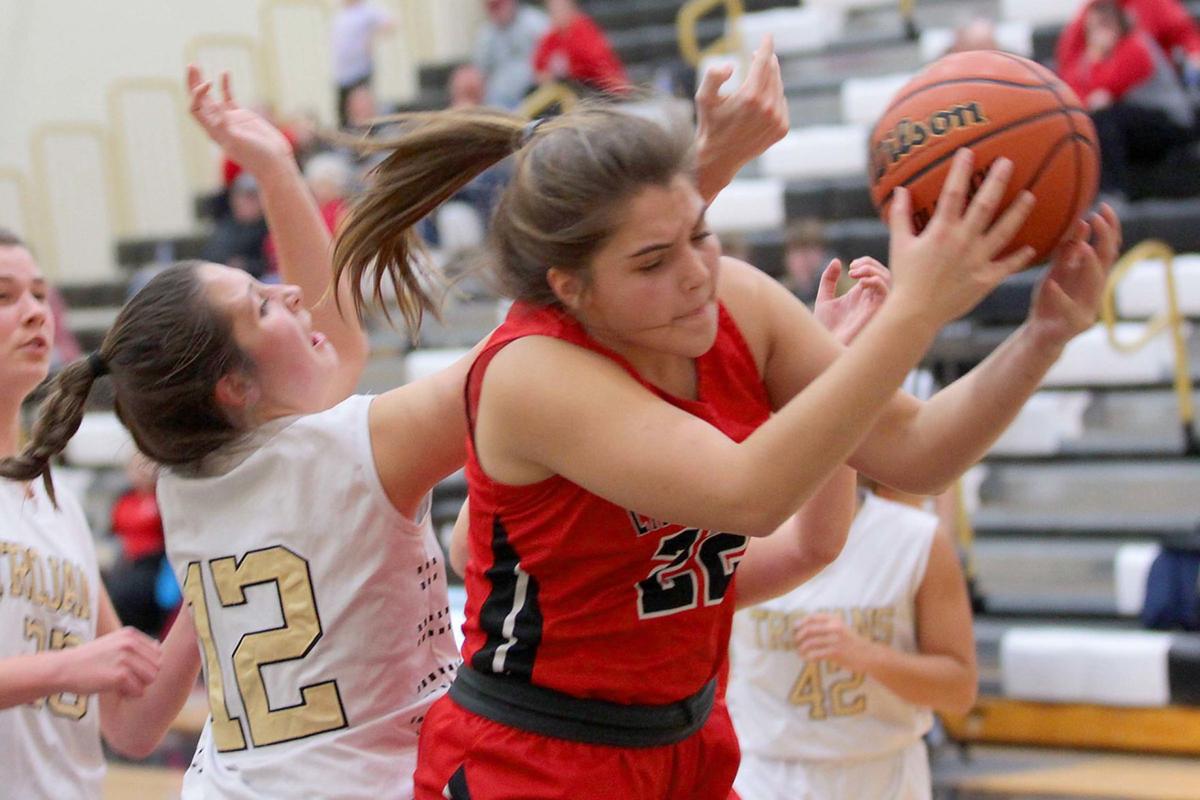 Briley Peyton of Covington reaches in vain for a rebound that falls into the hands of Tatum Nunnally of Attica. 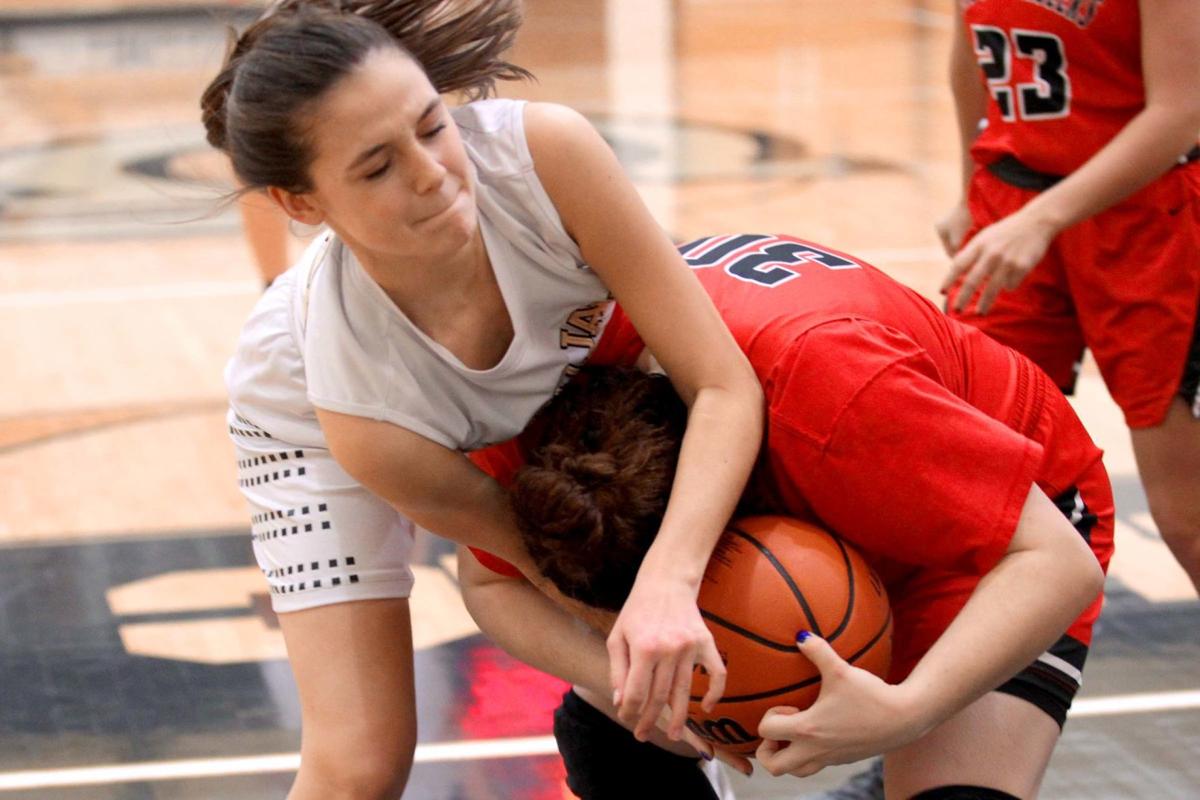 In a battle for a rebound, Hope Linville of Covington grabs the head of Keela Howard of Attica in addition to the ball. 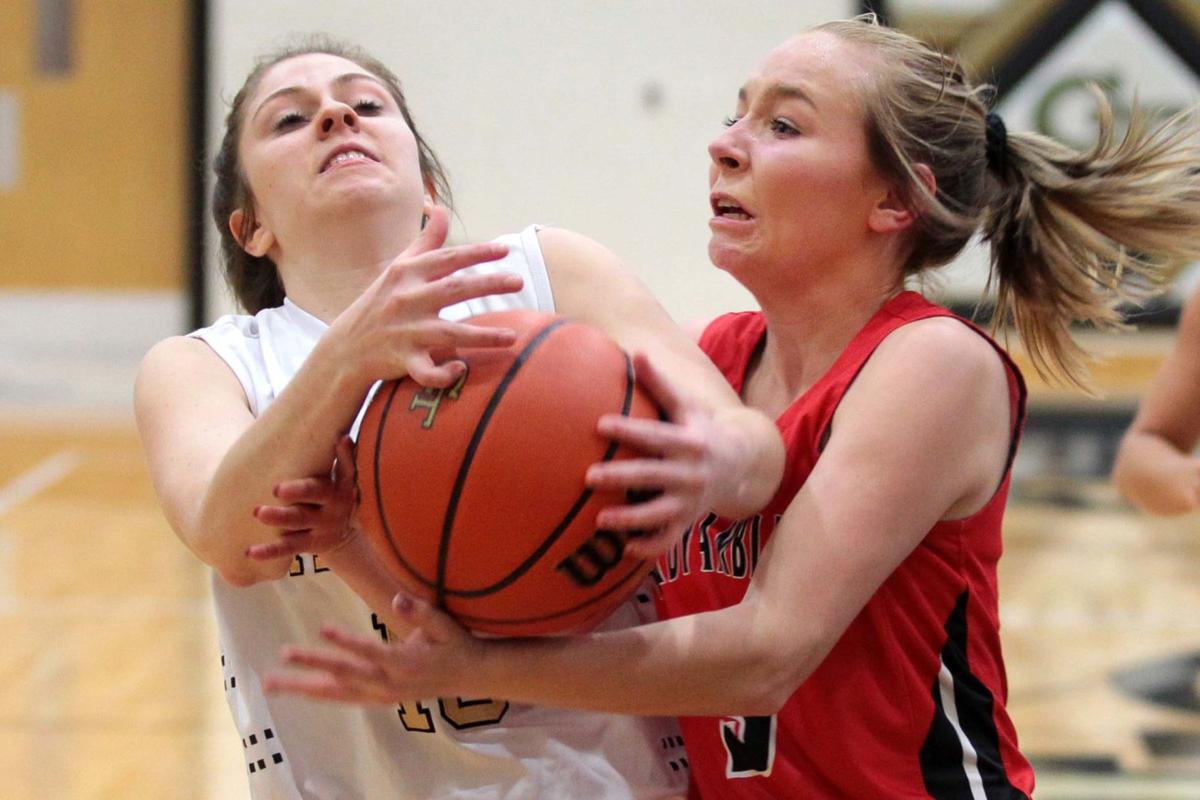 Paige Messmore of Covington and Charlie Moore of Attica battle for a loose ball.

Charlie Moore of Attica tries to deflect the ball out of the hands of Reese Noble of Covington.

Charlie Moore of Attica goes up for a lay-up after driving past Abby Swaney of Covington.

Briley Peyton of Covington reaches in vain for a rebound that falls into the hands of Tatum Nunnally of Attica.

In a battle for a rebound, Hope Linville of Covington grabs the head of Keela Howard of Attica in addition to the ball.

Paige Messmore of Covington and Charlie Moore of Attica battle for a loose ball.

One of the frustrating things about the local high school scheduling is that teams that face each other in the Bi-County Holiday Tournament have a fair chance of encountering each other again about a week or so after their meeting in the tourney.

That happened this year when Attica defeated Covington 42-39 in the opening round of the Bi-County tournament on January 3 and then met again on January 9 with the Red Ramblers coming from behind to win by the same margin of three, this time by the score of 36-33.

It was the Trojans, however, who opened the game on a strong note, getting a trey from Abby Swaney and a lay-up by Reese Noble off a pass from Hope Linville to take a 5-0 lead with three minutes gone.

Both teams seemed to be playing cautiously on offense, turning down open jumpers in the apparent hope of find a better shot, but for much of the first period, it simply meant empty possessions for each.

After Attica got on the scoreboard at the 5:08 mark on a driving lay-up by Keela Howard, no one scored for almost three minutes until Briley Peyton made a pair of free throws for the Trojans and a minute later Charlie Moore drilled a trey.

Covington got a putback in the final minute by Linville for a 9-5 lead after one quarter.

The Ramblers promptly took the lead as the second period began, hitting a pair of three-pointers, one by Tatum Nunnally and one by Howard for an 11-9 score.

Sadie Swift added a basket for Attica before Shiann Haymaker hit from beyond the arc to pull Covington within one at 13-12.

Three Trojan free throws followed in the final two minutes of the half to give the hosts a 17-13 lead going into the intermission.

The Attica fouls that led to the free throws drew the attention of Rambler coach Darrin Spragg who said, “We got into foul trouble late in the second quarter, but adjusted in the second half and played through it.”

The third quarter started with a pair of Attica baskets to tie the score, but Noble hit a trey to put the Trojans back on top.

Covington began to open the lead as the period progressed, getting baskets from Paige Messmore and Holly Linville for a five-point margin before Howard came through once again, hitting a trey to pull the Ramblers within two at 24-22 by the end of the quarter.

Travis Brown, the Trojan head coach, continued the experiment he started in the Bi-County tournament, doing complete line changes every couple of minutes, replacing one set of five players with another five off the bench and then flipping things repeatedly.

He said he was not as happy about the results in this game as he had been in previous matchup, saying, “It’s only good if both groups play hard and that didn’t happen.”

Swift gave Attica the lead as the fourth quarter started, converting a three-point play, but Covington retook the lead on a short jumper by Lauren O’Neill.

After an exchange of baskets, Covington went up three at 30-27 when Messmore made a pair of free throws at the 4:00 mark.

Five seconds past that, Moore did the same for Attica, but the Trojans restored their three-point margin when Peyton put back a missed shot.

Moore and Howard then each made one of two free throws for Attica to make their deficit one, but Hope Linville made one of two as well to give Covington their last lead of the night at 33-31 with 2:52 remaining.

In the next minute, neither team could find the basket despite each calling a timeout in the span, but then Moore hit a trey for a 34-33 lead for the Ramblers at the 1:44 mark and then added two more free throws for a 36-33 score.

Covington put Attica to the line again and this time the Rambler player missed both free throws, but the Trojans could not beat Howard to the rebound and the visitors ran out the clock despite missing two more free throws in the final two seconds of the contest.

“I think we played pretty well,” Spragg said about the game. “We kept adjusting and picked up a win against a sectional team we may see again.”

Brown also thought his team played well at times, but noted that Attica “got to all the 50-50 balls despite our battling for them”.

Both coaches looked ahead to their next opponents with Spragg saying they have a tough one at North Vermillion, the second-place team in the Wabash River Conference, and Brown saying he had not yet had time to look at video of 2A Rossville.