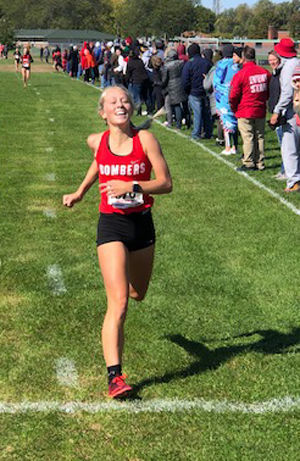 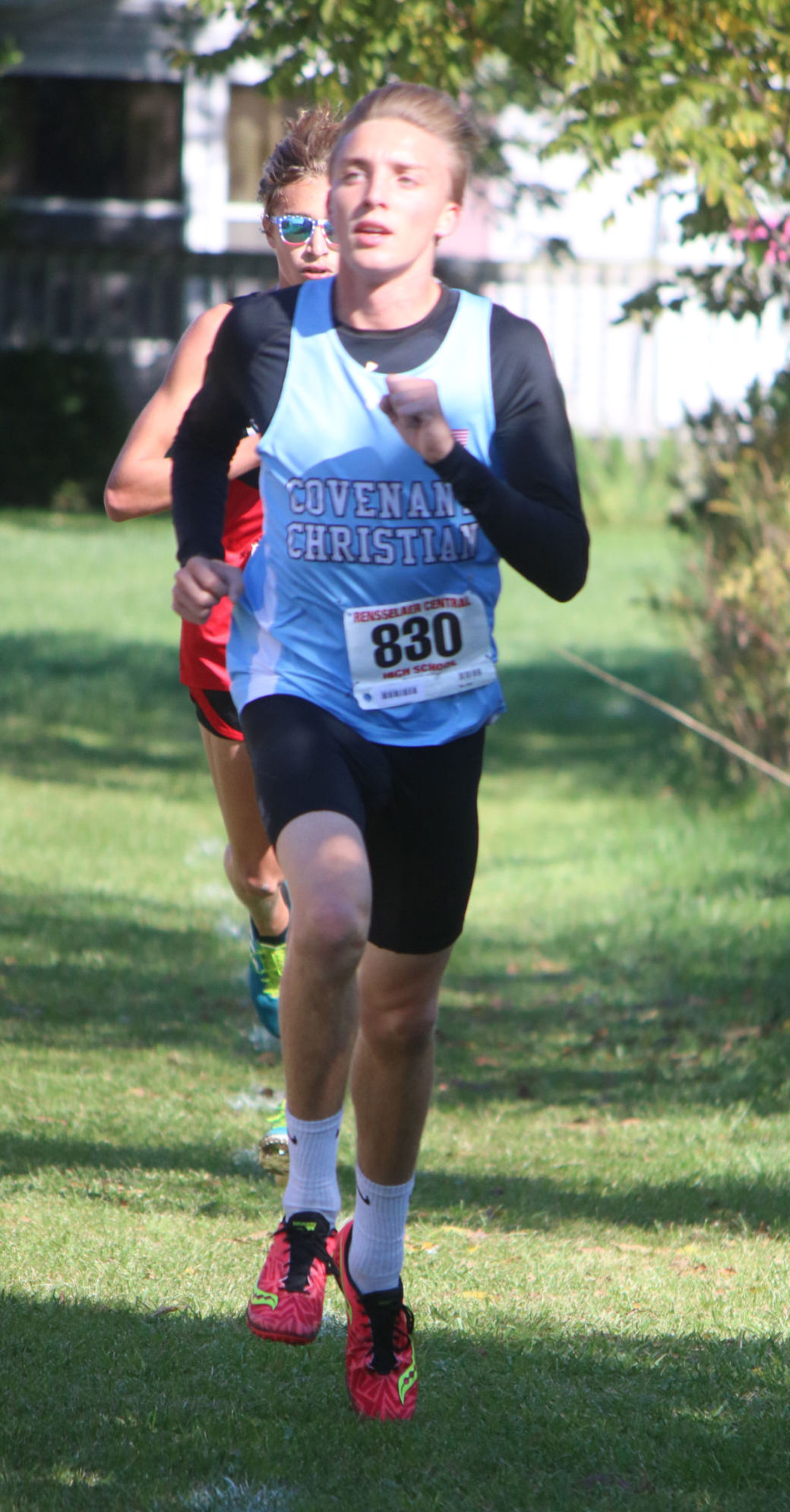 Covenant Christian senior Kohler Peterson made school history with his individual title in the boys’ race on Saturday. 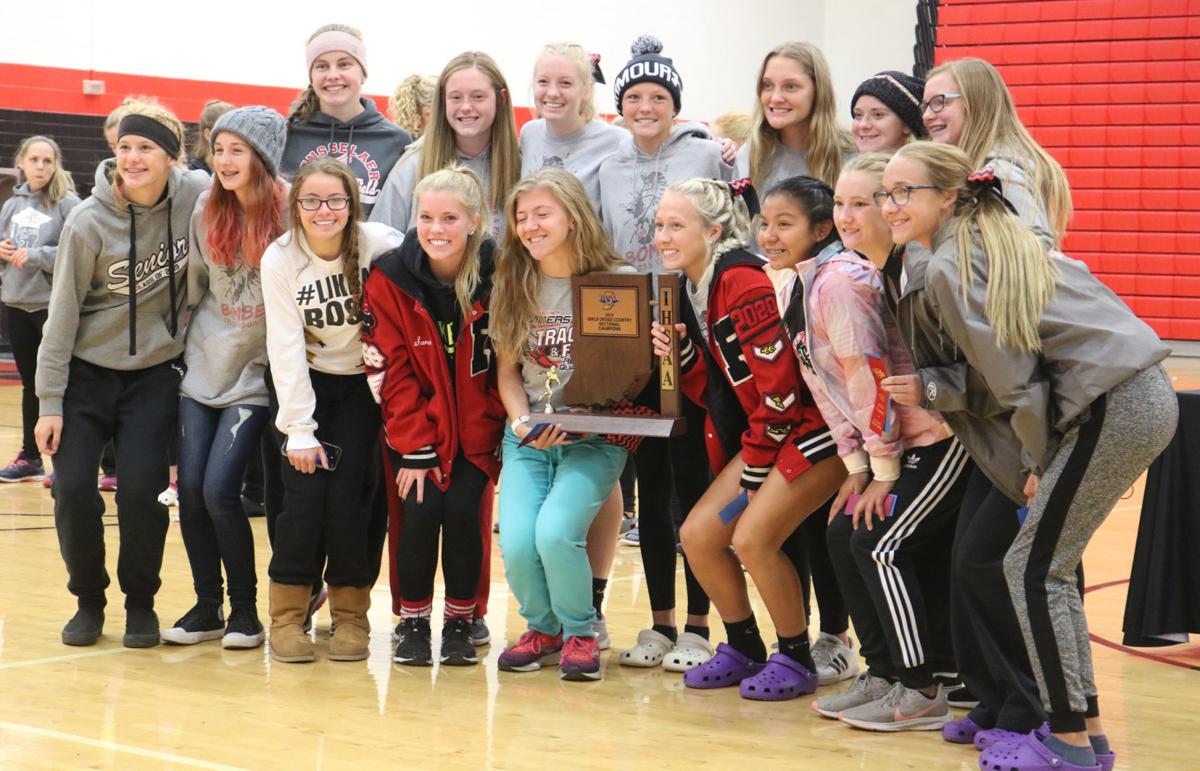 Saturday’s cross country sectional team title is the second in as many years for the Rensselaer Central girls’ team.

Covenant Christian senior Kohler Peterson made school history with his individual title in the boys’ race on Saturday.

Saturday’s cross country sectional team title is the second in as many years for the Rensselaer Central girls’ team.

Wuethrich sped past Kouts’ Kassidy Gregory in the race’s final 400 meters to claim her second straight individual title. Sophomore teammate Amzie Maienbrook also slipped by Gregory — a freshman competing in her first sectional — in the final loop to claim second for the second straight year.

Wuethrich didn’t let the wind stop her from making a move late in the race.

“The worst part was probably the back stretch because the wind was coming at you,” she said.

The Bomber senior ran side-by-side with Maienbrook and was just a couple of paces behind Gregory before kicking it into another gear.

“By the bus barn, that’s where I told myself it’s time to go if you want to win a sectional title,” Wuethrich said. “I’ve been running this course for four years, so I know if like the back of my hand. I just said I’m a senior. It’s time to go get it.”

It’s the first time this year that Wuethrich beat Maienbrook, who came into the season in terrific shape after a busy summer road schedule.

Peterson, meanwhile, withstood challenges from a pair of Kankakee Valley runners — sophomore Justin Hoffman and senior Ethan Tillema — to win his first individual title and the first ever by a Knights runner. His time of 16 minutes, 40.34 seconds was nearly six seconds better than Hoffman’s 16:46.21.

Both are considered fast times on a crisp, cool day that featured strong winds that pushed and pulled runners over the 3.1-mile layout.

“Justin Hoffman, I knew he would be one of those guys who would try to keep up with me,” Peterson said. “We’ve been competing this whole season and we have that back-and-forth mentality. I just had to keep an eye on him.”

Tillema was third in 17:10.11. He was one of five KVHS runners in the top 17, helping the Kougars claim their second straight sectional title.

“Morgan ran well today,” KV coach Tim Adams said. “We were concerned there at the finish. I think they’re pretty young, so they are absolutely on the ascent. They made it a very challenging race.”

Hoffman came into the race with laser focus after he was inadvertently tripped by Peterson in the two-mile race at Rensselaer’s track sectional last year.

“Jacob was a little motivated,” Adams said. “He had that in his mind as a motivator all year.”

Peterson finished fourth at sectional last year, with former teammate Carson Bakker, who was on hand Saturday to give Peterson vocal support, finishing second. Bakker, a 2019 graduate, joined the cross country team to give the Knights another body in practice.

Bakker would go on to qualify for the state meet last fall.

“When I started I never thought I’d ever be a sectional champion one day,” he said. “Carson helped me with that the last two years. He was a person who kept pushing me to get faster, and now it’s nice to be able to say thanks for the help. Here is the result. It was nice to show him he’s more than just a teammate.”

“Micah’s been fighting some kind of illness and he’s been 45, 50 seconds off his time and it wears on him,” Adams said of his son. “But he fights tremendously well between his ears. Trenton Thomas has been our story. He’s really come a long way in a year’s time. And then you have Adam Collard, another sophomore.

“We were hoping to be here.”

Adams now hopes his team can break through at the regional level on Saturday. KV has been unable to reach the semistate over the past decade or so.

“It’s no secret that the next step at regional has evaded us the last 13 years, since this sectional was reassigned to a northern regional,” Adams said. “We’ve got to run better than we did today to give ourselves the best shot to take the next step. It looks to be more manageable this year, but you never know.”

“We were close (to winning sectional) last year,” Bombers coach Sid Dobson said. “But we had the freshmen girls coming in then you’ve got Piper, a senior, coming in. They knew what they had to do and today they ran hard.”

Pinkerman’s ability to break up Morgan Township’s pack of four runners (5th and 6th, 8th and 9th) proved to be the deciding factor in Rensselaer’s team victory.

“On the first lap, I was watching Rheannon, Baylie and Piper and Piper was ahead and the Morgan girls were like 40 yards ahead of everybody,” Dobson said. “I thought, well, this is going to be a long race. I knew in the back of my mind that Rheannon and Baylie are faster in the second half. On the second lap, I was in front of the school and they were right on Morgan Township’s tail. I thought, now it’s a race. You’ve got to break up that pack of four (Morgan girls), and I thought they both could do it. Rheannon has an energy level like you can’t imagine and she broke them up.

“That’s the first time I can remember we had all seven girls in the top 20. They came to run.”

Set to join the Bombers at Saturday’s girls’ regional meet in Chesterton are Morgan Township, Kankakee Valley, Kouts and North Judson. The top five teams and top 10 individuals not on a qualifying team will compete at Sunset Hills County Park, which is hosting a regional meet for the first time.

Morgan Township was the second team to score in the boys’ race, followed by Rensselaer Central, Kouts and Knox.

Locally, RCHS freshman Tristen Wuethrich overcame a bruised toe to finish fifth overall in 17:35.01. He was one of only two freshmen to finish in the top 10, with Ty Ivanyo of Morgan Township (eighth in 17:45.53) the other.

“JP, he’s a master at work,” Dobson said of Parrish. “His work ethic is second to none. He’s a football player really and today he’s running ninth on a windy day. He can crack open a high 16 just like Tristen can.”

Dobson praised the performance of his boys’ runners, from one to seven.

“Camden has been more solid, more consistent in his times,” he said. “Our seniors have been great. Rodney (Woudema) put in a lot of work this year. They are some of the best leaders I’ve ever had in cross country. And Nolan (Potts), Will, Geoffrey and Conner (Parker), they just close that pack up and magic happens.”