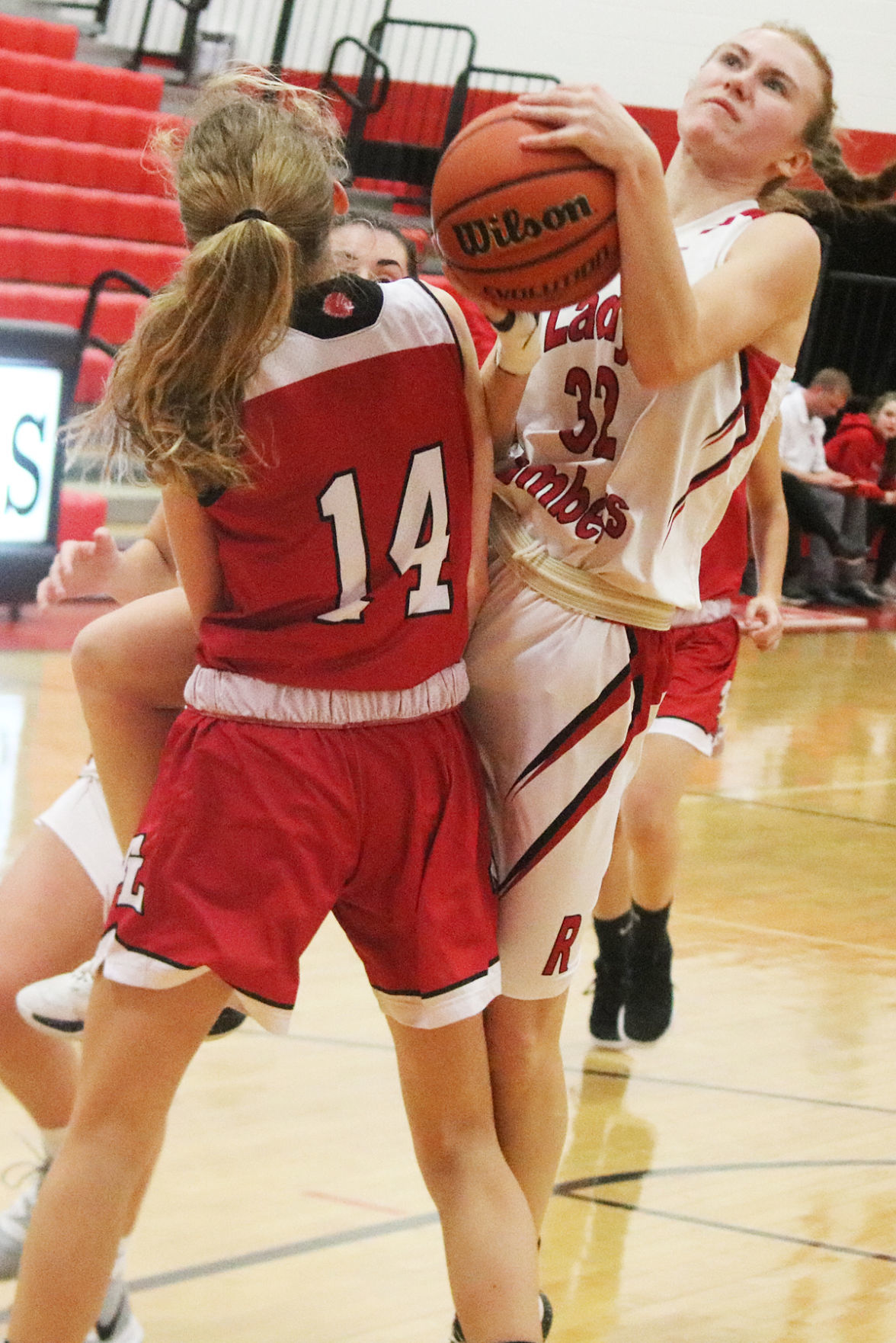 RCHS sophomore Jessie Ringen had a strong start to the game Tuesday, finishing with 13 total points in her team’s win. 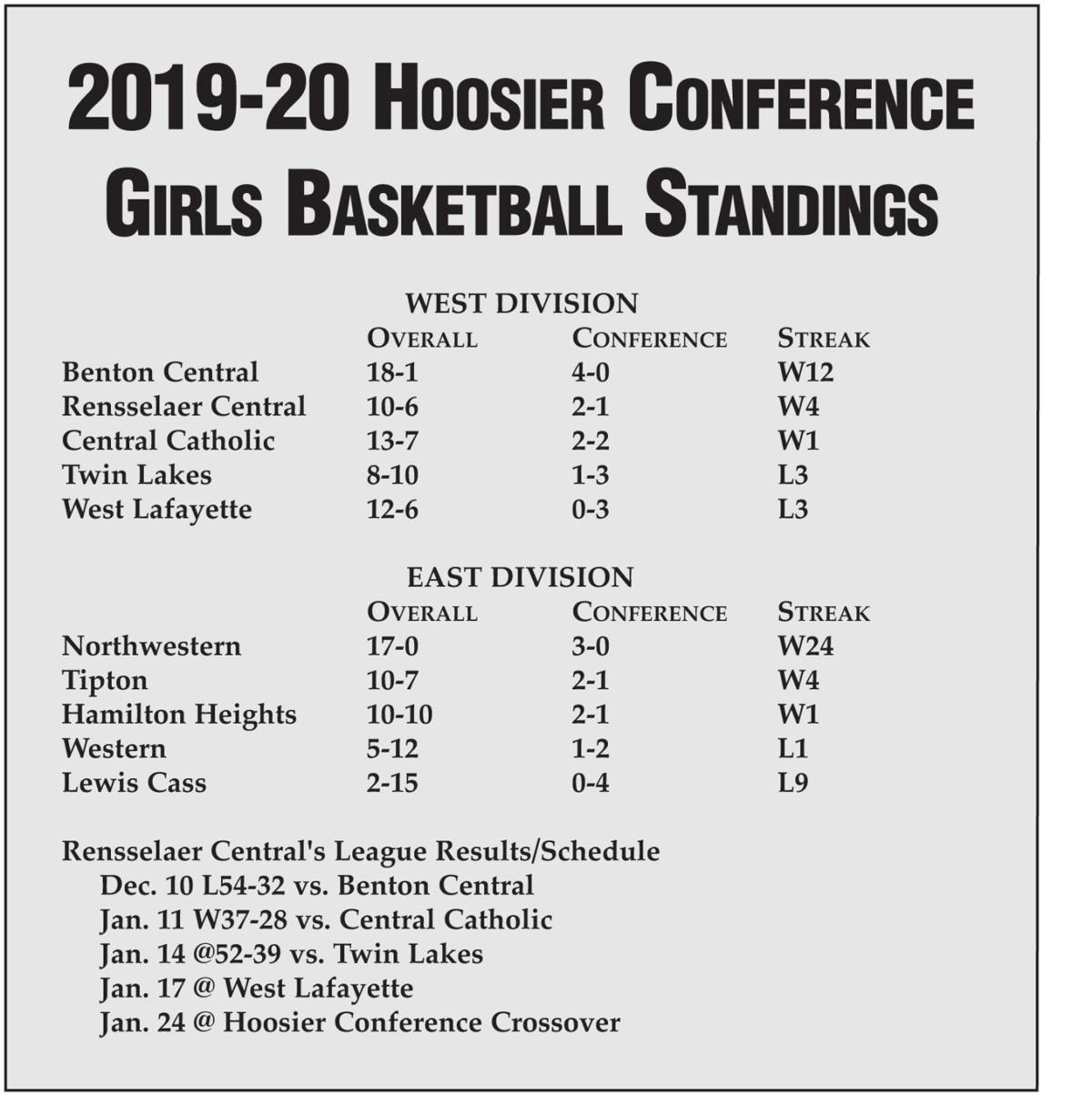 RCHS sophomore Jessie Ringen had a strong start to the game Tuesday, finishing with 13 total points in her team’s win.

RENSSELAER — No team in the Hoosier Conference fields a lineup as young as Twin Lakes.

The Indians start four freshmen and showcase eight on the varsity roster.

Besides being the youngest, the Indians also have one of the quickest teams in the league. But Rensselaer Central blanketed Twin Lakes’ ball-handlers with a suffocating defense Tuesday in a lopsided 56-39 conference victory at Joe Burvan Gymnasium.

But the Bombers (10-6, 2-1) responded with three straight baskets — two by senior Lexi Healey and another by sophomore Abby Ahler — to reclaim a double-digit lead. The Indians never got closer than 11 the rest of the way.

“They may be freshmen, but they’ve played 17-something games, so they’ve been seasoned and seen a lot of things,” Bombers coach Wes Radtke said. “We had to be very selective with what we were tying to do. They have really good speed, so that was hard to match in practice.

“We didn’t handle their quickness very well at times. We got ourselves back on our heels a little bit. We weren’t ready the ball screen and coming off that screen hard. We caught watching the paint dry sometimes. We can’t make people miss or get out of their game plan if you don’t jump in their path and get them before they get to the basket or you foul them. We made some adjustments, but overall I thought we played well.”

Twin Lakes struggled to defend Rensselaer senior forward Sydney VanMeter, who used her 5-foot-10 frame to knock down shots on the perimeter. She finished 6 of 15 from the floor and had a game-high 17 points with six rebounds.

“We just get the ball out and push, not rush shots, swing it … we’ve been running our offense really well; cutting through and hitting the open man,” Sydney said.

Sophomore Jessie Ringen added 13 points, including eight in the first half. Healey and Ahler added 10 points each and sophomore guard Avree Cain had six rebounds.

The Indians got 16 points from freshman Evelyn Sharer, who hit 7 of 16 shots and added a game-high nine rebounds. Hodgen hit 5 of 7 shots, including all three of her 3-point attempts, to finish with 14 points.

Twin Lakes hit a collective 14 of 40 shots and committed 20 turnovers, with many of those coming in the halfcourt.

“Coach says he wants it to look like there’s more than five out there,” Sydney VanMeter said. “We just fly around, try to trap and get the ball.”

The Bombers hit 23 of 43 shots from the floor and held an opponent under 42 points for the fourth straight game.

“We finally have the athleticism to do some things and the kids are buying into it now,” Radtke said of his team’s defense. “They’ve heard it for four years from me and they’re starting to see some pay-off for it. They’re seeing that it is fun to play that way. It’s taxing at times in practice, but it pays off on game day.”

The Bombers have won six of seven games, with the one loss to Sullivan at the Greencastle Tournament after Christmas still gnawing at many of the players.

“We wanted to win that (tournament) so bad and we came up short,” Sydney said. “Ever since then everybody is looking at sectionals and getting ready for that.

“I think everyone is bonding more and working really hard a practice. We’ve always worked hard, but we’re working way harder than usual.”

Some clouds in the morning will give way to mainly sunny skies for the afternoon. High 24F. Winds N at 10 to 15 mph.