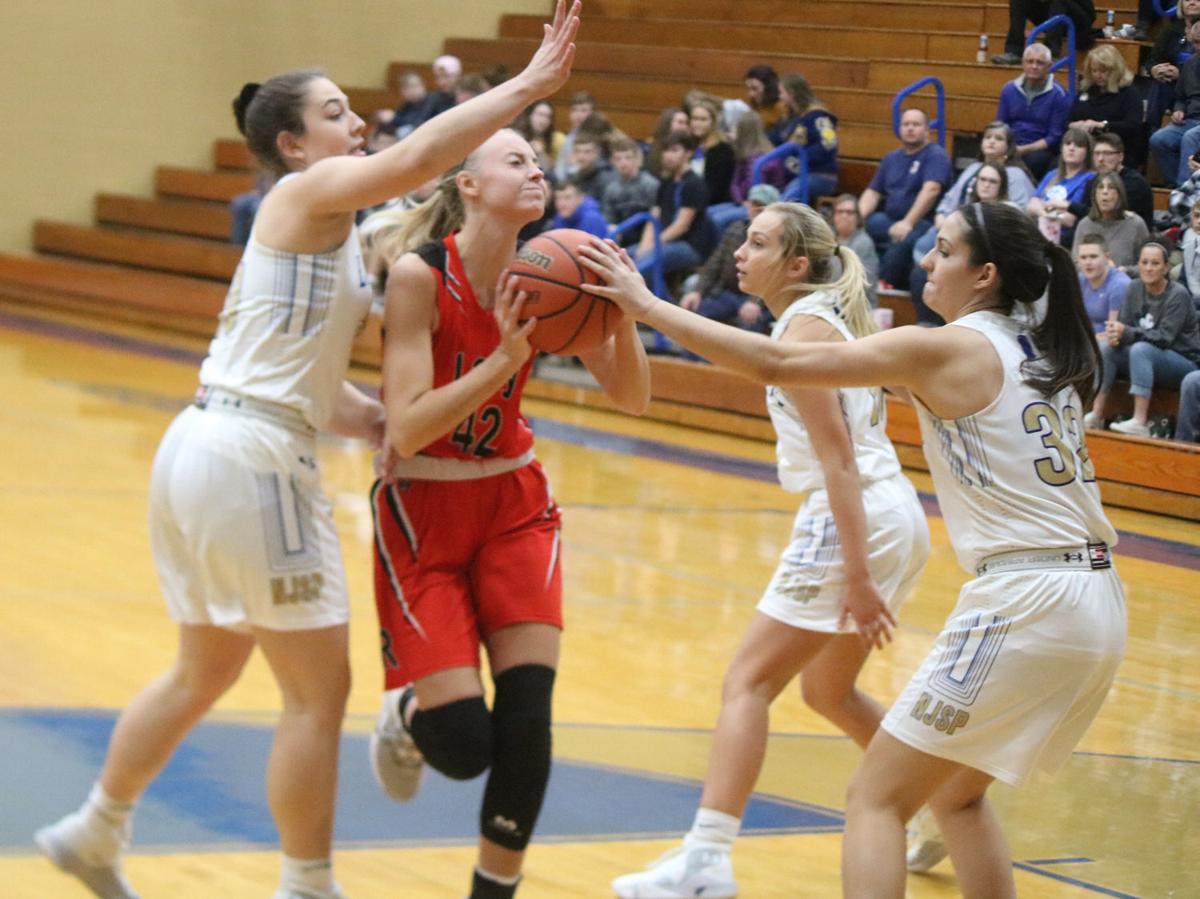 RCHS senior Sydney VanMeter splits North Judson’s defense during a drive to the basket Saturday. VanMeter hit a pair of 3-pointers to finish with a team-high eight points. 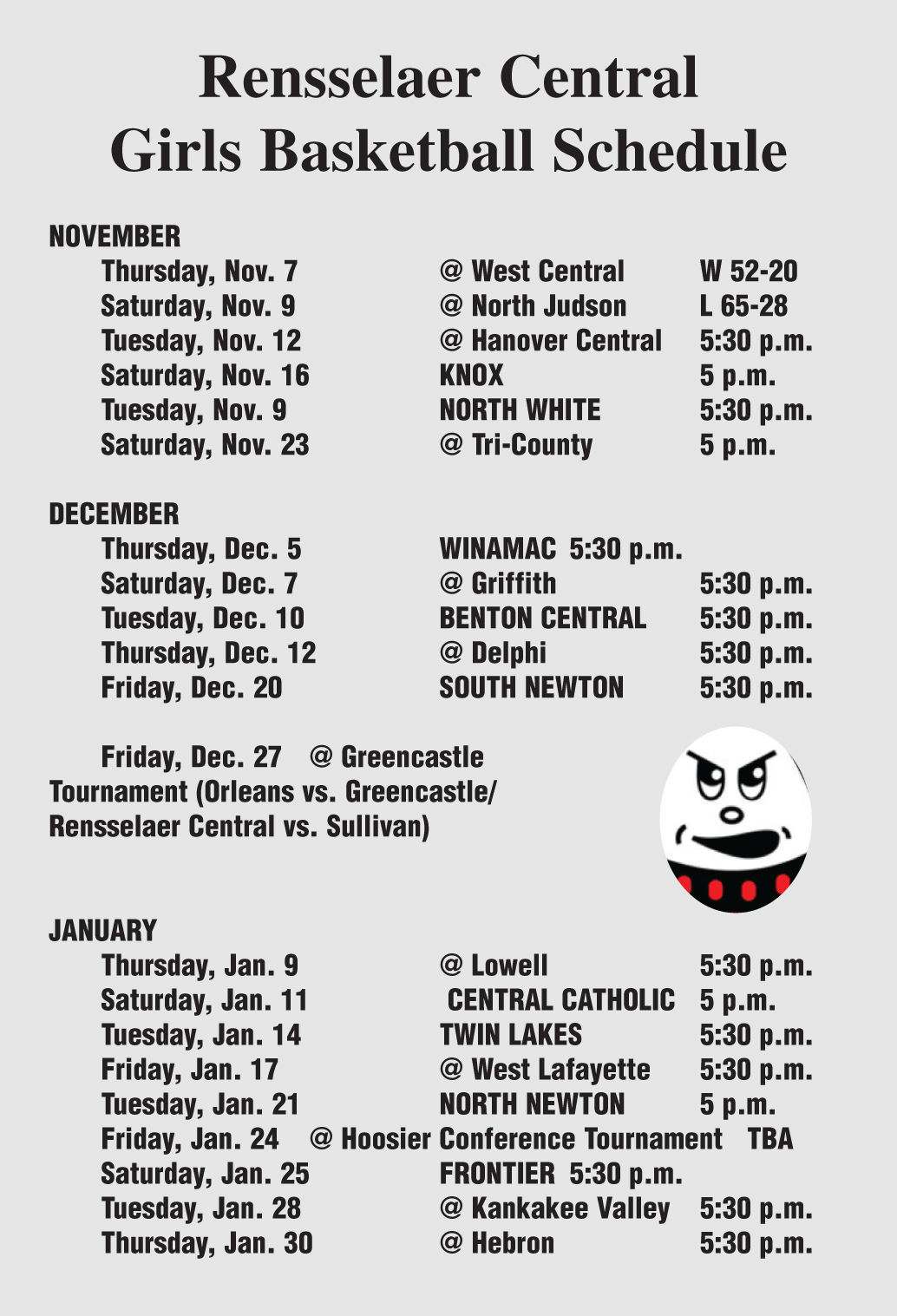 RCHS senior Sydney VanMeter splits North Judson’s defense during a drive to the basket Saturday. VanMeter hit a pair of 3-pointers to finish with a team-high eight points.

NORTH JUDSON — Rensselaer Central coach Wes Radtke is anxious to see how his team performs when everyone is healthy.

Until then, he will likely endure painful losses like the one the Bombers experienced at North Judson Saturday night.

With sophomore Jessie Ringen — the team’s No. 2 scorer coming into the season — relegated to the bench with an ankle sprain, No. 1 scorer Sydney VanMeter, a senior, still testing a knee that has been surgically repaired and sophomore Morgan VanMeter nursing a back injury that may take some time to heal, the Bombers (1-1) still had hopes of being competitive against the state’s No. 2 ranked Class 2A squad.

And for the first eight minutes, they did just that, trailing by a 9-7 score after the first period. But poor shooting (2 of 10 in the first quarter, 1 of 7 in the second) and foul trouble caught up with the Bombers, who were outscored 20-3 in the second quarter to fall behind 29-10.

“We had the shots, we had the looks … we didn’t hit shots,” Radtke said. “If some of those go down, it’s a different game, we get a little more confidence in what we’re doing and some of these younger girls we’re playing get some confidence in what they’re doing. It might be a different outcome then. But the wheels fell off, they were hitting their shots and we didn’t respond very well for awhile.”

The Jays (2-0) would go on to roll RCHS by a 65-28 final in a meeting of sectional foes. The principle player in the rout was junior Lilly Frasure, but she was assisted mightily by teammates Abby Chambers, whose 3-point basket highlighted a 13-1 run by the Jays, and Jordyn Dusek, who had five points in the second.

“Again, it’s one of those situations where they don’t hit a shot any other time, but against us they hit everything,” Radtke said. “You pick your poison there and try some different things and it’s frustrating when the kids do what you say and they put up a shot and it goes in. They look at you like, what do you do with that? You just have to keep going and trust the process we’re trying to get done.”

Frasure had just three points in the period, but her teammates combined for 17. The Bombers, meanwhile, got a lay-up from sophomore Kaylee Tiede-Souza late in the first half and a free throw from senior Lexi Healey.

Healey was given the assignment to slow Frasure, the Jays’ all-state guard, and performed admirably. Frasure had just eight points, but contributed in other areas to help her team extend its lead.

Healey was called for two fouls in the first quarter and another in the second to send her to the bench. Point guard Avree Cain, a sophomore, also played with four trouble, collecting three before the end of the first half.

Radtke threw a handful of bodies at the playmaking Frasure, who finished with 25 points, 15 rebounds, 11 steals and seven assists. Dusek added 11 points, including three 3-pointers, and Chambers had 10 points.

The Jays hit eight 3-pointers in the contest, including five in the fourth period when the game was well out of the Bombers’ reach.

Sydney VanMeter led the Bombers with eight points and added four rebounds. She scored all eight of her points in the second half, missing on her first eight shots before nailing a 3-pointer in the third quarter.

She continues to build strength in the knee and made some progress Saturday despite hitting just 2 of 13 shots.

“Those shots will start falling for her,” Radtke said of his senior forward. “She’s got the confidence to shoot them, and it’s going to take some time. When they do, they’ll start coming in bunches and we’re going to be proud and happy and excited.”

Judson, which travels to Hebron on Thursday and Portage on Saturday, was 8 of 17 from 3-point range.

The Portage game will test the Jays, who won by 24 points (58-34) in last year’s meeting with the Indians. Portage is off to a 2-0 start and picked up a double-digit win (71-52) over Oregon-Davis on Saturday.

Rensselaer plays at Hanover Central (1-0) on Tuesday and will have its home opener on Saturday against Knox (2-0).

The Bombers could see the Jays again later this winter when the sectional pairings are announced. Radtke is hoping his team will be 100 percent healthy by the tournament.

“We’re not at full strength right now,” he said. “Credit to the girls who are on this bench who are fighting through those situations. We’re working through the growing pains right now … the gut-check times, the challenges that I put out there to them and they’re going to learn to react to those things.”

Partly cloudy this morning, then becoming cloudy during the afternoon. High around 35F. Winds S at 10 to 15 mph.

Snow showers. Some mixed winter precipitation possible. Temps nearly steady in the low to mid 30s. Winds SSE at 10 to 15 mph. Chance of snow 50%. Snowfall around one inch.