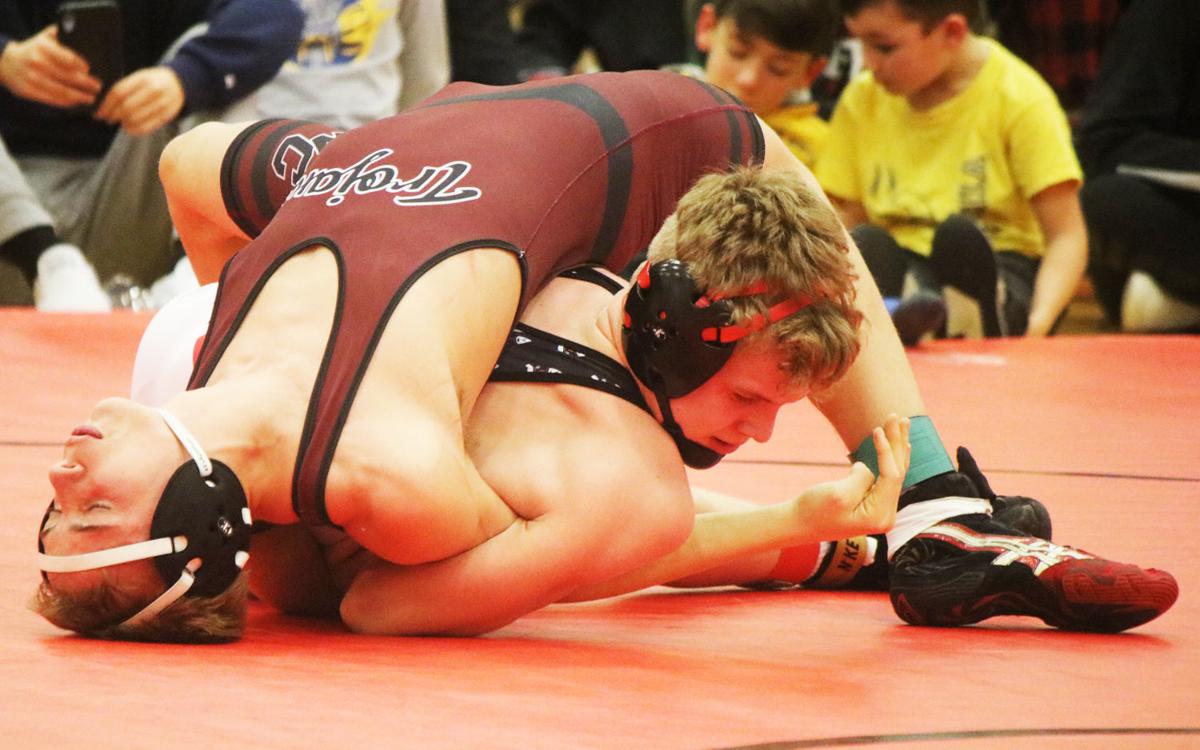 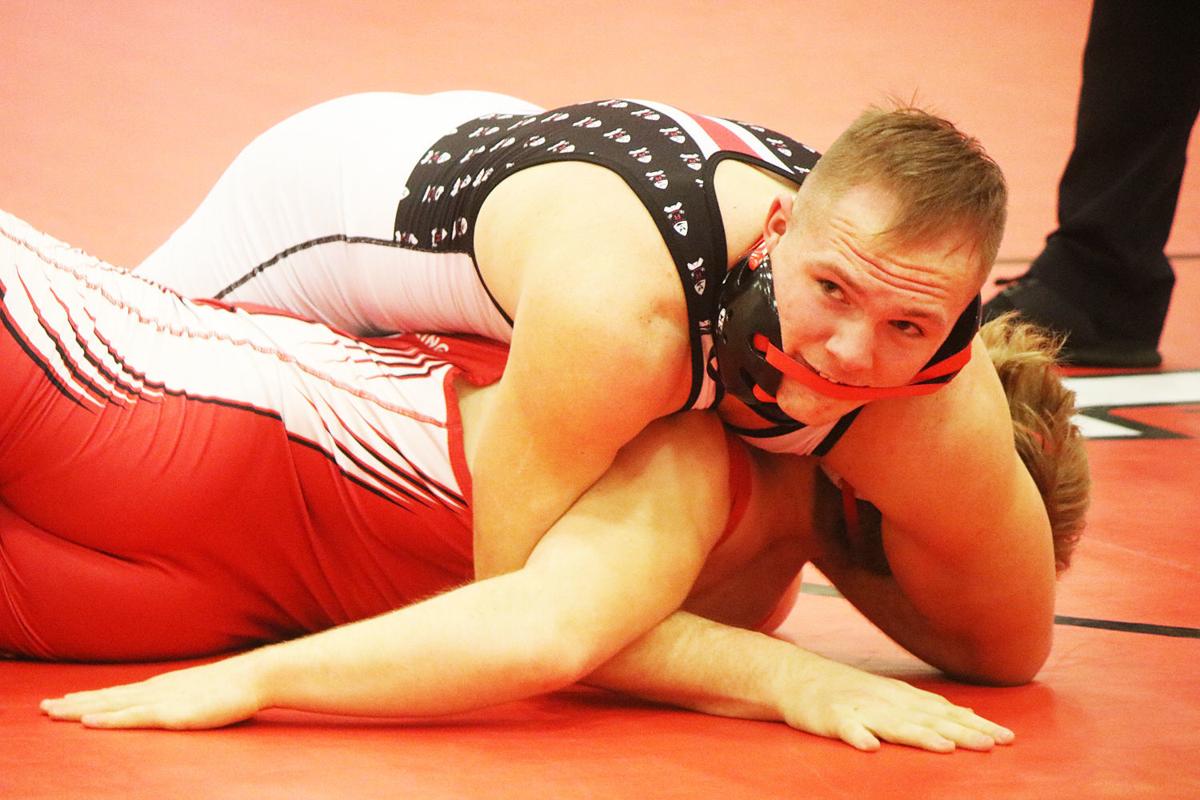 RCHS senior Pierce Taylor put Twin Lakes’ Zach Keesling on his back early in the 195-pound division final. Keesling would fight out of Taylor’s grasp later before Taylor finally stuck his opponent in the second period.

RCHS senior Pierce Taylor put Twin Lakes’ Zach Keesling on his back early in the 195-pound division final. Keesling would fight out of Taylor’s grasp later before Taylor finally stuck his opponent in the second period.

Webb pinned all three of his foes on Saturday, including Tristen Sizemore (21-11) in the 126 final in 3 minutes, 44 seconds.

Webb, whose brother Ryne was a three-time sectional champion, said he also pinned Sizemore in their first meeting in December.

“I was just trying to be aggressive, trying to hit my shots. Try to put him in danger,” Webb said.

The Bomber sophomore needed nearly two periods to get Sizemore on his back this time.

Carter won by a major decision at 145, beating Logan Smith of Pioneer by a 14-6 final. Carter opened the tournament with pins of Jacob Lewellen of Benton Central and Reed Richards of Twin Lakes.

Carter had never faced Smith, who was taller and leaner than the Bomber junior.

“I definitely have a lot of respect for him,” Carter said. “A lot of people don’t have the energy to go six minutes. We were both gassed. It was a lot of work.”

For the first time in his career, Carter came into the tournament as the No. 1 seed in his division.

“I try not to pay too much attention to seeding because last year I had a lot of upsets. I just wanted to show up and do what i do,” he said.

“i was just going in with everything I had.”

Coach Hunter Hickman expected both Webb and Carter to put themselves at the top of the podium Saturday.

“Lakin, we thought he’d have that kind of year this year,” he said. “I’d say Kyle is our most improved kid. Two years ago, he had a really tough time getting on the mat. Last year, he did some good things and improved a lot, and this year, he’s just kind of taken off.

“I think his first match of the year at East Chicago, he wrestled horrible. I think he’d be the first to tell you that. But then he started to wrestle with more confidence. He’s a better wrestler now than he was two months ago. I know he’s a guy who’s a little bit under the radar, but I don’t think you want to draw him come semistate. He’s got a motor on him.”

Taylor went toe to toe with Keesling for six minutes in their first meeting earlier in the year. He won that match by points.

This time, he put Keesling on his back early before the Twin Lakes wrestler worked himself loose.

“He’s stout, strong, so I knew I had to work technique because I couldn’t out-muscle him. He’s too strong. I knew once I had my underhook in, I knew I was set and could take my shot,” Taylor said.

Taylor did experience a scary moment midway through the match.

“He rolled me over and had me on my back for a little bit. I’m not going to lie. I was a little scared for a second,” he said. “I thought I was going to get stuck. But I worked him off and came out on top today.”

The Bomber senior broke his ankle at the North White Invitational a year ago and just missed a chance at competing at the sectional meet after weeks of rehab. He was relatively injury free this season.

“Pierce is like a freshman,” Hickman said. “He’s a senior, but he got hurt early last year and this is really his first full year of wrestling. He’s a strong kid, works hard and he’s a good kid. We’re happy to have him.”

The fourth champion — senior Eli Hickman — continued his assault on the Bomber record books, winning his fourth title in his fourth different weight class. He tied Bomber Hall of Famer Mike Moon as the only wrestlers at RCHS to win four titles.

The school’s all-time wins leader with 161, Hickman improved to 36-1 with three wins on Saturday, including a technical fall win over Frontier’s Denny Wendling (24-2) in the 138 pound final. He scored 20 points to five for Wendling, who got many of his points after Hickman let him up only to put him back down on the mat.

The younger Hickman never shies away from hard work, according to his brother.

“He works hard, and he’s always been like that,” Hunter said. “He’s a go, go, go kid and I think whether it’s baseball, football or wrestling, which he does, he tries to work hard at those things. He’ll probably go hit tomorrow in the cage or something. i’m excited to see what the next three weeks looks like.”

The top four wrestlers in each weight class advance to the regional round.

Stanley suffered a tough loss in the 106-pound final. Tied at 2-2 heading into sudden death overtime, Stanley appeared to have flipped opponent Mikkel Cunningham, but released the North Newton sophomore to do so and Cunningham was awarded with a takedown.

“We had one or two guys who could have gotten through,” coach Hickman said. “It just wasn’t their day, I suppose. We had a match at 120 with Micah, up 8-2 in the semis and got pinned, so that’s a tough one to swallow.”

The Bombers enjoyed their most successful season record-wise. With Saturday’s win, the Bombers became just the second team to three-peat as sectional champions, joining the 1996, ’97 and ’98 squads.

“We’re good this year,” said Taylor, one of six seniors on the team. “We set a school record for wins. It feels good to be part of this team. It’s fun. We have fun practices and it carries over to Saturdays like this.”

Meanwhile, Hickman said he and his staff as well as the wrestlers turned goals into expectations for a great season.

“Two years ago, coach (James) Oliver and myself and coach (Matt) Anderson, to win a sectional was our goal,” he said. “In the back of my mind, I thought we were a year or two early. Last year was a goal again and this year, we kind of changed our narrative. It was an expectation. Go and win the sectional, let’s get as many kids to the regional as possible and put ourselves in a good situation at semistate. I think we’ve done that.”

Wagner will be joined at Logansport by teammates Cunningham, Dylan Olive (third at 152), Elijah Duranleau (second at 160), and Matt Barry (second at heavyweight).

South Newton’s regional qualifiers include Blake Whaley at 120 pounds (second), Kane Sell at 126 (fourth) and Dane Smith at 170 (second). Tri-County senior Luke Ulrich was fourth at 145 to qualify and West Central will take four wrestlers to Logansport, including Sizemore, Nuest, Zion Rodriguez at 138 (fourth) and Griffin McIlvain at 220 (second).