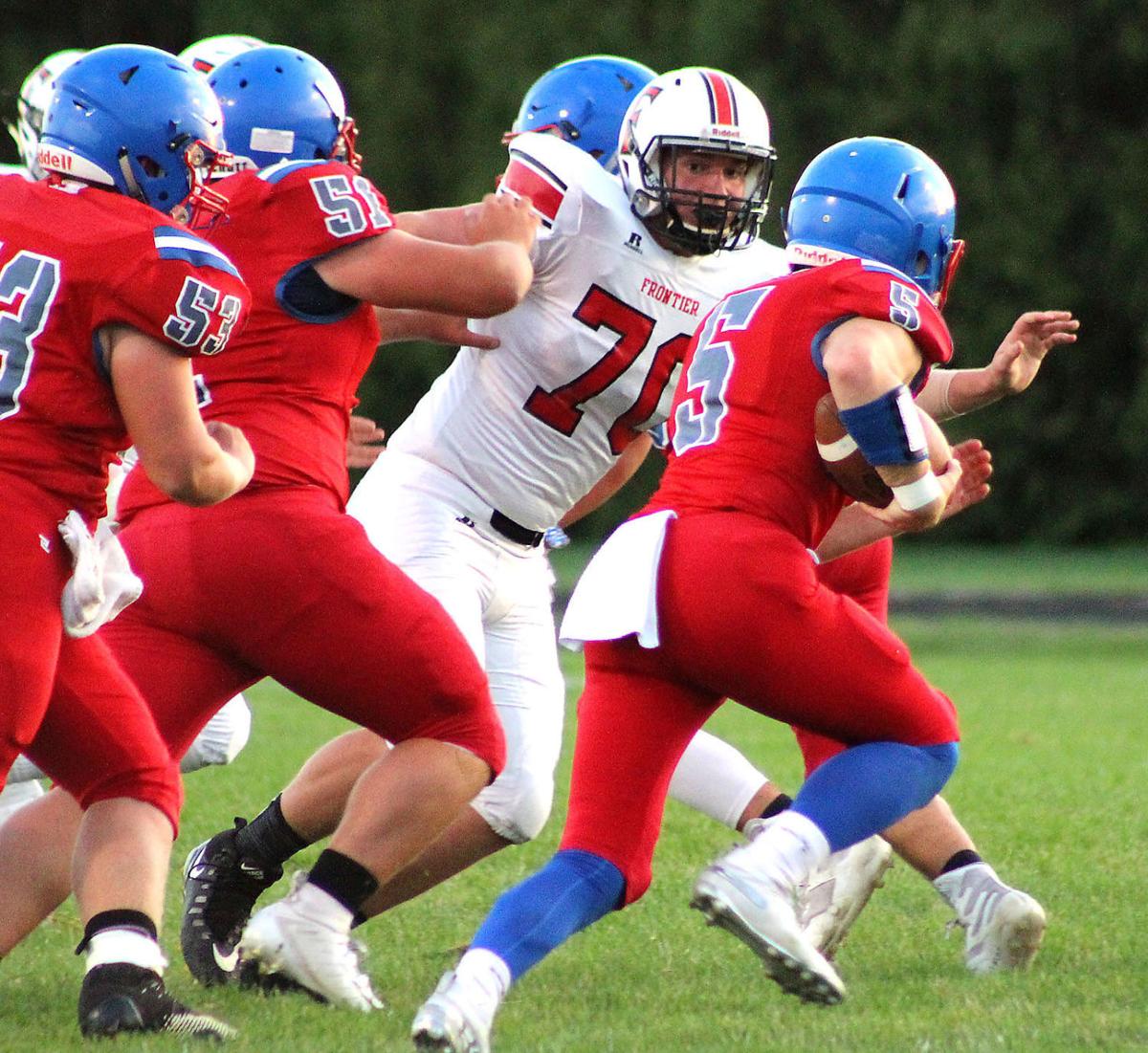 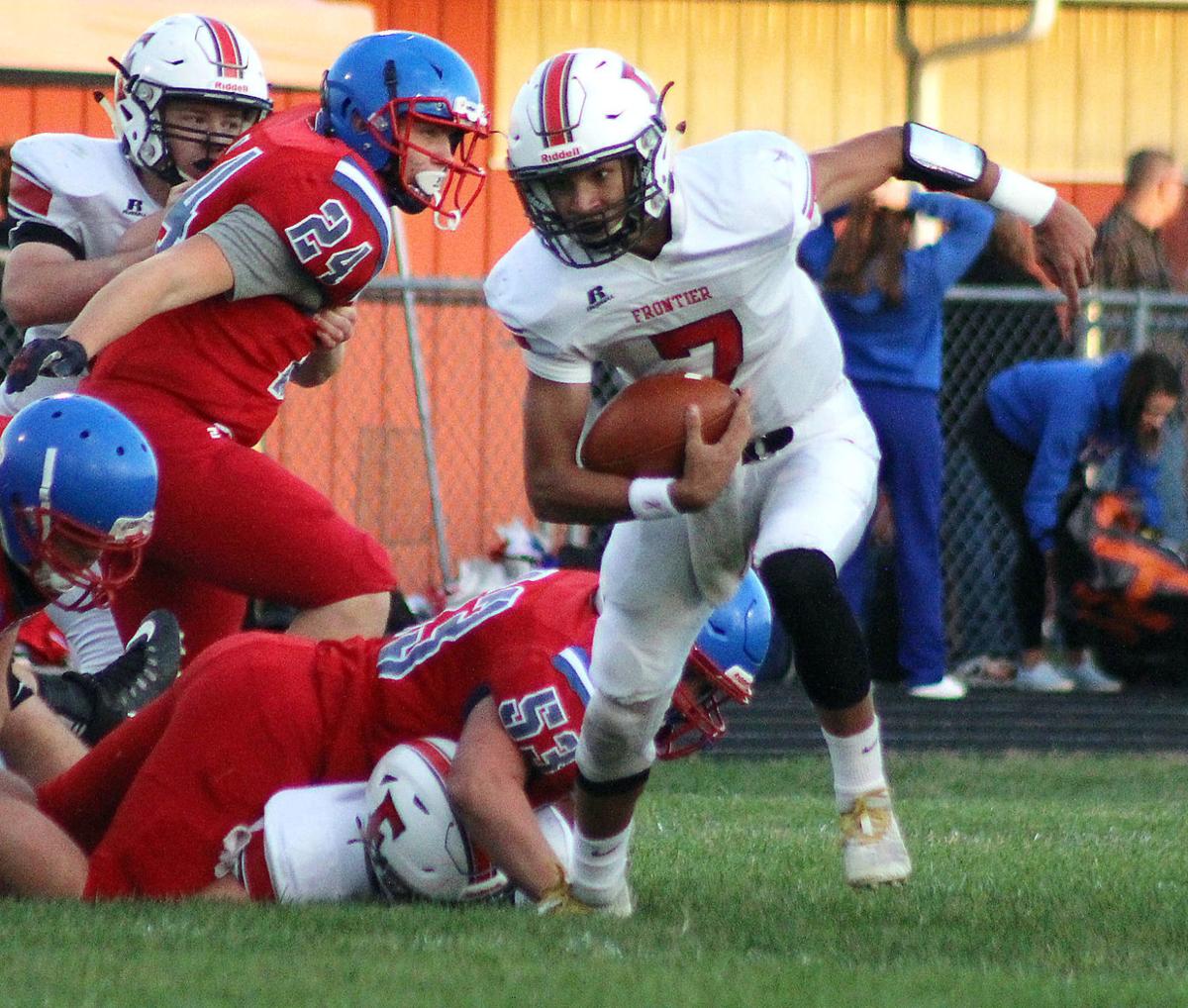 Frontier’s Brooks Sailors looks for room to run during a Midwest Conference contest against Tri-County on Friday in Wolcott.

Frontier’s Brooks Sailors looks for room to run during a Midwest Conference contest against Tri-County on Friday in Wolcott.

And a couple tricks also help.

Frontier ended a two-game skid with a 32-12 victory against Midwest Conference and White County foe Tri-County, utilizing a relatively strong passing performance to pick up two scores and bolster the run game.

The night’s highlight seemingly came on the first half’s final play. Holding a 20-6 lead at the time, but driving to answer a Cavaliers score, Frontier (5-2, 3-1 Midwest) found itself having to call a timeout with 1.6 seconds left when officials deemed Max Copas’ 18-yard run ended inbounds because his knee hit the ground before he walked out of bounds.

The next play was a pitch out to Caleb Atkinson. The senior rolled to his left, and … heaved a pass into the heavens.

Known for his strength, but not necessarily in his arm, Atkinson launched the ball toward the left hash mark downfield. At the end of the play, classmate Max Copas rose up in a crowd and tipped the ball slightly forward, then caught it around the 2-yard line and bulled into the end zone for a touchdown with zeros on the clock.

Both sidelines erupted — the visitors’ in a mix of joy and shock, and the hosts’ in immediate agony. Frontier led 26-6 at halftime.

“That’s one of those Hail Mary end of the half, you toss it up and see what happens,” Frontier head coach Troy Burgess said. “Give Caleb a lot of credit — he stood in there and took a shot at the end, and Max went up and made a play.”

It was the longest pass play the Falcons had — and the second-longest was also a score.

On third-and-13 from the Cavaliers’ 30-yard line, quarterback Brooks Sailors lofted one up for Cole Nantkes, who caught the ball on the fly while streaking into the end zone.

It gave Frontier a 6-0 lead three minutes into the game, and helped set the tone for a weapon the Falcons used when necessary. Sailors was 6 for 8 for 81 yards; he and Atkinson combined for 111 pass yards.

Frontier ran 38 times for 272 yards, but was also stymied at times by penalties. Sailors passed on second down twice and third down once, and all three of those drives were beset by penalties.

“We’re doing things well, we’re just making mental mistakes at times,” Burgess said. “We’re not built for second and 15 and third and 12 — we’re a run football team, and when we have silly penalties and do silly things … it puts us in a tough position.”

Tri-County head coach Mark Gretencord, meanwhile, was relatively happy with his team’s effort after it trailed 20-0 midway through the second quarter. The Cavaliers (1-6, 1-3) accumulated 181 yards, with much of it coming in the second half of play.

“Minus their last-second touchdown (in the first half), and that first interception when we came out — take away those two things, which obviously is a lot — we played a heck of a lot better in the last five minutes of the first half and second half overall,” he said, “That’s something we’re going to hang our hats on and try to build upon that for the remaining couple games we have.”

Kale Lawson was 7 for 13 for 58 yards and an interception, and also ran for 40 yards and one touchdown for the home team. Logan Schneidt added 93 yards and a score.

Atkinson added 124 yards rushing and a score to his offensive totals, while Treven Girard ran for 76 and a touchdown. Copas also ran for a touchdown.

“We didn’t play our best, but we still did the things we needed to do and got a win,” Burgess said. “We beat a county rival, (won) a conference game — it’s a good win for us.