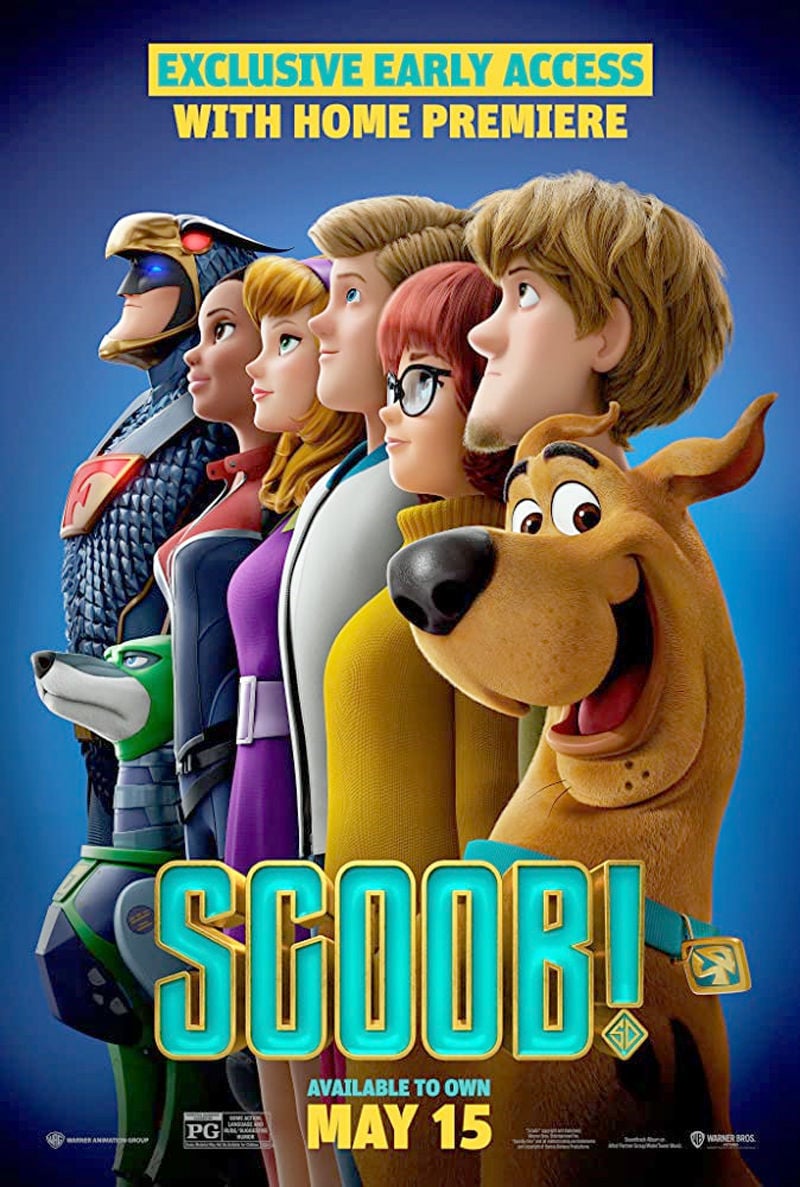 “Scoob!” is available On Demand through streaming services and likely through your local cable provider. The film is rated PG for some action, language and rude/suggestive humor. Its running time is 94 minutes.

It has been over a month since “Trolls World Tour” took the On Demand world by storm, offering families the chance to catch a shiny new movie while stuck in quarantine.

That film took in an estimated $100 million in revenue in its first two weeks — success that “Scoob!” is hoping to repeat with its own On Demand release.

There’s really no reason why it shouldn’t. Like “Trolls World Tour,” the film is a colorful animated adventure based on a well-known property playing to an audience that doesn’t have a lot of first-run options.

The only obstacle I can see to the film achieving wild success is that it isn’t very good.

Shaggy’s first friend is soon followed by his second, third, and fourth, in the form of jock Fred (Pierce Gagnon), sweet Daphne (Mckenna Grace), and smart Velma (Ariana Greenblatt). The quintet discover that they have a knack for exposing criminals posing as monsters, and they pursue this hobby together into adulthood, where they want to make financially-secure careers of their operation.

The problem is that while Fred (Zac Efron), Daphne (Amanda Seyfried), and Velma (Gina Rodriguez) are all perfectly competent detectives, Shaggy (Will Forte) and Scooby are now boneheaded slackers who are useless at best and liabilities at worst.

Gone is the charming, relatable Shaggy from the beginning, and in his place is the undriven stereotype that fans supposedly love.

There’s then a mess of a plot where Shaggy and Scooby get attacked by robots working for Hanna-Barbera mainstay villain Dick Dastardly (Jason Isaacs), who needs Scooby-Doo to open the portal to a treasure left behind by Alexander the Great.

Sound of 'anvil chorus' is alive and well

Traffic lessons we learned from COVID-19

BOB AT THE MOVIES: 'Neighborhood' doesn't give Rogers attention he deserves

They get abducted by new Blue Falcon Brian (Mark Wahlberg), who is taking over the role from his retired father and doing a lousy job of it, making his assistants, human Dee Dee (Kiersey Clemons) and robotic dog Dynomutt (Ken Jeong) do all the work while he hogs the credit.

Meanwhile the rest of the team goes on a road trip to rescue Shaggy and Scoob, who they think have been kidnapped by evildoers, even though they’re fine on Blue Falcon’s ship.

Also, the movie teases a falling out between Shaggy and Scooby-Doo because Blue Falcon wants Scoob to become a superhero and Shaggy wants him to remain a shiftless layabout like him.

The big problem with the movie, aside from adult Shaggy being unlikeable and the jokes being generally unfunny (for example, Shaggy drags out a “the call is from adventure!” bit way too long), is that nobody asked for a Blue Falcon movie. The five core characters and a villain du jour are plenty; we don’t need the tired story line about the blowhard having to learn humility.

Though I will say that Dastardly is welcome as the villain, with an army of cute robots (one particularly adorable one is stuck with a dustbuster for a head) filling in nicely as henchmen while the adults in the audience patiently await the inevitable return of Muttley.

Another Hanna-Barbera cameo voiced by Tracy Morgan I’ll say is a draw.

It’s frustrating how much early potential “Scoob!” wastes. I was really enjoying Welker’s more conversational take on the character’s cadences, as opposed to the usual one-or-two-word contributions. But no, the movie has to have its characters fall into their usual tropes, and be so cluttered in action and easily-predictable “plot twists” that by the end it’s barely recognizable as “Scooby-Doo” anymore.

Speaking of which, did we really need the funky abbreviated title when “Scooby-Doo” sells just fine?

There’s no reason to see this movie other than that it’s the only new game in town.

Variable clouds with thunderstorms, especially during the afternoon hours. High 79F. Winds SSW at 10 to 15 mph. Chance of rain 50%.