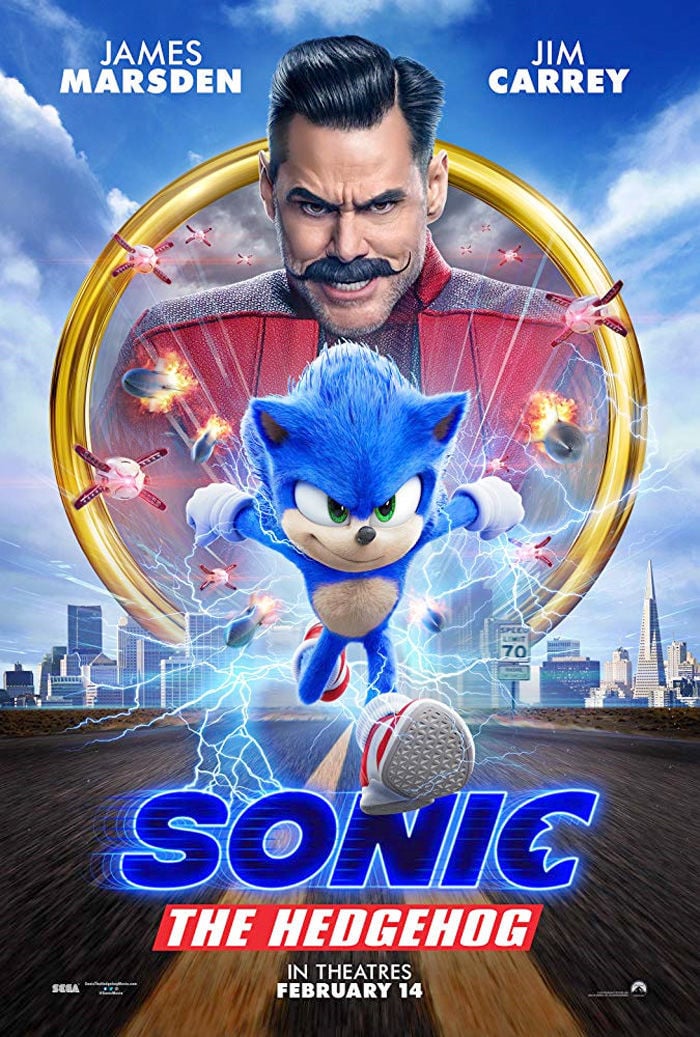 “Sonic the Hedgehog” is rated PG for action, some violence, rude humor and brief mild language. Its running time is 99 minutes.

The film “Sonic the Hedgehog” had originally been pulled from a November release after horrible reactions to its first trailer the previous April.

Then came the second trailer. I liked him better when he was worse.

There was no shortage of complaints about the first trailer, but most centered around the design of the title character, and the uncanny valley effect attributed to his “realistic” eyes, teeth and limbs. The film was pulled so the character could be given a complete redesign.

The version I saw in the trailer last November, as well as in the feature this past weekend, makes Sonic’s features more exaggerated and cartoon-like, which is what people want in a cartoon. It’s a good decision that makes the film’s appearance much more palatable.

And to me, it completely ruins the appeal of the film.

That first trailer gave me some of the heartiest laughs I had in all of 2019, cinematic or otherwise. To be clear, those laughs had absolutely nothing to do with the trailer’s jokes or anything that was supposed to be funny.

No, I was taking joy in the monumental badness of the film, including the character design, yes, but also Jim Carrey coming off as miserable for having to give a throwback performance, the inappropriate choice of “Gangsta’s Paradise” as a theme song, and of course the utter lameness of every single gag.

Correcting the design and removing the song are undeniably relative improvements, but it still leaves the film with an unfunny script and a lousy Carrey performance.

This is a bad movie that couldn’t even retain its special flavor of bad.

Could this really be the messenger's fault?

The time for timidity is over

Sonic the Hedgehog is best known as the speedy hero of a video game that I could never play because I could never figure out how to get the character to curl up into a ball and roll. The film sees Sonic (voiced by Ben Schwartz, the sole animated character in an otherwise live-action movie) exiled from his home planet to Earth, which he likes, even though he has to live in secret. If he’s caught, he can only escape by fleeing to a mushroom planet that he hates (perhaps a dig at the rival “Super Mario” franchise?).

One night while contemplating his loneliness, he causes a disaster that attracts the attention of the U.S. government, who employ the evil Dr. Robotnik (Carrey) to track him down. Sonic is about to use his magic rings to escape to the mushroom planet, but local police officer Tom (James Marsden) causes him to unwittingly transport the rings to San Francisco.

Tom and Sonic have to travel from Washington to San Francisco to retrieve the rings, all while evading Robotnik, who’s evil in a pretty non-specific way.

Seriously, I have no idea if his goal is to kill or capture Sonic, or what he’d do with him if he captured him. We just know he’s the bad guy because he’s doing leftover Riddler schtick from 1995.

This movie is such a bland drag. The road trip aspect is completely forced as the movie has to keep coming up with reasons why Sonic can’t just run to San Francisco, from tranquilizers to injuries to not knowing the way (just look at a map as quickly as you do everything else!).

The action is rarely engaging because Sonic is naturally so much more powerful than Robotnik. The verbal humor usually lands with a thud, save for one notable line from Robotnik about being an orphan, and the visual humor is largely ripped off from the Quicksilver sequences from the “X-Men” movies.

And yet, the animation is pretty good, Schwartz gives life to the character, and there’s an adorable sequence with a turtle that I rather liked.

I can’t give “Sonic the Hedgehog” the trashing I was prepared to give it last April, just an unmemorable, unenjoyable, unsatisfying trashing.

Thunderstorms, some strong this evening followed by occasional showers overnight. Damaging winds, large hail and possibly a tornado with some storms. Low 46F. Winds SSW at 15 to 25 mph. Chance of rain 90%.

Thunderstorms, some strong this evening followed by occasional showers overnight. Damaging winds, large hail and possibly a tornado with some storms. Low 46F. Winds SSW at 15 to 25 mph. Chance of rain 90%.

Cloudy with gusty winds. High near 50F. Winds WSW at 25 to 35 mph. Winds could occasionally gust over 50 mph.