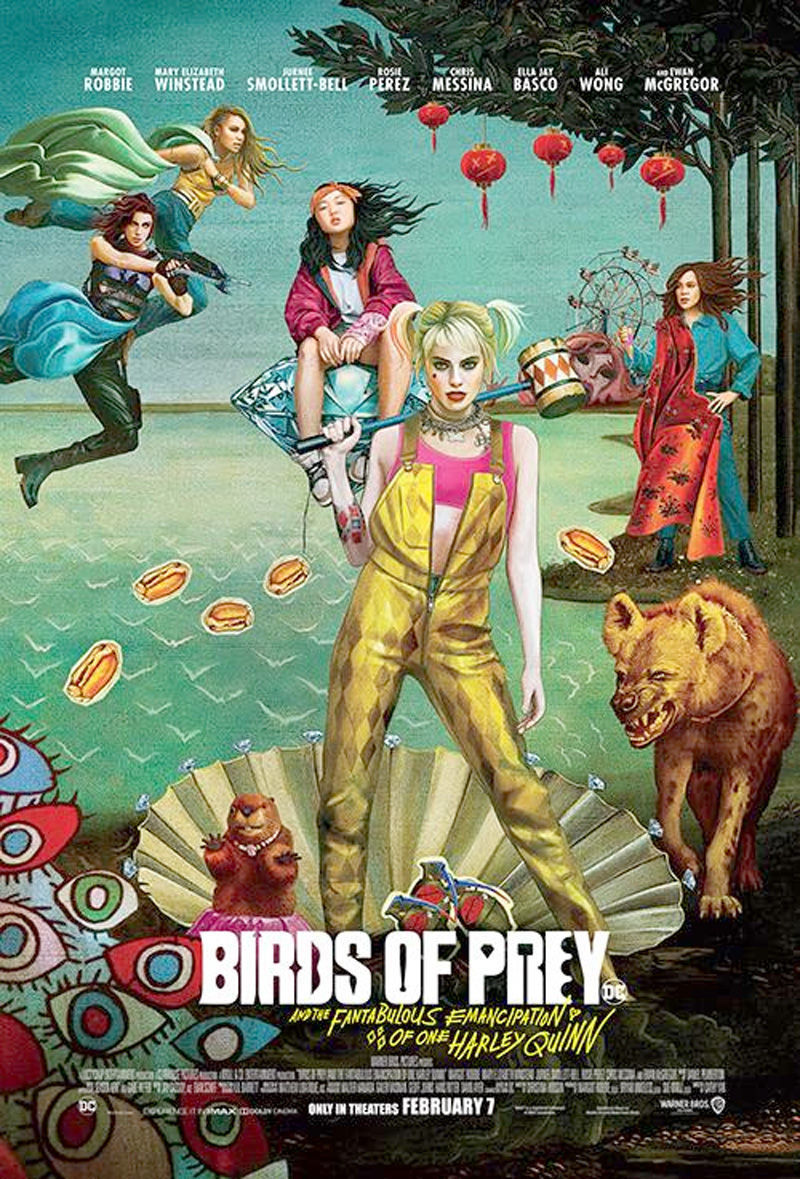 “Birds of Prey…” is rated R for strong violence and language throughout, and some sexual and drug material. Its running time is 109 minutes.

I’m writing this review less than three hours removed from Joaquin Phoenix winning an Oscar for “Joker.” It is the second time an actor has won for playing the Clown Prince of Crime, after Heath Ledger’s posthumous win for 2008’s “The Dark Knight.”

Other actors known for iconic takes on The Joker include Jack Nicholson in the 1980s, Cesar Romero in the 1960s, and my personal favorite, Mark Hamill, in the 1990s animated series. About the only actor whose portrayal of the character was widely panned was Jared Leto in 2016’s “Suicide Squad.”

“Birds of Prey” takes place in the Leto continuity.

To be fair, Leto’s lousy Joker is nowhere to be seen in this movie. Instead, we get to spend a whole movie with one of the high points of “Suicide Squad”: Margot Robbie’s Harley Quinn.

Harley is usually inseparable from The Joker, tethered to him in an unhealthy relationship based on obsession and emotional dependence. But here, the couple is broken up, to the point where Harley burns the bridge with her ex-lover by blowing up their favorite chemical plant.

Her newfound freedom puts her on the bad side of the villainous Roman Sionis (Ewan McGregor), who in the past wouldn’t have harmed Harley because of her connection to The Joker, but now himself feels free … to do all the harming he wants.

Things aren’t going well for Sionis on a number of fronts. Harley broke his driver’s legs, and he’s not 100 percent sure he can trust new driver Black Canary (Jurnee Smollett-Bell). Detective Renee Montoya (Rosie Perez), of the Gotham Police Department, is building a case against him.

MOVIE REVIEW: 'Sonic' storyline never gets up to full speed

Incentives and the 'Hoosier Davos'

On one hand, it’s unlikely that five such disparate women will want to work together; on the other, the film’s title and everything about its advertising indicate a team-up.

The problem with the movie in a nutshell is that it doesn’t have room for complex characters. Montoya is a principled cop, fine. Cain is a street urchin with unloving foster parents, fine (aside from Basko’s stiff acting). But Huntress and Black Canary’s stories seem rushed and I never connected with either character the way I was supposed to, and I very easily could have with more development.

Then there’s Harley herself, and while her backstory is more than fleshed out in an animated opening and references to her background as a psychiatrist, the movie forgets to have her really struggle with the very emancipation that’s right there in the title.

She’s fiercely independent right off the bat, and until Sionis brings it up in the last act, I completely forgot about her previous dependence on The Joker, even though that is — and has always been — a major part of her character.

Other complaints I have about “Birds of Prey” include Sionis’s villainous mannerisms seeming unnatural coming from McGregor (as if the character, not the actor, has studied comic book villains and is making a half-hearted attempt to emulate them) and a climactic action sequence in a funhouse being more at home in the chintzier Joel Schumacher Batman movies.

Positives are mostly limited to the film’s dialogue taking full advantage of the R-rating and the performances by Robbie and Perez. There’s a good Harley Quinn movie somewhere out there, but the DC Universe hasn’t hit it yet.

Early numbers indicate that the film is under-performing at the box office. I hope it does well enough for us to get a sequel, but not so well that there isn’t pressure on the filmmakers to step up their game for the next movie.