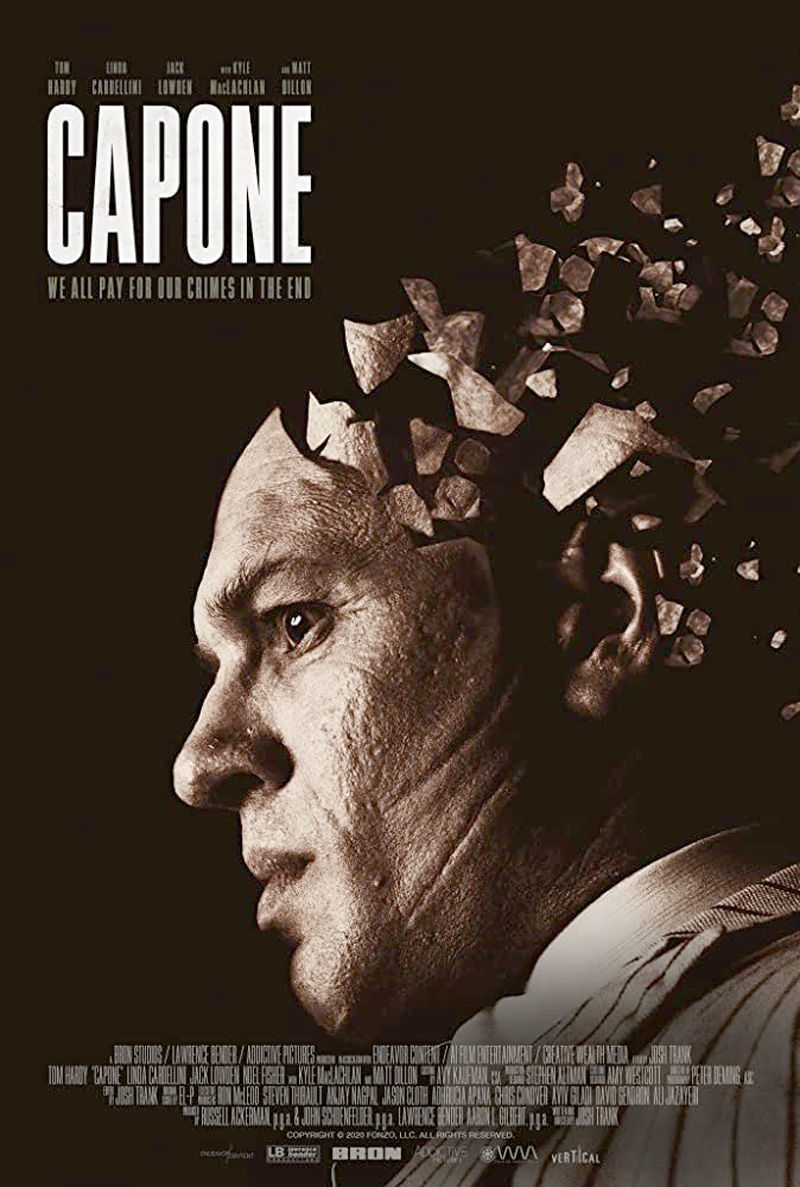 “Capone” is available On Demand through streaming services and likely through your local cable provider. The film is rated R for strong/bloody violence, pervasive language and some sexuality. Its running time is 103 minutes.

Tom Hardy isn’t very convincing as Al Capone in “Capone.” Granted, I’m not an expert on the real Capone, but I seriously doubt that he naturally acted like a terrible Tom Hardy performance or looked like he was wearing unconvincing makeup.

It’s not like this movie was on track to be decent anyway, but the everything about the character at its center makes it downright painful.

The film follows notorious mob boss Alphonse “Al” (though he’s called “Fons” throughout the film by his friends and family) Capone through the last year of his life. The gangster famously went to prison on tax evasion charges, but he’s been released to live in his Florida mansion with his wife Mae (Linda Cardellini, respectable except for a fantasy sequence). He should be happy to be living in luxury surrounded by family, but he’s miserable that he’s losing his grip on his kingdom, not to mention reality.

He confides in his buddy Johnny (Matt Dillon, introduced in a sex scene that is not only gratuitous, but illogical) that he hid $10 million somewhere — money he could use to pay off his debts so his mansion doesn’t have to be sold off piece by piece — but he can’t remember where.

Everybody wants to find this money first, from his family to his doctor (Kyle MacLachlan) to the FBI, but nobody’s finding anything unless Fons can navigate his syphilis-afflicted mind and come up with the location himself.

Capone’s life is riddled with problems that aren’t going to go away. There’s his financial woes and his worsening mental state, there’s also an issue with an illegitimate son, scrutiny from the FBI, dissention (or at least perceived dissention) within his family and staff, an alligator that steals away his fish, and the fact that his body is betraying him in the form of a stroke and incontinence (oh so much incontinence).

Bob's 'Big Boy': A statue for our confused times

BOB AT THE MOVIES: 'You Should Have Left' is uninspired garbage

He also has hallucinations and nightmares, which are little more than an excuse to have something interesting happen in this film. These dreams usually consist of him trying to connect with his estranged son and stumbling onto something unpleasant, including one of the bloodiest scenes in recent memory.

Most of the film, however, is Capone just being Capone, going about his life. And what an unwatchable life he leads. I’ve already touched on his unnatural appearance, but even worse than that is the way he sounds. His voice – much like his face – is noticeably not something that emits from a normal human, at least not one that isn’t voicing a cartoon character.

His health has reduced his speech to little more than grunts and garbles, and even those are obstructed by an ever-present cigar. The doctor at one point tells him he has to give up the cigars to my momentary gratitude, only to suggest that they be replaced with carrots, which make him similarly incomprehensible and add a gross element of food-chomping.

And I get the feeling that Tom Hardy is laughing through all this, pleased in his ability to annoy me so thoroughly.

“Capone” is the worst movie I’ve seen all year. I’ve lost a lot of respect for Tom Hardy, thinking this performance was passable. The same goes for writer-director Josh Trank, though I will say that even this is better than that awful “Fantastic Four” movie that even he hates.

Even with this era’s limited entertainment options, I’m sure you can find something better than this.