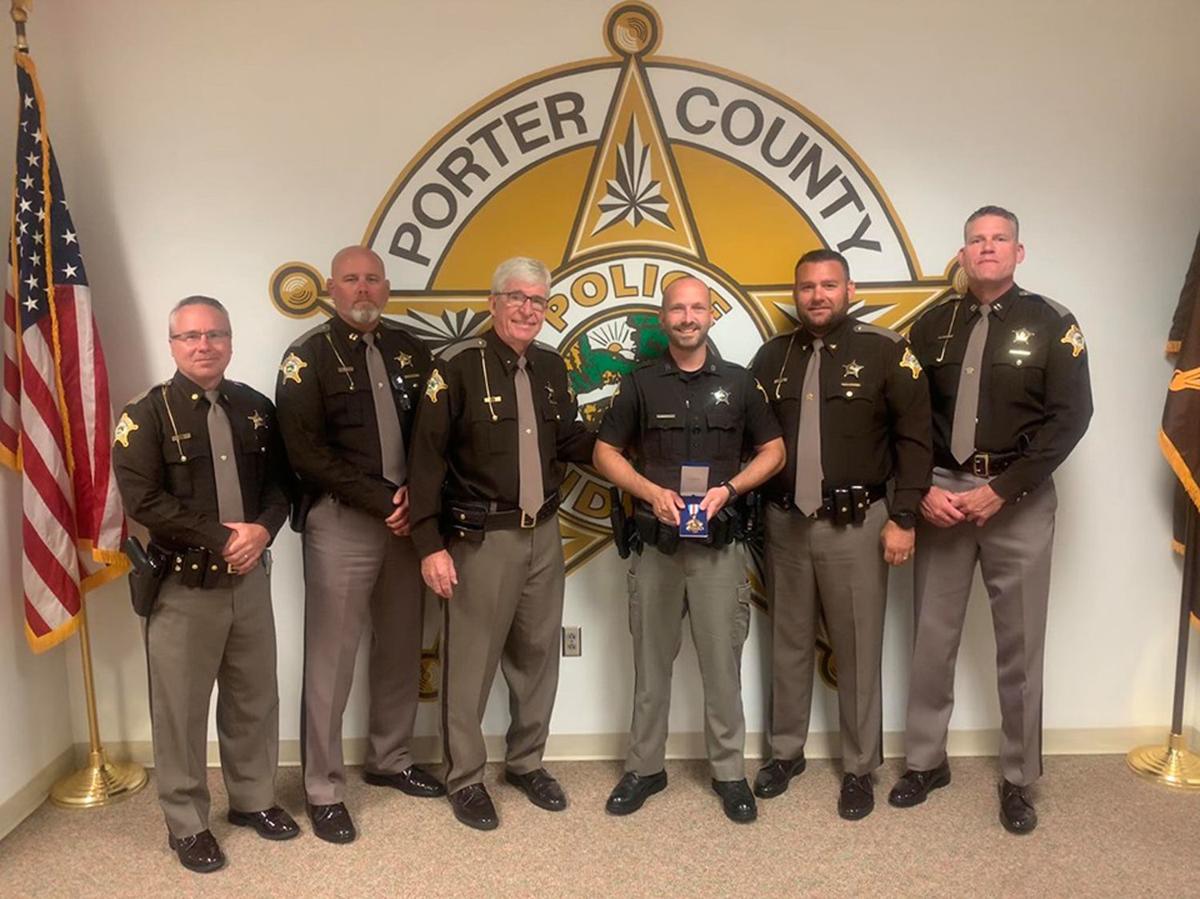 Officer Nathan Graf (center right) holds his Medal of Honor given to him by Porter County Sheriff David Reynolds (center left) with Porter County officers in attendance, including the two officers who were saved from injury or death by Graf’s actions. 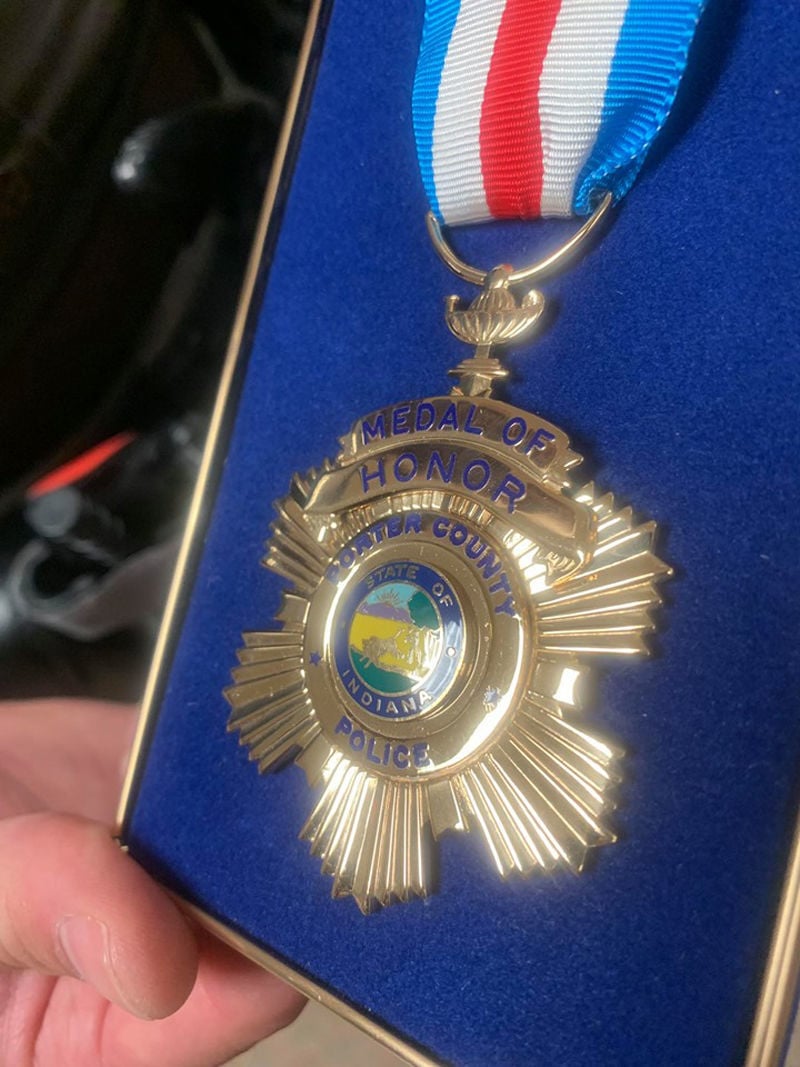 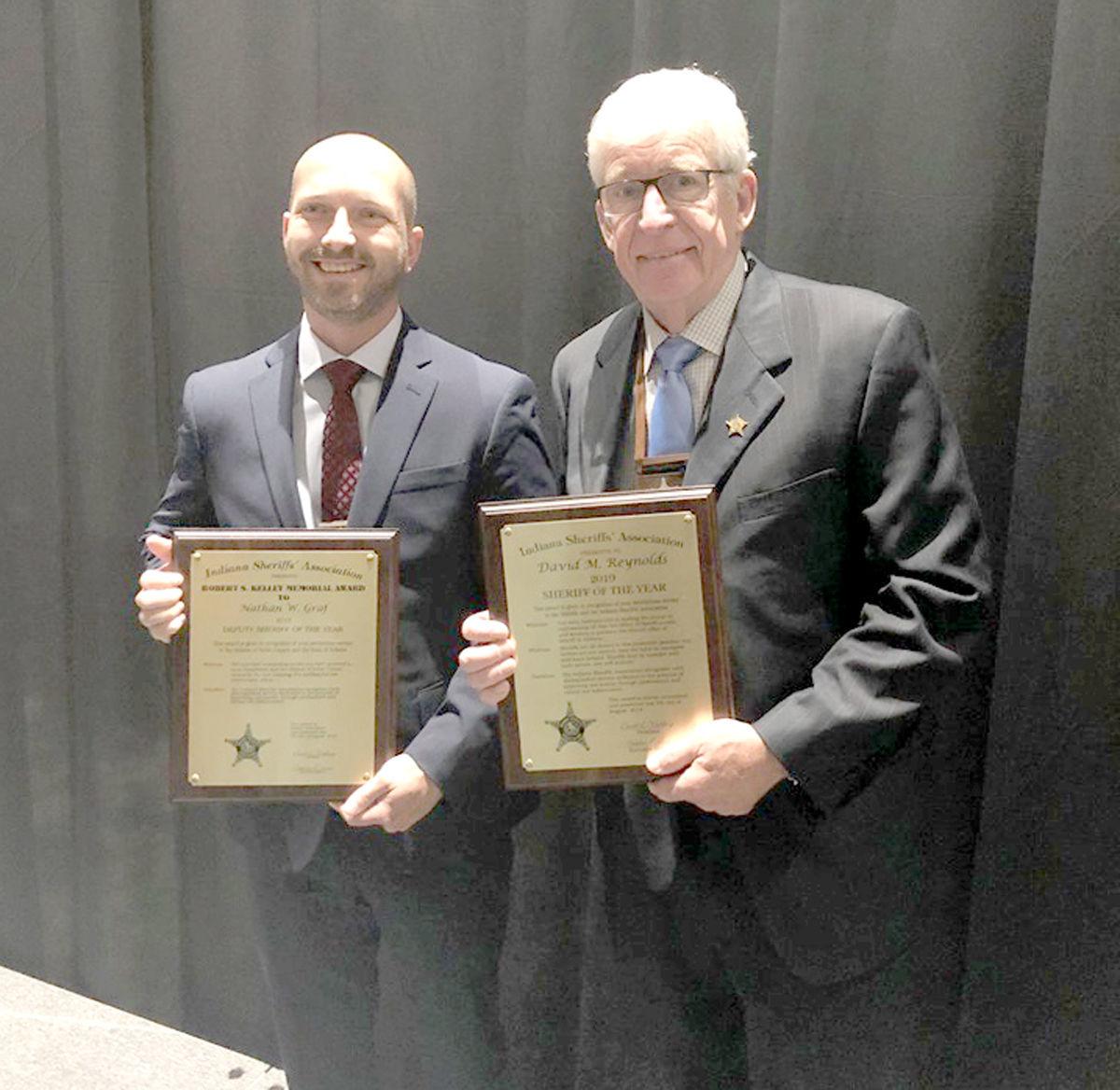 Officer Nathan Graf (center right) holds his Medal of Honor given to him by Porter County Sheriff David Reynolds (center left) with Porter County officers in attendance, including the two officers who were saved from injury or death by Graf’s actions.

VALPARAISO — On Aug. 7, 2019, the Indiana Sheriff’s Association honored Porter County Officer Nathan Graf with the Deputy Sheriff Officer of the Year award after he received the Porter County Sheriff’s Office Medal of Honor in July for his role in saving two officers from a man wielding a box cutter. Graf is a 2005 graduate of Kankakee Valley High School and a former resident of Wheatfield.

On a January evening in South Haven in Porter County, deputies were called to a home at approximately 5:40 p.m. The officers were sent to assist medics with a male who was threatening to slit his wrists. The first officer on scene, Officer Tyler Williams, began a conversation with the man, who had already made deep bleeding wounds to his wrists. Williams attempted to get the man to drop the box cutter he held in his hand.

The man went into his residence and barricaded himself inside.

Graf and another officer arrived shortly after, and they decided to force entry due to the man’s serious wounds. Graf was armed with a taser and he had instructed Williams to cover him with his firearm. As Graf entered the entrance to the kitchen of the home, he used his taser on the man, later identified as 42-year old Kevin Grant Vawter. who again ran from the officers. As Graf was repositioning himself near the kitchen entrance, the man came running at Williams with the box cutter. Chavez was not far behind, and Graf saw the two officers were in “immediate danger” according to a letter written on his behalf to the Indiana Sheriff’s Association.

Graf took his firearm and fired three rounds at the man, all of which hit him. Vawter fell just before he reached Chavez. Graf kicked the box cutter out of the man’s hand, handcuffed him and searched for more weapons. Afterwards, the three officers began life saving measures until EMS personnel could take over. Vawter later died from his wounds.

The letter from Porter County Sheriff Chief Deputy Tim Manteuffel states, “Officer Graf’s flawless transition from his taser to his firearem, his proficiency with the firearm and his calm demeanor throughout, are the reasons that Officer Williams and Lt. Chavez were not harmed. His dedication to this profession and to this agency has always been clear. Officer Graf’s shooting was closed by the Indiana State Police last month.”

As the military honors its members who have distinguished themselves by acts of valor, the sheriff and the department felt Graf should be honored with the Porter County Sheriff’s Office Medal of Honor, only the second time this has been done.

During the same ceremony at the Indiana Sheriff’s Association Conference, Porter County Sheriff David Reynolds was awarded Sheriff of the Year as well.

A statement was released from the department on its Facebook page after the medal was awarded, stating, “Today was a very special day at Porter County Sheriff’s Office. Officer Graf was presented the Medal of Honor for his heroic actions on a call in January of this year. His quick actions most likely saved the lives of two officers when a man ran at them with a box cutter. Congratulations Officer Graf!”

Due to a pending litigation on the shooting, Graf could not be reached for comment on his medal or his action on that day.

Cpl. Ben McFalls, public information officer for the department, said the Sheriff’s Office is very proud of Graf. “He did exactly what you would hope other officers would do in that situation,” he said.

Graf was a student of Jeff Moolenaaar, who teaches law enforcement classes at KV High School. He remembers his former student and said, “I remember Nathan in my criminal justice class as a great student who took his work seriously. He was always respectful and kept a level head in the classroom.

“I am very proud of him for taking the appropriate actions needed to save his fellow officers lives.”

Moolenaar continued, “Deputy Graf responded to a vehicle accident that one of my students was in a couple years back. My student came to school excited about the fact that Deputy Graf had talked to them about when he was at KV and he took my criminal justice class as well.”

Variable clouds with snow showers. High near 30F. Winds SE at 10 to 20 mph. Chance of snow 70%. Snow accumulations less than one inch.