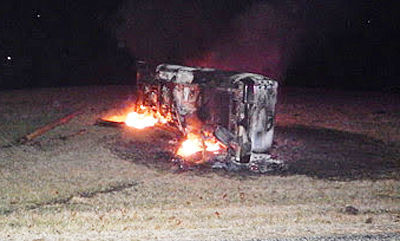 This Silverado pickup caught fire after hitting a utility pole Sunday, trapping the passenger inside.

This Silverado pickup caught fire after hitting a utility pole Sunday, trapping the passenger inside.

NEWTON COUNTY — A Morocco man has died as a result of a single-car crash in Newton County on Sunday night.

Thomas Richardson, 30, of Morocco, was killed when a car he was a passenger in struck a utility pole and caught fire on County Road 400 West near Morocco.

According to the Indiana State Police, a call was sent out at 9 p.m. that a single vehicle had gone off the road in Newton County. Preliminary investigation by the responding officer, trooper Brian Runyon, revealed that a black 2012 Chevrolet Silverado, driven by Andrew Kepchar, 29, of Crown Point, was traveling north on C.R. 400 West near Morocco.

After leaving the road and striking a utility pole, the vehicle rolled onto its passenger side and caught fire. Meanwhile, power lines that were knocked down from the crash hindered first responders trying to access the vehicle.

Richardson was pronounced dead at the scene by the Newton County Coroner’s Office.

Kepchar was taken to Franciscan Hospital of Rensselaer where he consented to a certified test (blood draw) for alcohol consumption. The results of that blood draw are pending testing by the Indiana Department of Toxicology.

Kepchar was arrested and transported to the Newton County Jail. He is tentatively charged with Operating While Intoxicated Causing Death, a Level 5 Felony. The crash remains under investigation by the Indiana State Police Crash Reconstruction Team.