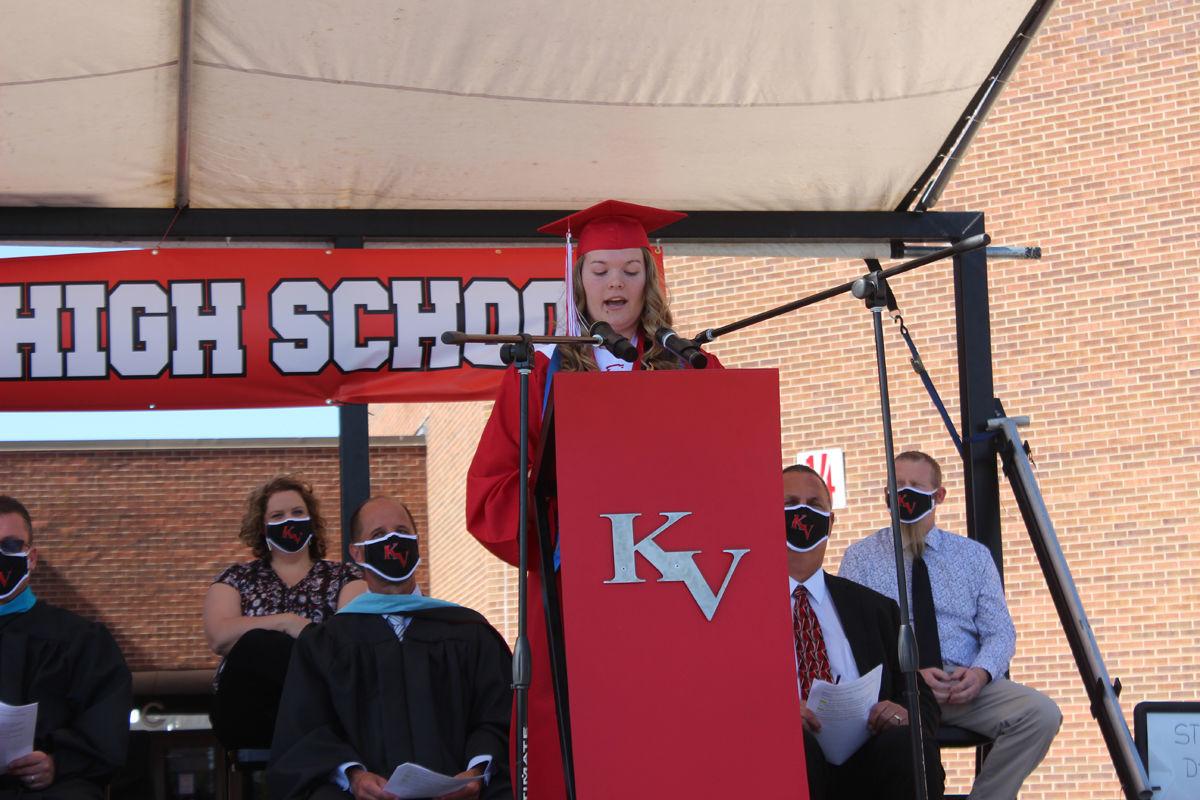 Valedictorian Sara Groen speaks to her classmates who are listening through their vehicles’ FM radio. 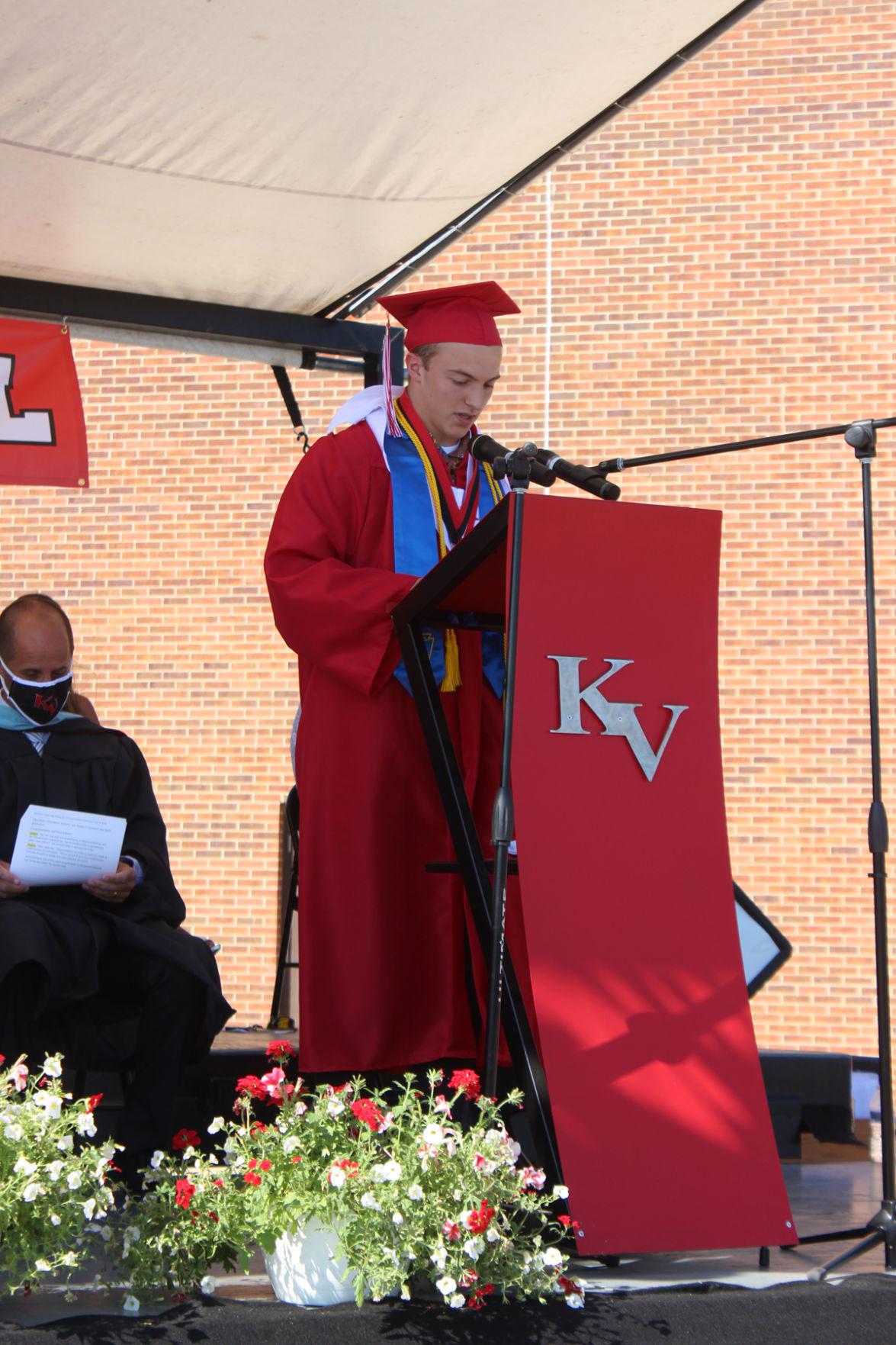 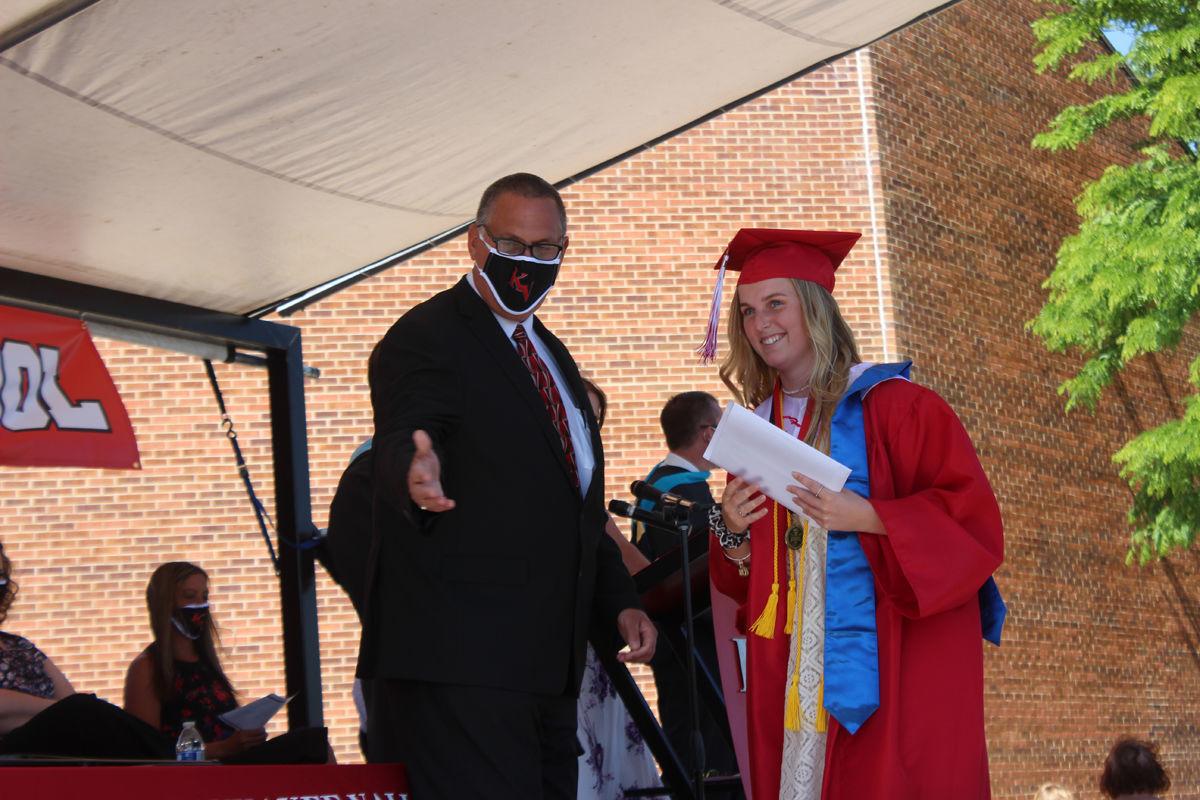 Superintendent Donald Street shows Madey Flick the next step as she walks across the stage at the KV graduation ceremony Saturday afternoon.

Valedictorian Sara Groen speaks to her classmates who are listening through their vehicles’ FM radio.

Superintendent Donald Street shows Madey Flick the next step as she walks across the stage at the KV graduation ceremony Saturday afternoon.

WHEATFIELD — The Kankakee Valley High School Class of 2020 had the first parking lot commencement ceremony at the school.

They were also the first class to end their year without actually being in the classrooms to the very last day.

The national health emergency left the school few options to have a regular ceremony, and with a number of students leaving for bootcamp in the military, the decision was made to keep the original graduation date and time, but to hold it outside with families and seniors parked in the parking lot until it was their turn to drive up the stage set up at the back of the school.

With the sun shining brightly, the stage was set for the graduates to exit their vehicles, walk up onto the stage, receive their diplomas and senior awards, flip their tassels and pose for pictures before heading back to their cars. Valedictorian Sara Groen and salutatorian Elijah Gott were on the stage and able to give their speeches before the sea of decorated vehicles filled with family and friends.

The program was transmitted via FM radio and recorded live for all to see who could not be there. Large vehicles, like buses and limousines were not allowed.

There was no band to play “Pomp and Circumstance.” No choir to sing, and no recessional. Seniors were allowed to decorate their mortarboards, another first for this class, which missed so much due to the pandemic.

Gott said he was happy they got to have a ceremony.

“If we could have finished out our school year, I probably still would not be ready,” he said in his commencement speech. He thanked his fellow classmates entering the military for their “selflessness and bravery.

His comments were welcomed with lots of honking horns and clapping.

Groen said she was looking forward to actually being done. She said the quarantine had been difficult, but she did get more sleep and got “even closer” than they had been since they spent so much time together. She said they even threw her a prom.

“No class will experience the same amount of support from family and friends,” she said.

She lamented the fact that she lost her senior track season, which she felt would have been her best season in her high school career. She said they would never get back March 13, not knowing then that it would be the last day her class would be together.

“Use what you’ve learned from this chapter, “ she advised her classmates. “You never know when it will end.”

Before giving out the diplomas, Superintendent Don Street gave the official proclamation that the Class of 2020 has graduated and after receiving their diplomas, each senior could flip the tassel signifying the end of their high school days.

Many of the families decorated their vehicles to participate in a parade from the high school through DeMotte following the ceremony. Joined by Keener and Wheatfield Fire Departments and local police departments, the graduates were led through the streets to be honored by the community.

Some clouds. Low near 65F. Winds light and variable.