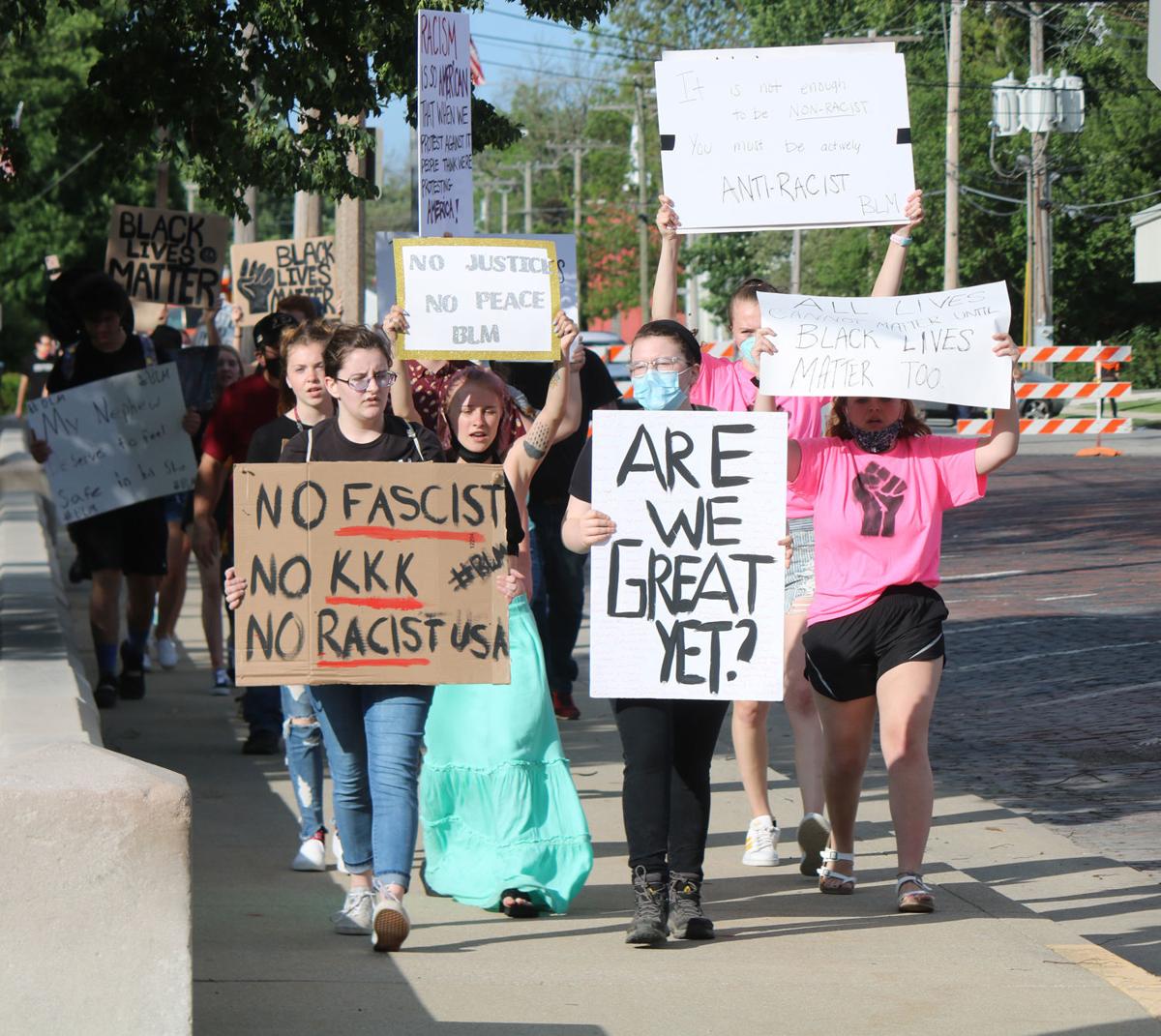 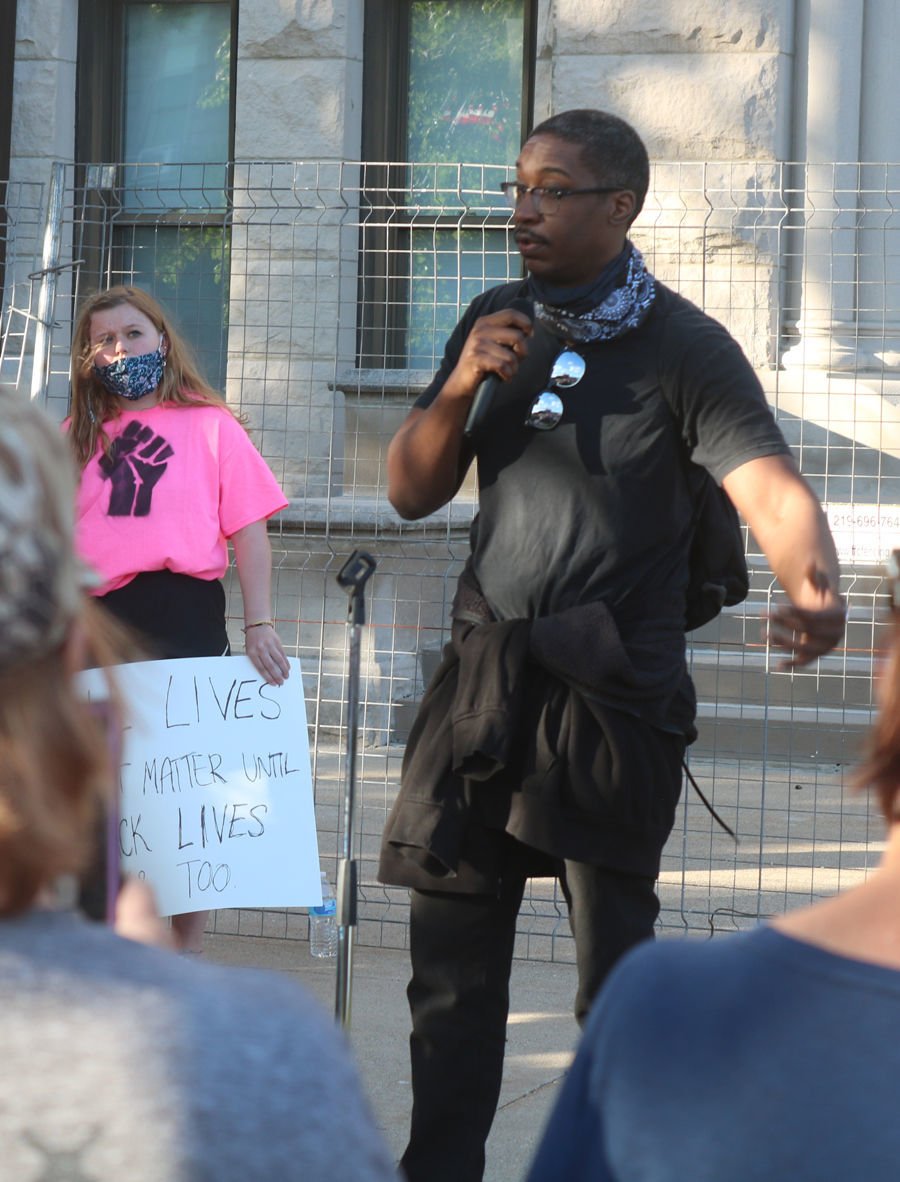 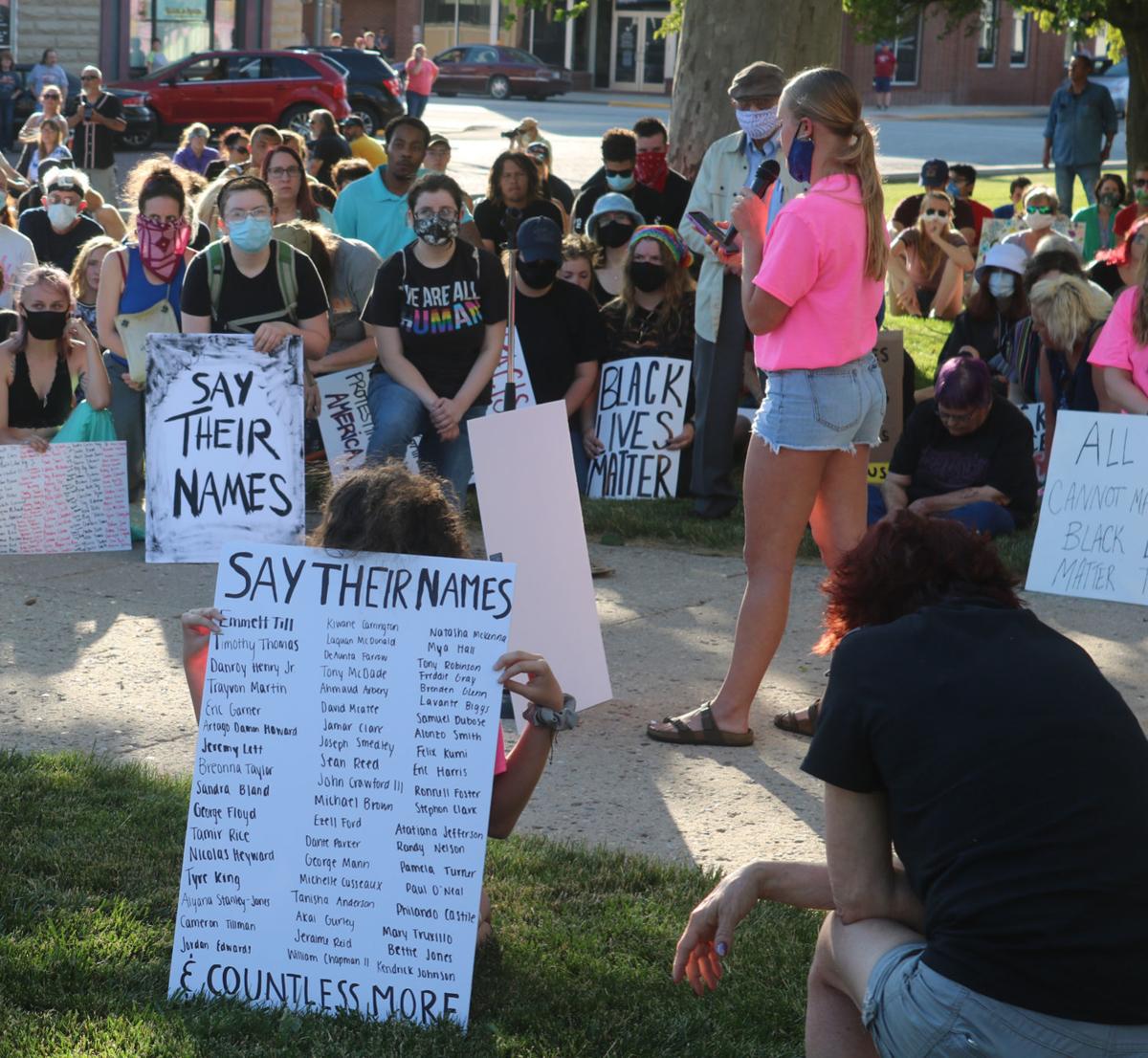 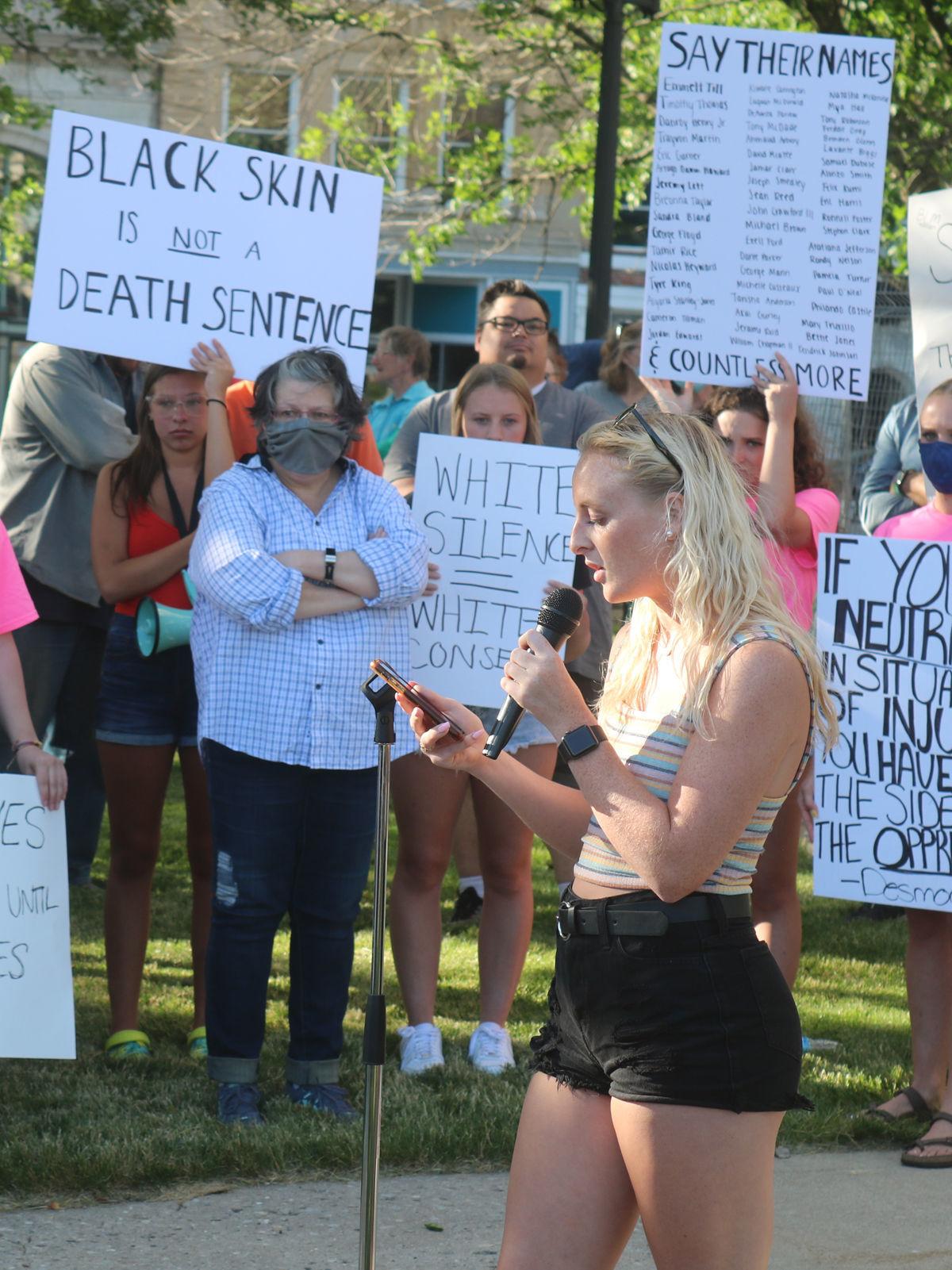 London Griesey, of Monticello, speaks during the June 11 “Rally for Peace” on the Jasper County Courthouse lawn.

London Griesey, of Monticello, speaks during the June 11 “Rally for Peace” on the Jasper County Courthouse lawn.

RENSSELAER — Any tension felt prior to Thursday’s “Rally for Peace” demonstration at the Jasper County Courthouse melted away when people began gathering on the lawn to share in the message, “Black Lives Matter.”

The rally began with several people taking a lap around the courthouse carrying signs that showed support for the BLM movement. A crowd of more than 100 people then settled in as they listened to a handful of speakers talk about the injustices African-Americans face in the U.S.

County officials had barricaded the entrances to the courthouse with portable fencing. There was also a strong police presence, with officers perched on rooftops across from the courthouse and others standing around the perimeter of the courthouse.

A drone could be seen circling the sky above and both of the county’s K9s were on duty. Police were also posted at the city’s only gun shop a few blocks away.

Members of the Invaders motorcycle gang from northwest Indiana were reportedly standing in front of storefronts on Washington Street during the rally.

Among those asked to speak were minorities Patrick Armstrong, Vandaline Baker and Tony Bronson, who talked of being discriminated against in Rensselaer and elsewhere. Pastor Marcia Smith-Wood provided the blessing.

Armstrong, who was born in South Korea, grew up in Rensselaer and graduated from Rensselaer Central. Baker has a daughter who currently attends RCHS and feels her daughter is picked on because she is African-American.

He ended his discussion with “All lives don’t matter until black lives do,” which was the theme throughout the evening.

Bronson, a law enforcement officer, recalled a time when he was walking home from work and a fellow employee called to ask what he was doing. Someone had called to ask if someone had escaped from jail.

“The caller said they saw a man (posing) as a police officer walking the streets,” Bronson said. “They were told I am a law enforcement officer, but they said, ‘That can’t be right.’”

Bronson laughed it off, but it’s something that he’s seen all too often.

Bronson said later that he’s glad to see the dialogue created by rallies like the one in Rensselaer.

“I’m glad that awareness is being spread around,” he said. “There is always something even though you may not be paying attention.

“Everyone looks at us as villainous,” he added. “We’re just trying to live the American dream.”

Others who addressed the crowd included Caron Jacobson, a professor of criminal justice from Detroit; London Griesey, of Monticello; RCHS graduate Aubrey Arihood, who now lives in Texas; and Elizabeth Ruuska, who adopted two children of color.

Jacobson said the systemic racism against blacks in criminal justice needs to stop and pushed for demilitarizing police departments.

At one point, Hannah Hall, one of the event’s organizers, read off a list of names of African-Americans who were killed because of the color of their skin. A moment of silence, which lasted as long as it took for Hall to read all 55 names, was then held.

Black Lives Matter is an international human rights movement that originated within the African-American community. It campaigns against violence and systemic racism towards black people.

Most recently, the death of George Floyd in Minnesota triggered demonstrations and protests against police brutality and police racism throughout the country and the world.

Floyd, 46, died last month when a white police officer knelt on his neck for nearly nine minutes while Floyd was handcuffed and lying face down on the street. In a video recording that has since gone viral around the world, Floyd can he heard begging for his life, telling officers, “I can’t breathe,” but his pleas were ignored.

Rensselaer’s rally was cut short after a group of nearly 10 people along the west side of Van Rensselaer Street began chanting how all lives matter, not just blacks. It was loud enough to disrupt two people who were asked to speak at the end of the event.

By then, the rally had gone just over an hour and demonstrators left the courthouse lawn without incident.

Hillary Hall, one of a group of college-aged organizers of the event, said she was pleased with the tone of the rally, “except the people being rude to us and the fact we had to cut it short. At least we hope it starts conversations at home.”