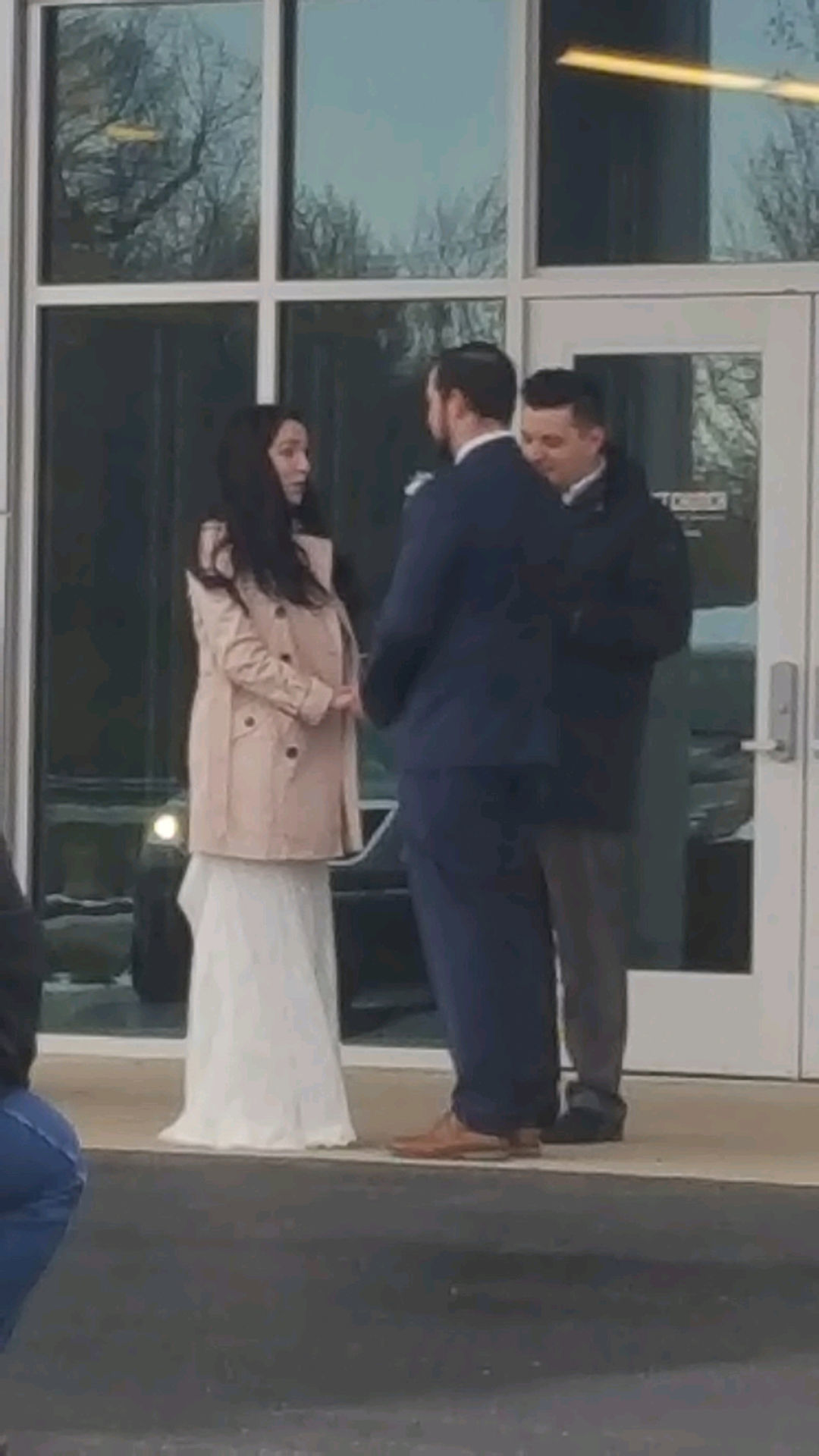 Patti and Zivko exchange vows in front of the doors to First Church in Wheatfield. Youth Pastor Zachary Fraley performed the ceremony. 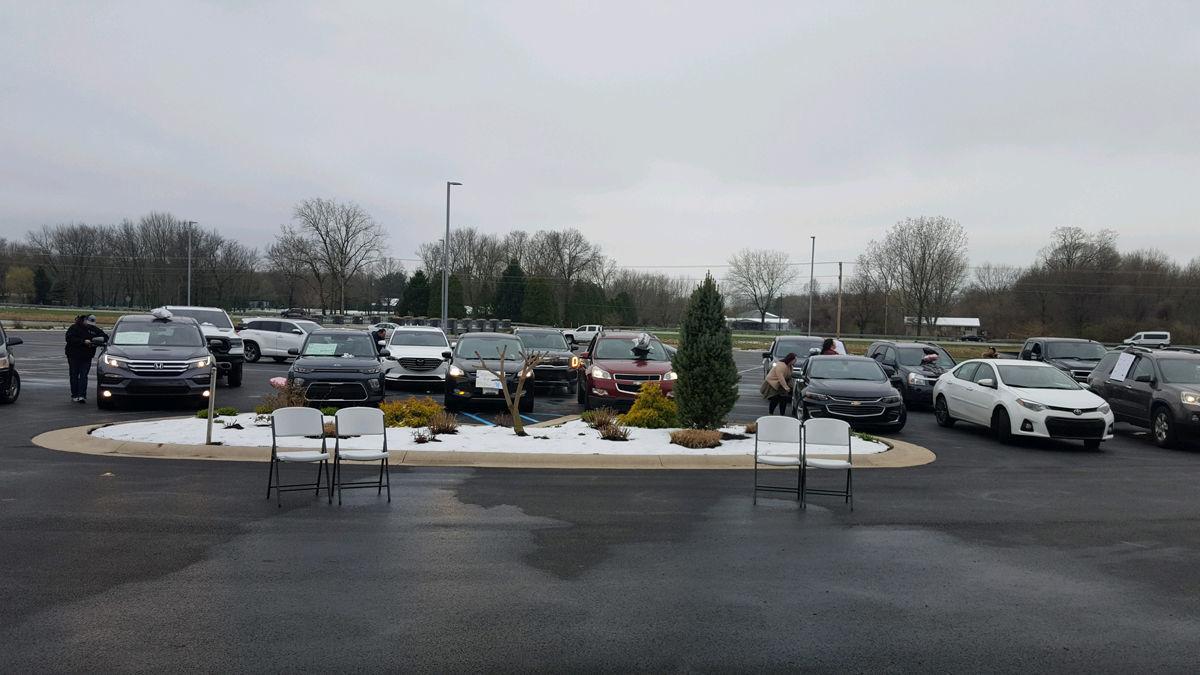 Guests line up in single file in the parking lot of the church to witness the ceremony. 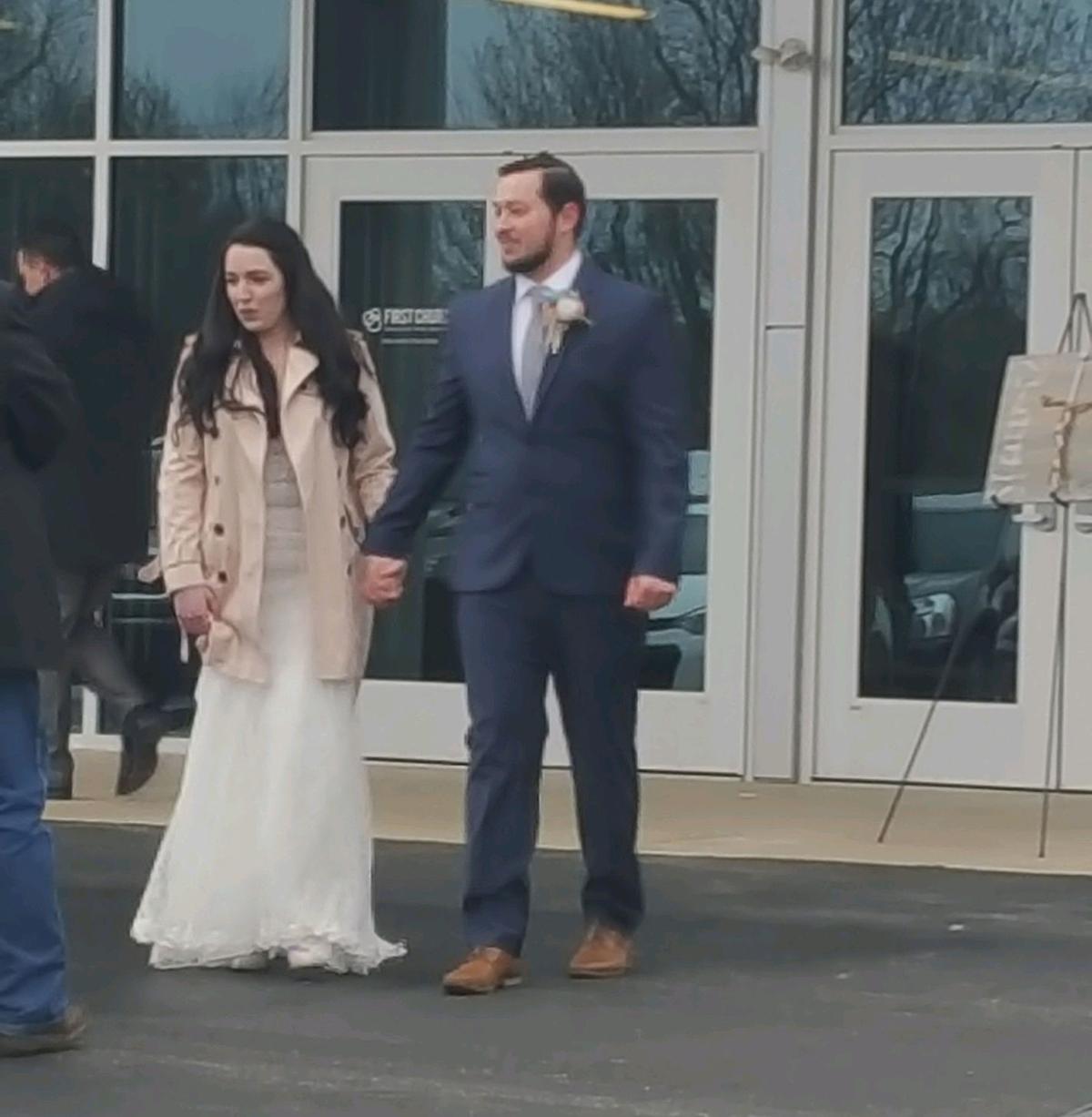 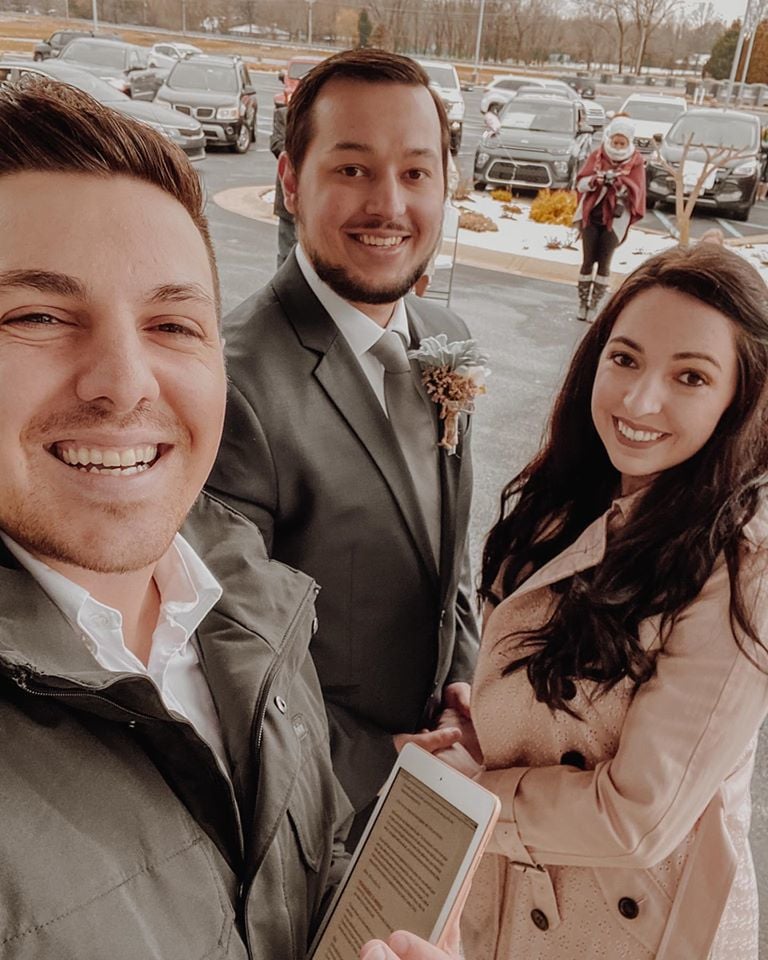 The couple poses for a wedding selfie with Zachary Fraley after the ceremony.

Patti and Zivko exchange vows in front of the doors to First Church in Wheatfield. Youth Pastor Zachary Fraley performed the ceremony.

Guests line up in single file in the parking lot of the church to witness the ceremony.

The couple poses for a wedding selfie with Zachary Fraley after the ceremony.

Recently, I was given the opportunity to attend a unique wedding ceremony unlike any other in the past: a “Drive-In Social Distancing Wedding.” While social distancing has proven to separate people physically, it has also brought us closer together. While I had no idea what to expect when I received the invitation, I knew it was something I did not want to miss. Opportunity rarely knocks twice.

Patti Zimmerman, of Hobart, and Zivko Prentoski, of Lake Station, had been friends for years before losing touch with one another. As luck would have it, the two reconnected at a mutual friend’s wedding. New Years Eve 2018 Zivko proposed to Patti at Navy Pier right as the fireworks exploded over Lake Michigan. “I was caught completely off guard but managed to rip my glove off in excitement without realizing it before saying ‘Yes!’” exclaimed Patti. Zivko planned to start 2019 off with Patti as his fiance.

The couple spent the next year planning their 400 guest wedding, which was originally planned for April 25, 2020, the closest date the couple could get to Patti’s grandparent’s wedding anniversary given other scheduling complications. “My parents were young when they had me so my grandparents were a big help in raising me. They took me to church every Sunday, made sure I completed CCD (Catholic Faith Formation classes) by being teachers, and even volunteered as Eucharistic ministers while I was an alter girl for several years.” said Patti. Patti and her family suffered the loss of Patricia “Non” Zimmerman (whom Patti is named after) in July of 2013.

In March, Patti and Zivko’s plans were sidelined by COVID-19 and Governor Holcomb’s Executive Stay-At-Home Order. Patti’s hopes and dreams of honoring her grandparents were shattered. But, after the heartbreak of postponing the wedding passed, Zivko approached Patti with an idea to hold a small ceremony on her grandparent’s exact anniversary date, to which Patti agreed instantly. Patti’s grandfather, Robert “Pop” Zimmerman, was over joyed and said, “Oh, Non would be so proud and excited. You know she will be there with us” when Patti informed him of their plan.

April 17, the day of the wedding, the sky was overcast and the wind a bit icy. I sat in my car with the window cracked an inch and the heat on high. Music rang in the air as we all waited for the couple to appear at the doors of the church. I watched a young woman, whom I later learned was the Maid of Honor, Meg, flit from one car to another, instructing them to position their cars in such a way that everyone could see the ceremony without a car obstructing the view. It worked out gloriously.

Soon the pastor, Zachary Fraley, and the groom appeared at the front doors of the church. The bride was first driven up to the walkway part way, then escorted by her parents to her waiting groom. Midway through the ceremony the couple braided three strands of rope based on the Biblical passage from Ecclesiastes, “A cord of three strands is not easily broken.” Faith in God provides a solid foundation to begin a marriage.

After the couple said “I Do,” they retreated inside the church to take a few pictures together with their parents. “Little did we know that during this time our friends and family were outside lining up their cars to make an aisle for Zivko and I to walk down while they played music, honked their horns, blew bubbles, and cheered out their windows,” explained Patti.

While their original wedding took over a year to plan, the “social distancing” wedding took seven days. Friends and family stepped up to the plate to lend a hand in orchestrating the bride’s hair and makeup, a photographer and even a bouquet for the bride and boutineer for the groom. Guests that could not attend the drive-In wedding were able to watch the ceremony live on Facebook. The next day after the wedding, one of Patti’s best friends asked them to come by her house. She surprised them with her uncle DJ-ing in the driveway and her aunt who drew a big heart with the couple’s names written in chalk so that they could do their first dance on a beautiful dance floor.

“We have no regrets when we talk about this beautiful day. Yes, our wedding party could not stand next to us because of social distancing standards but they were all in their cars in the parking lot honking and cheering us on. Everything worked out so well; we were surrounded by so much love and support, everything was perfect. The blessing in disguise was we were able to get married on the exact date I always hoped for to honor my grandparent’s love for God and love for one another. We hope that we can live up to everything they were together, who my grandma was, and who my grandfather still is to this day,” explained Patti.

Zivko and Patti hope that the Stay-At-Home Order and public gathering restrictions will be lifted by August so that they can have the wedding they originally planned. Congratulations Patti and Zivko!

Partly cloudy early with thunderstorms becoming likely during the afternoon. A few storms may be severe. High 82F. Winds WNW at 10 to 15 mph. Chance of rain 80%.