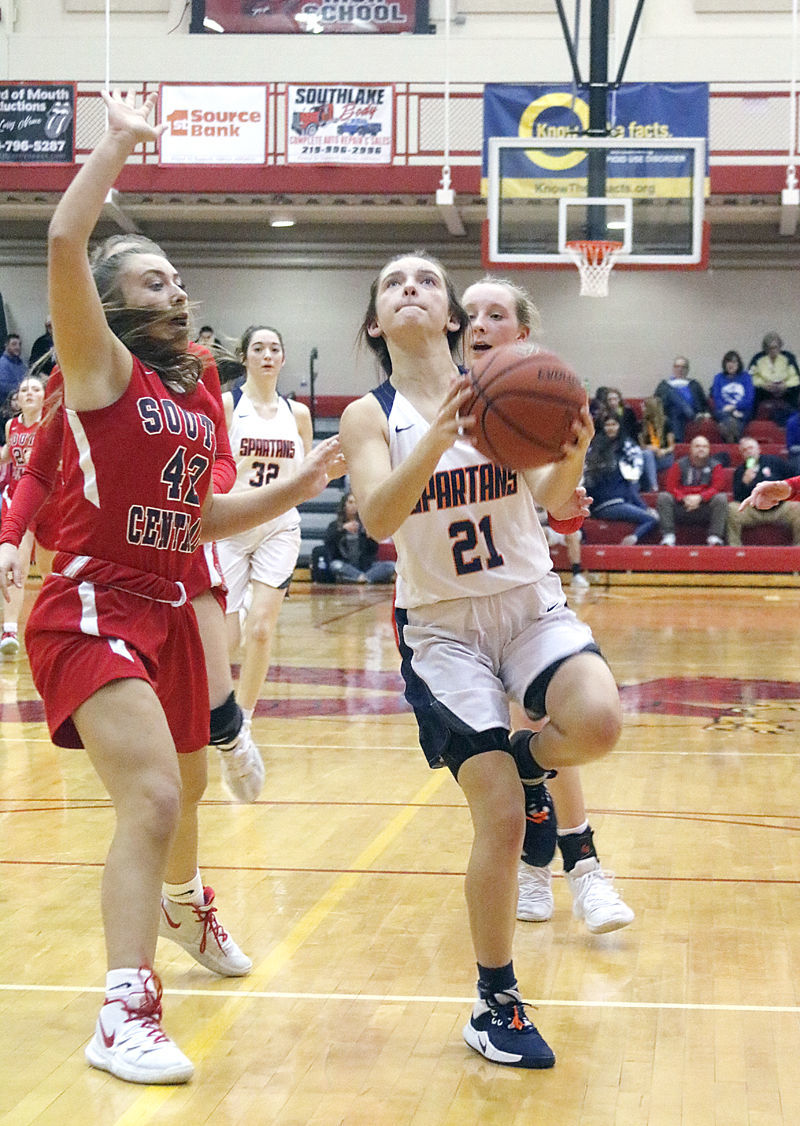 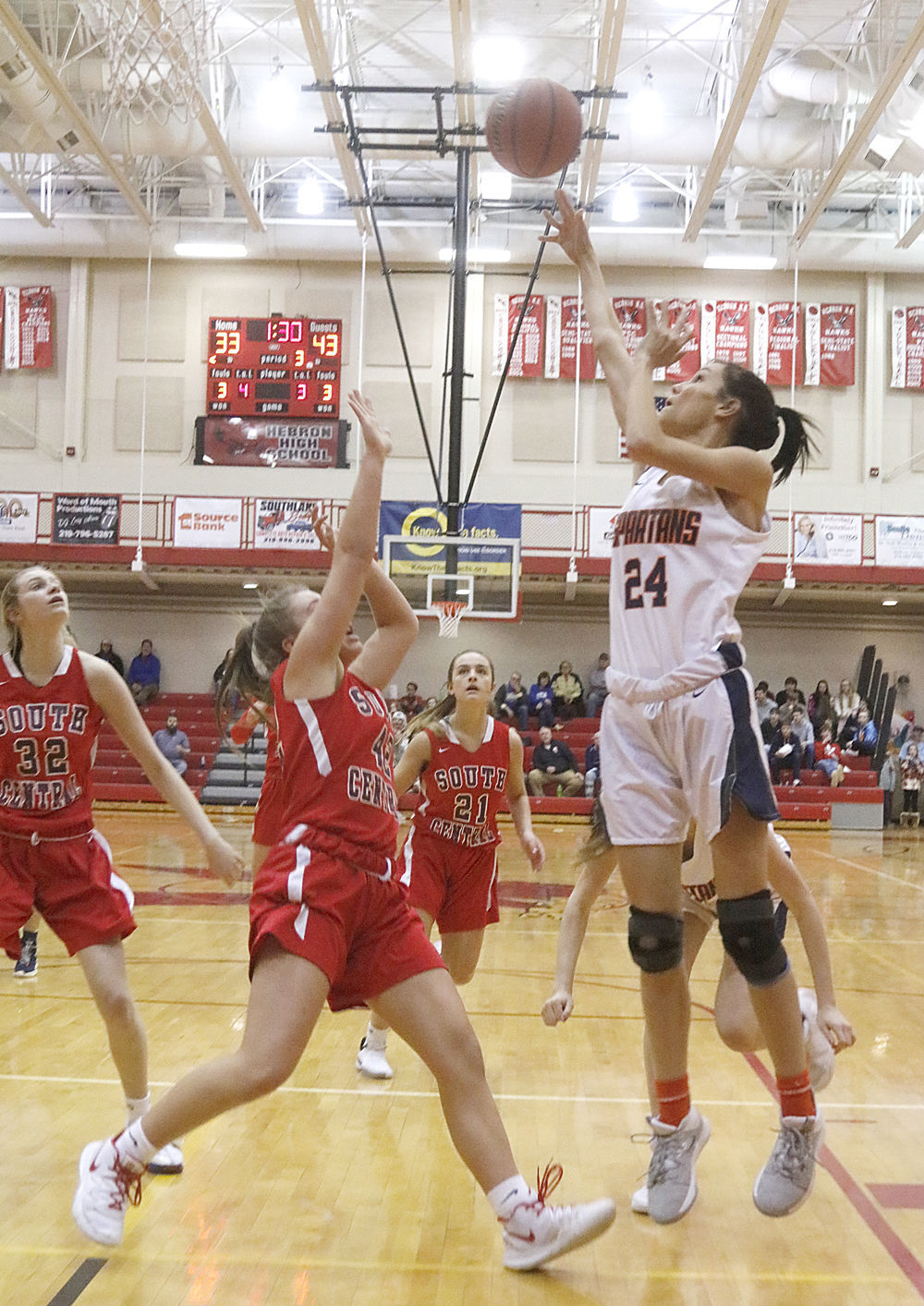 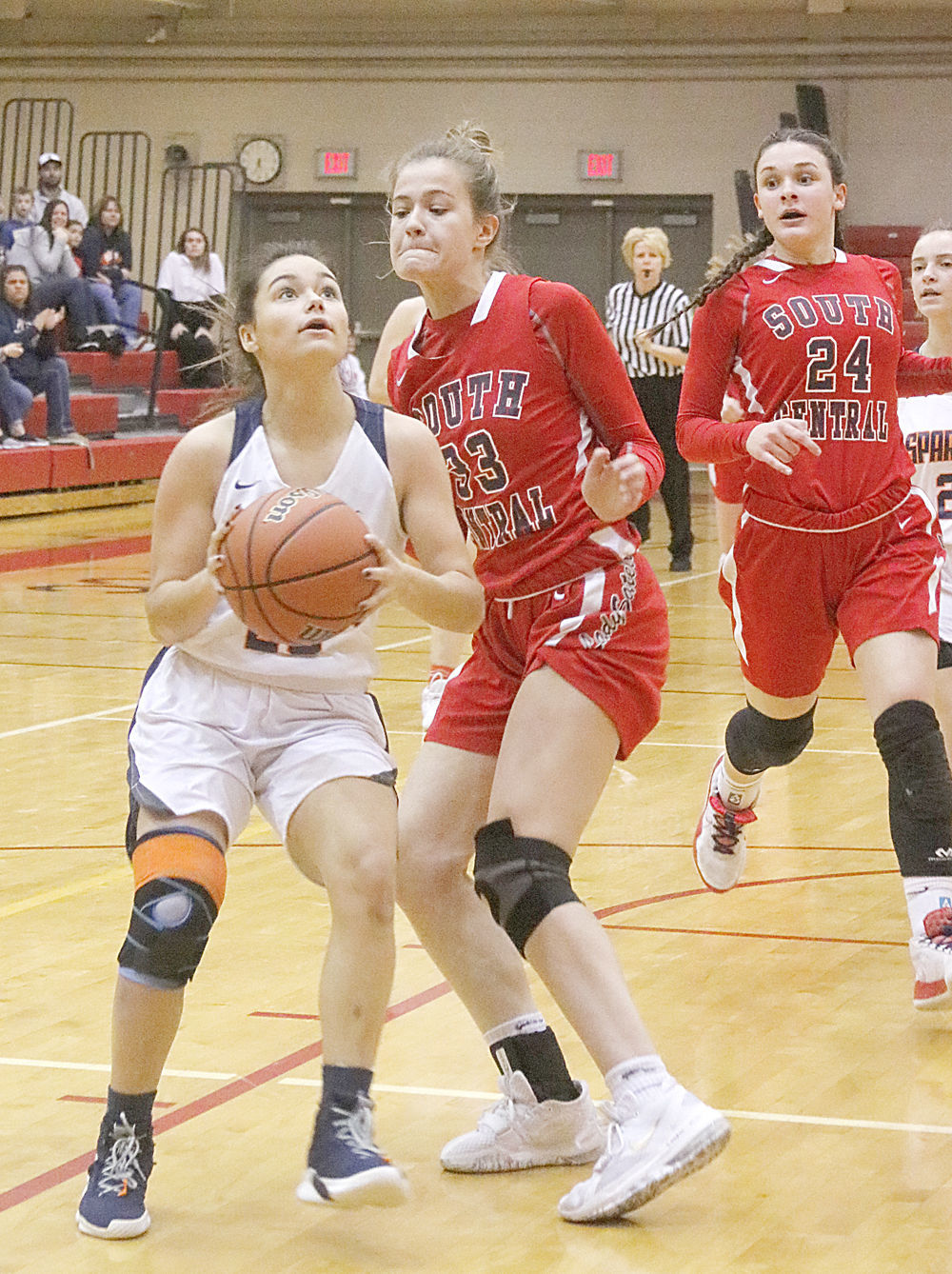 HEBRON — The North Newton Lady Spartans came into the Hebron 2A Sectional semifinal (Feb. 7) against South Central as huge underdogs. A lot of broadcasters and other media personalities said that the Lady Spartans would be lucky to be within 30 points of the Satellites because of their All-State senior Amber Wolf and high-powered offense.

All of that doubt didn’t seem to affect North Newton, who was coming off its first sectional game win in 17 years. The Lady Spartans gave South Central all it could handle even though they were outshot at the free throw line by 42 attempts.

The Lady Spartans outplayed South Central at times in the game, but couldn’t overcome the huge disparity at the charity stripe as the Satellites held on for a 64-51 win.

“We played with a lot of heart and focused in on defense to make South Central try to earn every point they got,” said North Newton coach Jenny Spillers. “ I can’t complain about our effort, we came out and had them (South Central) shell shocked.”

Behind a pair of baskets from senior Jamie Will and a layup from Harmoney Burke, North Newton raced out to a 6-1 lead.

South Central would fight back to tie the game up 6-6, but North Newton would reclaim the lead three times in the first quarter until two late free throws from South Central freshman Olivia Marks knotted things up at 13 to end the opening period.

North Newton sophomore Grace Hollopeter had a key 3-pointer in the opening quarter but the Lady Spartans were called for eight fouls over the first eight minutes of play, while not one foul was called against South Central.

That trend would carry on throughout the game and the Satellites would take advantage, making 34 of 53 shots from the foul line, while North Newton was just 5 of 11 in the game.

South Central senior Faith Biggs knocked down two 3-pointers early in the second quarter to help soften up North Newton’s zone defense. The Satellites then got more aggressive on defense with their 1-3-1 trapping zone and forced North Newton into 13 turnovers in the quarter. South Central went on a 14-2 run in the quarter to go up double digits and outscored the Lady Spartans 18-5 overall in the second period for a 31-18 lead at the break.

For North Newton, Will had one basket and Harley Schleman converted a 3-point play to account for their team’s offense in the second quarter.

“South Central is so good defensively and they put a lot of pressure on you,” added Spillers. “Once they force a turnover they are usually off on the break and converting it for easy points on the other end. South Central did that a bunch to us in the second quarter and was able to take control of the game.”

Just when most people thought South Central was on its way to blowing out the Lady Spartans, North Newton came out in the second half and again caught the Satellites by surprise.

Back-to-back 3-pointers from Hollopeter and Mackendzie Dresbaugh, who was battling through hamstring issues, accounted for a 6-2 scoring run by the Lady Spartans to start the third quarter.

South Central answered with a 7-0 run for a 16-point advantage.

However, Hollopeter came through in the clutch again for North Newton knocking down two more 3-pointers in the quarter to help spark a 14-5 run to reduce the deficit to seven points, 45-38.

“We fought back in the third quarter, and I don’t think a lot of teams have done that against them this year,” added coach Spillers. “That is the one thing I asked for them, I said don’t give up until this game is over. I don’t care what the score is; if we are winning; or losing by 40, which a lot of people thought we would be. The girls did that, they fought all the way to the end and I’m very proud of them for that.”

Delanie Gale helped steal the momentum back from North Newton as her 3-pointer late in the quarter gave her squad a double-digit lead, 48-38 heading into the fourth quarter.

It was all about free throw shooting in the fourth quarter for South Central. The Satellites outscored North Newton 16-13 with all of their points coming from the foul line. South Central was 16 of 26 from the free throw line over the final eight minutes.

Burke kept fighting for North Newton, scoring six points in the final frame, and Cayci Ehlinger connected on a 3-pointer, but North Newton couldn’t get one final rally going.

Hollopeter finished with 12 points to lead North Newton. Will finished her high school career with a 10-point effort, while Burke added eight, and Danielle Hinch, who had some key baskets for the Lady Spartans in the first and third quarters, finished with six.

With the loss, North Newton finished the season at 11-12.

“We learned a lot as a team this year,” said Spillers. “We had our ups and downs, but I think we are headed in the right direction and the team was playing its best basketball at the end of the season.”

The future does look bright for the Lady Spartans as they lose just one senior, Jamie Will.

“It’s hard losing Jamie,” said Spillers. “She did so much for us and really improved this year. She could score when we needed her to and she was good defensively and on the boards. She will be missed next year. As for all of the returning players, we are going to work hard over the offseason and be in a better spot to open the season next year. I need them to commit to this program. We will continue to focus on defense because that is how we are going to compete next year.”

South Central advanced to the sectional finals and won the championship by defeating North Judson 53-38 the next night.

Coach Spillers didn’t talk about the disparity of the foul calls or the number of free throw attempts, but many fans left Hebron Friday night wondering if an upset could have truly been possible that night.