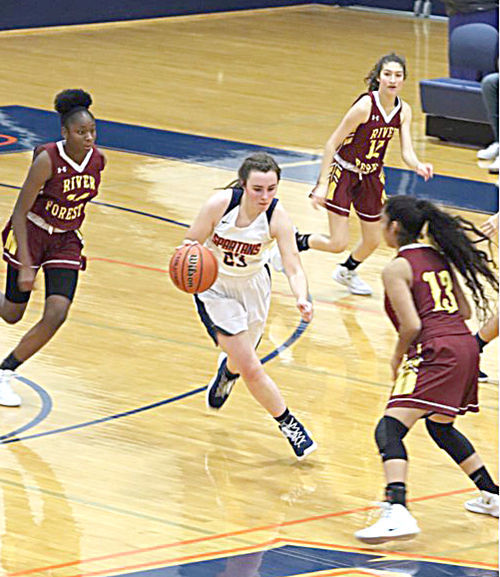 North Newton’s Harmoney Burke driving to the basket after pulling down a defensive rebound against River Forest. 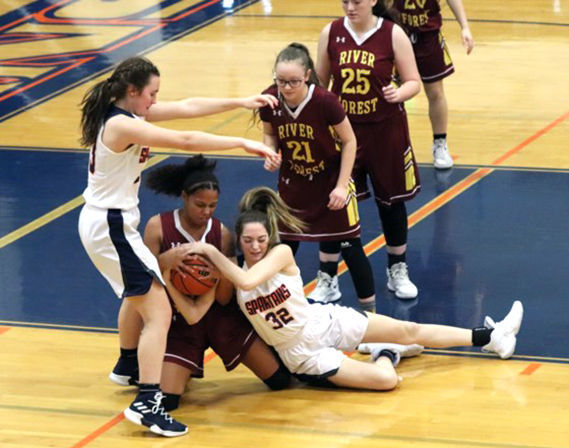 North Newton’s Heidi Schleman dives to the floor going for a loose ball against River Forest.

North Newton’s Harmoney Burke driving to the basket after pulling down a defensive rebound against River Forest.

North Newton’s Heidi Schleman dives to the floor going for a loose ball against River Forest.

MOROCCO — The North Newton Lady Spartans were ready from tip-off to the final seconds ticking off the clock. The Lady Spartans came into the game against River Forest 0-2 however that streak was about to be ended.

The Lady Spartans were able to score immediately after Zoe Parman put the tip-off directly into the hands of senior Jamie Will. North Newton would continue to score an additional eight points before the Lady Ingots would put points onto the board. Zoe Parman would lead the team with six points in the first quarter. The Lady Spartans would lead the Lady Ingots by eight points at the end of the first quarter.

Heading into the second quarter the Lady Ingots would get aggressive in attacking the basket and being able to draw blocking fouls. However, the Lady Spartans would find a good solution to the offensive attack. The Lady Spartans would be consistent in their shot selection putting up 17 additional points to the 14 by the Lady Ingots. Harmoney Burke and Mackendzie Dresbaugh would each lead with six points in the second quarter.

In a timeout, you could hear the praise coming from coach Jen Spillers “I am so proud of you guys working to take your time and breaking the press.” The Lady Spartans would put up 12 points in the third quarter compared to eight for River Forests for a 46-31 lead.

The Lady Spartans would only outscore the Lady Ingots by a point in the fourth quarter. Throughout the fourth quarter, coach Spillers would substitute the teams of three to four girls out onto the floor. Those substitutions would be the aggressive maneuvering off the court and the team would get a quick rest and receive feedback about plays being made out on the court. Lady Spartans would score 18 points to the Lady Ingots 17 in the final quarter as North Newton would go on for the 64-48 win.

The Lady Spartans were led in scoring by Mackendzie Dresbaugh with a total of 13 points, while she added four assists, three steals, and two blocks. However, it would be Harmoney Burke that would steal the night with a double-double against River Forest. She would have 10 points and 10 rebounds to go with three steals. Danielle Hinch had a total of four steals and Zoe Parman had four assists for the night.

“They are working together as a team,” added Spillers. “I am really happy with a good team win today.”

The postponed game against Covenant Christian has been reschedculed for Nov. 25 starting at 5:30 p.m.

Partly cloudy early then becoming cloudy with periods of snow this afternoon. High 31F. Winds SE at 10 to 20 mph. Chance of snow 80%. About one inch of snow expected.

Snow this evening will mix with and change to rain late. Some sleet or freezing rain possible. Low 28F. Winds SSE at 15 to 25 mph. Chance of precip 100%. 1 to 3 inches of snow expected.

Cloudy and windy with occasional rain...mainly in the morning. Snow may mix in. Morning high of 41F with temps falling to near 25. Winds WSW at 20 to 30 mph. Chance of rain 90%.