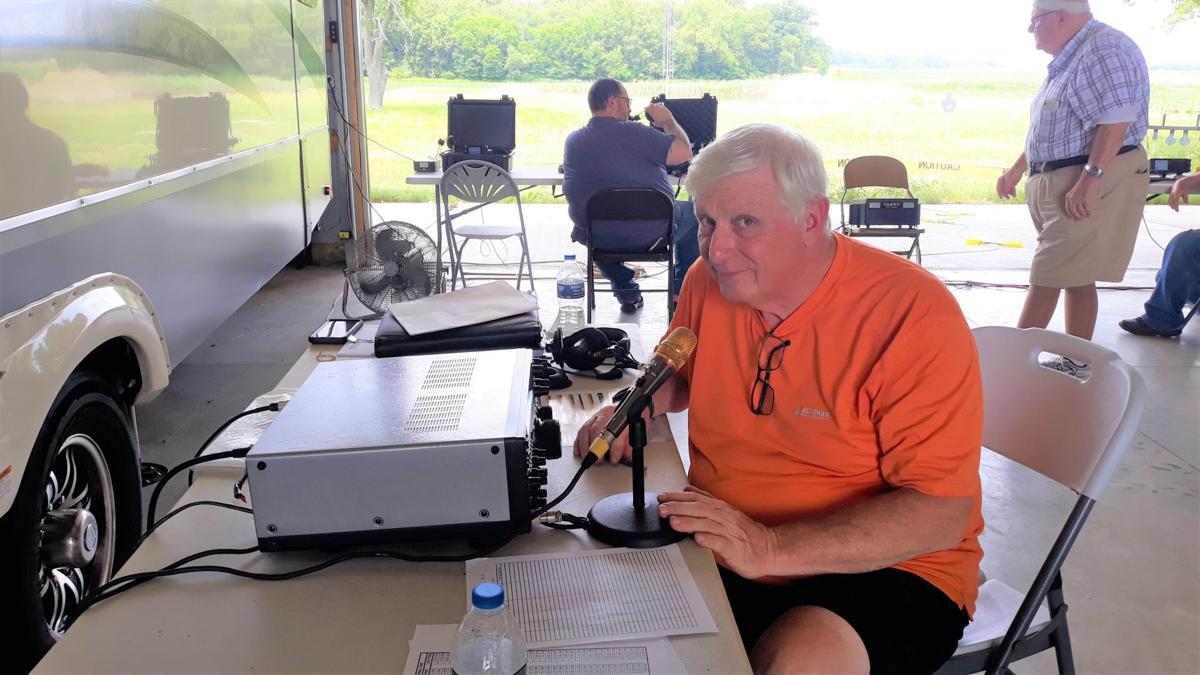 Mike Swiader, President of the Amateur Radio Association of Newton County, is shown during the 2020 Field Day. 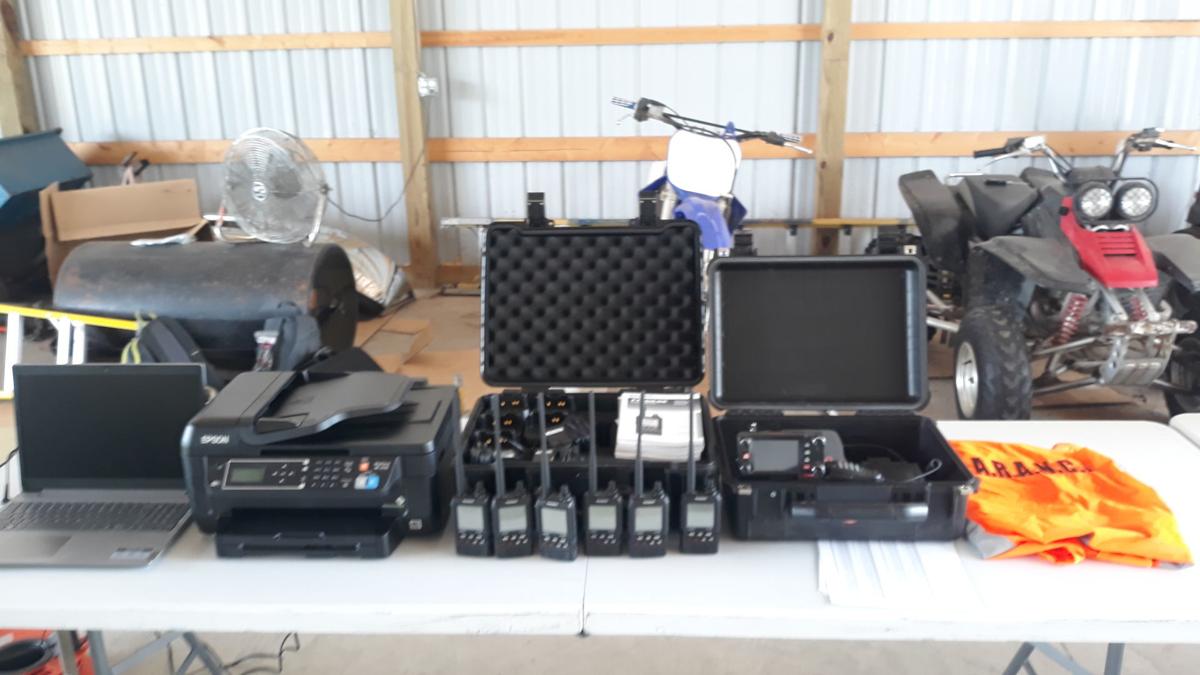 Mike Swiader, President of the Amateur Radio Association of Newton County, is shown during the 2020 Field Day.

All across the world, radios hummed to life and enthusiasts searched up and down the bands for anyone to make contact with. They sang their callsigns into the void and wrote down each one that came in response—songbirds chirping in the trees and waiting for a reply, except over thousands of miles. Operators from Virginia, Pennsylvania, New York, Missouri, Ontario, and many other locales checked in with one radio broadcasting from Newton County, Indiana.

At night, when the rest of the world awoke, the competition went global. It may sound like a game, but among amateur radio enthusiasts, Field Day is treated with deadly seriousness—it is, truthfully, preparation for global catastrophe.

“What we’re basically doing is we’re simulating a national emergency,” says Mike Swiader, President of the Amateur Radio Association of Newton County, Indiana. “Either man-made or natural—if the grid goes out, the only reliable source of communication is ham radio. If the time comes, ham radio’s always been there.”

The simulation takes every opportunity to mirror a real-world crisis—every piece of equipment runs on generator power alone, using no commercial electricity whatsoever. There are no breaks—the event goes on for twenty-four hours uninterrupted. As Swiader says, “If you want to stop by around three o’clock in the morning, we’ll be here.” The operators grill out while they mind their radios, enjoying burgers and hot dogs, but there is a grim subtext—in the event of a crisis, the food on hand may be all they have left.

“[Field Day] is about testing our equipment and making sure it’s in working condition,” adds Chad Wilson, Vice President of the club. The county’s amateur radio network must always be vigilant, ready for disaster to strike—otherwise, emergency authorities would be the dark. In an isolated area like Newton County, it would cost lives.

Since 1933, ham radio enthusiasts across the United States and Canada have engaged in Field Day activities in order to test operational capabilities in the event of a disaster. The contest takes place on the fourth weekend of June, and in recent years, has spread to Mexico and around the world. It is sponsored by the Amateur Radio Relay League, who describe it as “ham radio’s open house.” Indeed, many operators are first introduced to the hobby through this massive nationwide event, during which over 40,000 operators gather to broadcast in “abnormal situations and less than optimal conditions.” The bands are truly buzzing during this event, with radio chatter reaching a yearly high, providing an excellent gateway for those who wish to enter the hobby—either by participating with a club or even just listening in on their own.

The coronavirus has demonstrated all too well how a crisis can cripple day-to-day life overnight—making clear why ham radio is so important to the community.

“With the virus, nursing homes who are still communicating via the telephone system may eventually need us to be out in the field. If there’s a lack of communication anywhere, we’re called. We are part of the Homeland Security—ham radio is under their umbrella. If someone needs communication due to the coronavirus or otherwise, we’re out there to help,” says Swiader.

The Amateur Radio Association stands ready to help the community in such a crisis—and this event is but one of many to help prepare them for that sacred duty.

“Every Thursday, we have a Net—practice for if something were to actually happen, such as a tornado. People get used to each other’s voices, how I run Net, protocol so we’re not stomping over each other as we talk. It’s so we can share information in a very precise manner in a way where we’re not all panicked,” says Wilson.

He also mentions another activity known as a Foxhunt, in which someone takes a radio and broadcasts while the others try to triangulate his or her location—practice for search and rescue operations, as well as tracking down illegal broadcasts. It also works as a competition—to see who can find the broadcaster in the least time, while driving the fewest miles.

The crux of the Association’s communication capabilities—on Field Day or any other—is the Titan antenna, which stands at 25’ tall and weighs only 25 pounds, allowing for easy transportation wherever the operators need to broadcast. It can communicate across virtually the entire amateur radio spectrum. The Association owns two such antennae, and both were on display during the Field Day, standing proudly in Treasurer Gary Kole’s backyard.

“That whole thing will lay over the top of a car,” says Swiader. “Strap it right on top, go wherever you need to go, put it back down. Realistically, I could have that antenna set up in twenty minutes.” If they need to mobilize, the Association is ready.

While the primary goal of Field Day is to test the equipment, there is an interesting side goal: the contest. The winner of the contest is determined by which group can contact the most stations within the 24-hour period, and while there is no prize aside from bragging rights, many operators take the competition very seriously. In a ten-minute period, Swiader was able to contact twelve different stations, and by the conclusion of the Field Day, the club connected with 313 of them. The standing record was posted in 1994 by a group in Conejo Valley, California, who contacted an astounding 3,460 different stations.

“We’re not doing this for contest points,” says Swiader. “We’re doing this to demonstrate what we can do out here. We’re here to show the community what we’re all about, how many contacts we can do in a short period of time if need be.”

Overall, the Field Day is a testament to how quickly ham operators can restore worldwide communication to Newton County should the worst occur. Trust that Newton County’s network of amateur radio enthusiasts will be operating from every medical center, police station, fire department, and vital building amidst a crisis, extending an umbrella of protection throughout the region. Ideally, these operators will never be called to action—but if they are, the Association stands ready and willing to protect Newton County.

To learn more about amateur radio or the Amateur Radio Association of Newton County, Indiana, contact club president Mike Swiader at 815-409-5070 or ka9e@usa.com.