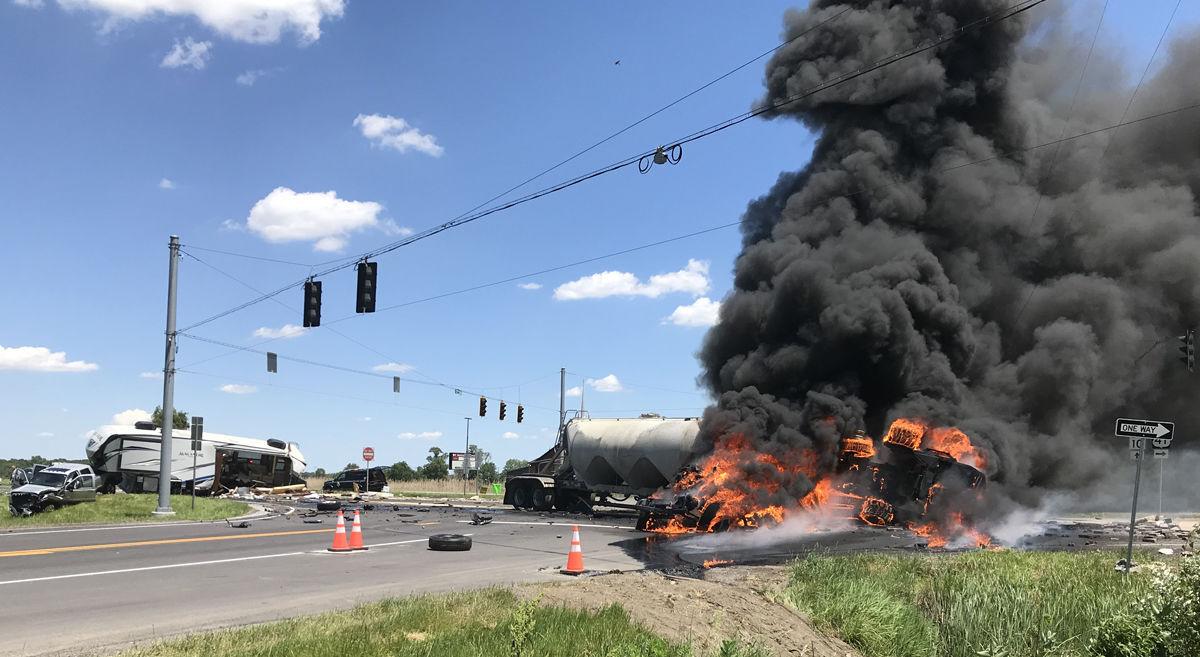 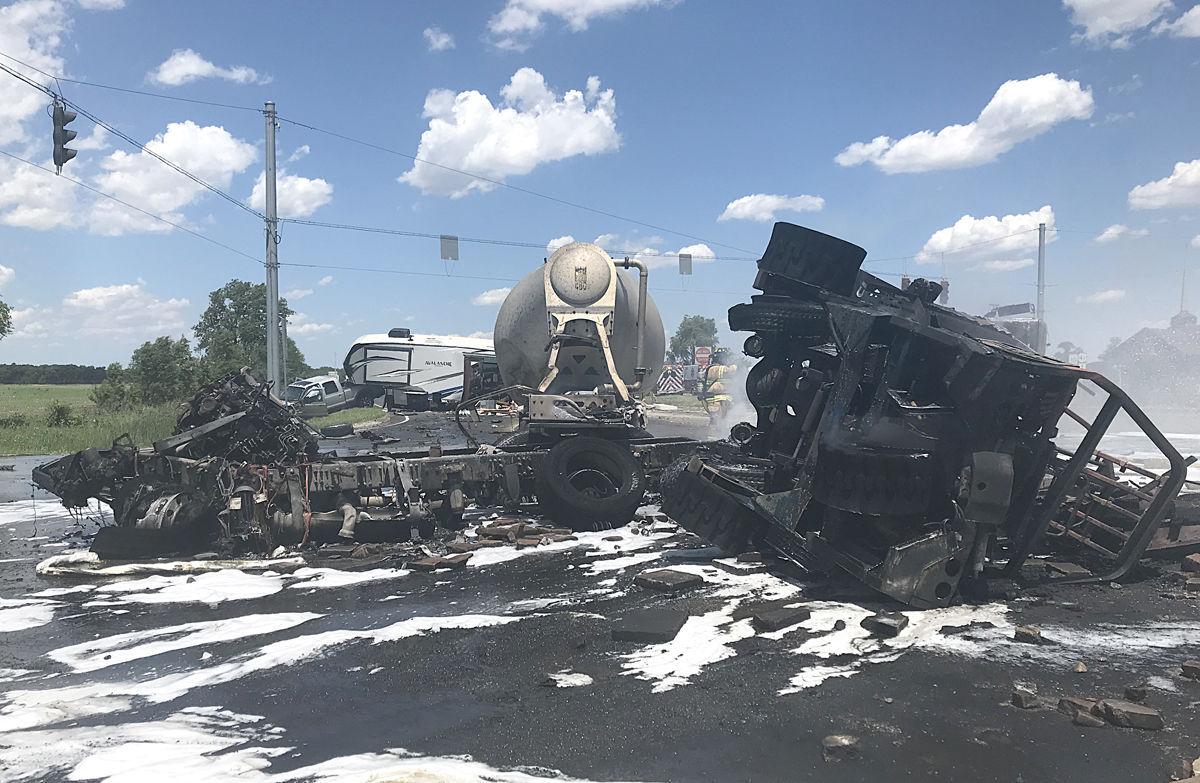 Another view of the accident scene at State Road 10 and U.S. 41. 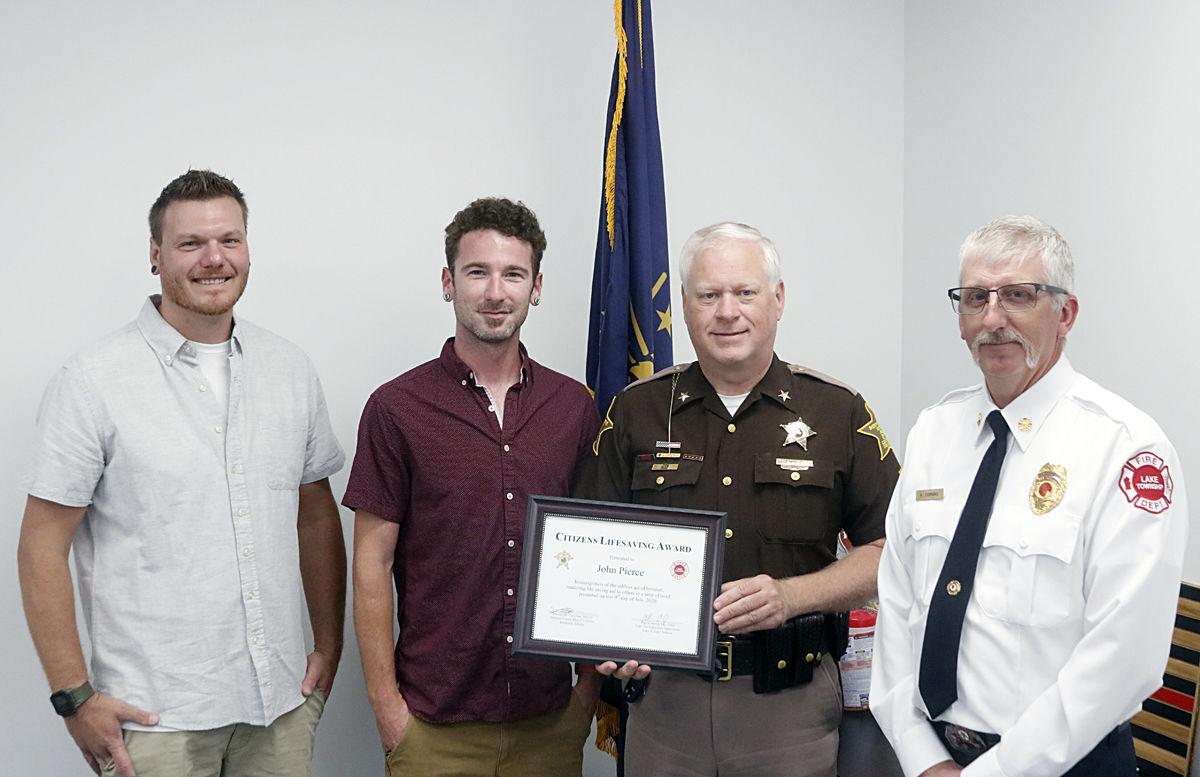 Another view of the accident scene at State Road 10 and U.S. 41.

LAKE VILLAGE — Fate, divine intervention whatever you want to call it — something or someone was overlooking the intersection of State Route 10 and U.S. 41 in northern Newton County on June 11.

Two employees of Midwest Petroleum Service out Danville, Illinois were in the right place and the right time to save several lives when a three-vehicle accident occurred right before their eyes with two of the vehicles becoming engulfed in flames.

For their actions that day, both men were awarded Life Saving Awards from the Newton County Sheriff’s Office in Lake Village on July 9.

John Pierce, 31 of Fithian, Illinois, and Andrew Beck, 33 of Danville, Illinois, had been sent to the area for some work at Phil’s Truck Stop, located right off the State Route 10 and U.S. 41 intersection.

“I had to go back into the truck stop two or three times because I kept forgetting things, otherwise we would have been right in the middle of that intersection when the accident happened,” said Pierce.

But the quick action of the two men prevented the need for the county coroner to be called as they quickly ran into the scene and pulled the drivers from their vehicles before becoming fully engulfed in flames.

“We didn’t know what was in the tanker the semi was hauling but we knew it was going to get a lot worse and we decided right then we needed to go in and do something,” said Pierce.

Lake Township Fire Chief Allan Corning described the scene as horrific and when he along with his first responders arrived at the scene they didn’t know that Pierce and Beck were already working to get the drivers out.

“It was a heroic effort on your part to do what you did,” said Corning during a ceremony honoring Pierce and Beck.

Newton County Sheriff Tom VanVleet remarked that people willing to help in times of crisis have decreased over the years as many people today would rather video the scene and then share it on social media.

“This was a serious accident and without their heroic efforts a lot of lives would be different today,” said VanVleet.

Deputy Dave Miller stated that without a doubt there would have been two fatalities that day if it wasn’t for Pierce and Beck.

“Everything you did at the scene saved lives that day,” said Miller.

Pierce and Beck, who have been friends since before they were in kindergarten, thanked the first responders who were in attendance for all that they do.

The two men even stayed at the accident scene after first responders arrived to continue to help out.

“When we were getting to leave the scene we saw two glass crosses laying on the road and we couldn’t believe something like that would have not broke during the accident,” added Pierce.

Pierce and Beck took that as a sign and they each now have one of those glass crosses from the accident.

For rent in Watseka