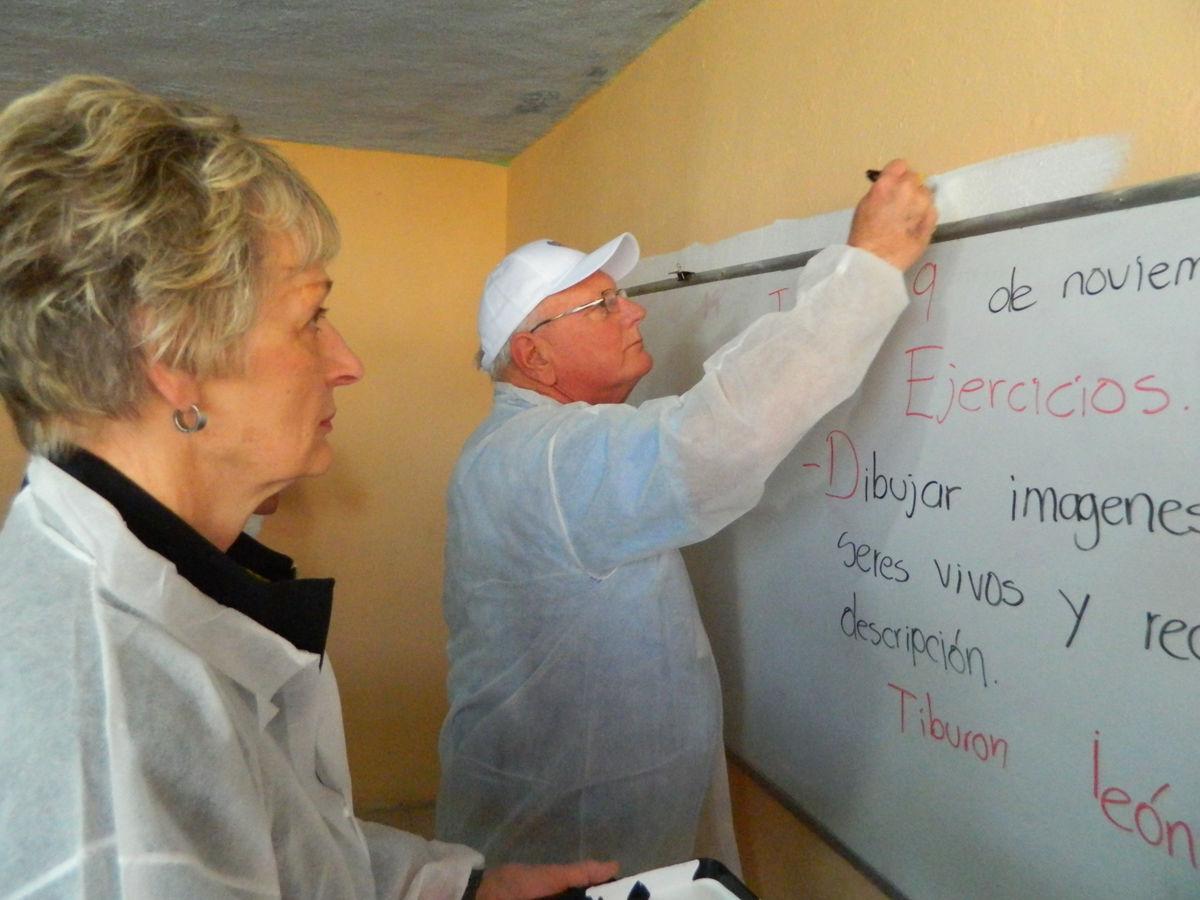 John and Sue Frischie are shown repainting a classroom in Mexico. 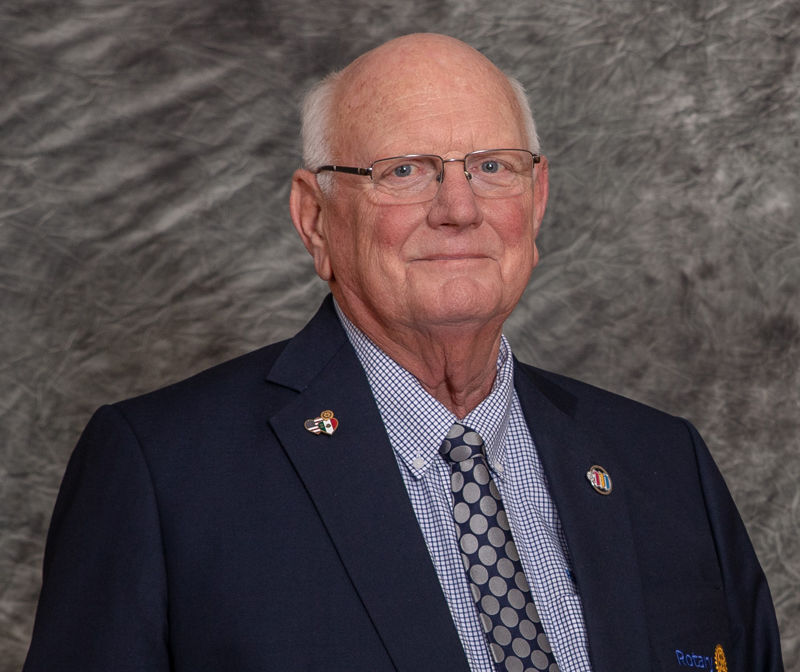 First said by Ben Franklin, and never more applicable than today, it’s a creed John Frischie lives by. The coronavirus has forced the world to adapt, and Frischie finds himself in the unique position to facilitate change for the better.

The club’s motto is “Service Above Self,” and Frischie has been called to embody those words like few governors before him. The coronavirus has forced the club to change or be finished.

His record is impeccable: 28 years as an agriculture educator at South Newton, receiving numerous teaching awards—most impressively the Milken Educator Award, of which only 30 are presented a year. He later worked as Director of Secondary Education and as an administrative assistant, as well as Project Leader for Team HOPE, an initiative led by former US Education Secretary William Bennett to develop more accurate and cost-effective history textbooks. In 2016, he was inducted into the Kentland Hall of Fame.

Now, he adds Rotary District Governor to his resume, the first person from the Kentland Rotary Club to ever serve in that position.

But what exactly is Rotary International?

“It’s not a lodge,” jokes Frischie, “It’s not religious, not political—you’ll not see any of my posts on Facebook that have to deal with politics. We’re open and friendly.”

Founded in 1905 by four friends in Chicago, Rotary is one of the oldest and largest service organizations on the planet, with 1.2 million members in over 200 countries around the world. They sponsor a diverse group of initiatives, ranging from eradicating polio to promoting global peace to increasing literacy in impoverished nations.

“All of our workers are volunteers. That’s unique. We’re volunteers, we’re here to help the world,” says Frischie. Even the club’s international president works entirely as a volunteer.

Frischie’s first experience with the Rotary Club was bringing FFA students to demonstrate the parliamentary procedure and how to run a meeting to club members when speakers were suddenly forced to cancel.

“So here you got sixteen, 14-year-old kids telling 60-year-old businessmen how to run a meeting, and they’re all going, ‘Well, I didn’t know that!’” says Frischie.

He left such an impression on the club that he was invited to join in 2006, after retiring from South Newton. He accepted, and if anything, found himself busier than ever before.

So, what has the Kentland Rotary done for the community?

In the wake of the coronavirus, the club received a $10,000 grant from the Newton County Foundation, which they used to help a number of community organizations, such as the Brook Church to provide meals. They’ve also distributed food vouchers for local grocers like Murphy’s among families in need. The Rotary Club also purchased 105 $25 coupons for Monical’s Pizza, donating them to public service workers such as members of the Sheriff’s Department, dispatchers, town police, and every EMT in the county.

The Kentland Rotary reaches across the world to help those in need—and sometimes, that means providing relief right in their own backyard.

On June 28th, 2020, large portions of Kentland found themselves underwater, entire homes nearly submerged by dangerous flash flooding. The community reeled with vast damage and no flood insurance to pay for it. In the aftermath, the Rotary Club was there.

“There were calls when I put things about Kentland flooding on Facebook, asking how they could help. When it gets more organized, we may be able to raise some funds, I think,” says Frischie, although any fundraising options are still being explored. “There were three or four of us that went up the first Sunday and we went door-to-door and interviewed people on their damage. That doesn’t show up in the paper, that Rotary did this.”

But, Frischie says, it isn’t about the recognition.

“The Rotary is happy to just be helping people in the community.”

Now, Frischie turns his gaze to the district at large, and at first glance, it can seem overwhelming. There’s enough good to be done that the Kentland Rotary always has a full plate, but Frischie is responsible for overseeing more than fifty such clubs all across northern Indiana and its outlying areas. Dozens of food pantries, libraries, and other community organizations all crying out to better help their residents. Every town in the district has needs like Kentland, and fulfilling those needs is the work of thousands.

Recently, these clubs have encountered new obstacles to fundraisers that have gone on the same way every year for decades, like clockwork. Suddenly, gathering everyone in a small room for a fish fry full of good spirits and mingling isn’t the best idea. Some would be daunted by these circumstances, but Frischie sees no challenges: only opportunities for improvement.

“You’ve gotta carry that positive attitude. Don’t ever tell me I can’t do something,” Frischie said.

He points to the example of a nearby club.

“One club had a drive-thru chicken dinner and made $300 more than they did the last time they had it in person,” he added. “Instead of being discouraged, go out and see how much better you can do.” These uncertain times, then, are more than cause for misery and woe; they are the perfect chance for growth and innovation, to reinvent the old ways and create positive change.

Some clubs are struggling to meet that lofty goal.

“There are a lot of clubs that haven’t met, so that’s a concern. They apparently don’t want to meet virtually,” Frischie said.” It is bitterly ironic that the same problems requiring community involvement and service to others have made participation impossible for some. “People tend to say, ‘Oh, we’ve always done it that way.’ You can’t do that anymore,” says Frischie.

He adds that that sort of thinking is why service organizations nationwide are struggling with membership. But although traditions differ between generations, residents of every age are united by the common goal to help others. Frischie and the club’s international president share the goal of attracting young members to the Rotary.

“We are working here in Kentland to have what we call electronic or passport membership, where you can be a member and never set foot in this room, but you can show up and help us sell pancakes.” This would make involvement with the Rotary more palatable for younger residents, as well as those who may not be able to travel to Kentland on a weekly basis.

Another Rotary outreach program Frischie praises is Interact, a service club for high schoolers and middle schoolers who work to develop leadership skills and integrity, as well as a sense of community and responsibility. The Kentland Rotary sponsors one such club at South Newton, where students may work on numerous community service projects to benefit the people of Kentland.

“No matter what happens, clubs need to continue to meet virtually,” says Frischie, who has been working to bolster Rotary’s online capabilities since 2015.

For its part, the Kentland Rotary is changing to meet the community’s needs, hosting their annual pancake breakfast as a drive-thru on August 8th at the Kentland Community Center to raise funds for Junior Achievement.

“You drive up, tell us how many pancakes you want, if you want sausage, or biscuits and gravy, or eggs, or whatever you want. Condiments will be on another table with individual packs of syrup. I have no reason to believe it’s not going to be really successful,” says Frischie. “We don’t charge for breakfast—it’s all donations.”

Overall, Frischie will determine how the Rotary changes in Northern Indiana, how it meets the new challenges presented by coronavirus, and the inevitable return to a “new normal.” There has never been a greater time for Rotary to change the way it helps people, and in doing so, Frischie will have to make sure all members may participate in restoring their communities to life as it was before the pandemic—things will have to change, or they’ll be finished.

Readers interested in learning more about the Rotary Club and how they can help may contact John Frischie at 219-863-2482 or by email at rotaryfrisch@gmail.com.