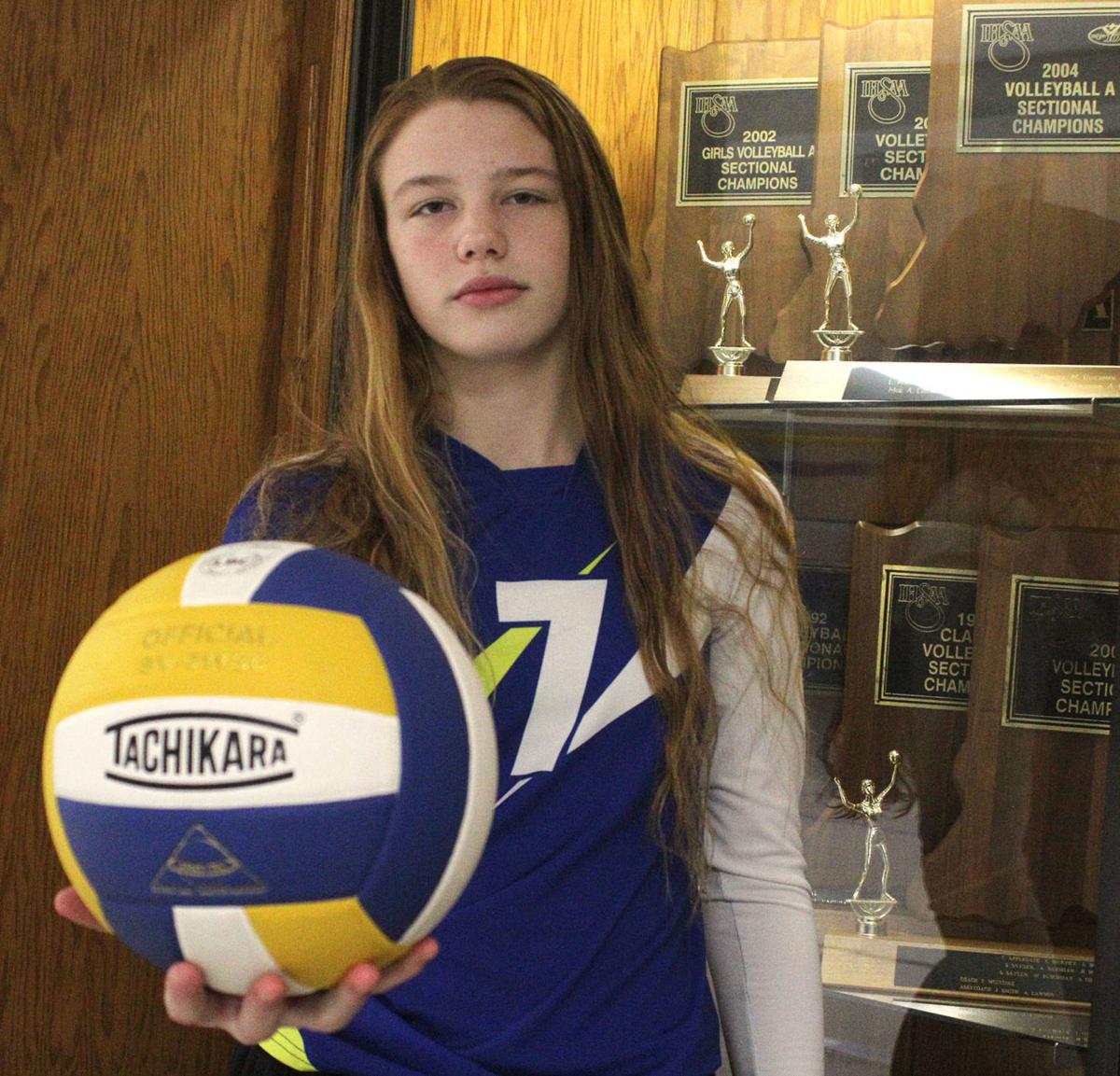 Lynzi Heimlich closed 2019 as an All-Midwest Conference first teamer with 331 kills, 196 solo blocks, 294 assists and 178 digs and helped her team do a decent amount of winning this past season. The Vikings (16-14) were above .500 for the second consecutive year and reached their first sectional championship match since 2016. 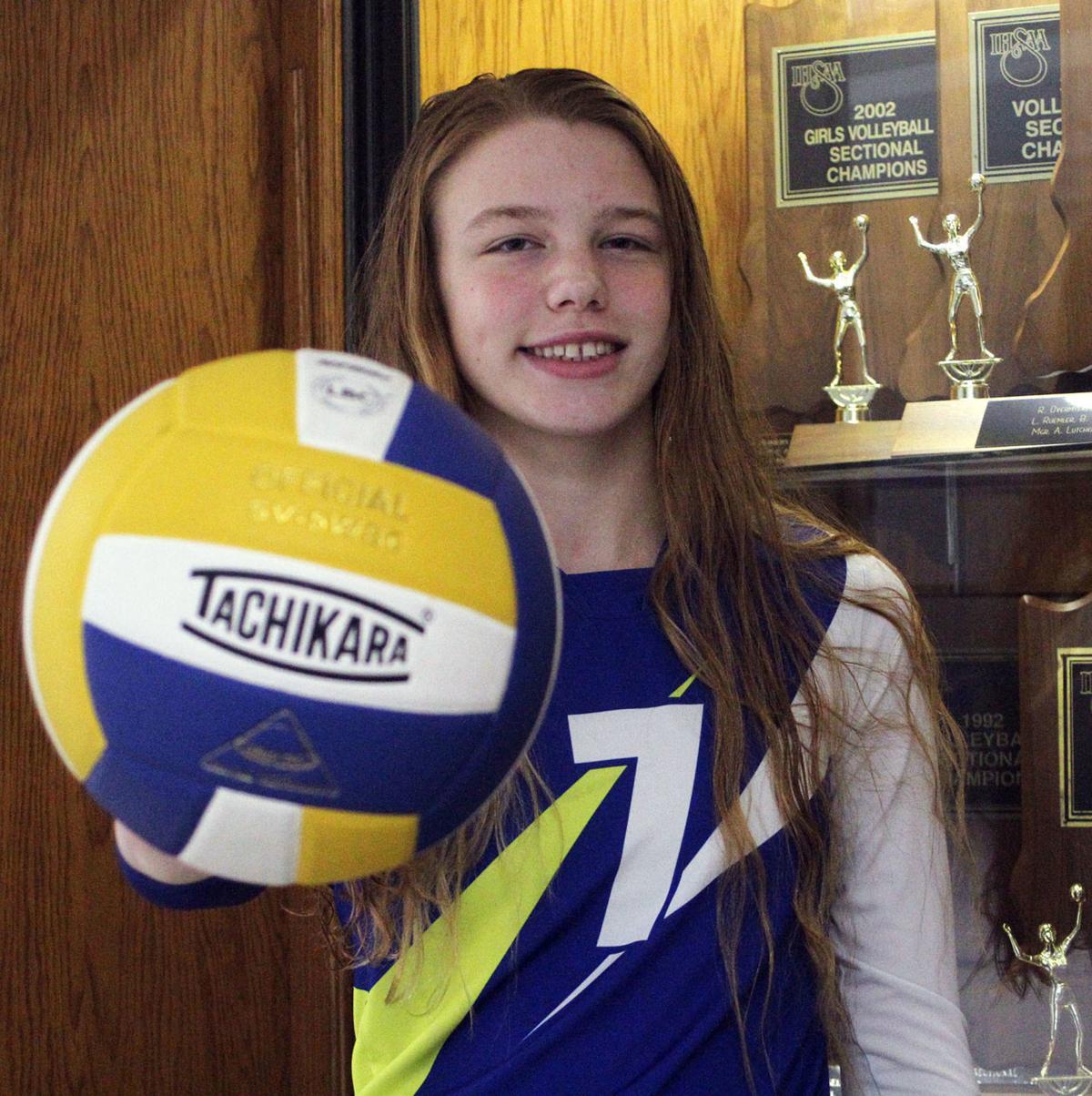 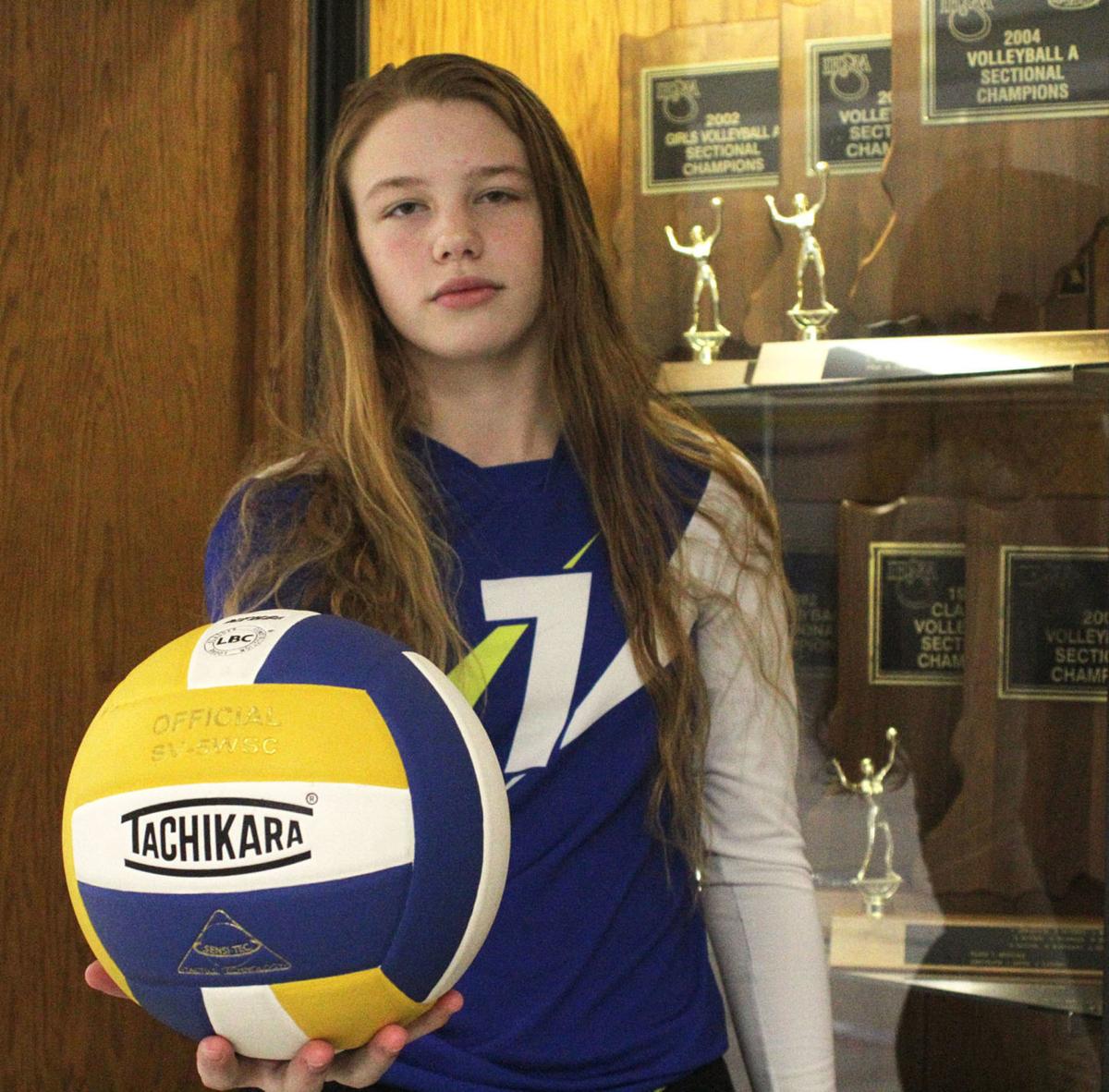 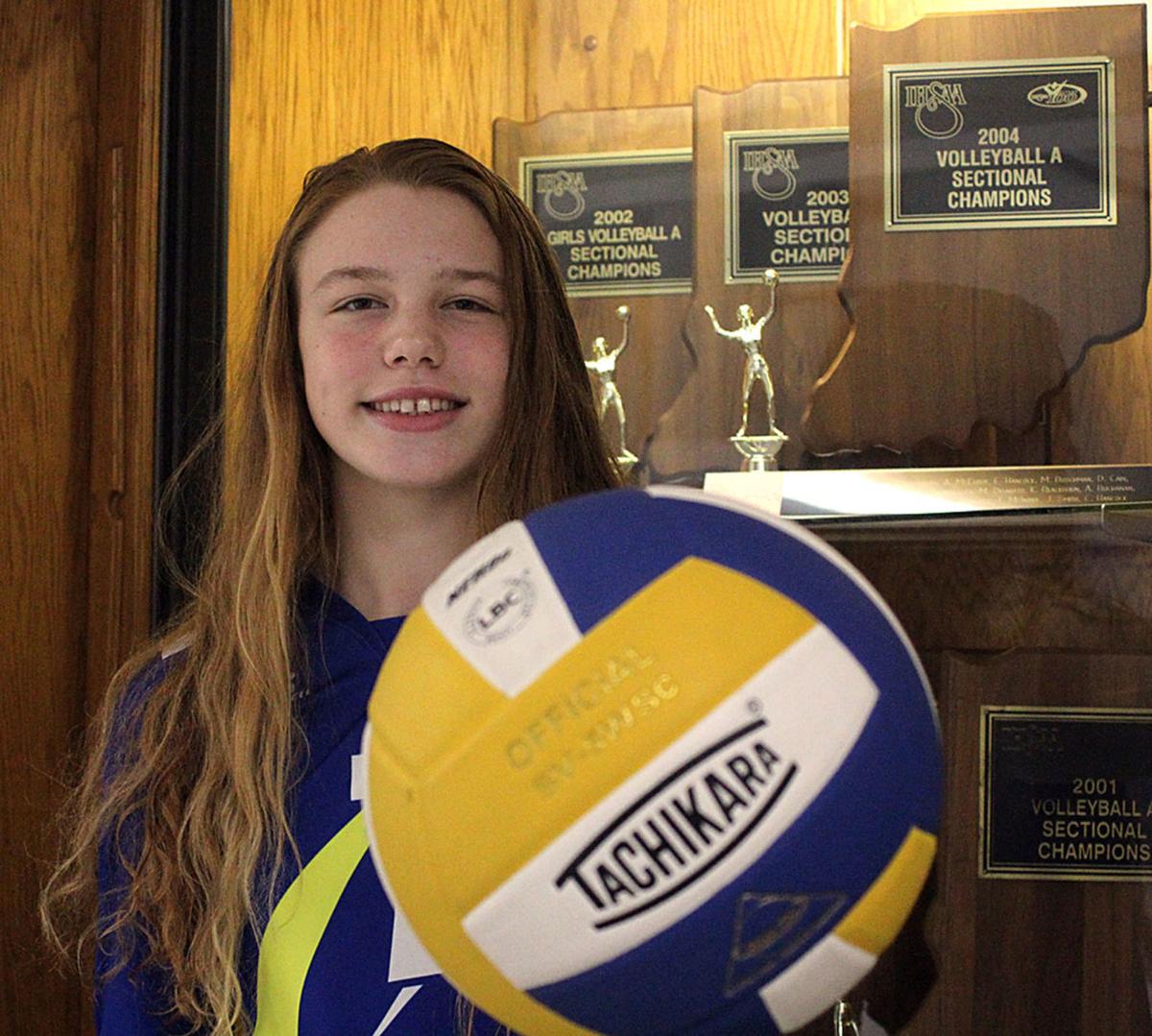 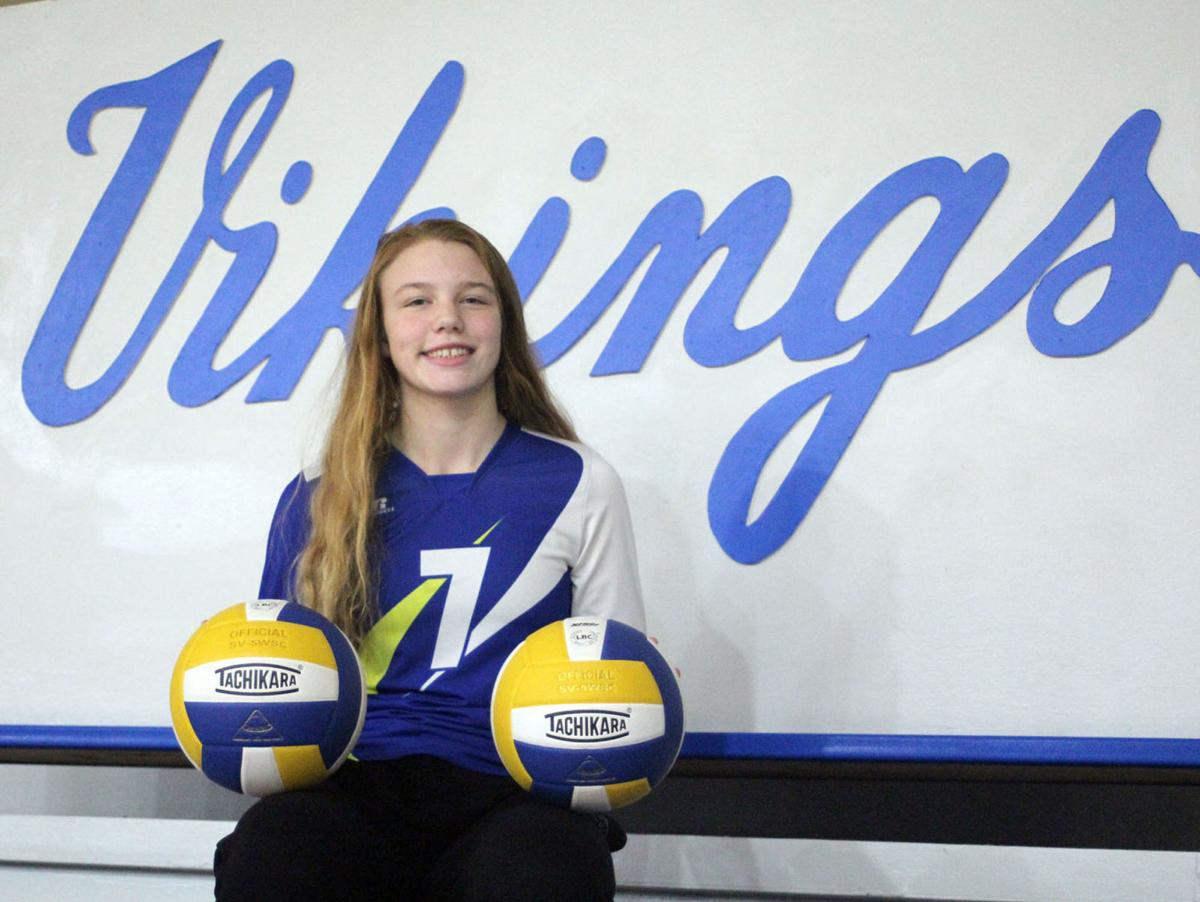 Lynzi Heimlich closed 2019 as an All-Midwest Conference first teamer with 331 kills, 196 solo blocks, 294 assists and 178 digs and helped her team do a decent amount of winning this past season. The Vikings (16-14) were above .500 for the second consecutive year and reached their first sectional championship match since 2016.

Every so often there is a smile.

Once in a while, a laugh escapes — rather a giggle, in essence.

People around Lynzi Heimlich know she isn’t one to convey much emotion — if any at all. The adage leader by example was tailor-made for North White’s sophomore middle blocker/setter, who displays a Terminator-like demeanor on the court whether putting up a powerful kill, a block or celebrating at the end of a set.

“You don’t know if she’s having a good game, a bad game,” head coach Teresa McIntire said of Heimlich. “She never changes her emotion, and I’m going to stop trying to get that to happen because she’s a kid that’s never going to do that. It works for us.”

Classmate Caitlyn Conn, however, swears she saw a change as the Vikings season progressed. Especially during the Tri-County Sectional championship match.

“At first she was really quiet and seemed like she didn’t want praise. But toward the end — like the championship game of sectionals, she was really high with her emotions,” Conn said. “She got excited, a lot. It just brought everybody else up, too. It did.”

For her part, Heimlich knows the chatter — and plays nice with it, which only adds to the intrigue. She adds confidence in herself and team allows her to keep calm.

“If we’re down, I know we can get back (into it) if we try our hardest and play well. So I don’t get too down,” Heimlich said. “I like to win as a team, not winning for myself. Winning for our school, too.”

Heimlich helped her team do a decent amount of winning this past season. The Vikings (16-14) were above .500 for the second consecutive year and reached their first sectional championship match since 2016. For that effort, among other items, Heimlich was voted White County Player of the Year.

“Lynzi, I think, has progressed from freshman to sophomore year tremendously as a player,” South Newton head coach Laura Robbins said. “She was pretty timid as a freshman, I feel like, and this year I think her confidence has boosted up quite a bit.

“She has a ton of potential … being a coach that’s going to have to coach against her for the next two years is pretty scary.”

Robbins has already endured two years of trying to gameplan against Hemilich, who closed 2019 as an All-Midwest Conference first teamer with 331 kills, 196 solo blocks, 294 assists and 178 digs.

“Probably my hitting,” Heimlich said of her biggest improvement. “Last year, I didn’t think I was as strong, and I got more confident this year.”

Makes sense — she more than doubled her freshman year output of 158 kills. Granted, the Vikings lost one of their best career players to graduation. But other teams also figured she’d be the focal point of the offense and still had issues stopping her.

“Just becoming more confident, knowing I can hit it to the floor when I need to,” she added of her progression. “After the first couple matches, I realized I could (put the ball where I wanted), and kept going.”

Rehab from a basketball-related ACL injury was a driving force, but she didn’t miss a step — pun intended — as volleyball season opened. The coach also attributed Heimlich’s ascendance to the team’s improvement as the season transpired. Heimlich had a part in it as a six-spot rotation player.

“When she’s challenged, she will go out and make the plays,” McIntire said. “That’s just as much of a leadership role … as going out and being the cheerleader of the team. She had to get used to that; I don’t know that she was really ready for that yet. But when I told her, ‘You have to go out and make a play,’ she’d make the play.

“And you don’t really realize how well she has done until you look at the stats.”

“Getting the block,” is what she likes most about the sport. “I just like to be able to jump up and get it down to the floor. Put it back. Sometimes I don’t even know I’m doing it. I just put my hands up and the ball goes back down.”

Added Robbins, “She’s a beast as a blocker, and that’s pretty evident. You do your best to move so that you make the middle blocker move. Quicker sets, higher sets, things like that.”

One figures a 5-10 player would excel as a middle blocker and hitter. But there was a wrinkle McIntire threw in that seems astounding — essentially, why don’t you try setting, as well?

Heimlich’s response in two seasons is 611 assists. She was ranked 40th in Class A this season with 294, with an estimated 40 percent or so coming from whatever back-row spot she occupied. Conn and Robbins both noted another reason Heimlich started setting — teams always want the ball in their best player’s hands.

“The ball is always going through her,” Robbins said. “Your best player is the one you want the ball to move through, and that’s Lynzi. She’s pretty versatile on the court.”

And McIntire dropped this bomb: “If she wasn’t so good as a hitter and blocker, we’d probably be running a 5-1 with her as setter. But there’s no way we can do that. She’s just an athlete, and she picks up on things and goes with it.”

Heimlich noted of the position, “It’s not always been my favorite. … I like to do it, sometimes,” which provides a glimpse into her emotional pool. She also quiets down when talking about her ACL injury — not in demeanor, just in vocal range.

“Coming back, I knew I would have to work hard and get stronger and I just — it pushed me because I wanted to come back strong,” she said. “I just like playing with everyone and doing good things.”

Snow this morning will change to rain showers this afternoon. Temps nearly steady in the mid 30s. Winds SSE at 5 to 10 mph. Chance of precip 90%.