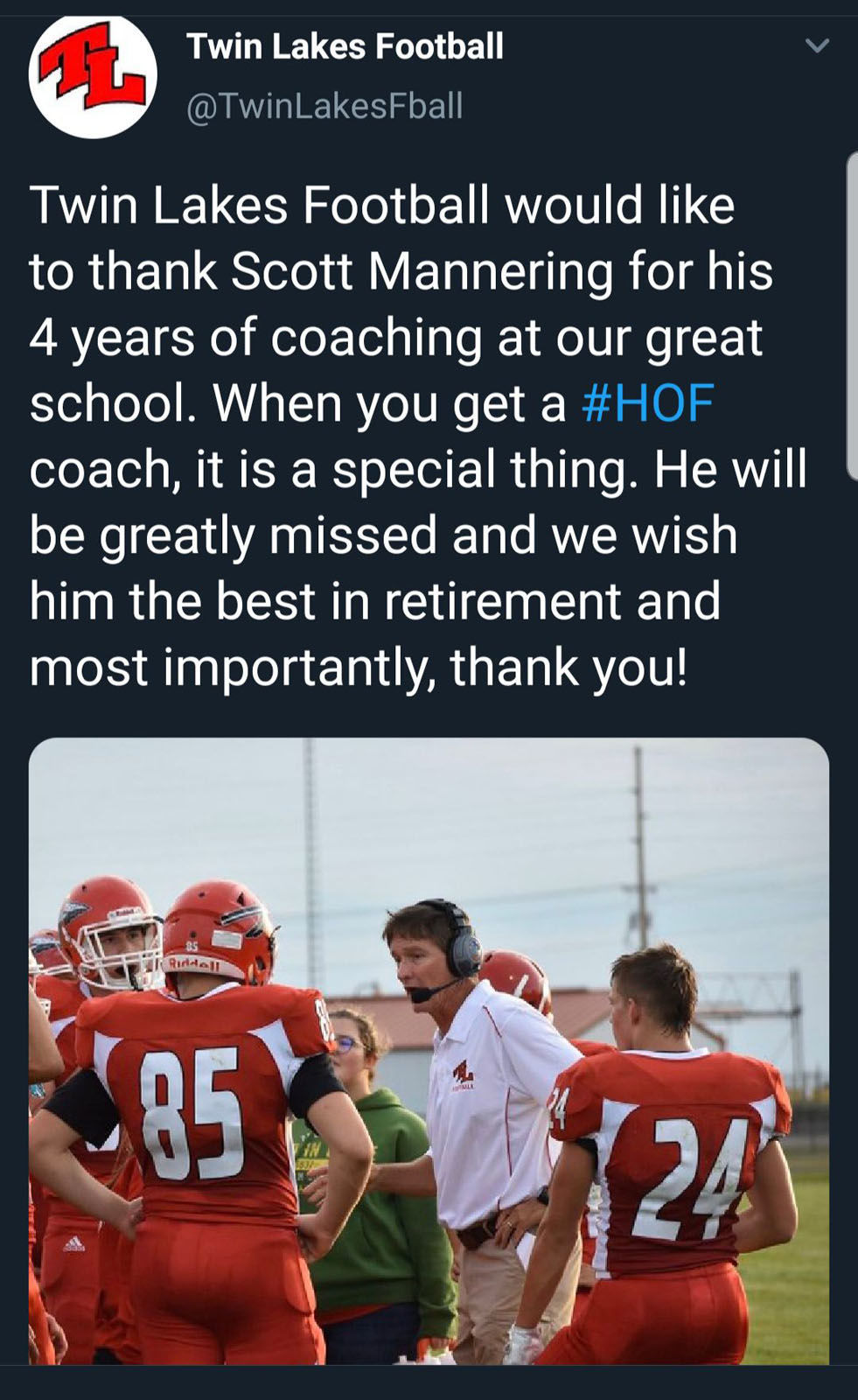 “He coached and taught the fundamentals of football and life to his players and students. He was a great role model in that regard — he practiced what he preached.”

“I’ll never forget the time Coach Mannering dapped me up like a homie during a summer practice. He made everything very fun and he will be very missed at Twin Lakes.”

“I love and respect Coach for everything he has done for not only the football team, but the kids himself.”

“Coach Mannering was great man and coach. He was phenomenal role model for all us.”

“I have to thank Coach Mannering for believing in me as a scrawny, 130-pound freshman all the way up through my senior season. I will miss his Thursday night pre-game talks and jokes. I will also miss his Friday night pre-game speeches and prayer.”

“I am happy for coach Mannering after a long, successful career. Although I am sad to see him go I am thankful for what he has done in his four years here at Twin Lakes.”

“Twin Lakes football would like to thank Scott Mannering for his 4 years of coaching at our great school,” read a statement from the Twin Lakes’ football Twitter account. “When you get a #HOF coach, it is a special thing. He will be greatly missed and we wish him the best in retirement.”

His final record was 241-135. Attempts to reach Mannering were unsuccessful as of press time.

“He was the consummate professional in all that he did,” Twin Lakes Athletic Director Kent Adams said Tuesday. “He was an excellent classroom teacher, which you would expect because he was an extremely detailed and organized football coach. Nothing was left to chance.”

Mannering guided Cass to the 2008 2A state title game, where it lost 17-14 to Heritage Christian. From 2003-2008, Cass won at least 10 games each season, compiling a 67-10 record with four semi-state appearances. Prior to his second season with the Indians, Mannering was inducted into the Indiana Football Hall of Fame.

“It’s pretty neat. It’s something you don’t really think about that will ever happen and when it does, the special thing I guess is you’re nominated and approved by your peers in your profession, which it’s just kind of a cool thing,” Mannering told the Kokomo Tribune in July 2017. “And the fact that I’ve been able to stay in it as long as I have with so many kids who have played with me and coaches who have come and gone, it just makes it really special. It’s a tremendous honor for me.”

Adams selected Mannering to lead the program in April 2016, and told the Herald Journal at the time, “Mannering’s ability to teach his athletes life lessons was even more important” than his record and success.

“We were looking for a guy who had experience in being a leader of young men in a positive manner,” Adams added.

“Coach was a man that you could always count on if you needed a reference, letter of recommendation, anything,” wide receiver Dylan Farmer said Monday. “He always had the best jokes if you were upset about something, he always made sure that you knew you mattered not only on the football team, but life in general, and he always made sure that he got the best out of us.”

Added Hunter Coble, “Coach Mannering was so much more than just a football coach. Coach helped me become more of a man outside of the game of football.”

Mannering was the freshman physical education teacher for the current senior class, and shepherded it through the program and high school.

“I’m happy for him and thankful for every story he has told us after our Thursday practices because they really change your perspective on life, and he’s taught me some valuable lessons I’ll never forget,” guard and linebacker Kaleb Roth said. “I’m apologetic for next year’s seniors because it is a very unfortunate thing to lose the coach you’ve had every year up until your senior year. It’s sad to know that coach Mannering’s wisdom will no longer be passed on after the next few classes are gone.”

The Indians reached the Section 28 championship in 2016 despite going 4-8 overall, and scored 83 points in their three playoff games. For the first three seasons under Mannering, Twin Lakes ran into fellow Hoosier Conference buzzsaw in West Lafayette at some point in the sectional — in the second round (2017-18) or title game (2016).

Twin Lakes lost to Knox, 36-7, in Section 25’s second round this season. The Indians went 5-4 in the playoffs under Mannering.

“He taught us hard work by pushing us harder and harder even during the offseason,” quarterback Danny Bennett said after throwing for more than 1,000 yards and 18 touchdowns in Mannering’s Wing-T system. “I’m glad I got to spend my football career under Coach Mannering. … I just hope I can express my gratitude to him for giving a short, stocky transfer from Illinois a chance to be a quarterback like I always dreamed to be.”

Much of the 2018 production came from now-Olivet Nazarene running back Zion Cosgray (1,267 yards, 12 touchdowns in two varsity seasons) and Kaleb Cauble (1,182 yards, 15 touchdowns in three seasons).

“He was a team player in terms of supporting the entire school and athletic department,” Adams said. “It is evident that these are reasons he head the success throughout his coaching career and ended up in the Hall of Fame.”

Adams will set up a search committee soon and had no other timeline or details are available at press time.

“He was the consummate professional in all that he did. He was an excellent classroom teacher, which you would expect because he was an extremely detailed and organized football coach. Nothing was left to chance.”

Cloudy with snow showers mainly during the morning. Some mixed winter precipitation possible. High 36F. Winds SSE at 5 to 10 mph. Chance of snow 40%.