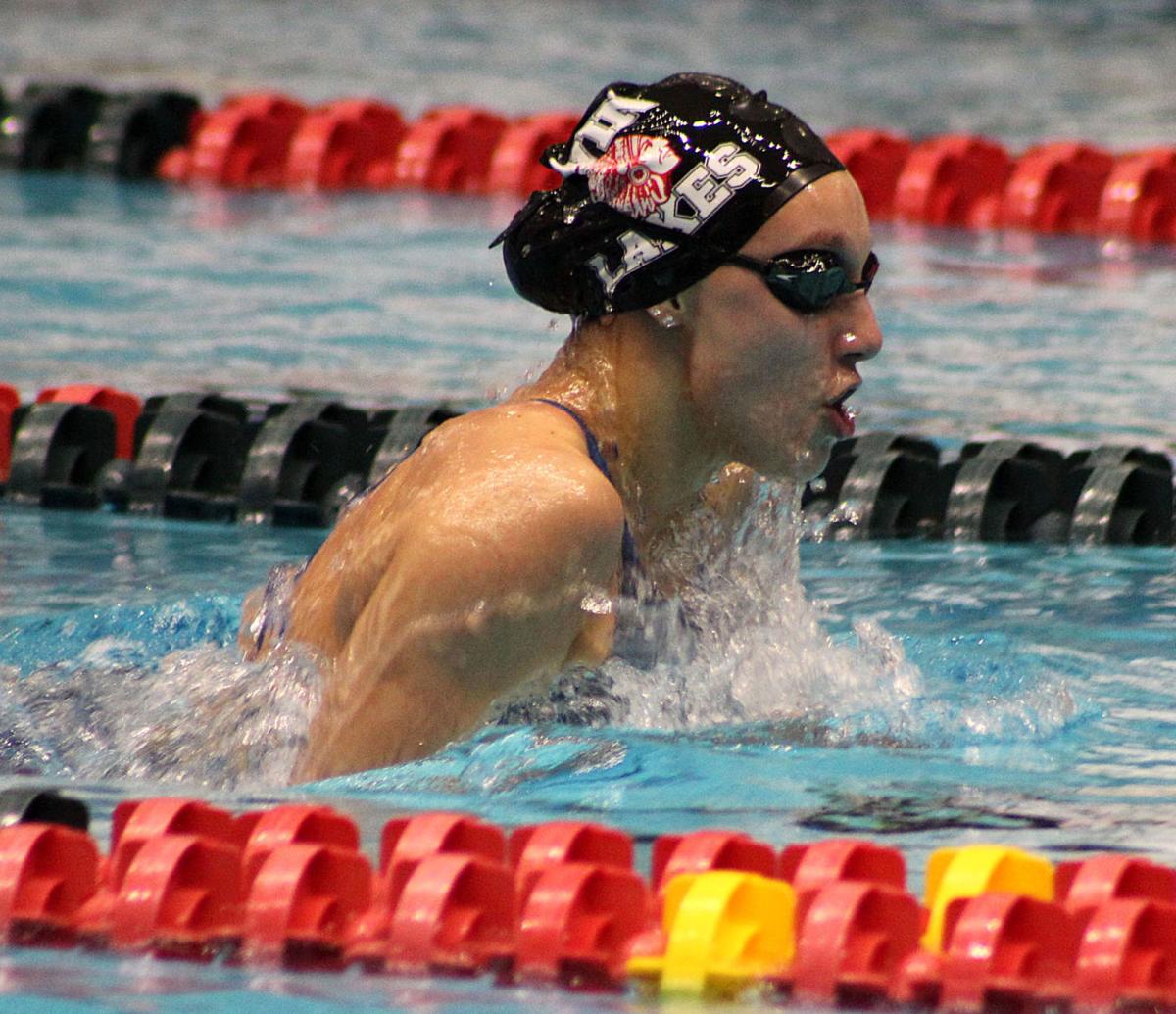 Twin Lakes' McKenzie Vogel swims her breaststroke leg of the 200-yard individual medley at the Indiana state swim meet Friday at the IUPUI Natatorium in Indianapolis. 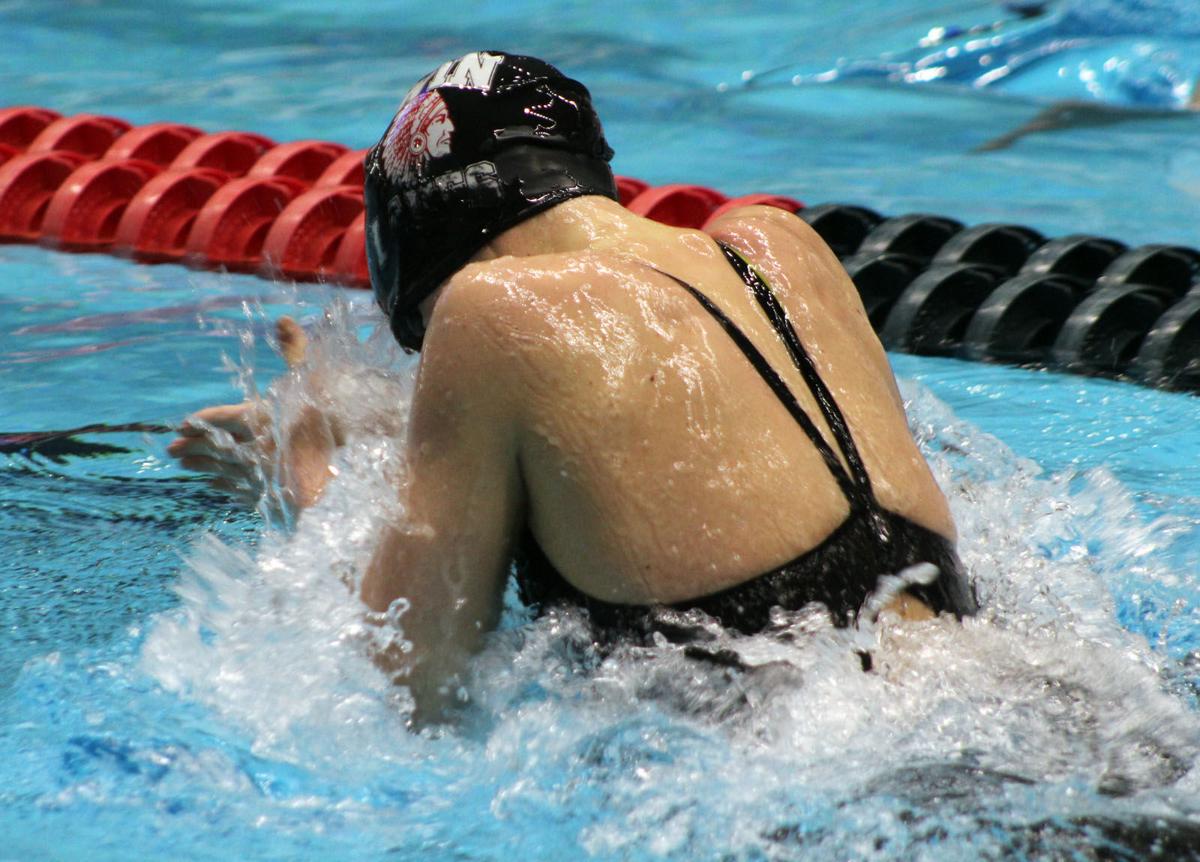 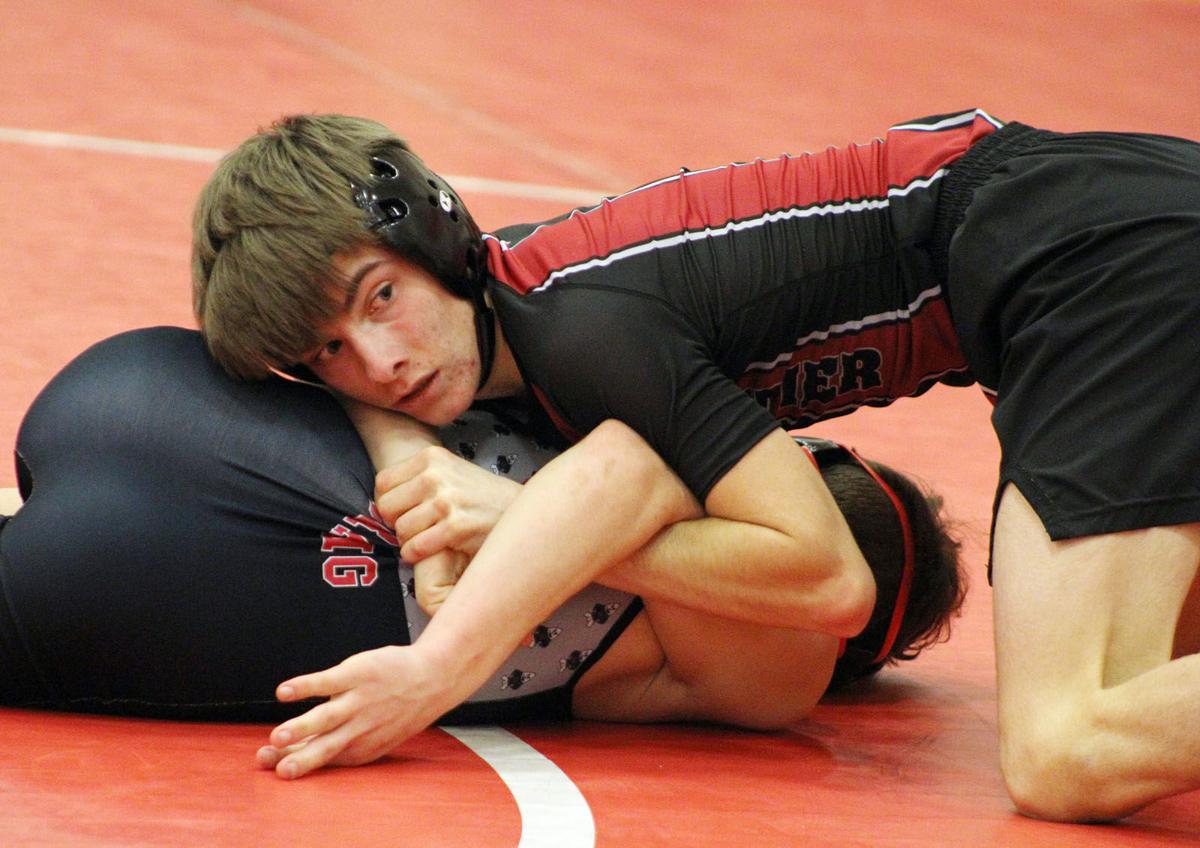 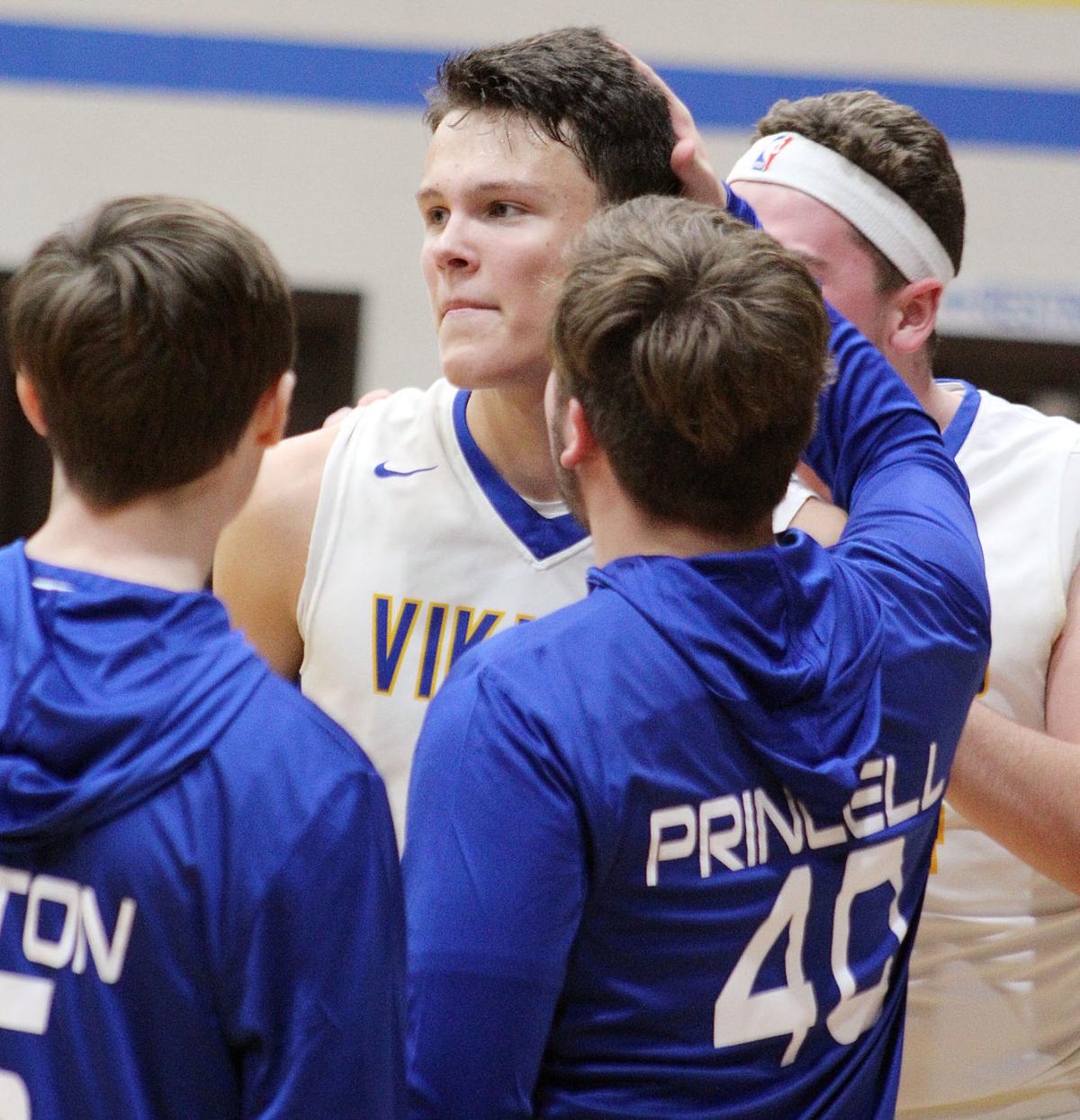 Teammates congratulate North White's Cale Robertson on breaking the 1,000-career point mark during a stoppage in play against Delphi on Saturday in Monon. 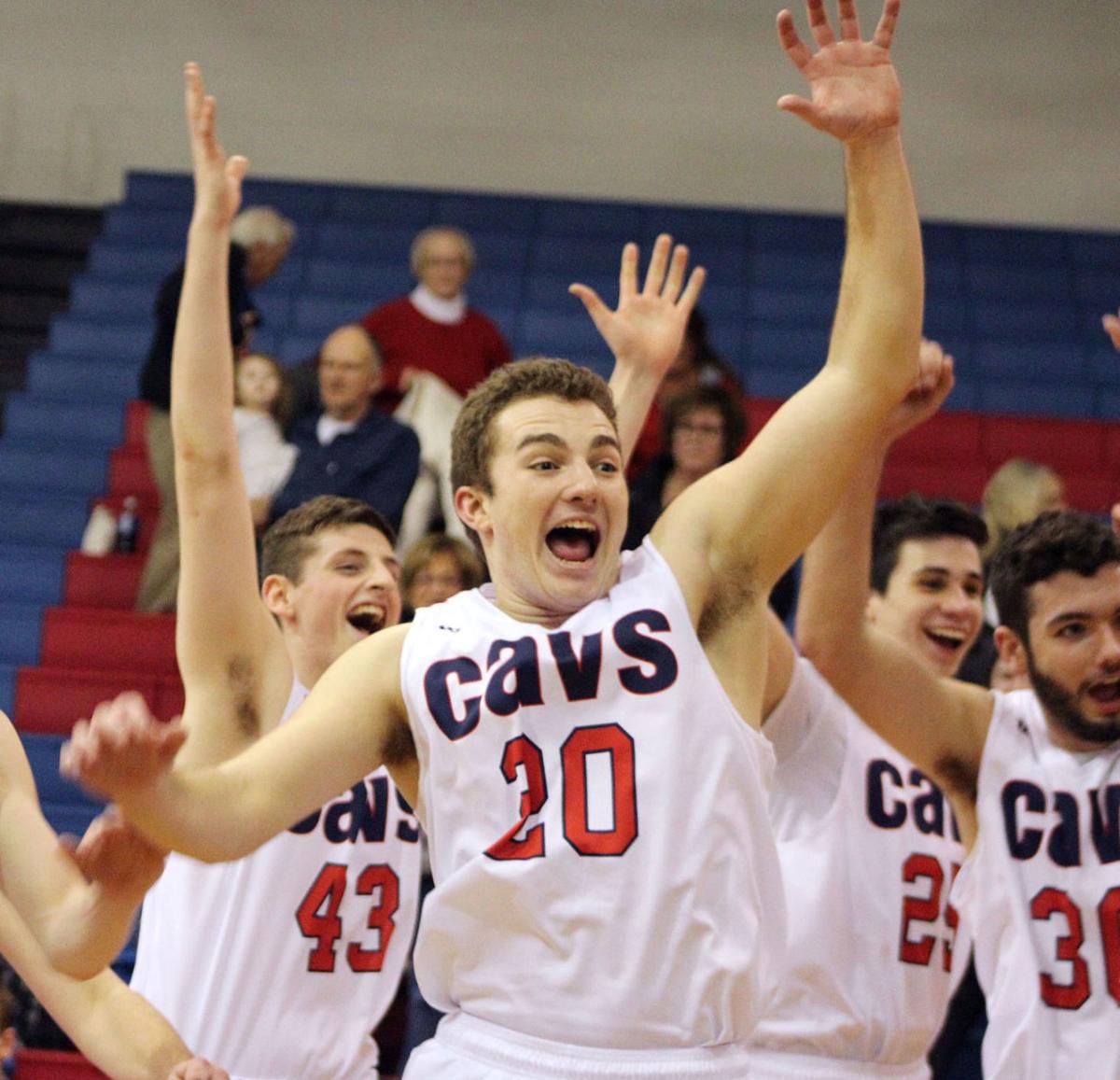 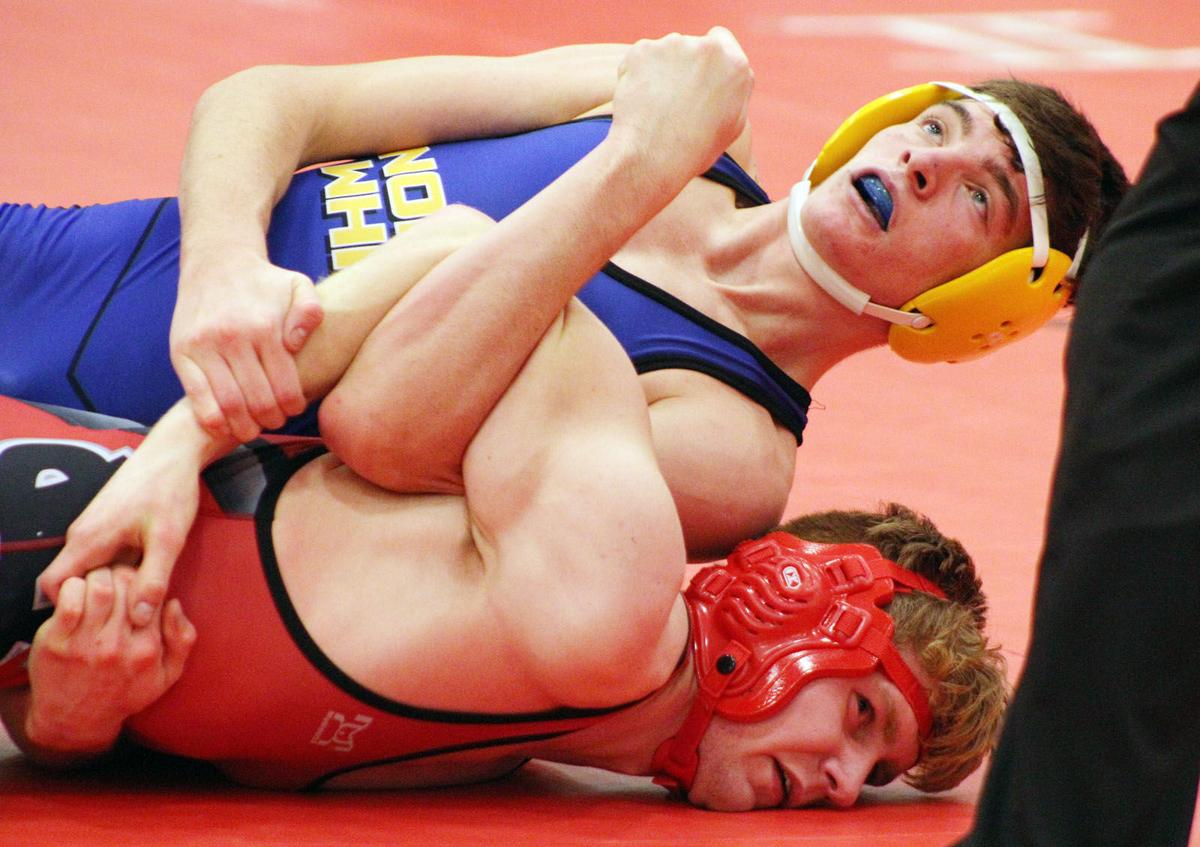 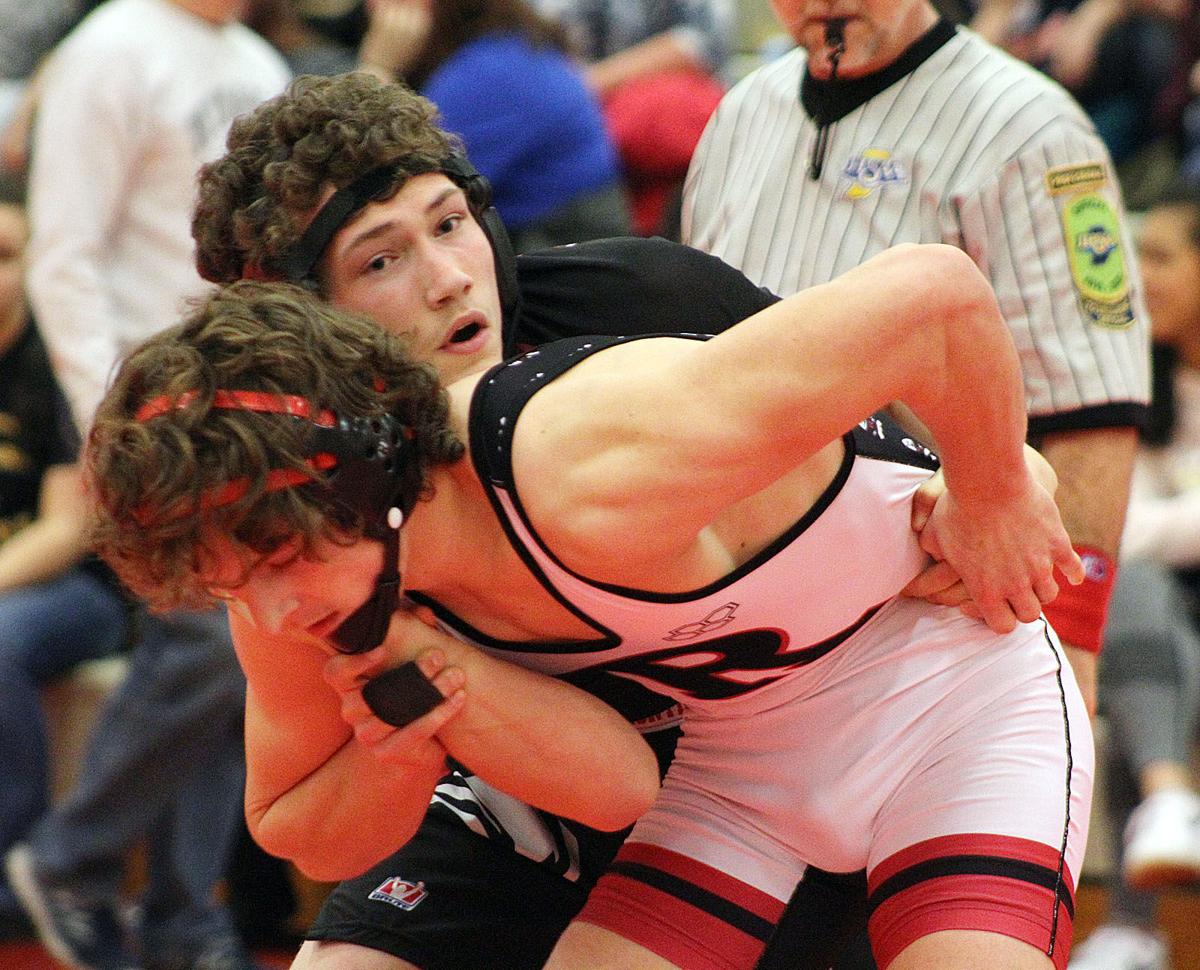 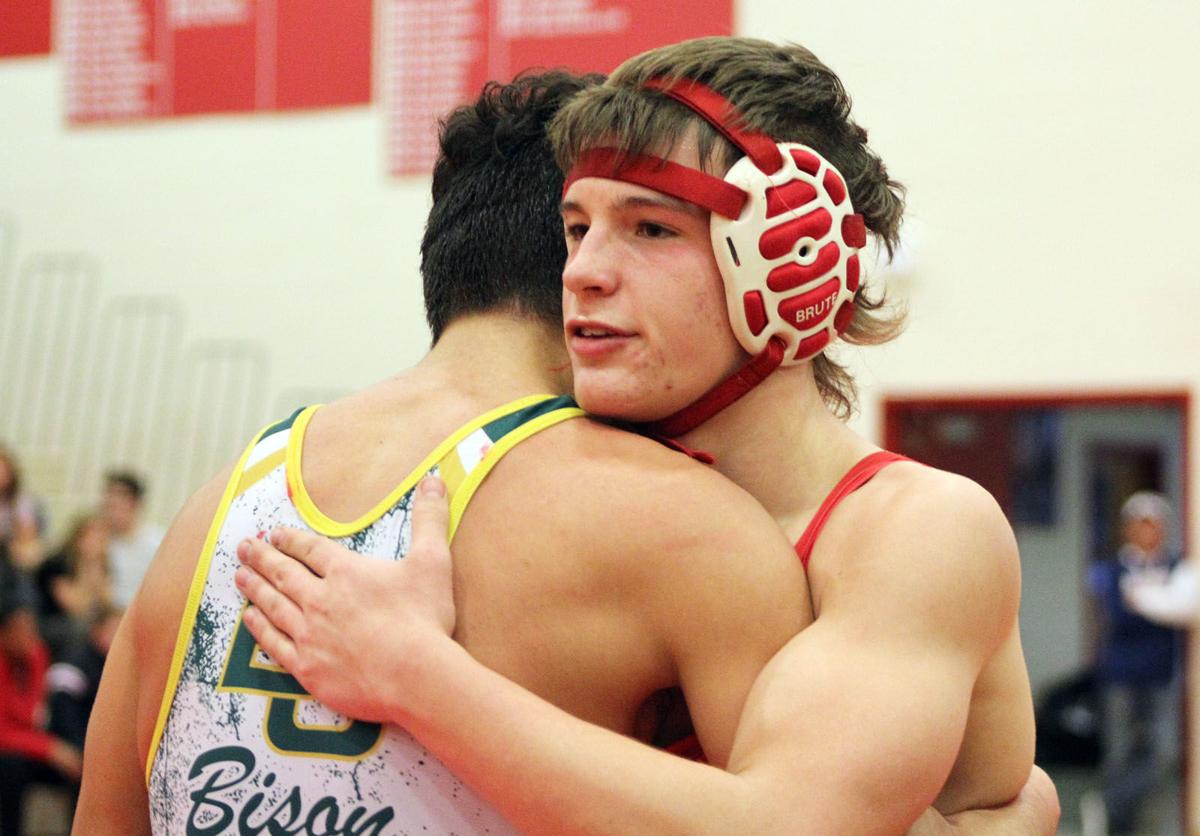 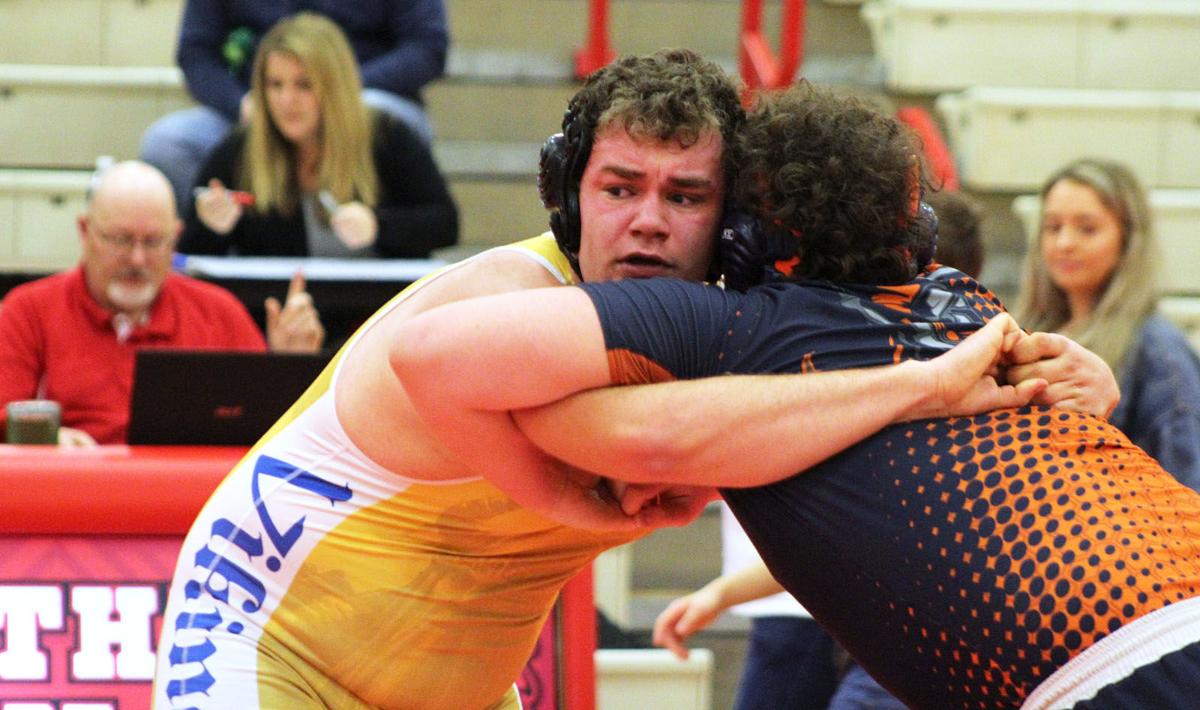 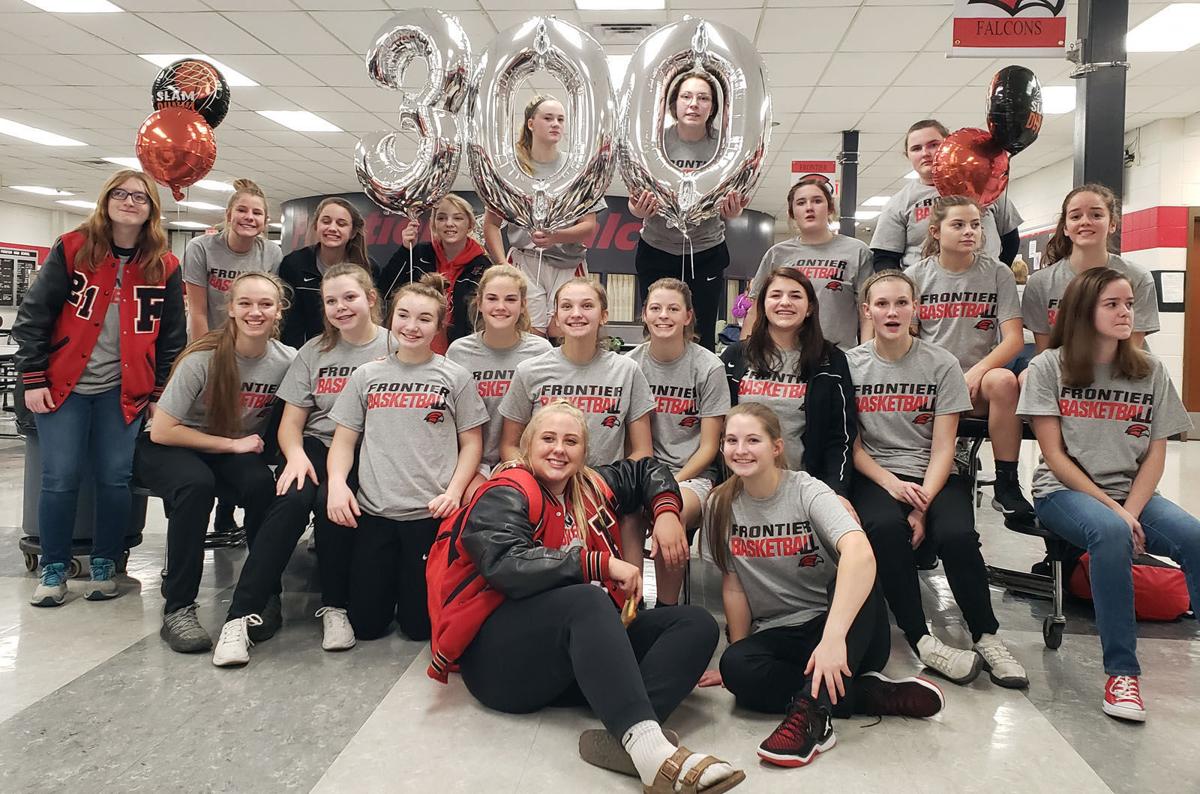 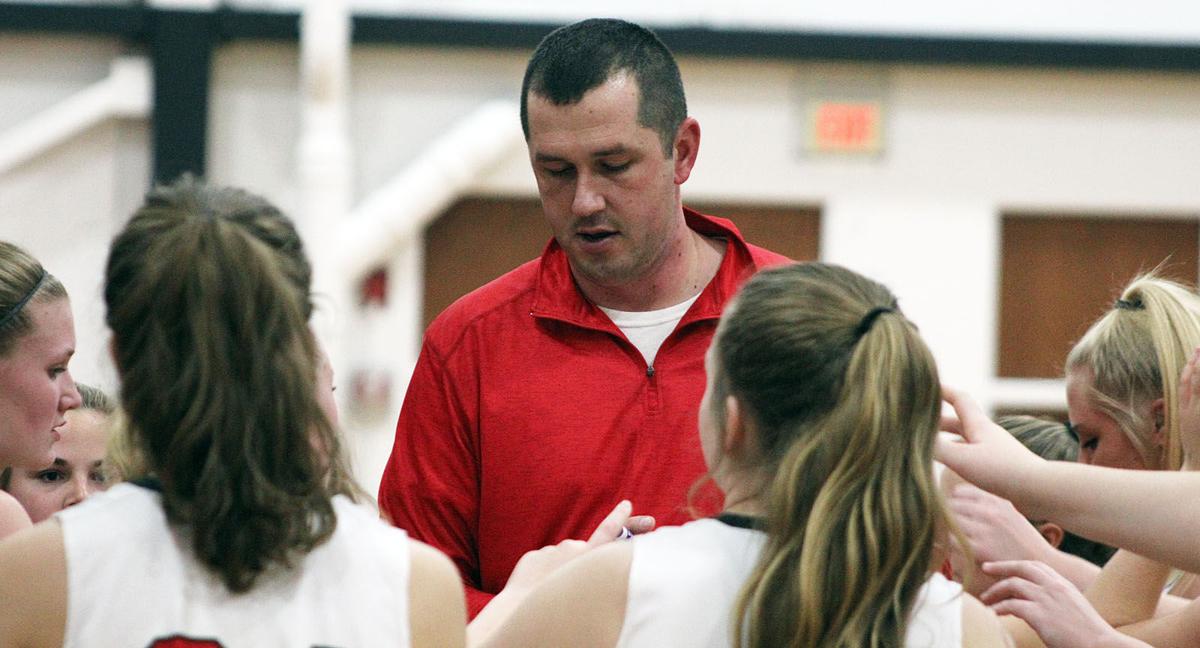 Frontier head coach Kyle Marlatt talks with his team during a Midwest Conference game against West Central on Tuesday in Chalmers. 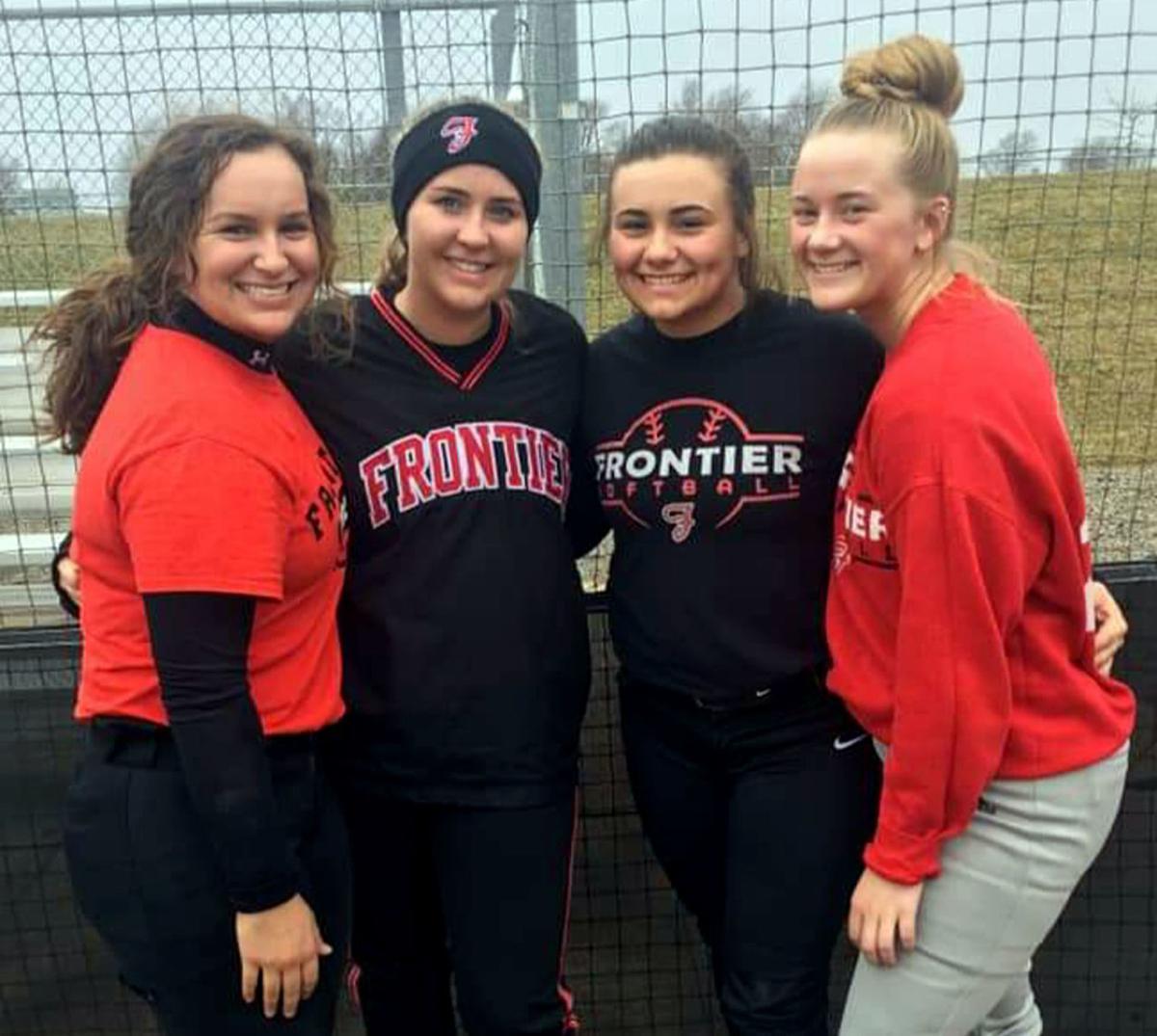 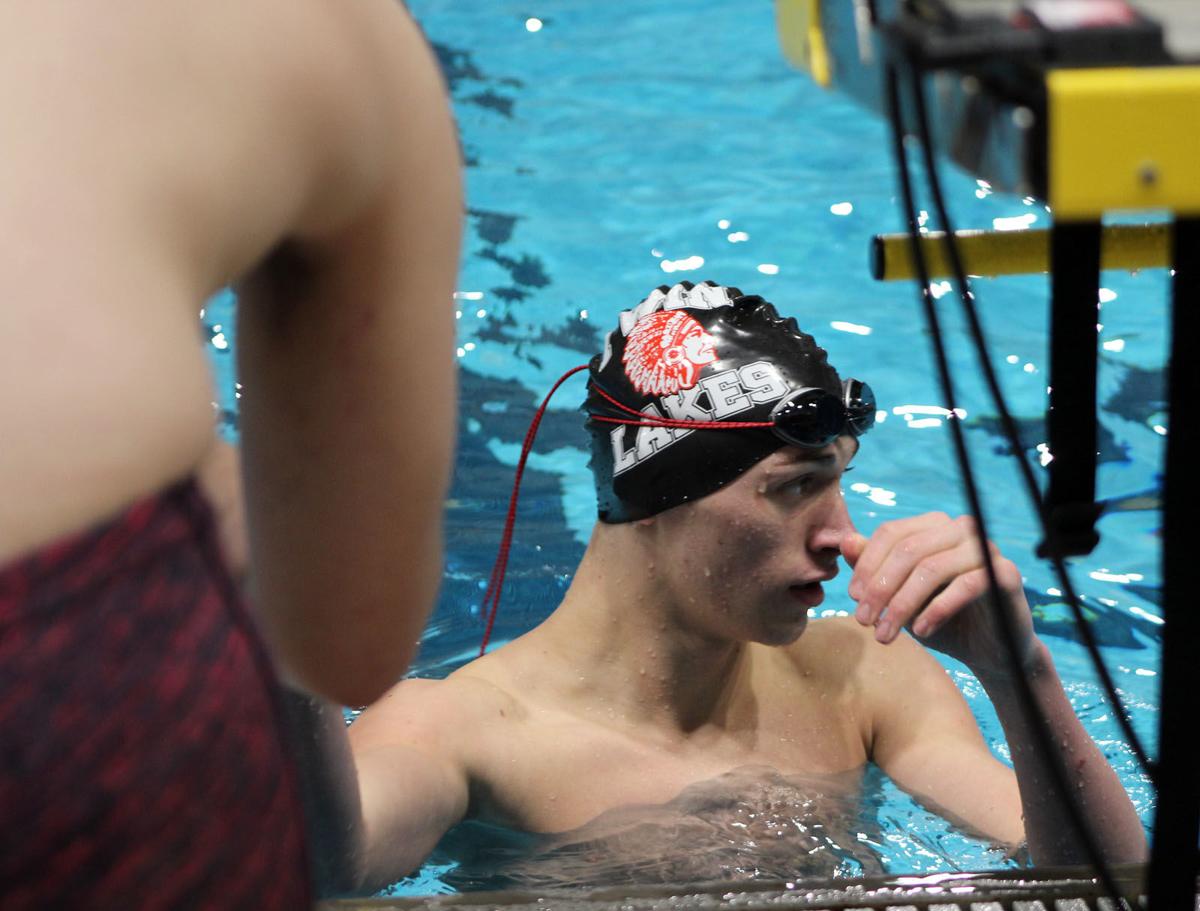 Twin Lakes' Aidan Totten reacts to placing third in the 50-yard freestyle during the Crawfordsville Sectional on Saturday in Crawfordsville.

Twin Lakes' McKenzie Vogel swims her breaststroke leg of the 200-yard individual medley at the Indiana state swim meet Friday at the IUPUI Natatorium in Indianapolis.

Teammates congratulate North White's Cale Robertson on breaking the 1,000-career point mark during a stoppage in play against Delphi on Saturday in Monon.

Frontier head coach Kyle Marlatt talks with his team during a Midwest Conference game against West Central on Tuesday in Chalmers.

Twin Lakes' Aidan Totten reacts to placing third in the 50-yard freestyle during the Crawfordsville Sectional on Saturday in Crawfordsville.

With sports in White County ground to a halt, the Herald Journal went back through the 2019-20 winter sports season — the final one completed before COVID-19 forced live extracurricular activities into submission — to select the top 10 sports moments of the season. Area high schools and youth sports programs all had their fare share of triumphant moments.

Herald Journal Sports Editor Gidal Kaiser compiled a list of more than a dozen accomplishments from the winter sports season, selected his favorite 10 moments and organized them based on seasonal and historical importance. A full top 10 list was cumulated. Here are the Top 10 Sports Moments of 2019.

Vogel ended her Crawfordsville Sectional career with a trio of automatic qualifying marks for the state swim meet, helping the 200-yard medley relay team set a school record (1 minute, 53.14 seconds). Vogel added school-record swims in the 100 backstroke (57.89) and the 200 individual medley (2:11.75) to complete her triumvirate.

It was the fourth consecutive year Vogel earned a sectional title and automatic state berth in each race.

“I wasn’t expecting her to break her own record again,” father and head coach Kerry Vogel said after the sectional. “It came as a complete surprise to me. And then she breaks her backstroke record … I think she was surprised there, too.”

Vogel broke her backstroke record again with a time of 57.53 at state, and placed 19th. It was her highest placement at state in the backstroke and eight individual state races, but also three places away from reaching Saturday’s B finals race.

“That’s the time I’ve been aiming for my entire life,” Vogel said the Sunday after state. “I wanted to end my career with a 57, and I didn’t think I’d be able to get it down this year. Breaking it twice and going a low 57 was more than I could ask for. It was a pretty great season I would say. Career, even.”

Mya and Ayanna Thompson were heading to state anyway as part of the 200 medley relay, but the sisters squared off in the 100 breaststroke final in Crawfordsville.

“I’m thinking I want to beat her, but also I’m thinking — I don’t know,” Ayanna said. “That race was just something I never …” “will experience again in my time swimming,” Mya cuts in.

“Holy cow we broke the record,” Ayanna said two days later. “(McKenzie and I) wanted that since we were freshmen.”

“I saw you guys jumping up and down, and I was like, ‘Whoa,’” said Macy Green, who swam the freestyle/anchor leg. “I took my goggles off and saw them jumping, then looked over and saw Kerry and it was all, ‘Whoa.’”

Simmons initially wasn’t into wrestling, but made a deal with classmate and friend Jac Sproles before their sophomore year — he’d wrestle if Sproles ran cross-country. As they sat together after their senior wrestling season, Sproles joked: “He definitely got the better end of the deal.”

Simmons was the lone White County wrestler to earn a victory at the East Chicago Semi-State meet. He extended Frontier’s streak of a semi-state victory to four, following Colin Reagan’s three-year run.

“I don’t want to say I’m surprised, but I didn’t exactly expect myself to get as far as I did,” Simmons said. “I’m just happy how it turned out.”

Simmons trailed Merrillville freshman Lucas Clement by a point to start the third period, but scored five in the final 58 seconds to cement a 15-10 win.

“Just keep fighting,” Simmons recalled of his mindset. “It’s who has the bigger gas tank. Eventually, one of you is going to give out.”

Robertson entered the Feb. 21 game against West Central four points behind Luke Diener’s 1,310 points. A pair of putbacks in a 44-second span knotted the mark while also giving the team a 7-0 advantage.

The senior drained the first to break Diener’s record as a roar went up from the student section. Robertson smiled, waved and went back to the line before a buzzer went off and the game was stopped.

Diener came out of the stands to salute Robertson.

“When we were warming up, I saw him walk in,” Robertson said. “I thought, ‘Oh, man. He’s here to hand me the ball.’ That was really cool.”

Robertson ended his career with 1,402 points.

“It was a big night,” senior Chase Connell said. “A lot of things seemed like it could have been a lot of pressure added on.”

“I think our goal was to go out and just have fun,” added classmate Trey Cobb. “It was our last home game, and we just tried to have fun.”

“At the beginning of the year, that was the goal we had,” Zach Gretencord said. “For us to reel that back in after we’d pushed it to the backburner, for us to come back and win it out … we took care of business.”

Added Justin Cree, “We had a long journey this year. To come out here and beat a well-coached North Newton team for this, man there’s nothing like it.”

Ball followed up a 170-pound Twin Lakes sectional championship with a runner-up spot at the Logansport Regional. He picked up an 11-0 major decision in the opening round to secure his semi-state spot, then earned a semifinal pin before losing in the championship.

“Anthony did what we thought — if he wrestled well, he could get himself in the finals,” head coach Kirk Quasebarth said.

A six-point second period gave Wendling a big lead in his opening match, which he held on to win 10-4 and secure his first semi-state berth. He lost his next two matches to place fourth.

Clevenger also clinched his first semi-state berth when he turned a second-period takedown into a pin at 2 minutes, 48 seconds. He lost his next two matches to place fourth.

Pulliam matched up with Benton Central’s Henacie Zamora in the 152-pound championship, and led 4-2 late in the third when Zamora scored a takedown with 10 seconds left. In the extra period, Pulliam scored a takedown and ended up pinning Zamora in 6:41.

“We’re equally matched, and obviously it went into overtime,” Pulliam said. “Going into the final match, it was give it all I had to better my seed for regional.”

Dillon picked up a pin, and 8-0 major decision and a 5-0 decision in the title match. Against North Newton’s Matt Barry, he scored five points in the first two periods and rode Berry out in the third.

We had a rough year but made a good comeback towards the end and gave our best at sectionals,” Dillon said.

None of it mattered on Dec. 17 as players dined on pizza and cookies after securing program win No. 300 after beating West Central, 55-38.

The win provided its own kismet — the Trojans blew out the Falcons a season prior by 45 points. Frontier reached .500 for the fifth time at 6-6 before losing the rest of its slate (6-17).

“It’s been on our minds since the beginning of the season,” senior guard Hannah Simmons said. “We don’t just want to improve this season. We want to improve Frontier basketball as a whole.”

“We want to create a good image of Frontier basketball so they can come in and keep building the program once we’re gone,” senior Abbie Carter said. “It was special for us because we had a big crowd, with the band and the cheerleaders and all the little girls. All of that just motivated us.”

The Crossroads League becomes a long homecoming for Breanna Hines, Zoey Nantkes and Kyra Wilson the next four years.

“It should be fun,” Nantkes said after signing with the University of Saint Francis. “I feel like all of us wanted to (play college softball), and I think it’s really cool that it actually had happening.”

Nantkes signed with USF to pitch (13-4, 2.78 earned-run average, multiple saves, 133 strikeouts) and play in the field. She ended her prep career with a .452 batting average.

Wilson’s birthday present from Goshen College was a scholarship. The private, Christian-based liberal arts college “offered a lot of interesting things that fit me and my personality,” Wilson said.

Hines signed with Huntington University, drawn to it by its educational offering. Hines hit .486 in her career, with a career .509 on-base percentage and .750 slugging percentage.

The freshman had high expectations, and kept pushing toward the end.

Totten held the fourth-best seed time (23.54) in the 50 freestyle, but sped through the pool in 22.56 seconds to collect the top time into the finals. He was 0.31 seconds ahead of South Vermillion’s James Vitaniemi. He was also seeded third in the 100 freestyle after swimming it in 51.34 seconds, a drop of 2.3 seconds from his seed time.

“I dropped a half-second off the 50, and was over half a second faster than the other two,” Totten said. “Definitely feel confident about (the preliminaries). Very confident.”

He closed the sectional not with his first state berth, but placed third in the 50 (22.83) and fourth in the 100 (51.03). Totten took solace in the fact he got to choose the finals walkout song, and picked AC/DC’s Thunderstruck.