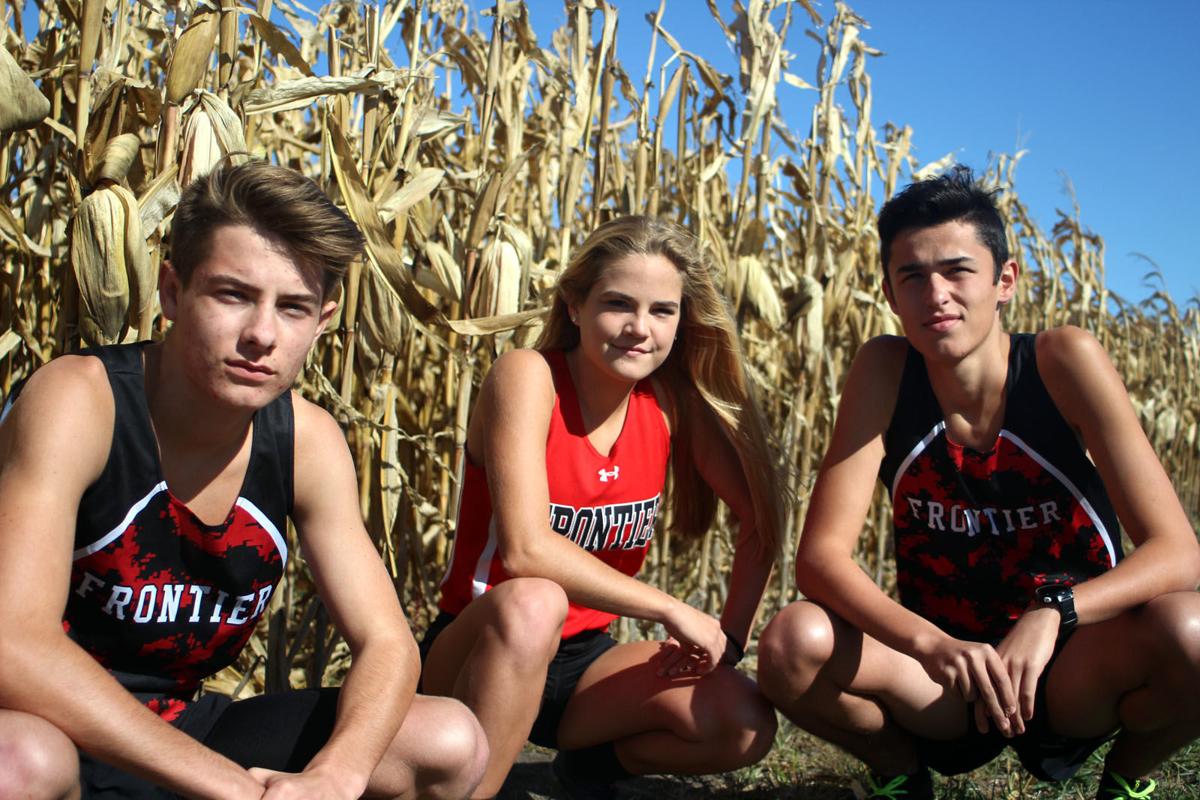 Frontier’s trio of Branden Simmons, left, Courtney Gutwein and Thomas Tullius, right, are the second consecutive trio of Falcons to reach the semi-state level. Simmons and Gutwein both ran at New Prairie last year; Tullius runs for the first time. 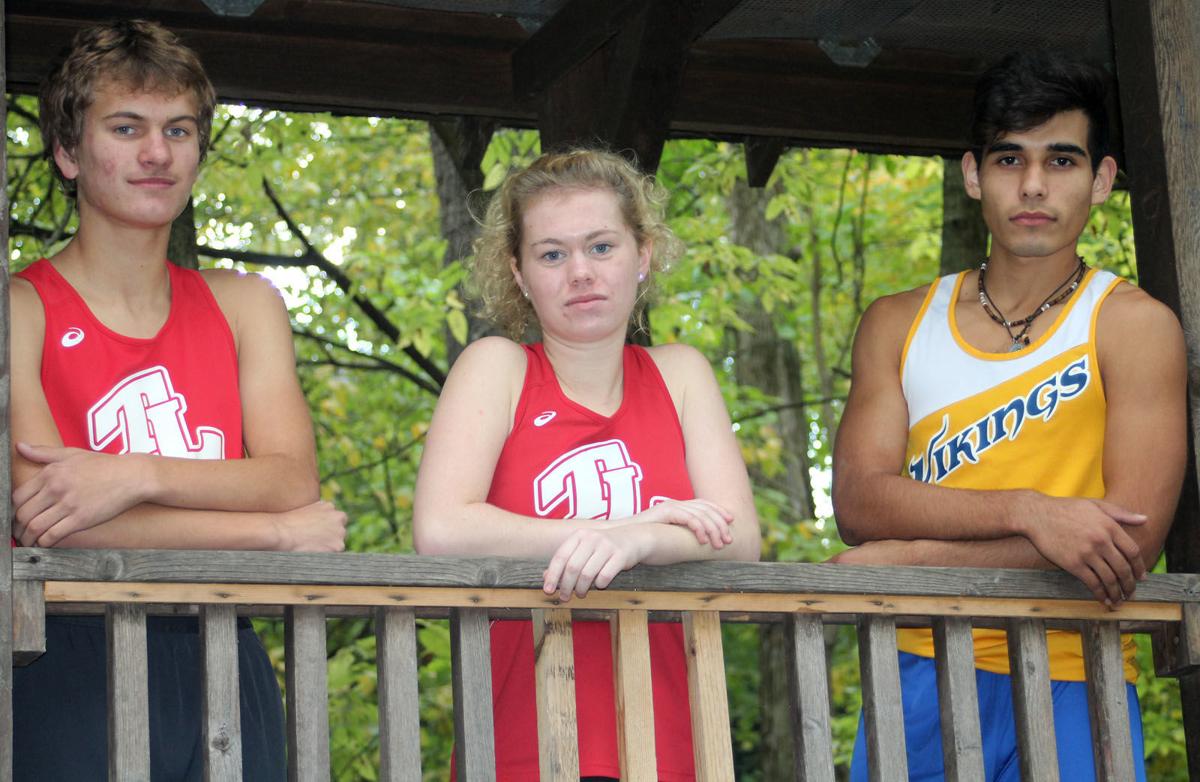 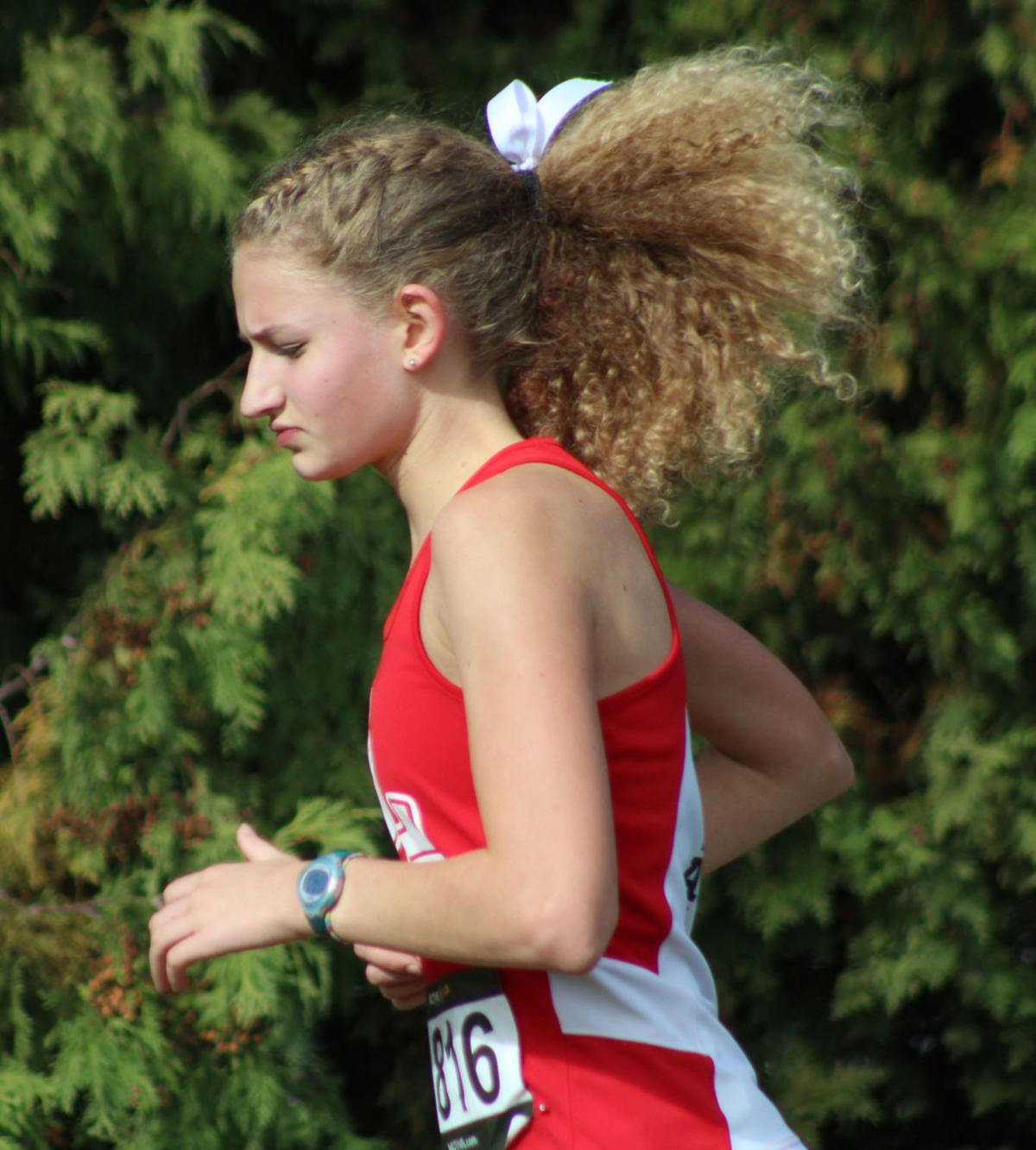 Twin Lakes’ Tess Lilly runs in the girls race during the Harrison Regional on Saturday hosted by Benton Central in Oxford.

Frontier’s trio of Branden Simmons, left, Courtney Gutwein and Thomas Tullius, right, are the second consecutive trio of Falcons to reach the semi-state level. Simmons and Gutwein both ran at New Prairie last year; Tullius runs for the first time.

Twin Lakes’ Tess Lilly runs in the girls race during the Harrison Regional on Saturday hosted by Benton Central in Oxford.

Speaking with a half-dozen White County cross-country runners reveals three truths, if not more, about semi-state week. Frontier and Twin Lakes will each send a trio — Courtney Gutwein, Branden Simmons and Thomas Tullius for the Falcons, and Kaylan Howard, Tess Lilly and Justin Scott for the Indians. North White’s Dominick Hernandez will also run this morning at New Prairie in Carlisle, the third first-year semi-state participant of the group.

Their overall attitude tempered somewhat from last Saturday’s discovery after the Benton Central Regional, when it was announced piecemeal in Oxford each was part of the next level’s field. Most expressed delight in the moment, the feeling a few days later was muted. It seemingly is an overarching part of the adage, ‘It’s not the destination. It’s the journey.’

“It’s just another meet, another week of practice. It just has the title of semi-state,” Hernandez said Tuesday after a portrait shoot alongside Howard and Scott. “I don’t know — I don’t really feel excited.”

Hernandez laughed as he said the last words.

“It’s another chance to see how well you can do,” he added.

“It kinda sucks having another week of practice,” he said. “It’s getting colder, man.”

When asked if there was something she could say to convince the first-timers of semi-state’s importance, Howard offered, “Yay, running,” while trying not to laugh too much.

The circumstance can be understood. Everyone is happy to move on — all seven expressed gratitude in that. But Simmons and Tullius summed it up Wednesday: As one reaches each level, they know it is just a set-up for the future.

Simmons was “super-excited” to reach the regional meet as a sophomore. He felt the same way when qualifying for the 2018 New Prairie semi-state meet. Tullius is as even-keeled as his older teammate, expressing the same sentiment.

“I already made it here, so let’s do it again and get farther,” according to Simmons, is their feeling. When it was pointed out to the senior it is his last season, he smirked.

Simmons has a teammate to run alongside this season, which was not the case last season. On the opposite side, Gutwein ran with Myah Krintz — “Not really, because (Krintz) was a lot faster than me, so I didn’t run with her anyway,” she joked — last year but is by herself this season. It denies her the opportunity of a teammate to pace with, but her biggest goal is to break 21 minutes, with the added hope of earning another personal-record time and setting herself up for a serious run at qualifying for state next year.

Her sentiment was equaled by the quintet of other non-seniors:

“I am going to use this race to kinda set myself up for next season; I’m hoping to get out there and run my best race,” Lilly said.

“I don’t see myself going to state this year,” Hernandez said. “The only thing I can do is make my time better. That’s all I can do to improve.”

“I probably won’t go to state, either,” Scott said. “It sets things up for the future; that’s about how I feel.”

“I’m hoping for the best race of my life after working this hard to get here,” Tullius said.

Howard said something similar. She’s the wily veteran, having reached semi-state all four seasons. This is the lone year she’s not running as part of a team — but third-year qualifier Lilly will be with her, perhaps every step of the way.

“I just wanted to go all four years, and I’m glad that I did,” she said. “I’m really proud of myself and really happy about it. Saturday is my last race, so I’m going to have to push myself.

Lilly noted Howard will push her Saturday, as the senior has done most of the year while serving as Twin Lakes’ lead runner. Simmons and Tullius will push each other as well, as has been the case all year.

The collective knows whom they’re facing via prior competition or reading psych sheets. Admittedly, chances are slim to advance. Simmons wants to, as a final step in his prep career. Howard will be happy with a good race, and everyone else is looking ahead already. All seven ran PRs at the regional, and know PRs are needed again to have a remote chance of qualifying for state.

“There was definitely a lot more stress last week than this week,” Gutwein said. “This is like the cherry on top, right? Unless some miracle happens.”

Periods of rain. Temps nearly steady in the mid to upper 30s. Winds ESE at 5 to 10 mph. Chance of rain 90%. Rainfall near a quarter of an inch.