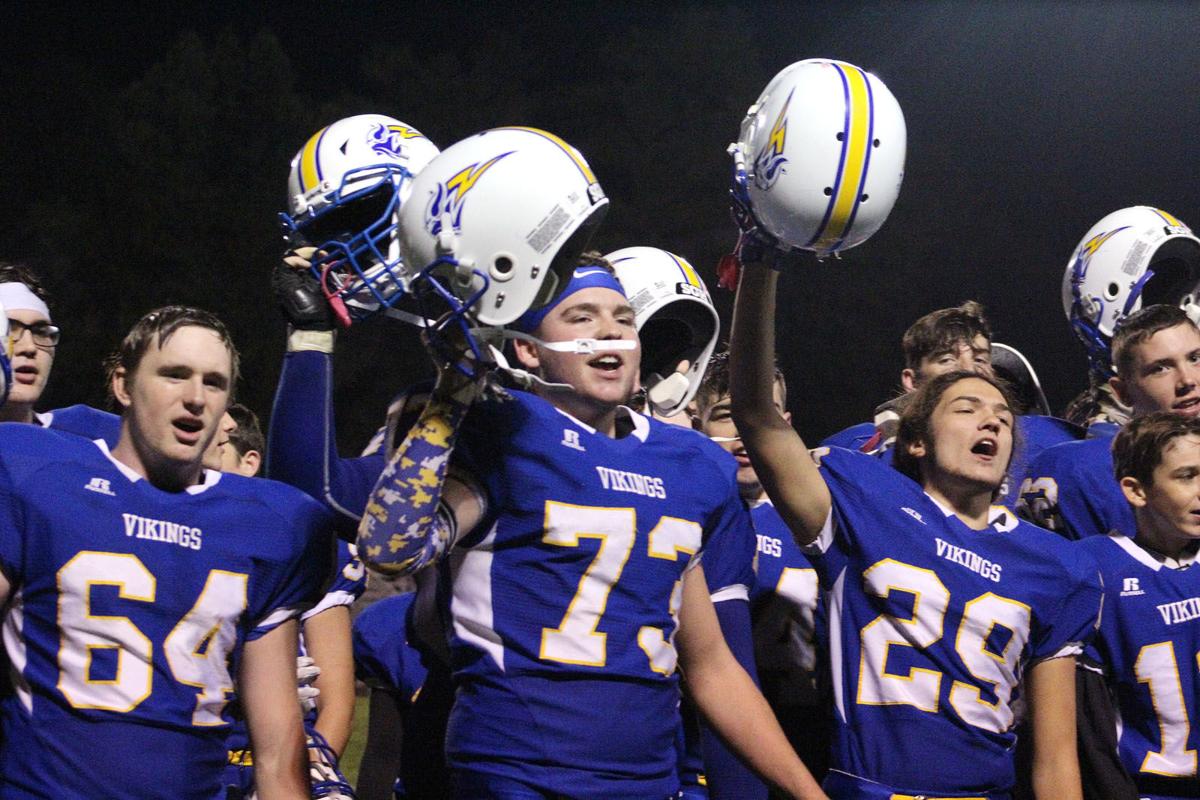 North White football players sing the school fight song after a 29-14 Class 1A Section 42 first-round playoff victory against Carroll on Friday in Monon. 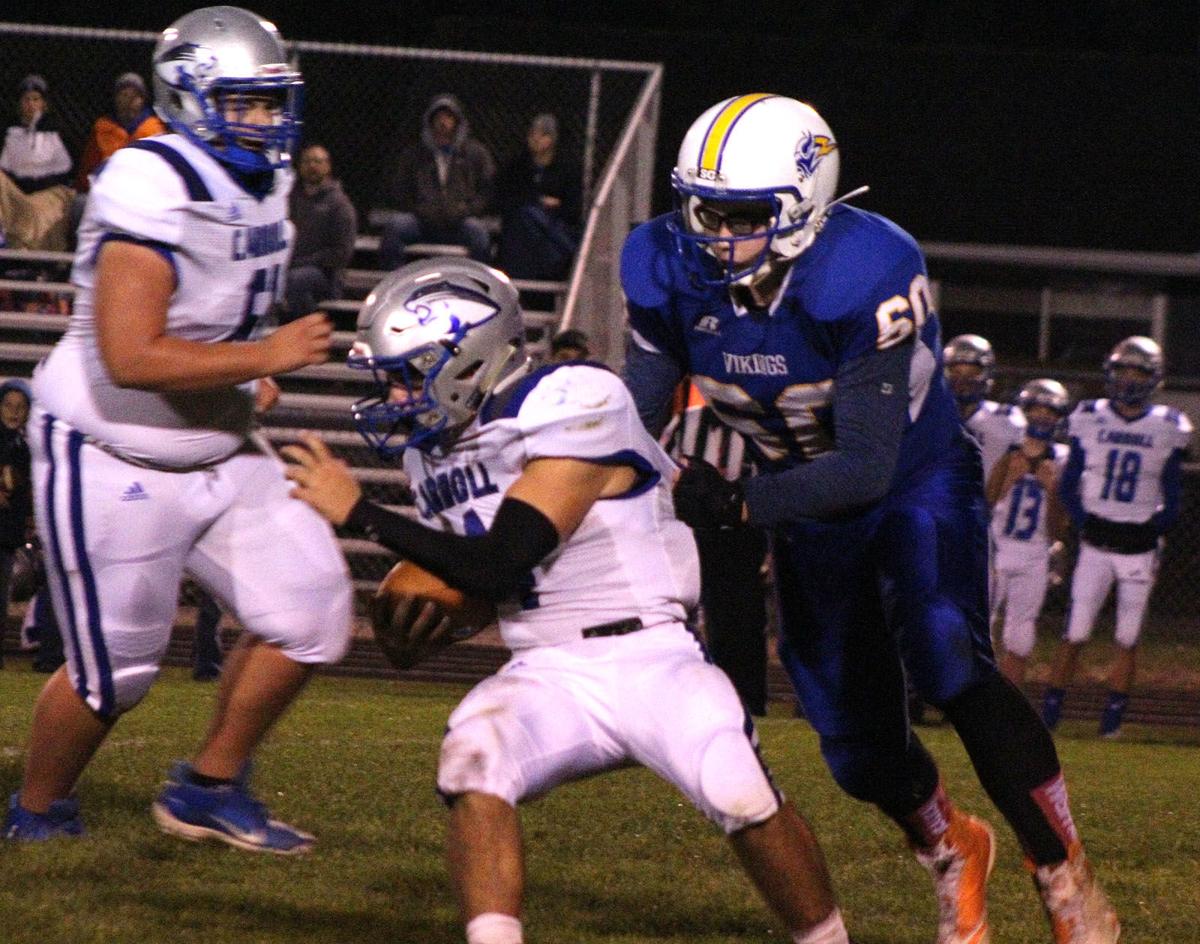 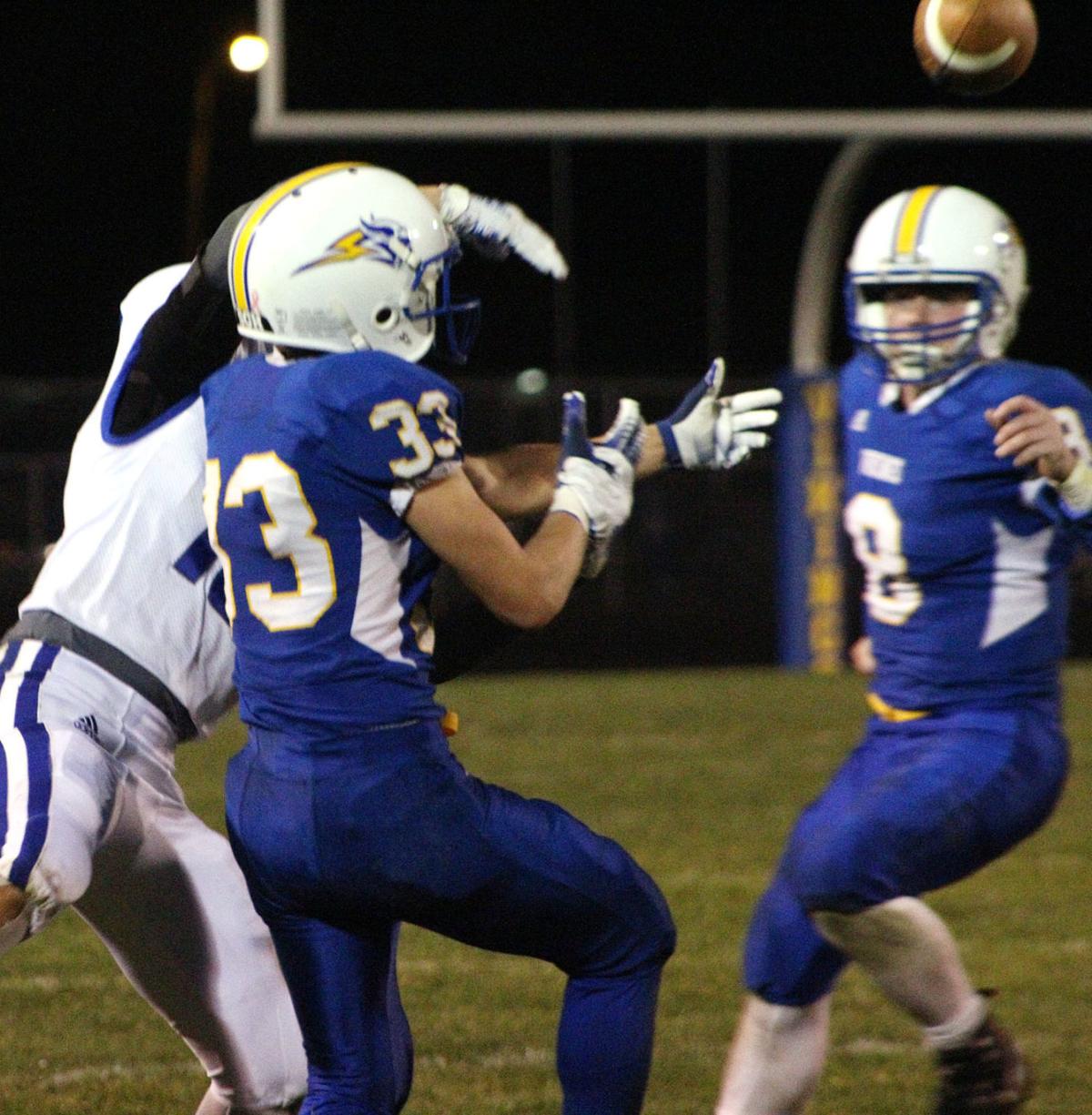 North White's Brayden Buschman tips a pass intended for a Carroll receiver in the air during their Class 1A Section 42 first-round playoff game Friday in Monon. The ball was intercepted; the Vikings picked off six passes in a 29-14 win.

North White football players sing the school fight song after a 29-14 Class 1A Section 42 first-round playoff victory against Carroll on Friday in Monon.

North White's Brayden Buschman tips a pass intended for a Carroll receiver in the air during their Class 1A Section 42 first-round playoff game Friday in Monon. The ball was intercepted; the Vikings picked off six passes in a 29-14 win.

On Friday night, the veteran group proved it could swing a contest on its own.

The Vikings’ secondary intercepted six passes off the Cougars’ duo of Ayden Ayres and Heath Richardson and returned two for scores in a 29-14 Class 1A Sectional 42 first-round victory at Horton Field.

The Vikings had four interceptions all season, and nearly tripled their output. North White (5-4) will head to Whitestown next Friday to face Traders Point Christian Academy, which walloped Tri-County, 60-8, in Wolcott.

“What a roller-coaster ride our season has been, especially defensively,” North White head coach Kirk Quasebarth said. “Earlier this year, we struggled making plays, and we hadn’t (forced) that many turnovers. I thought the defense improved as the season went on, but tonight we were able to get a lot done.”

yards in the opposite direction for a score and a 23-6 lead just before halftime.

Later, linebacker Cade Garrett grabbed a pick and ran it back 40 yards for a 29-14 score as the third quarter expired.

“I would have never guessed that it would be our secondary that we’d rely on to end up getting us the field position we needed as well as the turnovers, in general,” Ball said. “We knew they’ve taken down a few teams we’ve lost to … (with) a lot of passing, heavy pass. We knew that was what we had to be prepared for. We ended up being in the right place at the right time.”

Brayden Buschman’s came in the end zone and preserved an 8-0 lead when it quashed Carroll’s first drive. He later tipped a pass that went right into Richie Spear’s hands for a pick near the 2-minute mark of the fourth quarter.

And Ball’s final pick made up for an interception he threw with 28 seconds left in the final frame. The senior corralled his on the next Carroll snap. Seconds later, he knelt down for the last play and ended the Cougars’ (5-5) season.

A large part of the secondary’s gain came from its line, and linebackers. At least three of the Carroll picks were unleashed because Vikings pass rushers hit either Ayres or Richardson as they released the ball — Pezel drilled Ayers on Garrett’s interception, and Garrett blasted Richardson on Ball’s final-stanza pick.

“I’m really proud of our defensive line tonight,” Pezel said. “We just ripped every time, and look what happened. Got in (the quarterbacks’ faces) every time.”

Carroll collected 304 yards of offense — only 34 off its per-game average, but the Cougars only put together two drives on 50 or more yards.

“That same group was out there against Central Catholic in the sectional last year, and all this year,” Quasebarth said of a group that had 91 pass breakups prior to Friday night. “They’ve had a lot of experience with the ball being thrown at them, thrown around. They made good plays tonight, and it was pressure from the big guys up front that did a nice job in making the quarterbacks chuck it up.

“You play the game, opportunities come about and you have to take advantage of them.”

Offensively, Ball threw for 179 and a pair of TDs and ran for 56. Spear caught a TD, as did Justin Russell. Tean Reams garnered 12 total tackles, while Ball added 10. Garrett (eight), Zackery Sloan (eight), Buschman (six) and Smith (six) each accumulated six or more.

“The momentum, we were able to switch it quite a few times,” because of the pressure and turnovers forced, Ball said. “Our defense came up big.”

Added Pezel, “It was a buffet.”

A few snow showers scattered about the area in the morning, otherwise a good deal of clouds. Some mixed winter precipitation possible. High 36F. Winds SSE at 5 to 10 mph. Chance of snow 30%.