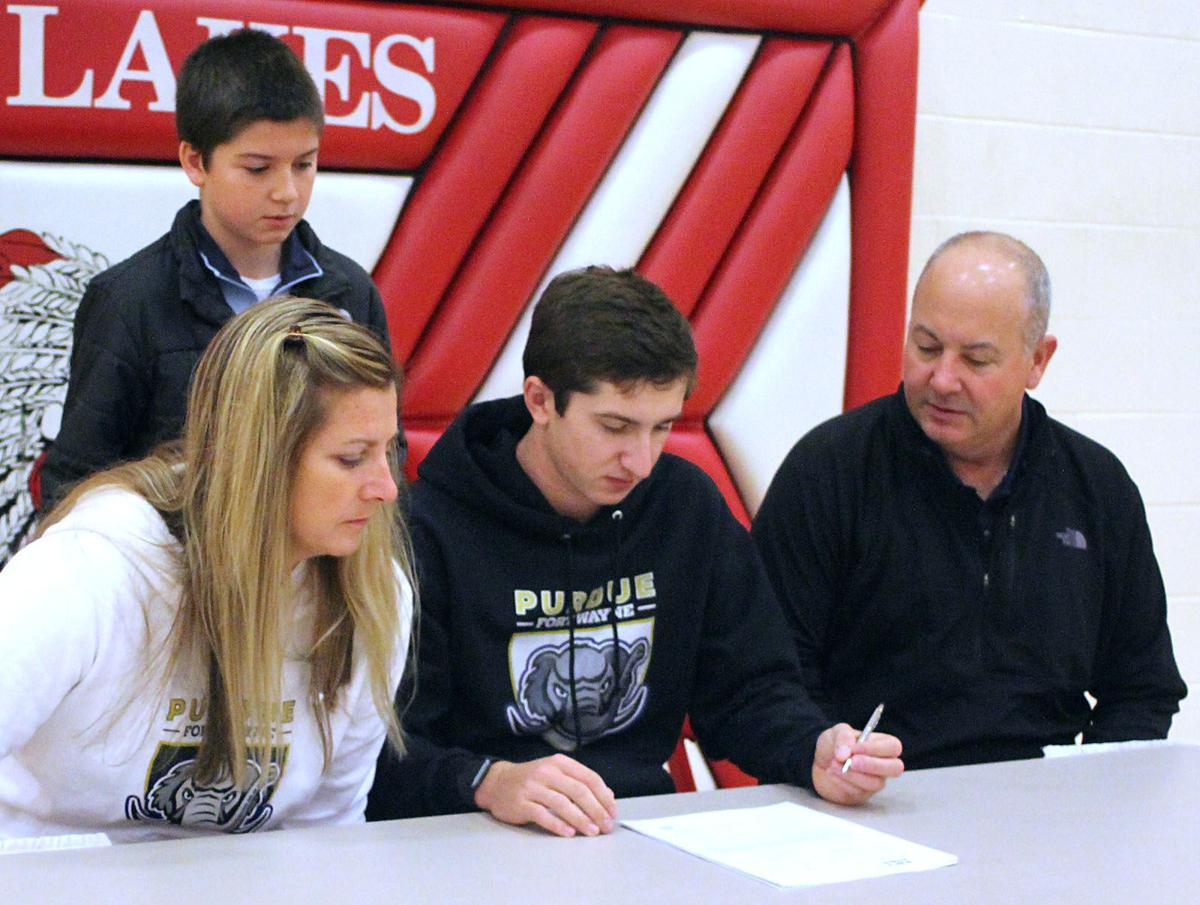 Twin Lakes’ Jadden Ousley signs his paperwork to play Division I golf for Purdue-Fort Wayne as parents Jennifer, left, and Jim Ousley and brother Jamison look on Wednesday at the high school in Monticello. 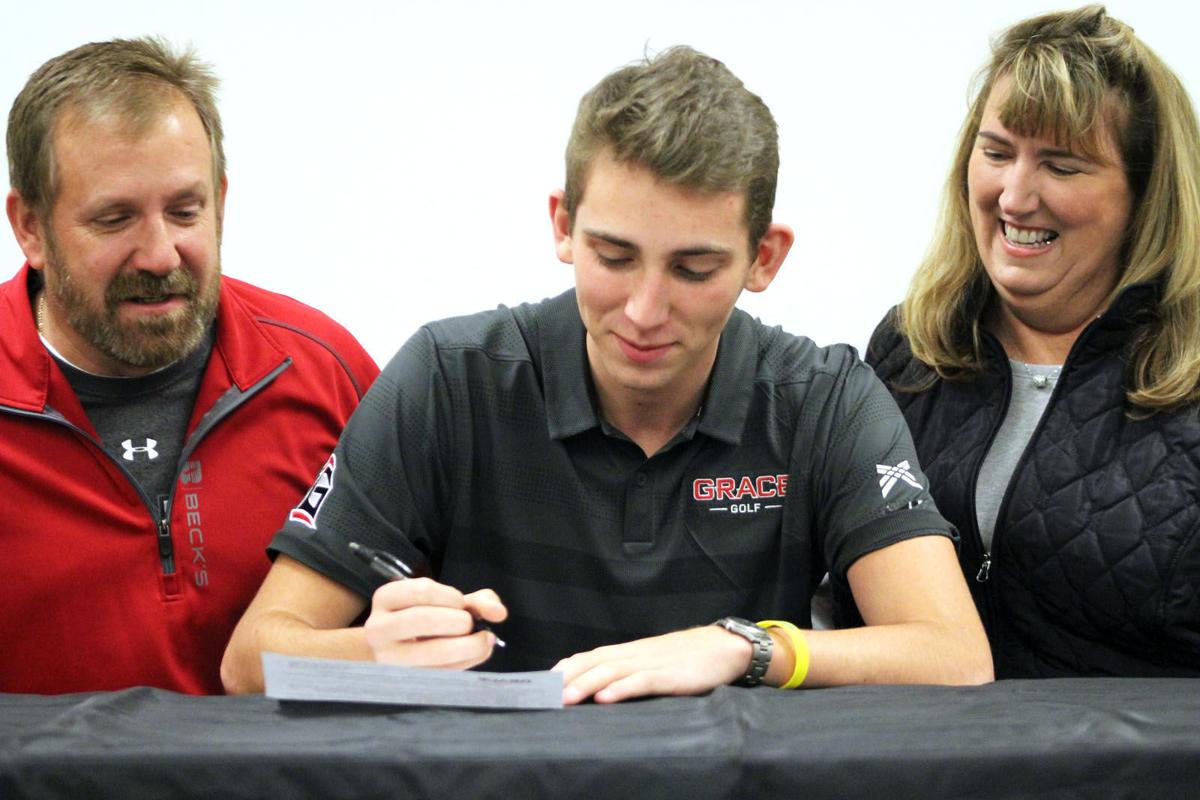 Twin Lakes’ Ty Ploss signs a National Letter of Intent to play golf at NAIA Grace College as his parents look on Wednesday at Twin Lakes in Monticello.

Twin Lakes’ Jadden Ousley signs his paperwork to play Division I golf for Purdue-Fort Wayne as parents Jennifer, left, and Jim Ousley and brother Jamison look on Wednesday at the high school in Monticello.

Twin Lakes’ Ty Ploss signs a National Letter of Intent to play golf at NAIA Grace College as his parents look on Wednesday at Twin Lakes in Monticello.

All four converged together at the same time.

So it only made sense all four were together again Wednesday morning.

Tom Harker began coaching Twin Lakes’ boys golf team during the 2016-2017 school year, and brought in assistant Bruce Comer to be part of the staff. That year, Jadden Ousley and Ty Ploss matriculated to the school as freshmen.

Ousley and Ploss have one more golf season to cement their prep legacies. But the strides they’ve made since freshman season — and work they’ve put in otherwise — allowed them all to gather during the first day of the fall signing period to celebrate where Ousley and Ploss will head in the future.

Ploss and the coaches were present as Ousley signed a National Letter of Intent to play Division I golf at Purdue-Forth Wayne. Ploss later presented Harker, Comer and Grace College coach Denny Hepler with a can of Coke after he signed to compete for the NAIA school Wednesday afternoon.

“Ty and Jadden are both very interesting characters,” Harker chuckled. “And we had a great growing process, I think. In the time they’ve been here, they’ve grown into great young men.

“They’ve become great team leaders for our team, and they both are very driven and work very hard to accomplish their goals.”

Both noted college golf was a longtime goal. Ploss cited his interest in the sport since his youth. Ousley comes from a golf family — his father, James, played at Indiana University, as did one of his uncles. Another uncle played at Ball State.

“That’s three pretty high-level Division I colleges, so that’s been my goal since sixth or seventh grade, when I really started to pursue it,” Ousley said a day after signing. “And I achieved my goal.”

Ousley was quick to credit nearly every coach he’s had along the way, with Crooked Stick Director of golf and club operations and current Indiana PGA President Tony Pancake at the top of the list.

“I’ve learned a lot on the mental side from him, and tried to pass it along to the rest of the guys,” Ousley said. “One of the things I’ve been able to work best (at) with the guys is expectations and mindset. Without a good mindset, you can’t be very successful in, really, anything you do. I learned a lot about that from Tony.”

Purdue Fort Wayne concluded its fall season recently, with a seventh-place finish at the Crusader Collegiate as its best showing. During the 2019 spring season, head coach Billy King’s Mastodons placed second at the Butler Invitational, were fourth twice and finished seventh at the Summit League Championships. He selected the Mastodons over IUPUI.

“Jadden is a perfect fit to our Mastodon golf family,” King said in a news release. “A hard-working, successful student-athlete that has a great future ahead. We are blessed to welcome him to our family.”

Ousley helped the Indians win the Logansport Sectional championship as a freshman, and feat they’ve tried to repeat since then. He placed first at that sectional with a 73, and repeated as individual champion with a 70 as a junior. At the regional level, he has carded rounds of 84, 79 and 83.

“The first day I met Jadden, he had a very specific mindset of being the best,” Harker said. “When he came onto our team, we had another pretty good player in Justin Crabbe, who was coming off a state basketball final. Jadden’s goal was to try and beat (Crabbe) on a daily basis, and of course that made (Ousley) better.”

“Once Justin left, Jadden’s goals became to beat certain other players around the state. He has always pushed himself to be the best he can be.”

Comer and Harker both praised Ousley’s personal growth and taking on of a leadership role as the seasons have gone on.

“Both their weaknesses — when they first started out — was their maturity level,” Comer said of Ousley and Ploss. “They were both extremely talented when they came into the program, and that was obvious.

“To see them take some of the other players, younger freshmen underneath their wing and work with them on the side has been an awe, an experience. It’s made us proud.”

Ousley appreciated their compliments, noting he has “always been a little fiery.”

Ploss was happy for his teammate.

“Him and I have known each other since fourth grade, when I moved here from Pioneer,” Ploss said. “We’ve been pretty good friends since then, and I know it’s been a dream of his to go on and play college golf. I’m glad to see him fulfill that. It means a lot for us to both go play college golf.”

Ousley, in turn, expressed joy in Ploss’ signing with Grace.

“Ty is always giving it 110 percent,” Ousley said. “He’s always there (training), he always wants to get better. He works hard, he works at it and he’s determined.

“He’s a competitor and he’s a fighter … I know nobody likes to lose, but losing doesn’t bother some people. But it bothers him.”

Ousley added Ploss breaking 80 at the 2019 Logansport Sectional (86, which tied for fourth) was a turning point for his career. It was Ploss’ only postseason round under 80 during his first three years, though he shot a 77 at the 2018 Hoosier Conference meet and has broken 80 a handful of times the past couple seasons.

When it came time for his signing ceremony, Ploss stepped to the table in a pair of shined dress shoes, pleated silver slacks and a Grace College polo. He also tried on a Lancers long-sleeve polo Hepler brought to the ceremony.

“I try to present myself well for my new coach and my old coaches, seeing as how they’ve done so much for me and I’m going to have a bright future,” Ploss said.

Comer, Harker and Hepler all laughed when presented with the beverages.

“Ty’s the same way (as Jadden in work ethic), but Ty’s approach has been different,” Harker said. “He’s had various other things he’s also focused on … but golf-wise, it’s been a similar path. He’s done everything he can to make himself better.”

“I went up there for a visit in August, and it was just a beautiful campus,” Ploss said. “Everybody there was just so genuine, and kind. I really enjoyed that about the campus. It was just a very good experience and led me on the path to choose Grace.”

Hepler watched Ploss play multiple times over the past year, and liked his mental attitude and perspective.

“First of all, he’s a gentleman. He’s been raised very well, so he fits into what we think our mold, our culture is,” the coach said. “I think the attitude ¬was the best thing — he didn’t get too upset, didn’t get too bent out of shape about a bad shot. Rolled with it, accepted it, moved on.”

That demeanor has come over time for both, and has turned into a driving force.

“They both have great practice ethics,” Comer said. “They put in the extra work. There are times I drive past the golf course — one weekends, after practice — (and) they’re still out putting, still on the driving range hitting balls. It’s cool to watch them grow the way they’ve grown.”

“They’re very competitive, but they both strive to make a team better. They take the time to work with the other kids … we don’t have to push them to do that. They do that voluntarily.”