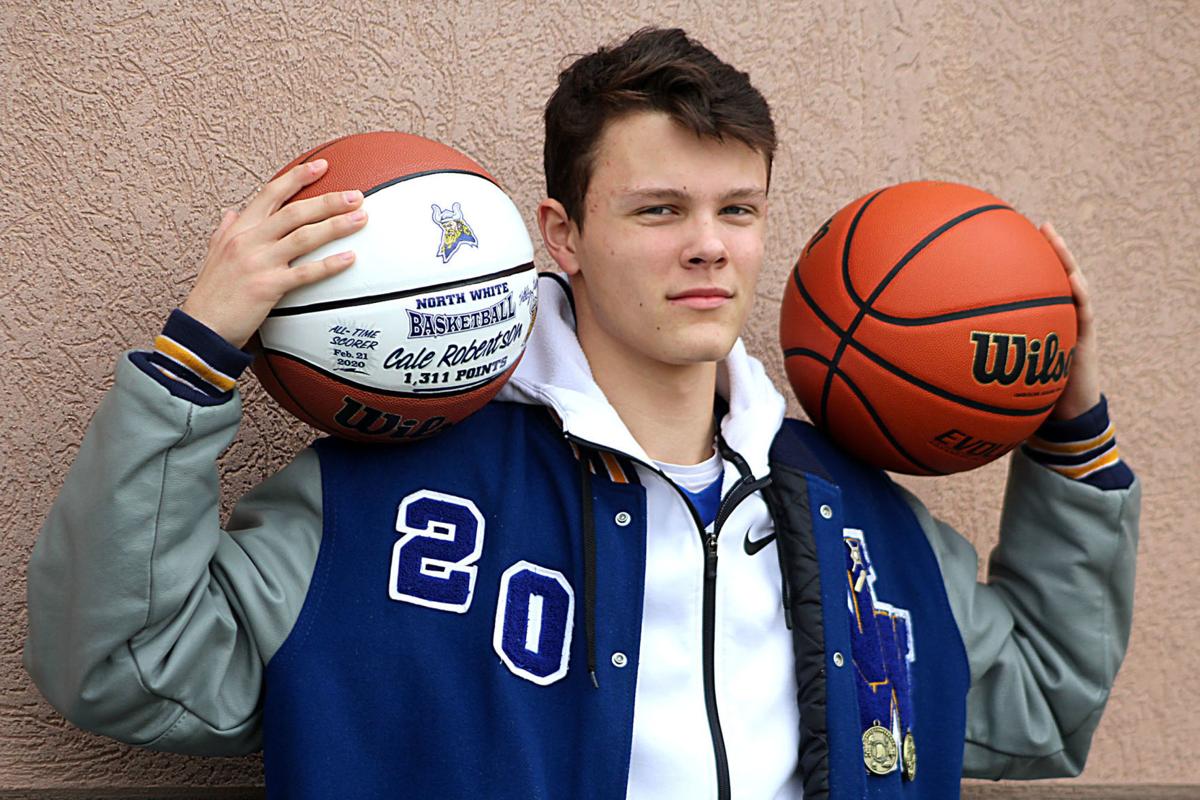 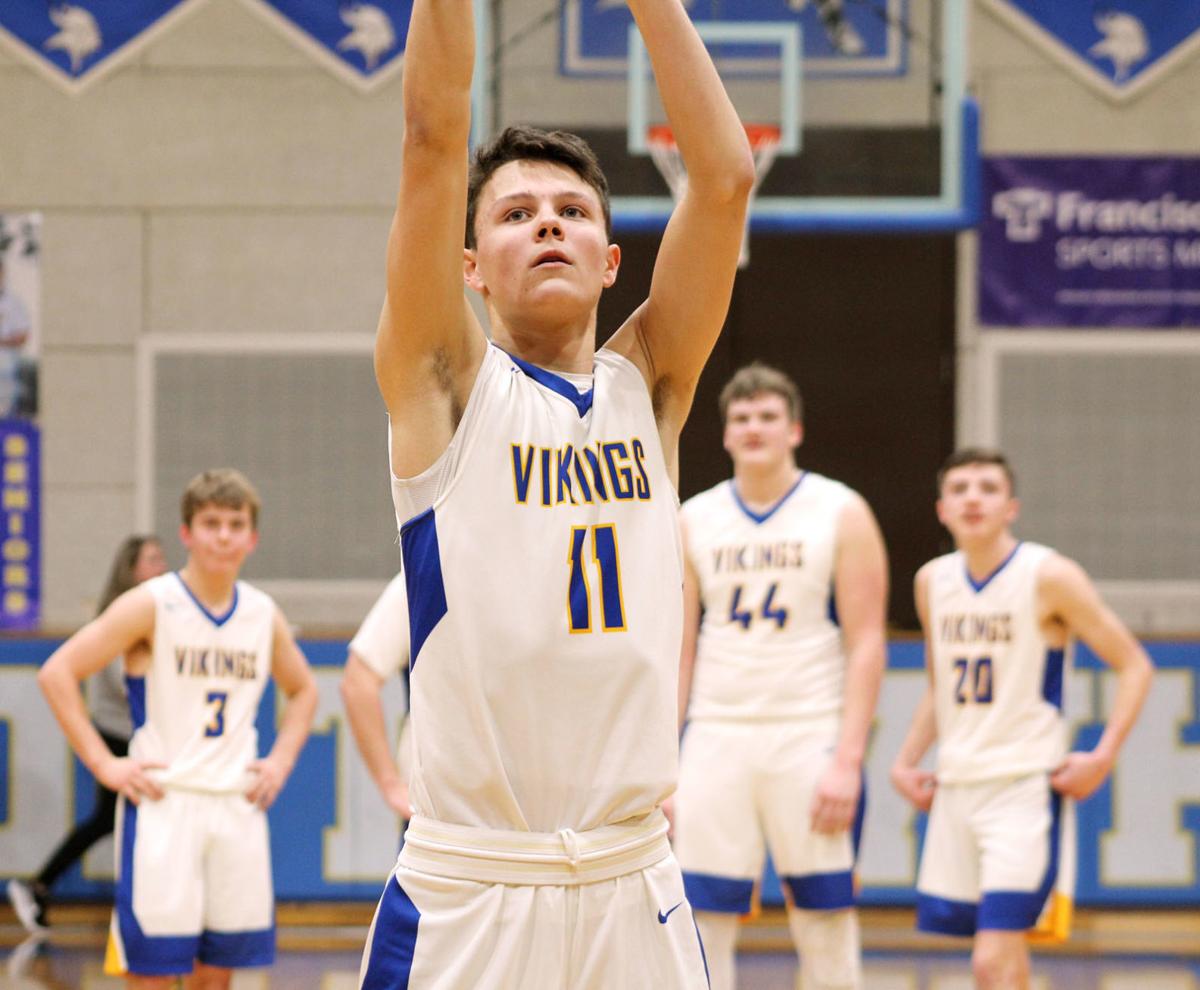 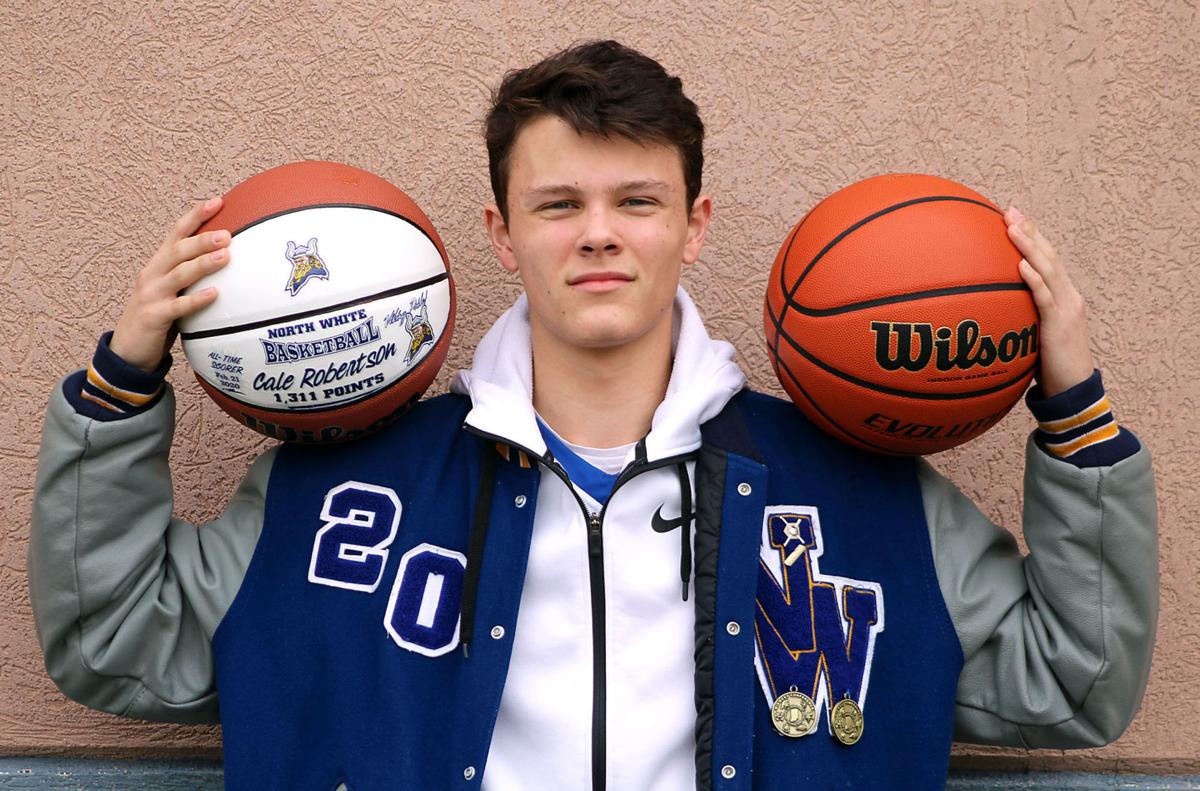 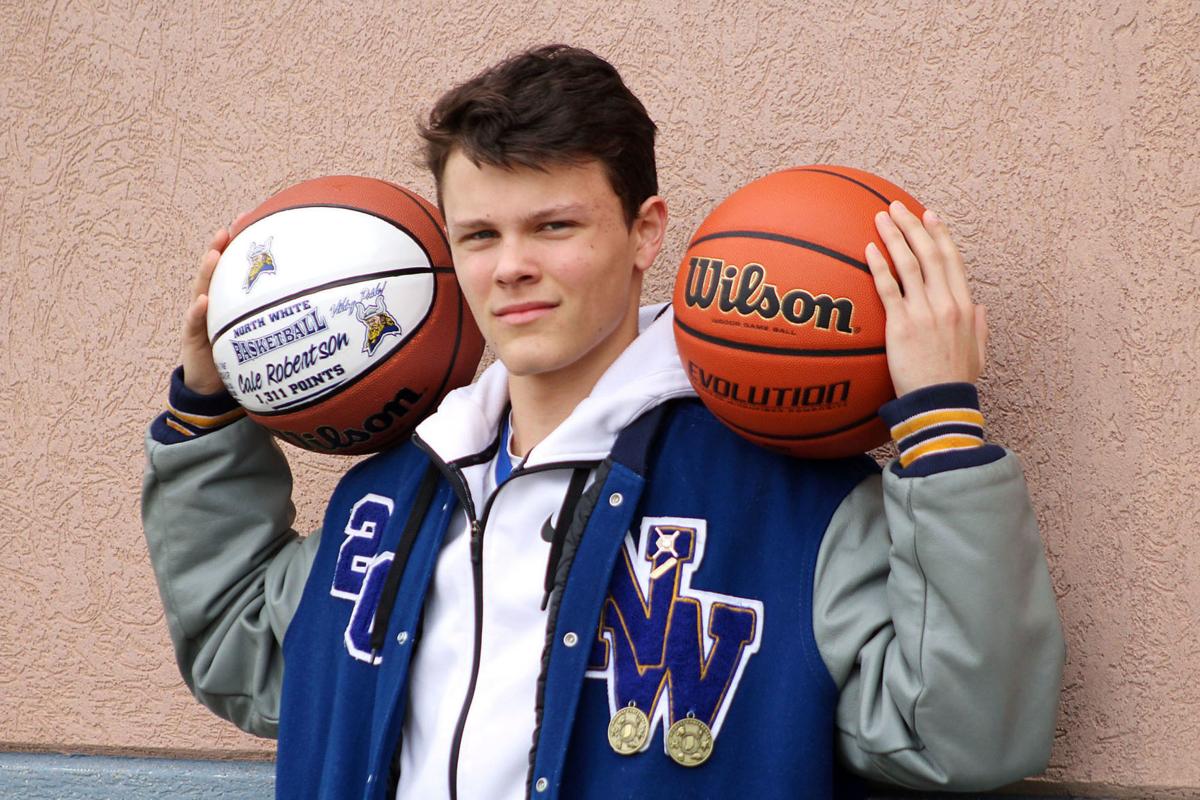 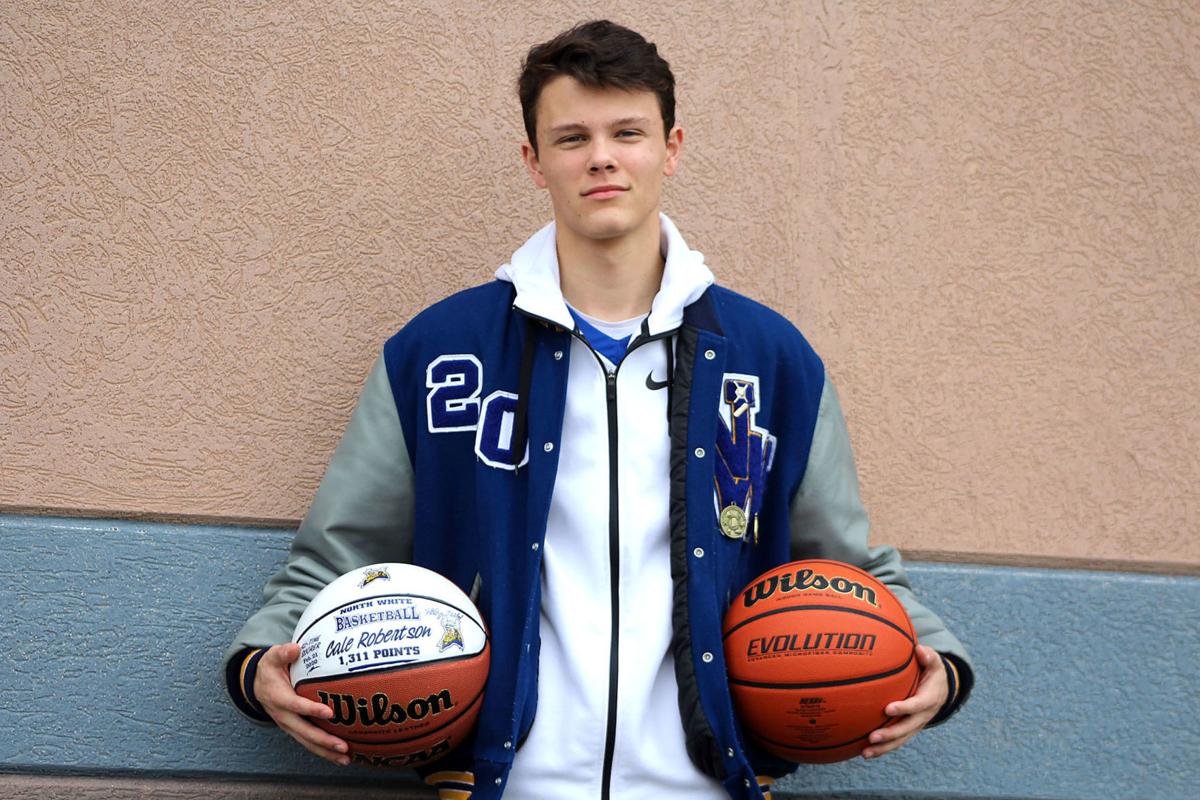 Cale Robertson sat in his truck and looked to his right. Eyes locked.

His vocal modulation conveyed the words he spoke.

The North White senior basketball standout uttered those words in response to the query, “Are you at peace?” The question came after the revelation he was ending his official basketball career. Opportunities existed to play in college.

“I did. I used to,” the senior said of playing beyond high school. “But I have my heart set on Purdue — go and study agriculture. So I don’t think (playing college basketball) is an option anymore.”

At some point, playing a sport ends. In a way, Robertson’s decision adds to his local legacy: Small-town Hoosier plays four years on varsity, grows into an all-around player and leader, wins a couple conference championships, sets the school scoring record, and moves on with life.

“I don’t know about everything I thought it would be because we wanted a sectional championship,” the shooting guard said. “But we shared (a Midwest Conference championship) with Tri-County, I achieved a lot of records, got a lot of goals I set. Can’t ask for much more, you know?”

His final accolade comes in the form of being selected White County Player of the Year in voting conducted by the Herald Journal and the four county head coaches. Robertson averaged 18.4 points, 4.9 rebounds, 2.5 assists and 1.4 steals per game, while shooting 40 percent (87 for 218) from 3-point range.

He also broke North White’s career scoring record, which sits at 1,402 points. First came 1,000 points in December, and Luke Diener was in the stands as Robertson cracked his 1,311th point on a technical-foul free throw Feb. 21.

“In one word, everything,” head coach Matt Sipkema said when asked what Robertson meant. “He’s been patient, a great learner, a great leader and an all-around great kid. Great work ethic, and has the attitude where he wants to learn, get better and make others better as well.”

Robertson’s always offered that, according to friends.

“One of the first basketball teams I played on I was playing up two grades with Cale,” sophomore point guard Hunter Pogue said. “Cale and I spent hours shooting together after practice, before games, on weekends off, even before I got in high school.”

Added classmate Chase Connell, “It was always known that he was gonna be a good player. … He was going to be a star in high school.”

His senior year included career bests in points (442), field goals made (149), field goals taken (323), field goal percentage (46 percent), 3-pointers made and taken, 2-pointers made (62), total rebounds (117), and blocks (seven), among others. Robertson also scored a career-high 37 points in a loss to South Decatur in December.

“He’s a very hard worker, and being able to see all that work pay off on the court is awesome,” classmate Nolan Princell said. “Every accomplishment that he has received, he’s more than earned.”

“You always have that small mini-hoop in your house as a little kid, and I played a lot on that,” he said. “I think my first word was ball — that’s what my parents have told me.

“It was a match there, right away,” he laughed.

Smaller than others as a youth, he displayed high basketball IQ by deciding not to fight among the trees. The decision blossomed into a career 38 percent mark (273 for 717) from beyond the arc, with two seasons at 40 percent. Seeing idol Robbie Hummel hit 39 percent from 3-point range while at Purdue reinforced his philosophy.

“That was the easiest shot for me to get off, and that’s how it developed,” Robertson recalled of pre-adolescence. “The easiest thing to do, and I tried to master it.”

Repetition was obvious. Help from a growth spurt was also an aid.

“He got more physical and taller. As a 6-foot-2 guard, he could shoot over a lot of people (at this level),” Sipkema said. “He has such a quick release and such a pure shot. And he had all the confidence in the world.”

Math reveals 273 3s translates to 819 points. Two deductions: A player close to 1,000 points would gun for the number. Said player would probably also strive for the scoring record.

Robertson scored 553 his first two seasons on varsity. He credits then-coach Ron Best for allowing him to flourish.

“My coaches giving me the opportunity was the biggest thing,” Robertson said. “Coach Best gave me a lot of opportunity to play when I may not have played in other places. I thank him for that. And coach Sipkema gave me the green light — score whenever.”

Sipkema also asked his star to add to his game. Rebound more, pass more, defend harder — and get to the rim more. It coincided with a commitment to the weight room as Robertson filled out.

“This year, he became a complete basketball player. Not just from 2-point range, but defending, rebounding, getting stronger in the weight room,” the second-year coach said. “We challenged Cale a lot this year … Getting stronger made him a better all-around player.”

Alongside came the all-encompassing leadership role. The turn began last year, according to Pogue, and just intensified this season.

“Entering my freshman year I really did not know what to expect from high school basketball,” Pogue said. “Cale did a tremendous job ‘showing me the ropes,’ and he’s been a great example to follow as an underclassman.

“Whenever I got down on myself … he was always the first one to reassure me that I would be OK.”

Leadership qualities were always there, according to Connell.

“He was in the hospital the night after I broke my nose, checking up on me,” Connell said. “He is the kind of guy that would drop anything to help someone out. He’s been my best friend for 15 or so years now, and there hasn’t been a day that I couldn’t count on him to help.”

“It was impressive that there were days he’d be able to get his points, or other stats, because every team came in thinking ‘How do we stop Cale Robertson?’ The fact he was able to have the year he had with the amount of work other teams put into him is just another testimony of how good of a player he is.”