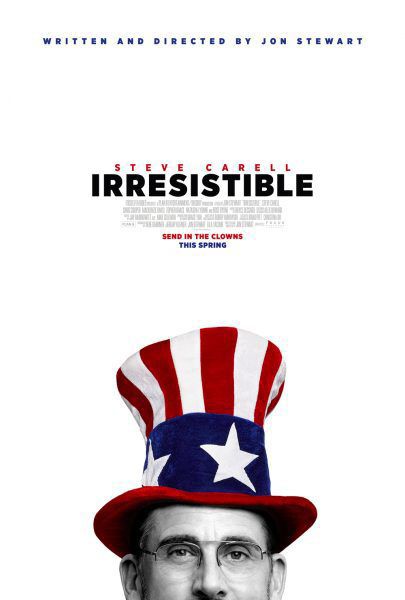 “Irresistible” is available On Demand through streaming services and likely through your local cable provider. The film is rated R for language including sexual references. Its running time is 101 minutes.

The political comedy “Irresistible,” from director Jon Stewart, is the latest medium-profile release to go straight to On Demand.

And unlike a number of the movies I’ve been reviewing lately, I think it could have done well for itself in theaters.

It wouldn’t have been a blockbuster, nor would it have been an awards contender, but it could have gotten a nice little niche audience of adults who were tired of having special effects blasted in their faces. It would have fit into the slot where “Long Shot” made $30 million last year.

I know that isn’t saying much, but after two weeks of reviewing movies that should be stricken from the Earth, that’s relatively high praise.

Stewart’s former “Daily Show” cohort Steve Carell stars as Gary Zimmer, a Democratic campaign manager from Washington, D.C., stuck in a funk after the 2016 election. He sees a YouTube video of Wisconsin farmer Jack Hastings (Chris Cooper) giving an impassioned speech at a town hall meeting, and decides to go to the struggling small town of Deerlaken to help Hastings run for mayor against popular Republican incumbent Braun (Brent Sexton).

He says he’s doing this to help the Democratic Party increase its presence in the Midwest, but it probably has more to do with him simply needing a project to work on.

Much of the film is just light jabs about the culture clash between the city slicker and the small-town locals. Gary expects his hotel room to have Wi-Fi; it doesn’t. He expects volunteers to respond to bossiness and condescension; they don’t. He expects the food to be terrible; it isn’t (to his delight).

I expected Hastings to dismissively continue doing farm chores while Gary is trying to talk to him. I was right about that, but at least this film doesn’t do it over and over again like in “The Last Full Measure.”

Things pick up when the Braun campaign gets help from Faith Brewster (Rose Byrne), Gary’s Republican rival. She’s able to raise ample funds for the campaign, which Gary and Jack have to match with excessive fundraising of their own.

BOB AT THE MOVIES: Casting drowns 'Force of Nature' before it starts

MORRIS: A history of 'Podunk' to 'nimrod'

The election soon turns into a war of Gary and Faith’s egos, some embarrassing mistakes are made, and people are liable to get hurt. None of this sits well with Jack’s principled daughter Diana (Mackenzie Davis).

The movie teases a romantic connection between the 57-year-old Carell and the 33-year-old Davis that creeped me out, but is handled rightfully.

This being a Jon Stewart comedy, it’s no surprise that this turns into an “issue” movie, but I can’t say what that issue is without getting into spoilers. I will say that the movie never convinced me that it was an interesting issue.

Even disqualifying the last six months of our nation’s history, did Stewart really think that this issue was a high priority, one worthy of the time and resources it took to make an entire movie?

This is a rather toothless endeavor for an artist of his influence.

“Irresistible” may not work as cutting political satire, but it sometimes works as a comedy. Carell with his social clumsiness is still one of the best comedic actors of his generation and Byrne is always good for laughs with her trash-talk.

Then again, this movie is a noticeable step down from better work those actors have done for directors like Adam McKay and Paul Feig.

I think the problem is Stewart, who seems less adept at managing comedic timing from behind the camera than in front of it. This movie should just revel in the small victory that is me not feeling strongly about it one way or the other.