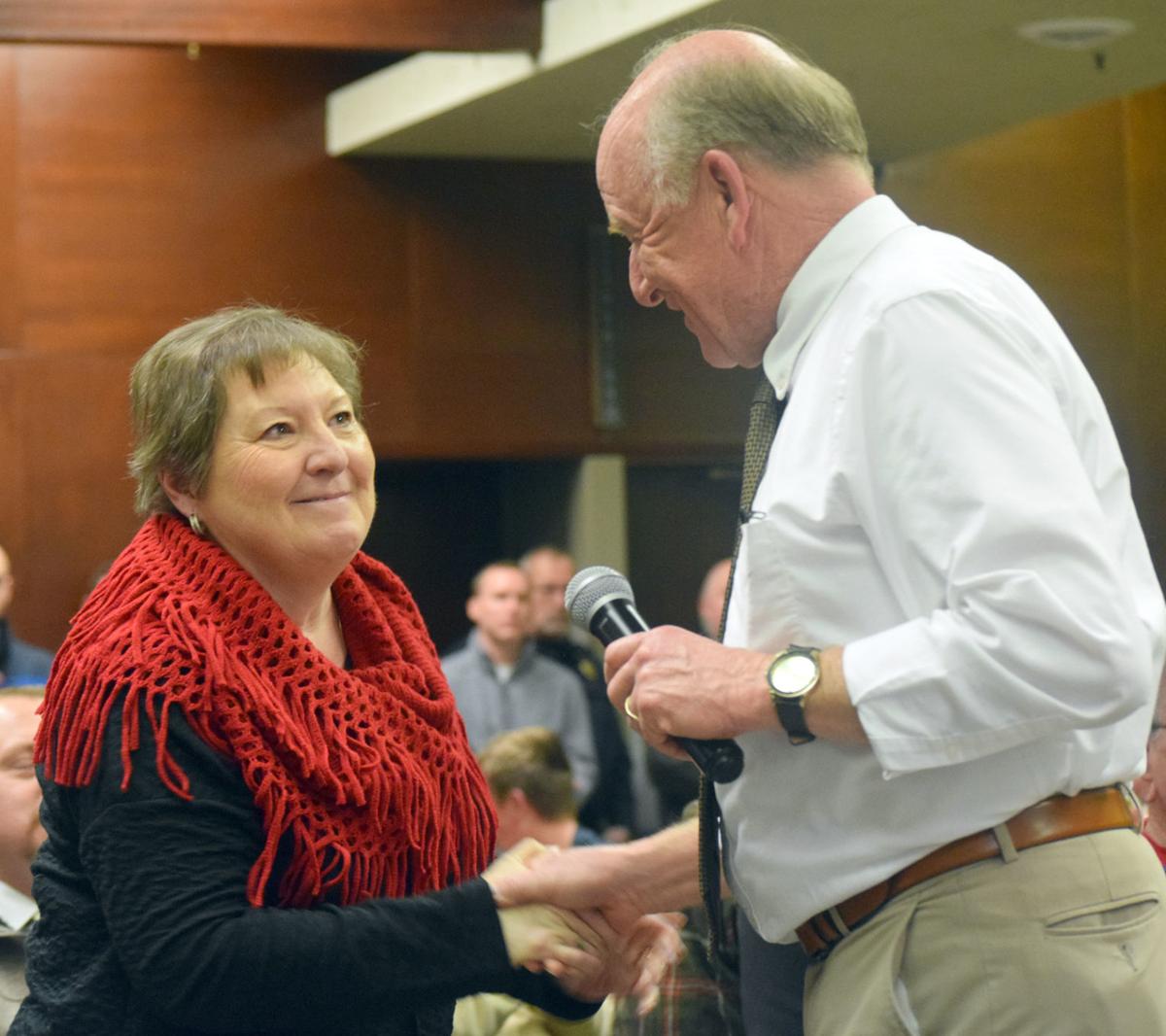 White County Sheriff Bill Brooks and Monticello Mayor Cathy Gross talk for a brief moment during Thursday’s town hall meeting at the Tippecanoe Country Club. Brooks said he was extending an olive branch, on behalf of the sheriff’s department, to the city in hopes of improving their working relationship. 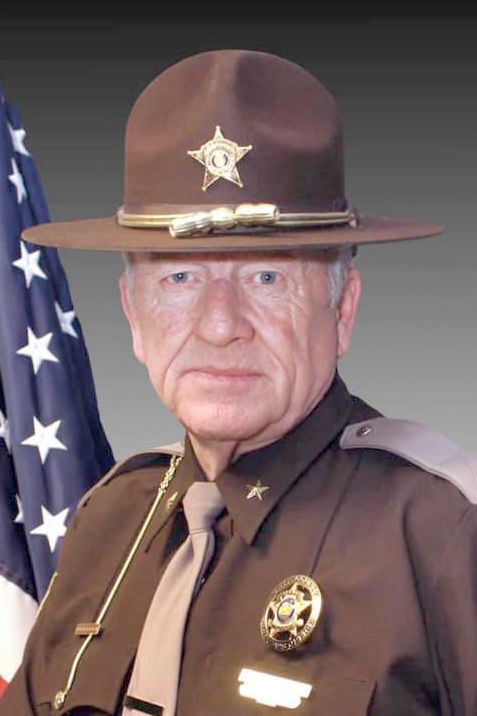 The sheriff conducted the office’s first town hall meeting to inform the public about the goals that were accomplished during Brooks’ first year in office, goals that weren’t achieved, a behind-the-scenes “good, bad and ugly” look at White County politics, and changes that have taken place since the beginning of 2019.

“A lot has happened, mostly good,” Brooks said. “I want to make it clear that (the town hall meeting is) going to get tense. Some people probably may be hurt, but I will not say anything that I don’t have the facts (for) right in front of me, black and white. It’s not to bash any person. Sometimes it hurts, we failed and we have to address it, but we don’t just turn away and (say) ‘Please don’t talk about it.’”

Brooks talked about saving the county money when others advocated for spending more. One example Brooks used was the purchase of a computer-aided dispatching system for White County, spending $74,000 on what would have cost, he said, between $300,000 to $400,000 “under the previous administration,” presumably referring to former Sheriff Patrick Shafer.

Brooks also addressed a loss of funds from the Department of Corrections that the former administration, he said, failed to claim, which he estimates to be nearly $500,000.

Brooks added that, even with the help of state Sen. Brian Buchanan, who also attended the town hall, the money lost couldn’t be recouped.

Brooks said he’s established a relationship with Carroll County Sheriff Tobe Leazenby to take inmates while that county begins building a new jail. It’s an effort, he said, that not only would bring in money to White County, but establishes a relationship in which Brooks can send inmates there, if the need arises.

Some of the changes Brooks has made, such as training corrections officers on expanded procedures and using inmates to conduct simple maintenance around the jail, has freed deputies for more patrols and make more arrests, which he said has kept the jail filled. It has also saved the county money, he said.

When talking about the White County Commission is when Brooks removed the filter, so to speak.

When confronted with several deteriorating conditions inside the jail, such as black and green mold on air filters in the building, chipped paint on the jail floor, grimy shower stalls for inmates, and a rotted wall near a water conditioner, Brooks said the commissioners ignored the issues.

In the end, Brooks said work to the rotted wall and some minor painting inside a holding cell was completed without spending any money, while fixing the shower stalls — estimated by commissioners to cost about $10,000 for each stall — was done for $43,000.

Brooks said he also went ahead and had the air system repaired to get rid of the moldy filters, which he estimated hadn’t been changed in 7½ years.

“It hadn’t been addressed,” he said. “We’re going to address it because we have to breathe it. I have people who are sick constantly.

“I’m proud of (our staff). We’re fixing what we can with what we have.”

Brooks also mentioned the commissioners’ reluctance to continue with charging inmate fees for booking upon sentencing and change of address/work status for violent and sex offenders — something he said is being done in several other Indiana counties, including Carroll County.

Brooks said the commissioners have put up roadblocks at every turn.

“You elected me to take care of the problems that were here, and that’s what we’ve been trying to do,” Brooks added. “The (sheriff’s department staff) has done it. I may have led it, guided it, but they did it. I did not do it. These people are working for you.”

Brooks said he was warned “by a few people not to talk about certain things,” adding that some of White County’s political leadership are frightened of the constituency.

“What they’re scared of is you,” he said while addressing the standing-room-only crowd. “They’re not scared of me. They’ve been fighting me all year. You’re the people they’re worried about. Why else would they come to me worried?”

Brooks said the public must be made aware of what is happening “behind the scenes” in White County government.

“It’s not all negative. We have a lot of accomplishments and entities that are working with us. The (White County) Council is probably the best. All they ask is of me is to come in and explain it. The commissioners, until last week, never came to the jail to find out what we want. Almost every (county) council person has been to the jail.”

Brooks said he doesn’t want to sound like he is disappointed with all of the commissioners, noting that he “thinks the world” of Steve Burton and John Heimlich. But he urged newly registered candidates for commission seats to “pay attention to what is happening.”

“Running for office is tough. When you’re up here on this end, you’re attacked constantly,” he said. “If you don’t have the shoulders, you better go home.”

Brooks said he hopes he can work with the new candidates for commissioner should they be elected this fall.

“I don’t want a ‘yes’ person. I just want to be able to talk and that’s it,” he said. “We’ll talk, we’ll work it out and move on. I don’t expect to get everything, but for crying out loud, come out and ask what’s going on like the (county) council does. That’s how you work together. … That’s all we ask for.”

While giving all the credit to his staff for the list of accomplishments, Brooks noted a first-of-its-kind ceremony at the sheriff’s department that saw the promotion of several officers to higher ranks. He recently promoted Deputy David Rozzi, Detective Erik Janke, Deputy Josh Shoemaker and Deputy Matt White to the rank of sergeant.

“For the first time in the history of the sheriff’s office, we now have a career path for deputies to progress and work for,” he said.

Brooks said the atmosphere in the sheriff’s department is now a positive one, despite the challenges.

“You elected me to do it and I’m going to keep doing it.”

Sheriff Bill Brooks had a lot more to say than what could be included in this story. To hear the entire town hall meeting, visit www.thehj.com and listen to the audio link included within the online story.

Rain showers early becoming a steady light rain for the afternoon. Temps nearly steady in the mid to upper 30s. Winds NNE at 10 to 20 mph. Chance of rain 80%.

Snow during the morning will transition to snow showers during the afternoon. Temps nearly steady around 30. Winds N at 15 to 25 mph. Chance of snow 90%. 1 to 3 inches of snow expected. Higher wind gusts possible.