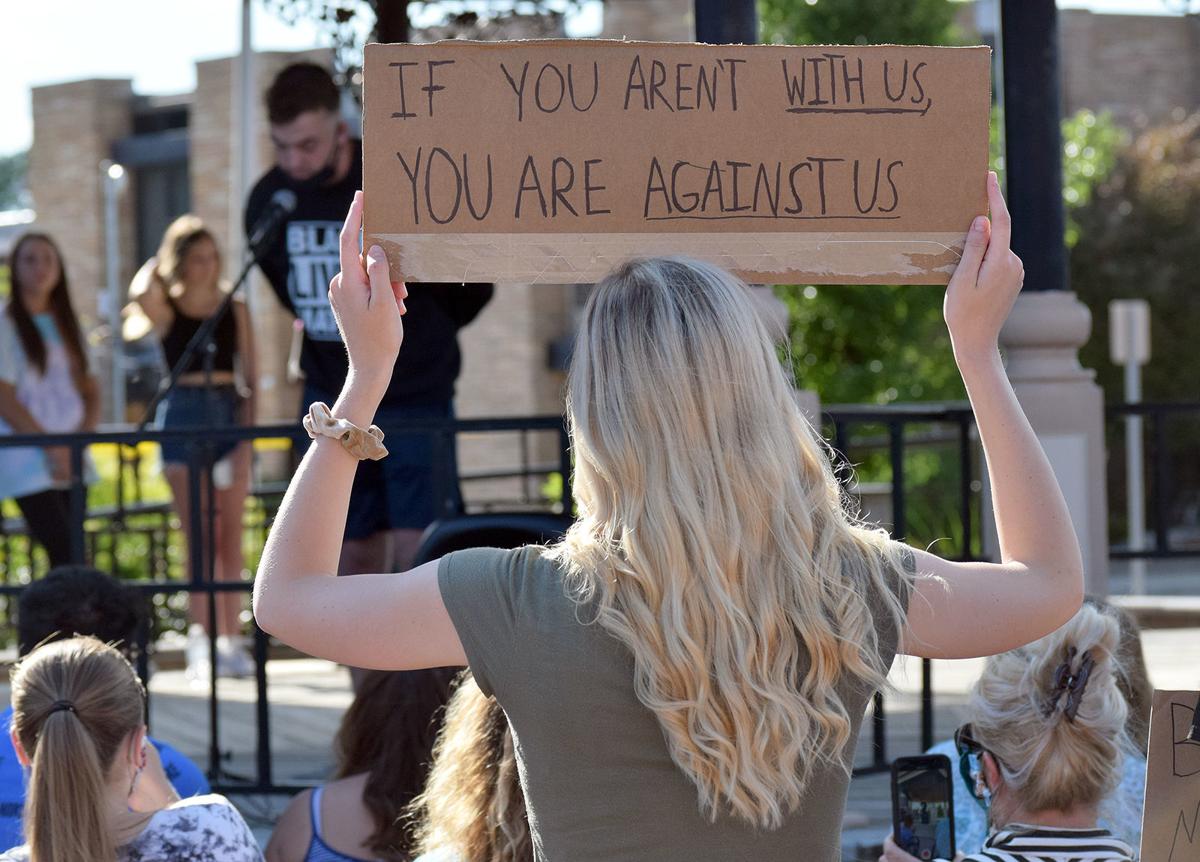 A rally attendee holds up a double-sided sign while Luke Dehann speaks on the gazebo stage Thursday during the “Rally for Change” event at the White County Building. 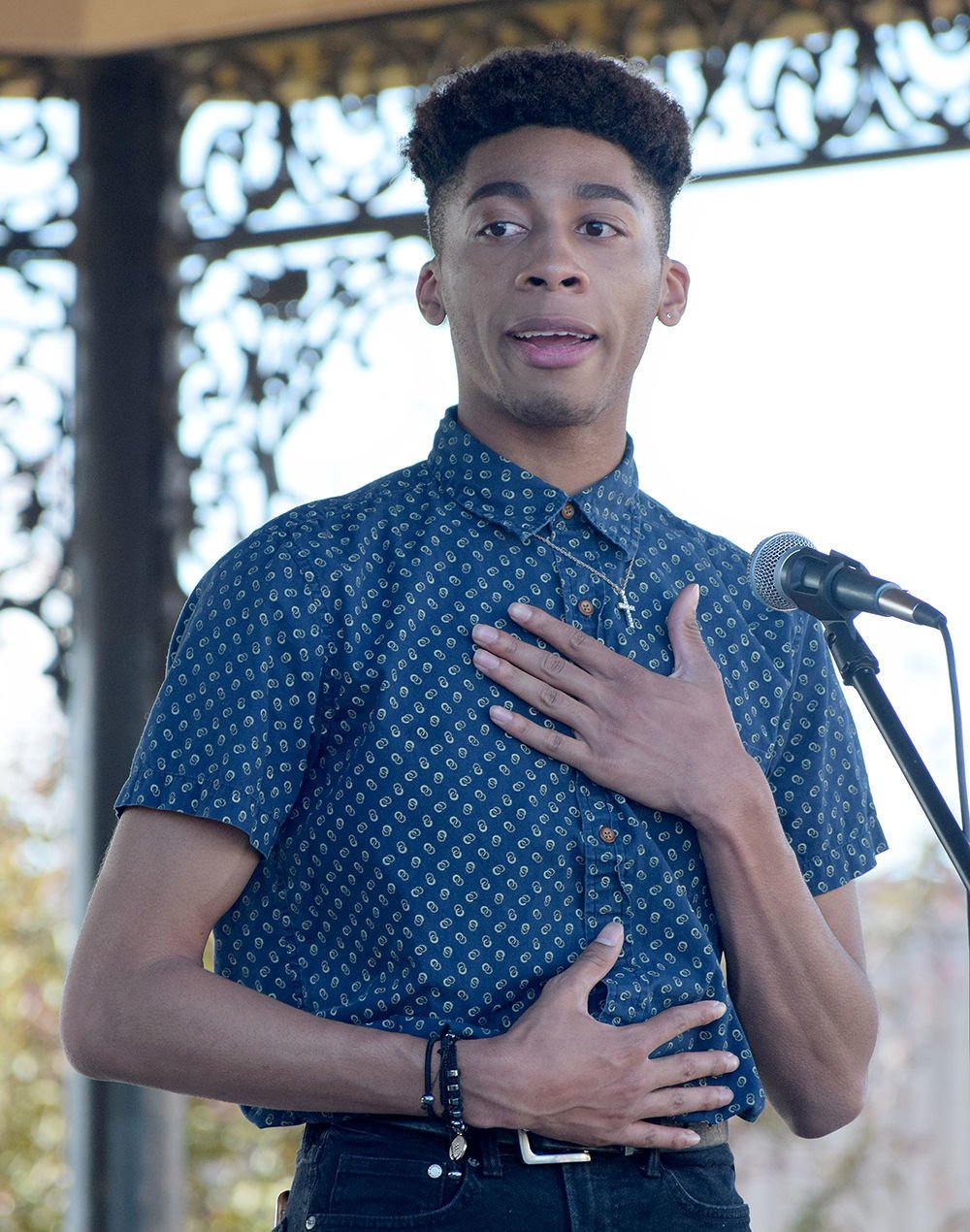 Izak Metcalf recites a poem based on his life experiences. 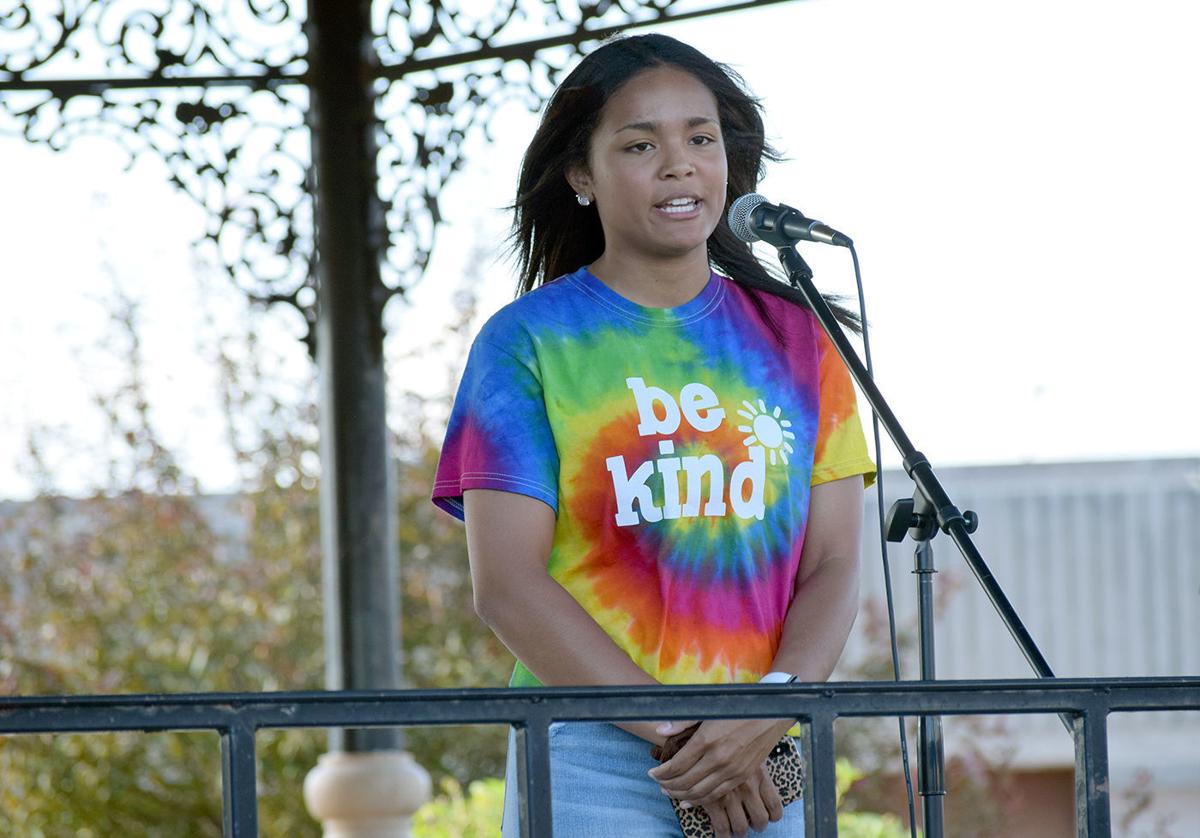 Liz Artis tells the crowd about what it was like as an African American growing up in a predominantly white town.

A rally attendee holds up a double-sided sign while Luke Dehann speaks on the gazebo stage Thursday during the “Rally for Change” event at the White County Building.

Izak Metcalf recites a poem based on his life experiences.

Liz Artis tells the crowd about what it was like as an African American growing up in a predominantly white town.

MONTICELLO — Any tension felt prior to Thursday’s “Rally for Change” event at the White County Building gazebo quickly melted away when people began gathering on Constitution Plaza to share in the message, “Black Lives Matter.”

Organizer London Griesey, of Monticello, was ecstatic about how the event turned out.

“Overall, I think it went perfectly,” she said. “We had a lot more people than I personally expected. We presented our message the way we wanted it to be.”

A crowd of more than 100 people settled in and listened to a handful of speakers talk about injustices African-Americans face in the U.S.

The event started at 6 p.m., but local law enforcement began blocking off street traffic around the county building about two hours prior to ensure a peaceful event.

Speakers included Fred Criminger, pastor at Faith Covenant Fellowship Church, who offered the opening prayer, followed by Kiara Johnston, who read off the names of people who have been killed because of systemic racism and social injustices. Crystal Billings, Emily Cross, Luke Dehann, Alex Cobb and Siere Rupe also spoke.

Two additional speakers, Izak Metcalf and Liz Artis, shared their personal experiences of the hardships they experienced while growing up in White County.

Metcalf relayed his experiences through a poem, which seemed to strike a powerful chord with those in the audience.

Metcalf, an incoming senior at Purdue University, said he doesn’t get the privilege of counting on police officers to protect him because of the color of his skin.

“I have to live in fear of facing future harassment,” he said.

So what privilege does Metcalf have?

“The answer is simple. I have the privilege of being me,” he said. “That means that I get to make my own choices, and those choices are what define who each and every one of you are. Make the right choices.

Artis, a 2019 Twin Lakes High School graduate and sophomore at Purdue, said growing up in a predominantly white town was difficult at times.

“I’ve been identified as the ‘black girl’ or the ‘Oreo’ for as long as I can remember,” she said. “My skin color has defined me all my life. I was in an all-white household comprised of my mom, stepfather and siblings. Every time I meet someone new, one of the first questions I get asked is if I am adopted.

“I’ve had grown women come up and put their fingers through my hair, asking why it feels like that. I have been called the N-word and even had people tell me that I’m pretty for a black girl.”

Artis recalled a time in middle school when she and her mother went to officials to report racist remarks directed at her.

“The only punishment that was ever given was separation of seats in class,” she said. “These are just a few of the comments and actions that I have faced. They have all been pushed to the back of my mind to the point where it doesn’t bother me anymore because no one is held accountable for their actions.”

She said people who think racism doesn’t exist in Monticello and White County are wrong.

“Just because it doesn’t happen to you doesn’t mean that it’s not there,” she said. “It’s here and it’s real.”

Cobb, a senior at Indiana University, started off with a quote from Martin Luther King III: “If you’re tired of hearing about racism, imagine how many people are tired of experiencing it.”

“More than 60 years after the assassination of his father, he still has to say things like that,” Cobb said. “This shows that racism is something that will continue on forever if we let it. So don’t let it. Don’t support businesses that have racist owners and racist practices. Call others out for their actions and their words, and hold everyone accountable. Show them that they will no longer have a place in our society.”

Rupe grew up in White County and is now living in Indianapolis attending college.

“You can’t see white privilege when you’re surrounded by it. In a small town like Monticello, being predominantly white, you may think something like white privilege doesn’t exist, but it doesn’t excuse the fact that it does,” she said. “No singular human on this earth is perfect. We’re not trying to start a race war; we’re trying to end one. That’s why we need everyone to be together.”

Griesey said society is facing a generational problem — systemic racism and inherent biases — that must be addressed now.

“As a small town in rural Indiana, we sometimes believe that the problems of the outside world don’t affect us. The reality of the situation is, inherent bias and systemic racism are weaved into almost every institution we have,” she said. “This is not meant to be a moment of division, but of unity. We all need to come together and put aside this political football. Equality for all should not be a political discussion.

Griesey thanked law enforcement for allowing participants to voice their message in a peaceful manner before closing the program.

“Rally for Change” is inspired by Black Lives Matter, an international human rights movement that originated within the African-American community. It campaigns against violence and systemic racism toward African Americans.

Most recently, the death of George Floyd in Minnesota triggered demonstrations and protests against police brutality and police racism throughout the country and the world.

“I am simply bringing this conversation to the forefront of our community, amplifying those voices that have been drowned out by past generations,” Griesey said of the rally. “We all have to be part of the solution, not the problem.”