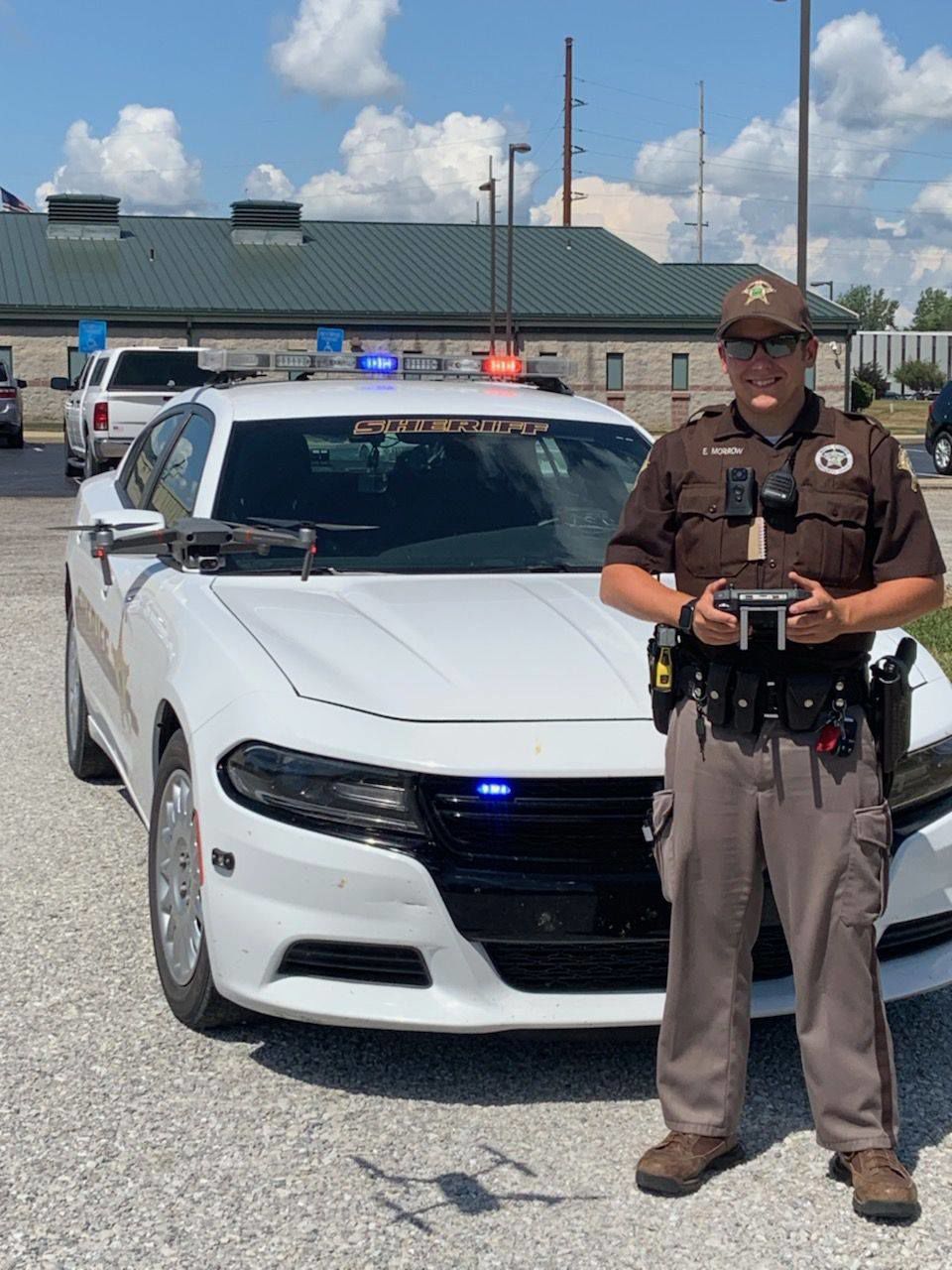 Deputy Evan Morrow operates the White County Sheriff’s Department drone while posing for this photo. He is the first deputy at WCSD to train and pass FAA certification, which he did on his personal time. 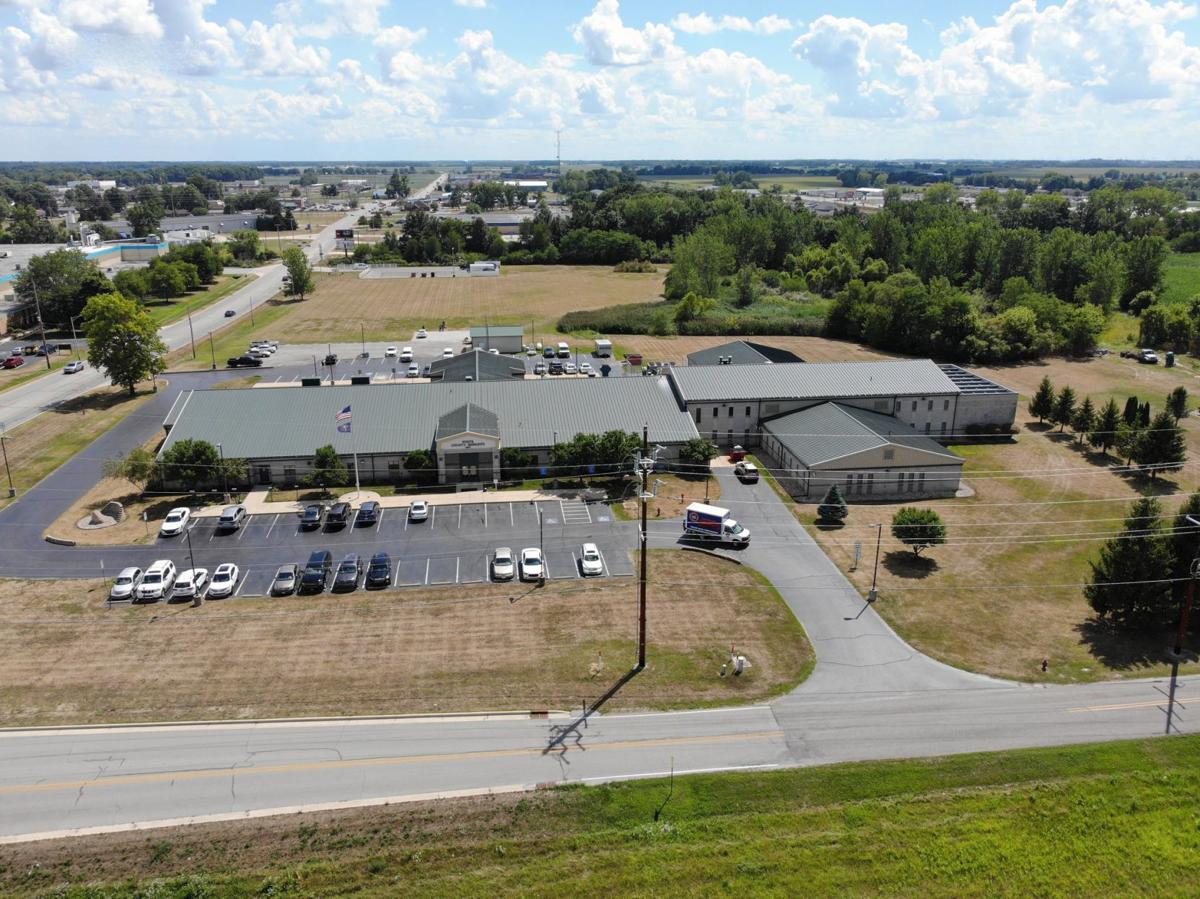 Deputy Evan Morrow pilots a drone for this aerial view of the White County Sheriff’s Department. Sheriff Bill Brooks said the drone will be a critical tool for accident reconstructions, investigations, and search/rescue operations.

Deputy Evan Morrow operates the White County Sheriff’s Department drone while posing for this photo. He is the first deputy at WCSD to train and pass FAA certification, which he did on his personal time.

Deputy Evan Morrow pilots a drone for this aerial view of the White County Sheriff’s Department. Sheriff Bill Brooks said the drone will be a critical tool for accident reconstructions, investigations, and search/rescue operations.

MONTICELLO – The sky’s the limit for the White County Sheriff’s Department.

WCSD is among a growing list of law enforcement agencies around the state and nation turning to unmanned aerial vehicles — commonly referred to as “drones” —for use in police-related activities.

Deputy Evan Morrow so far is the only deputy on staff licensed to fly the drone for WCSD. Brooks said Morrow approached him with the idea — something Brooks told the HJ during his campaign that he would encourage his deputies to do – earlier this year.

“When I said I had an open-door policy, I meant it,” Brooks said. “All this got done because (deputies) walk through the door and I didn’t have to do 100 percent of the work. I give them the freedom to go get me the information so I can make the decision. When you have people dedicated to do that, that’s how all of this comes together. I didn’t do it. We all did it.”

Morrow trained and attended classes on his own time and dime, Brooks added.

Funds to purchase the drone came from the 2019 budget that was introduced before Brooks took office. The drone cost the county about $4,000.

“When Deputy Morrow brought it to my attention and wanted to know if he could pursue it, I said, ‘Absolutely.’ Put the numbers together and let’s see if it works,” he said. “(Morrow) had already obtained his own license. He did that on his own. That’s the dedication that we have here.”

The drone that WCSD purchased is equipped with a camera for still photos and video, as well as infrared and “night vision” capabilities.

Brooks, a longtime helicopter pilot during his career with the Indiana State Police, said the drone is a “great tool” to have in White County.

“I know what the helicopter can do. This drone can do the same thing,” he said. “Sometimes we didn’t find the person, but we were able to eliminate many areas to narrow the searches. It keeps your men and dogs fresh. We’re not having to look at the whole area.”

“That’s what’s important here,” he said. “It eliminates so many areas that it quickens the search and it widens the search … fast. I’m not piloting the drone, but I know what it’s seeing because I’ve seen it for 20 years.”

But Brooks said the drone also doesn’t necessarily eliminate the need to bring in an ISP helicopter.

“This will help us out a lot … immediately,” he said. “We can start searching well before the helicopter is able to arrive.”

Brooks added that the drone can be used by accident reconstructionists, who can take advantage of the technology it provides.

“Accident reconstructionists get tied up because there are so many requests,” he said. “They’ll still be doing hand-on work, but they can do it faster now.”

And, of course, there is the criminal element for which the drone will be useful.

“Maybe we’re going to do a raid, maybe we’re going to do an active-shooter training case. We can take that drone up, take a photo and see where we need to place people and equipment,” Brooks said. “Standing on the ground, you just can’t see it all. You just can’t do it. You get to a scene and find an obstacle, a ditch, a fence or a tree line, whatever that obstacle is. With the drone, we will already know that because we’ve seen it from the air.”

Law enforcement, Brooks acknowledged, can’t use drone technology when and where it wishes. Indiana, House Bill 1358, which went into effect July 1, requires a law enforcement officer to obtain a warrant to use an unmanned aerial vehicle (UAV) over private property or to conduct a search of private property, unless: (1) the owner of the property consents; or (2) a warrant would not be required for a search not using a UAV.

In other words, drones won’t be used to spy on people.

“We can’t just go fly it wherever we want,” Brooks said. “There are laws to protect people. You can’t just help yourself. That’s not the way it works. Deputy Morrow is ever diligent on the latest laws.”

According to Inside Unmanned Systems, a publication devoted to reporting on drone technology, more than 900 state and local police, sheriff, fire and emergency services agencies in the U.S. now have drones, according to data the Center for the Study of the Drone at Bard College collected in 2018. That’s up about 82 percent from the previous year, and many expect drones to become a tool found in every police and fire department, no matter how big or small.

“I’m pretty excited about it. But what’s more important, Deputy Morrow is excited about it,” Brooks said. “This is his pet, his project. He loves it. Fortunately, technology is his thing. Not all of us are equipped with that; he is. Since the technology is ever-changing, he will be up to date on that and tell us new things we can use it for.

“We can’t wait to see what all we can do with it.”

Rain showers in the morning will evolve into a more steady rain in the afternoon. Temps nearly steady in the upper 30s. Winds NE at 10 to 20 mph. Chance of rain 80%.