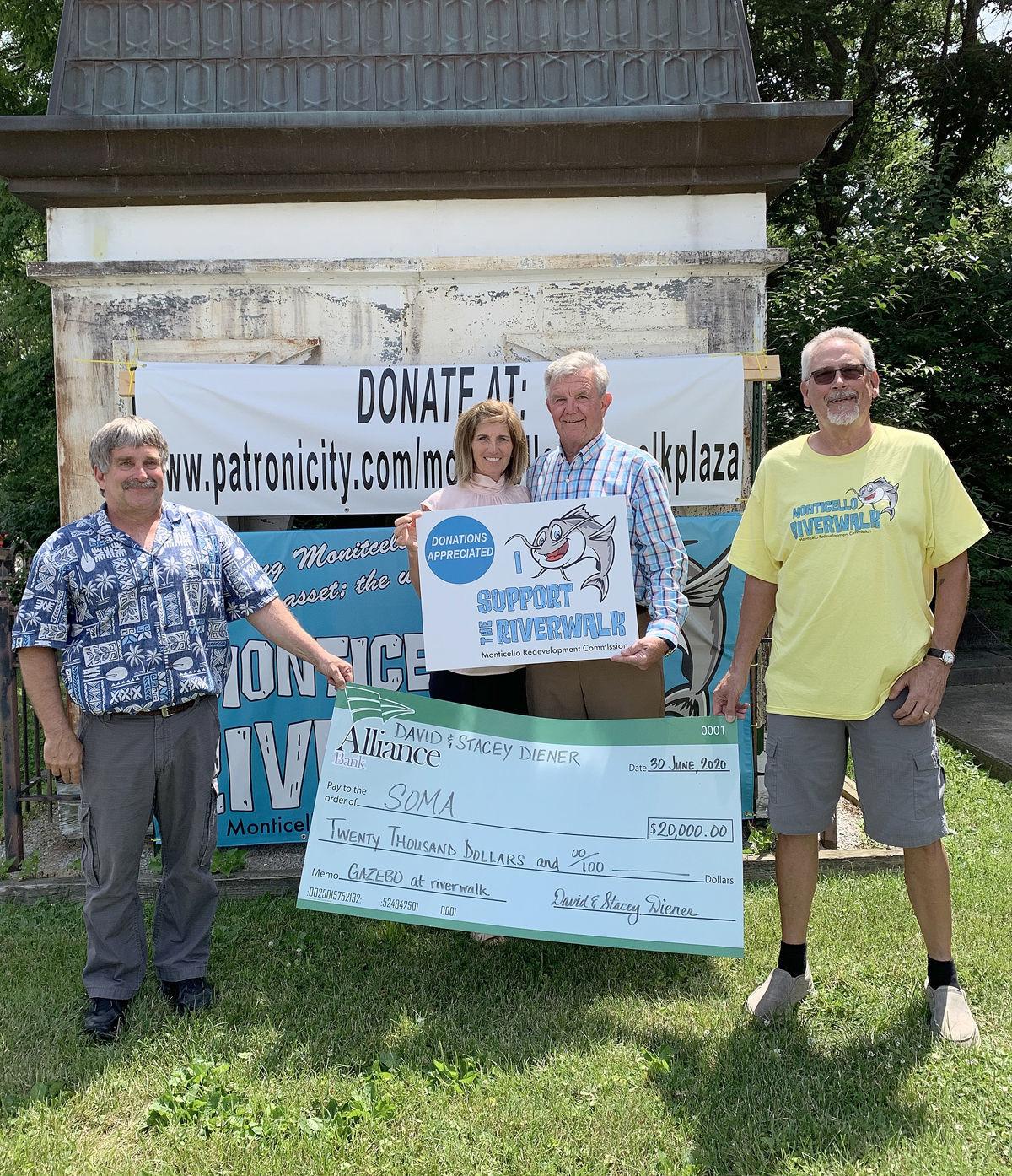 Stacy and David Diener (middle) on Tuesday donated a combined $20,000 to the Monticello Riverwallk Project. The Monticello Redevelopment Commission has now raised about $32,000 toward its $50,000 goal. Also pictured are MRC members Dr. William Misenheimer (left) and Dan Oldenkamp. 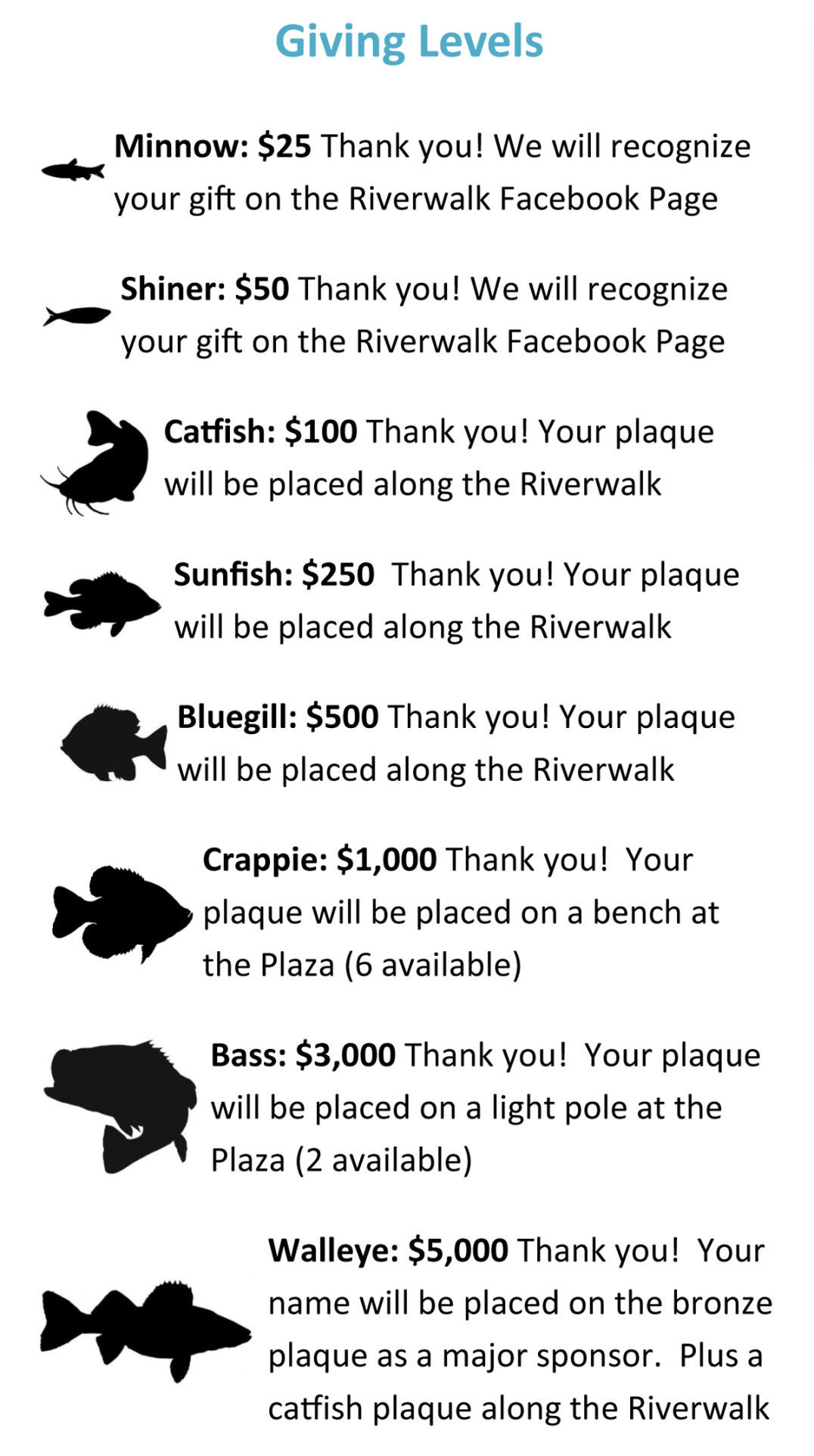 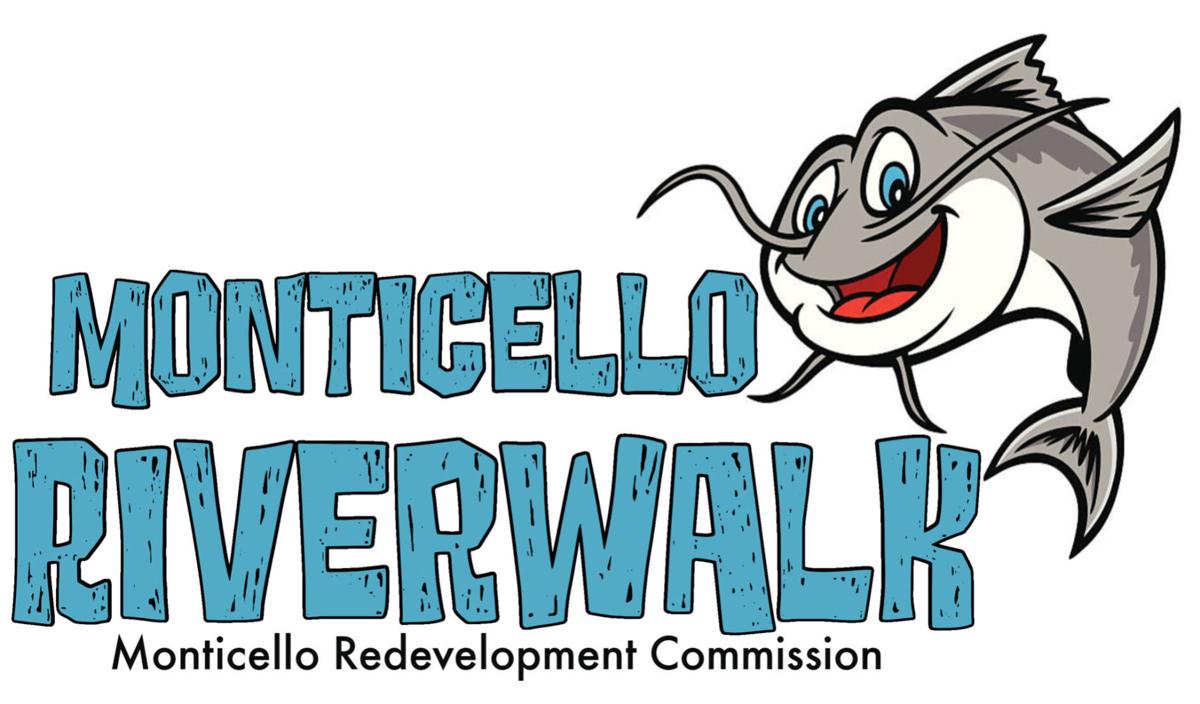 Stacy and David Diener (middle) on Tuesday donated a combined $20,000 to the Monticello Riverwallk Project. The Monticello Redevelopment Commission has now raised about $32,000 toward its $50,000 goal. Also pictured are MRC members Dr. William Misenheimer (left) and Dan Oldenkamp.

MONTICELLO — The Monticello Riverwalk Project received a huge boost Tuesday when a local couple stepped forward and donated $20,000 toward the project.

David Diener and his wife, Stacey Diener, each contributed $10,000 for the combined total.

David Diener is a White County commissioner and Stacey Diener is a deputy prosecutor for the county.

“And we still have about five or six weeks to go,” said Dan Oldenkamp, president of the Monticello Redevelopment Commission which is in charge of the project.

The deadline for the MRC to reach its $50,000 goal is Aug. 15. If the $50,000 is raised through local efforts, the Indiana Housing and Community Development Authority’s “CreatINgPlaces” program will match it.

Funds are being solicited through Patronicity, a fundraising website the Streets of Monticello Association used for its downtown walk-through project fundraiser in 2018. Once the money is raised and matched, the project can qualify for various other funding, Oldenkamp said.

Oldenkamp said the MRC has two fundraising events scheduled for July. One will feature Frankie Rupe, of Frankie Rupe’s School of Guitar in Monticello, who will conduct a “Hometown Heroes” benefit concert July 14 at the White County Building gazebo. It will be conducted in conjunction with the Monticello Farmer’s Market.

The Monticello-Union Township Public Library had also planned to have a band, Travel’s Dream, play as part of its Summer Reading Program that same night.

Library Director Tina Emerick said when she heard about the MRC’s event, she teamed up with Oldenkamp to combine the two for one big concert.

The concert will be free but the MRC will accept donations for the riverwalk project. MRC members will also hand out free hot dogs and water during the concert, while supplies last.

“We’re working on doing that in the safest manner possible,” Oldenkamp said.

“We’re hoping people will clean out their closets or under their desks and get out their bucket of coins that they have,” he said.

Oldenkamp said he has pledged to match the heaviest one with up to $500 of his own cash.

“If someone has a $500 donation, I will match it with $500 and Patronicity will match that, so it will actually be quadrupled,” he said. “Even if you don’t have the heaviest (coin bucket), whatever the donation is, the person will get the appropriate-size fish on the walkway or wherever it might be. We’re hoping to have some fun with it.”

The fish to which Oldenkamp refers is the donation level and accompanying recognition. Those donations levels are:

• Catfish: $100, a plaque placed along the riverwalk

• Sunfish: $250, a plaque placed along the riverwalk

• Bluegill: $500, a plaque placed along the riverwalk

• Walleye: $5,000, name placed on a bronze plaque as a major sponsor, plus a catfish plaque along the riverwalk

There is also a campaign to sell T-shirts emblazoned with the Monticello Riverwalk logo.

While Patronicity is handling the major fundraising, Oldenkamp is also accepting donations by mail. Those can be mailed to him at 1127 E. Ohio St., Monticello, IN 47960, or to the City of Monticello at 227 N. Main St., Monticello.