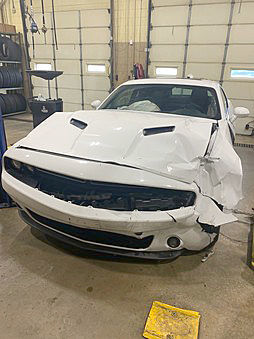 The Dodge Challenger after it rear-ended a min-van on Interstate 65 in Jasper County. 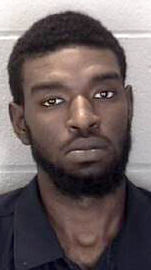 JASPER COUNTY — Two men were arrested Sunday morning after a high-speed pursuit that reached as high as 130 mph through three counties ended in a crash.

Marquinn Morrison, 27, of Lafayette, and a passenger, Tyjah Ealey, 22, of Chicago, were taken into custody after Morrison lost control of the 2018 white Dodge Challenger he was driving and rear-ended a mini-van near the 201-mile marker (Remington) in Jasper County. Police say no one in the minivan was injured and they were able to drive away.

Morrison is charged with resisting law enforcement with a vehicle, driving while suspended/prior (43 separate suspensions on his driver’s license), possession of marijuana, reckless driving in a work zone with workers present, and operating while intoxicated.

Ealey was charged with possession of marijuana.

According to the Indiana State Police, it started around 10:20 a.m. Sunday at the Indiana 25 exit on northbound Interstate 65 in Lafayette when the driver of the Dodge Challenger allegedly sped past an unmarked Indiana State Police patrol car. Trooper Tyler Stinson, officials said, clocked the vehicle traveling 100 mph through a construction zone where the posted speed limit is 55 mph.

Stinson said as the Dodge Challenger, with Morrison identified as the driver, pulled up alongside his patrol car, it slowed and pulled in behind Stinson, who also slowed to allow Morrison to get back in front of him so he could initiate a stop.

Instead, Morrison allegedly took off and sped through a construction zone at about 130 mph where construction crews are working on the Wabash River Bridge (177 mile marker). That’s when other troopers and law enforcement joined as the chase crossed from Tippecanoe County into White County, then eventually into Jasper County.

Both were taken to Tippecanoe County Jail.