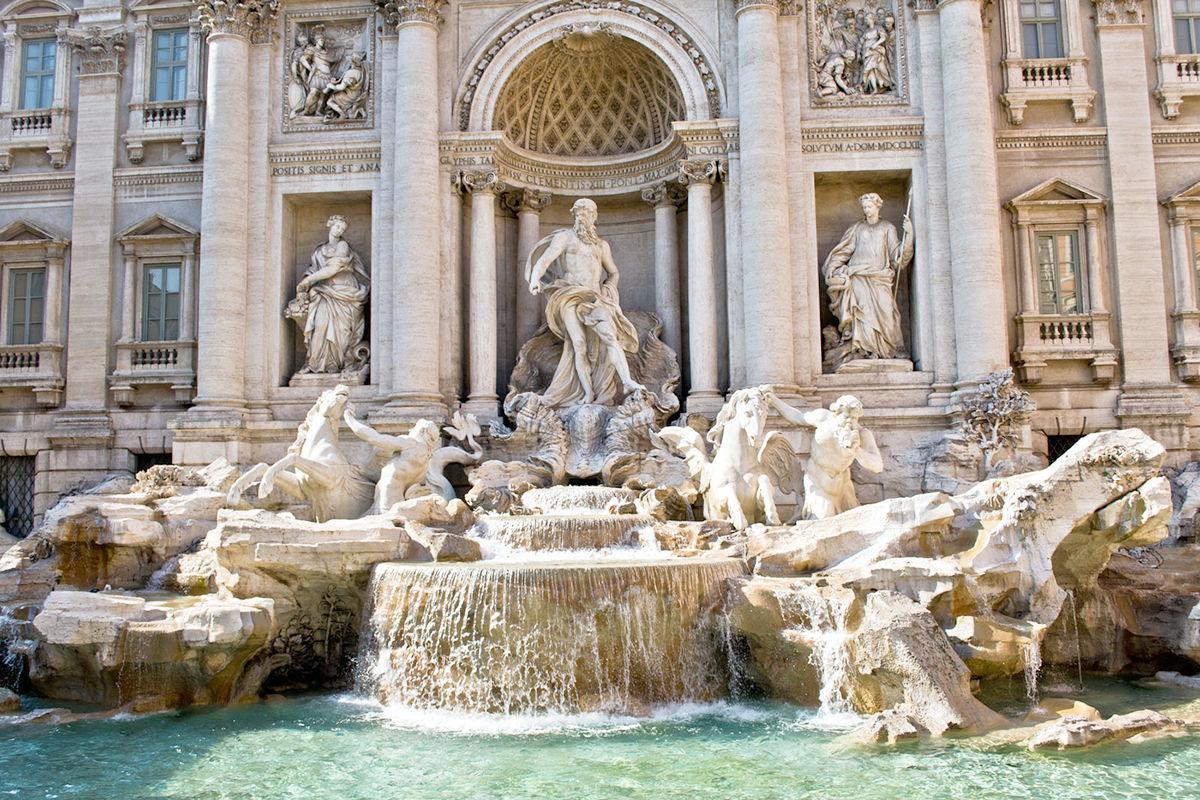 As must-see sites go in Rome, Trevi Fountain is the new kid on the block, not even 250 years old.

But don’t be fooled by this landmark’s youthfulness. Italy’s “Fontana di Trevi” deserves its reputation as one of the world’s most famous fountains.

Featured in classic films such as “La Dolce Vita,” “Roman Holiday,” “Sabrina Goes to Rome” and “Three Coins in the Fountain,” this structure of travertine stone — the same material the Colosseum was built from — is an imposing 86 feet tall and 161 feet wide. More than 2.8 million cubic feet of water (constantly cleaned and recirculated) flow from it daily.

Built at the junction of three roads (“tre vie”) and three aqueducts, there’s been some kind of fountain at this location for 2,000 years. The idea for Trevi Fountain took shape in 1629 under Pope Urban VIII, who commissioned renowned Italian sculptor and architect Gian Lorenzo Bernini to design renovations.

However, the project and Bernini’s sketches lay dormant until 1730 when Pope Clement XII held a design contest. Construction began in 1732 using some of Bernini’s ideas. Architect Nicola Salvi directed the project until his death in 1751, and Giuseppe Pannini completed it in 1762.

Oceanus, the Roman god of water and the motif’s visual center point, stands tall astride his chariot, which is pulled by two sea horses, one wild and raging as the sea sometimes becomes, and one docile and tame. Two Tritons — demigod “mermen” — lead the powerful, winged animals.

Millions of tourists annually flock to the fountain to throw money over their shoulder into its waters. Legend says, toss one coin and you’re guaranteed to return to Rome; toss two coins and new romance will come your way; toss three and marriage is assured.

More than $1.5 million is gathered yearly for charity as Trevi Fountain’s waters flow.

“The steadfast love of the LORD never ceases; his mercies never come to an end; they’re new every morning; great is your faithfulness” (Lamentations 3:22-23).

“Where sin increased, grace abounded all the more” (Romans 5:20).

Sometimes people look at the wreck they’ve made of their lives and wonder, “Does God really love me? Can He ever forgive me?” Some conclude their sins are too bad and too many for even God to forgive; that their situation is hopeless.

POWERFUL WORDS: Who will ascend to God's holy hill?

But God’s grace and forgiveness are limitless. No sin is too heinous and no aggregate amount too much to overpower the wonderful grace of God. No life is so sin-stained that it can’t be cleansed and purified because of God’s matchless grace.

How do you spell grace? J-E-S-U-S! The apostle Paul said, “For the grace of God has appeared, bringing salvation for all people (Titus 2:11).”

The apostle John — who’d spend three full years with Jesus, heard Him teach and observed His love and compassion in action, and seen Him crucified, resurrected and ascended into Heaven, was overwhelmed by Jesus and who He truly was: “God with us” — Immanuel. “And the Word became flesh and dwelt among us, and we’ve seen his glory, glory as of the only Son from the Father, full of grace and truth” (John 1:14).

How do people access this amazing grace of God given through Jesus? By coming to God’s ever-flowing fountain. The old hymn says: “There is a fountain filled with blood drawn from Immanuel’s veins. And sinners plunged beneath that flood lose all their guilty stains.”

When we acknowledge that Jesus is the Christ, the Son of the living God, when we place our faith in Him and are buried, resurrected and united with Him in Christian baptism, we’re cleansed by the all-powerful, all-cleansing, all-forgiving blood of Jesus, the true, eternal Fountain of God’s grace (Romans 6:1-7).

Gregg Nydegger is the evangelist at Christ’s Church at Monticello.

42°
Showers in the Vicinity