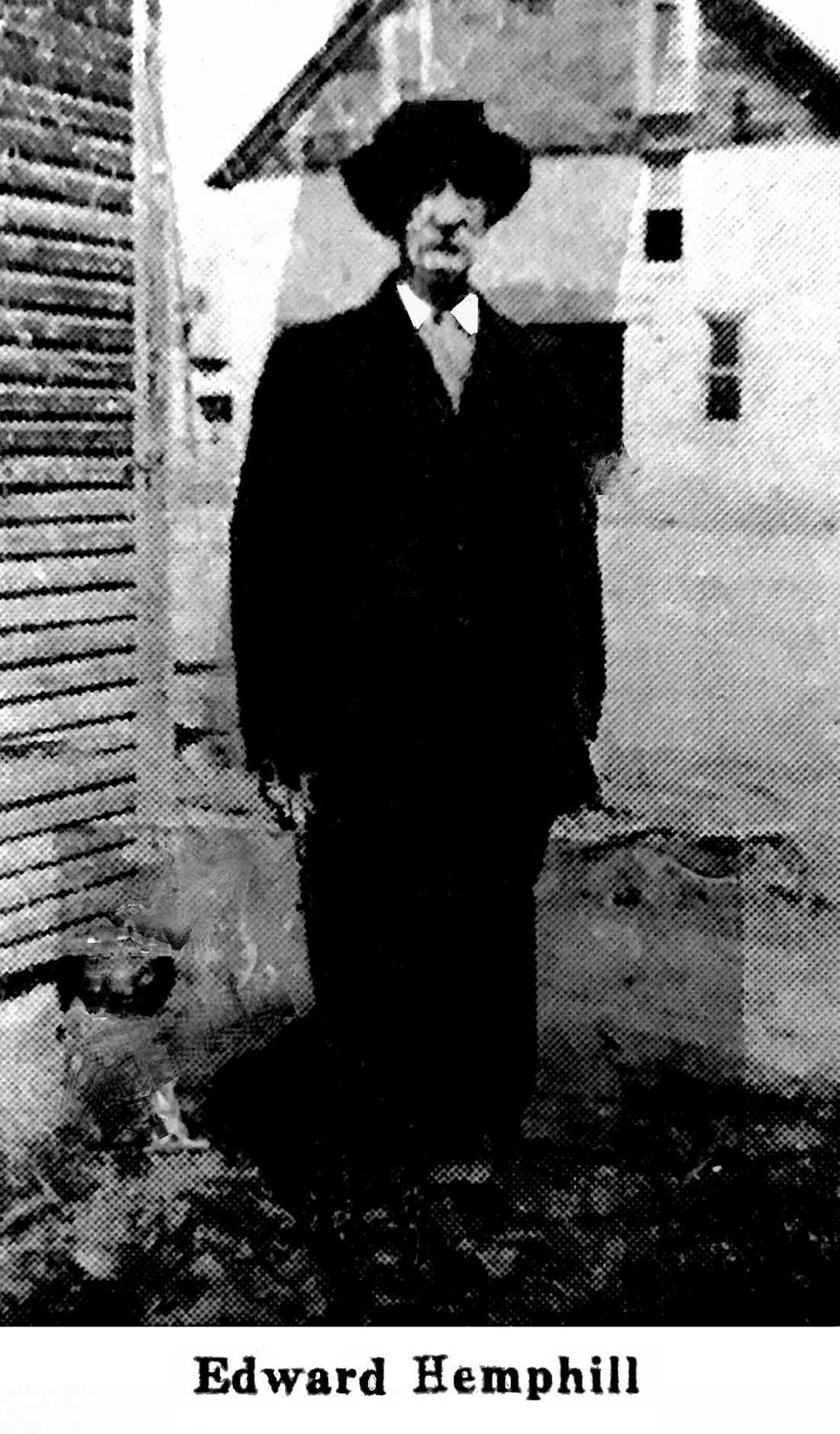 Edward Hemphill was the last surviving last Civil War veteran in White County when this photo was taken circa 1939. He was 95 years old. 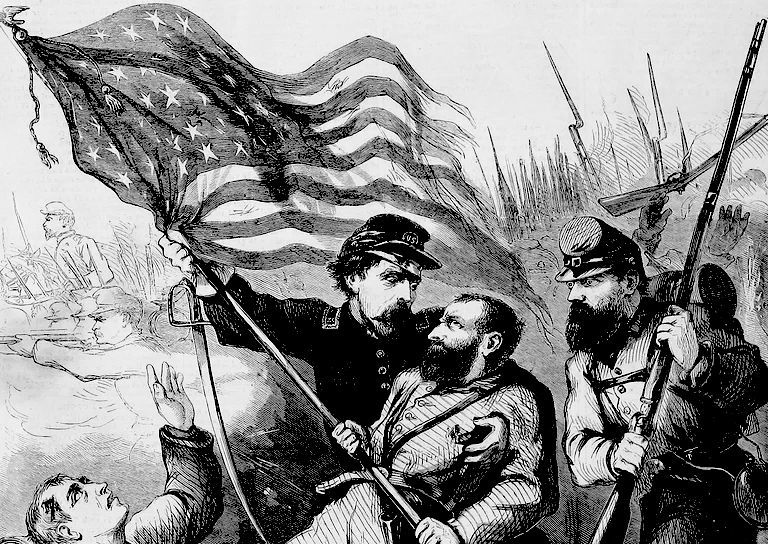 An artist’s rendering of a Civil War battle.

Edward Hemphill was the last surviving last Civil War veteran in White County when this photo was taken circa 1939. He was 95 years old.

An artist’s rendering of a Civil War battle.

On Memorial Day in 1928, services were held over the grave of Capt. James Griffith Staley at the Old Monticello Cemetery.

To memorialize Capt. Staley, a tree was planted on the courthouse square in Monticello. On Memorial Day 1933, a similar service was held over his grave.

So who was Capt. Staley?

He was a White County man who, for one year (1863), was the owner and editor of the Monticello Herald. Staley left to join the Union forces — first with the 9th Indiana where he served for a little more than two years. Next, with help from lieutenants W.C. Kent and Henry G. Bliss, they formed a company of White County men that would be known as Company F of the 128th Regiment.

Of the seven full companies of White County men, this company was the last full company to enter service during the Civil War from the county. The 128th Regiment was mustered into service on March 18, 1864, at Michigan City and traveled to Nashville, Tenn.

It was during the Battle of Franklin that Staley was killed. He was one of the most illustrious White County heroes of the Civil War. An account of his death follows:

”When the Confederate assault was made, Captain Staley was standing up watching the enemy and directing the fire and the use of the bayonets of his men. Just then Captain Bissell, of the same regiment, was shot through the head and fell against Lieutenant Bliss, who, with the assistance of Captain Staley, laid him upon the ground and placed a blanket under his head. This had scarcely been done when someone called out, ‘They are coming again,’ and all prepared to receive the enemy. As Captain Staley turned to the works, a minie ball struck him in the forehead, and he, too, fell into the arms of Lieutenant Bliss and died almost instantly. There was no time then to listen to parting words. A desperate hand-to-hand conflict was straining every nerve for the possession of the breast works. The deadly musket shot, the clash of arms as bayonet came to bayonet and sword to sword, the hurried breathing of the men through their shut teeth, their words of encouragement and mutterings of vengeance, with the thunder of the two pieces of artillery that flanked the company combined to bring into heroic exercise every muscle of the body and every power of the mind.

”Darkness came on and still the fighting continued. Every man was needed to repulse the desperate assaults of the enemy. The body of Captain Staley was carried to the rear by the stretcher corps and buried in the same grave with that of Captain Bissell, near the large brick dwelling house on the hill south of Franklin. Though our regiment had repulsed the rebel army, it was determined to withdraw under cover of darkness, and at midnight we retreated across Harpeth River and abandoned the battlefield and Franklin to the enemy.”

The bodies of Staley and Bissell of Company A of the 128th Regiment body were later exhumed and shipped back to Porter County.

The Account Book of Undertakers Lamb & Barr of Columbia, Tenn., dated Feb. 2, 1865, has an entry: “Disinterring the remains of Capt. Staley at Franklin, Tenn. $15.”

Staley’s remains were recovered and brought home, through the efforts of the Christian Commission arriving at Monticello on Feb. 7, 1865. On Feb. 12, Staley was reinterred with appropriate ceremonies in the Old Monticello Cemetery. He is one of the few White County men killed during the Civil War whose bodies were returned to White County for burial.

The headstone for Staley was a result of Congress allocating funds for those men who died in battle that were buried in public cemeteries. In 1879, Congress expanded the headstone program to include burials in private cemeteries like the Old Monticello Cemetery.

While researching Staley for this article, an unanswered question arose: Who was the last Civil War Veteran to die in White County?

The answer required looking into several older Civil War veterans. In a few hours, I found the article that I had been looking for. It came from the Monticello Herald and is printed as follows:

”Edward Hemphill, 95, White County’s last surviving Civil War veteran and oldest citizen of the community, died Wednesday morning at 1:30 in the home of his granddaughter, Mrs. Hope Bristow, in Wolcott. His death on Jan, 3, 1939, was due to the infirmities of age which had caused him to be bedfast the last three weeks.

”Last rites were conducted Thursday morning at 10:30 from the Wolcott Christian Church and burial was made in the Dobbins cemetery. Rev. C. C. Cole of Colfax officiated.

”The deceased was an active factor in the business affairs of Wolcott for many years and was the last survivor of the Indiana veterans of the Union Army in White County. He spent nearly all his life in White County as a prosperous farmer and businessman.”

His father, Andrew Hemphill, was an early settler in Indiana, locating in White County on Sept 19, 1847, and settled in section 1, Range 6 West in Princeton Township. He was a farmer and miller by occupation, and at the time of his death his visible prosperity was indicated by the ownership of 440 acres.

Edward was born Sept. 30, 1843, near Attica in Fountain County. At just 4 years old, he moved with his parents to Princeton Township, where he attended some of the old-time schools kept in the township during the 40s and 50s.

In 1863, he enlisted at Lafayette in Company K of the 116th Indiana Regiment. In 1865, he re-enlisted and was a member of Company G of the 157th Indiana Infantry and continued service until he was honorably discharged at Indianapolis in the fall of 1865.

Though he participated in several important campaigns during the war and was present at a number of battles, he escaped without wounds, capture or disease. After the war, Edward became a farmer.

In 1866, Edward joined the Masonic Lodge in Wolcott as a charter member and for many years was a member of the Grand Army of the Republic at Rensselaer. He was a member of Christian Church and as a Republican cast his first ballot for Abraham Lincoln and supported every presidential candidate of that party since.

Edward would gain his prosperity through his own efforts, having inherited only 40 acres of land from his father’s estate.

In June 1889, Edward was working as a brakeman for the railroad and had his leg caught under the wheels of a freight train. The injury consisted of a cut extending from his ankle to near the knee. Dr. William Spencer cared for him throughout the ordeal, but he was disabled for the rest of his life as a result of this injury. In the end, his foot had to be removed.

In 1931, Edward moved to Wolcott and was proprietor of the Hemphill Feed Stable.

At the Old Settlers program in 1938, Edward was honored with a gold-headed cane as the oldest resident of White County. At age 94, he had lived in the county for 91 years. I wonder what happened to the gold-headed cane?

Well there you have it — two White County mysteries solved.

As an addendum, I’ll add that the veterans groups in the county might want to consider honoring our distant and now-faded battle-worn men who served our country with distinction so many years ago.

Areas of freezing rain possible early. Cloudy with occasional light rain...mainly in the morning. Winds increasing for the afternoon. Morning high of 43F with temps falling to near 30. Winds W at 20 to 30 mph. Chance of rain 80%.