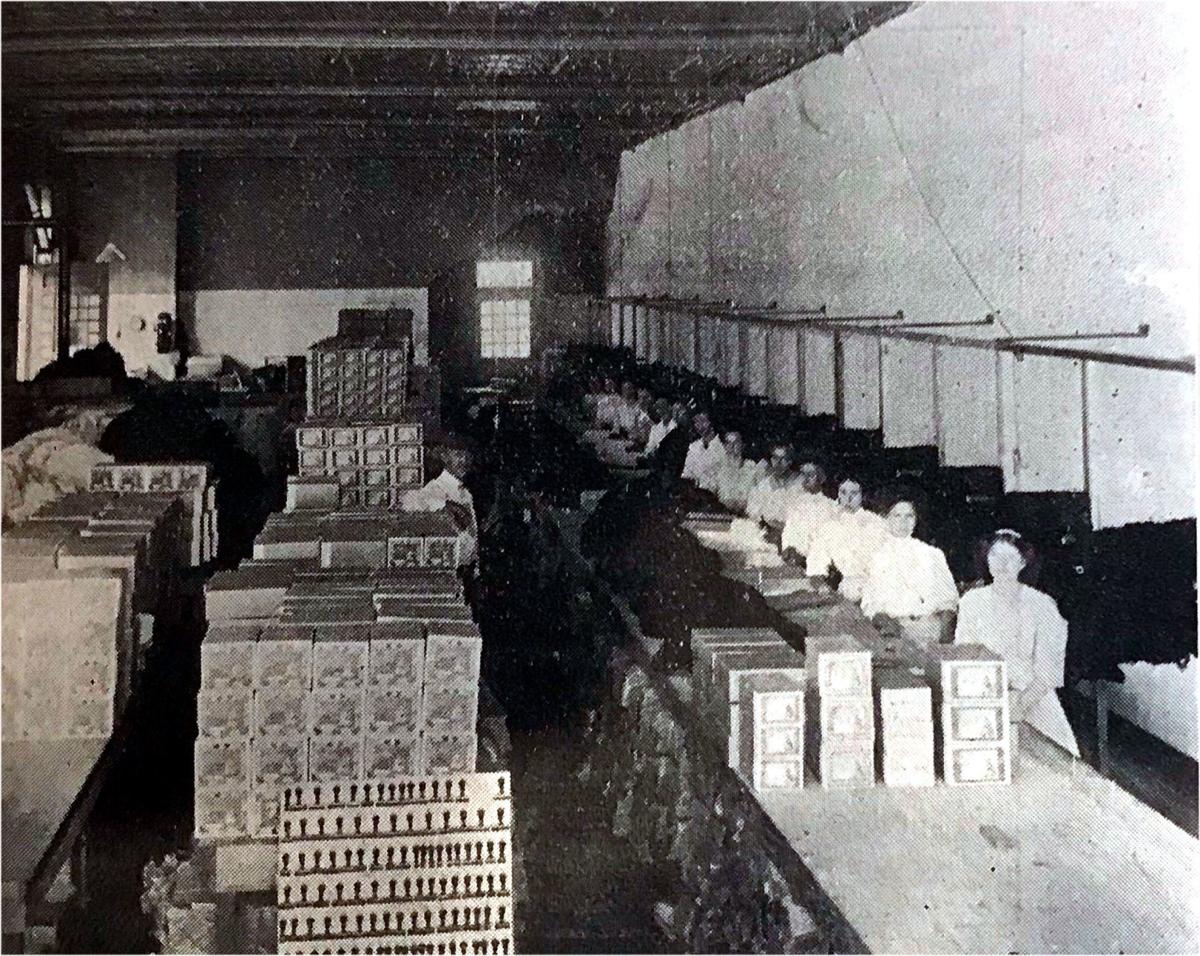 The interior of the thread mill’s wool department. 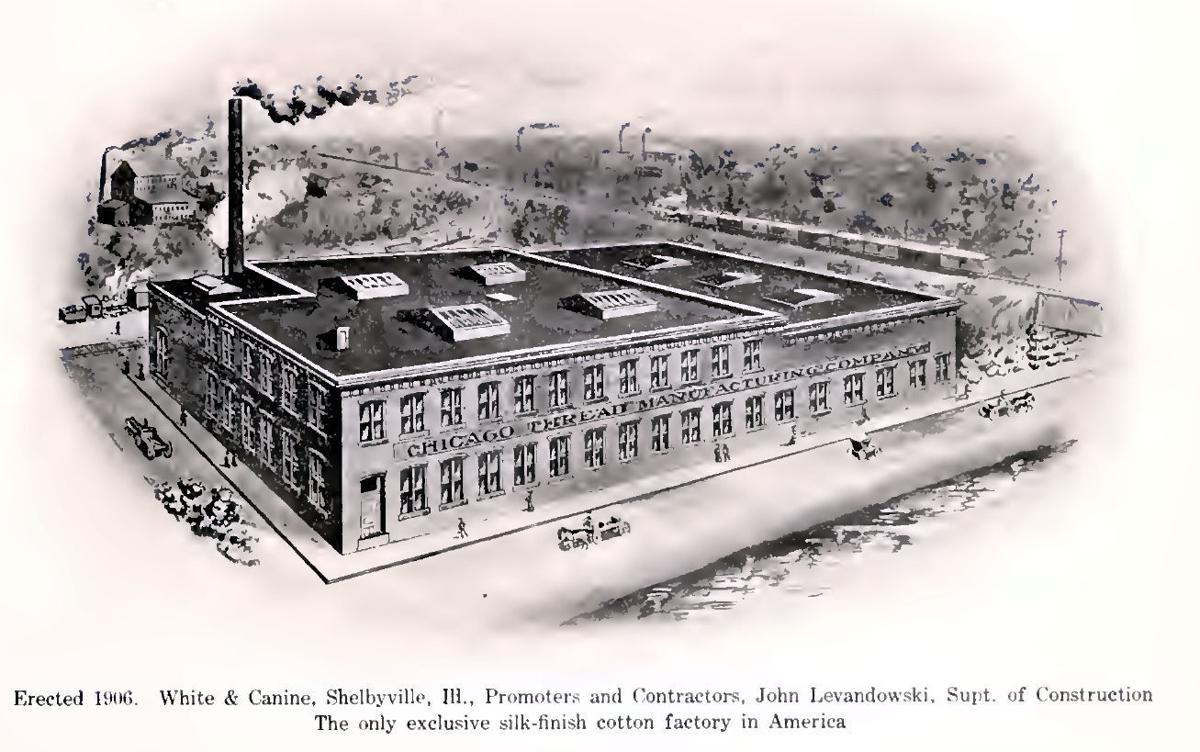 An illustration of the Chicago Thread Manufacturing Co., built in 1906, as the only exclusive silk-finish factory in America.

The interior of the thread mill’s wool department.

An illustration of the Chicago Thread Manufacturing Co., built in 1906, as the only exclusive silk-finish factory in America.

One of the first results of commercial organization in Monticello was the location of the Chicago Thread Manufacturing company in the fall of 1906.

A building was erected for them that sat at the foot of the hill on East Marion Street, just south of the Pennsylvania railroad bridge.

In early 1907, it became a flourishing industry that employed to 50-60 girls and men while the rest of the nation was in panic over a financial crisis that took place in the United States over a three-week period starting in mid-October, when the New York Stock Exchange fell almost 50 percent from its peak the previous year.

This was also known as the 1907 Bankers’ Panic or Knickerbocker Crisis The financial panic of that year certainly didn’t limit the newly built thread mill. Its machines continued whirring through the whole downturn.

The product it produced was called “Klostersilk,” a trademark article of sewing thread. The product was the closest thing to genuine silk of all the cotton products on the market at that time. Its high luster, evenness of spin and twist, uniform strength and pure dye fast colors created a huge demand for the product and taxed the capacity of the tread mill in Monticello.

Demand was so great that by the end of 1910 another new building was nearing completion which was even larger and more substantial than the original plant. Plans at that time were in the works for yet another facility on the property.

Stevenson served as superintendent of the facility and both he and Smith became local residents.

Monticello’s Push Club was extremely active in luring the thread mill to town. While other investments made by the city were somewhat disappointing, the thread mill was a home run.

The thread factory paid out more than $100,000 in wages during its first three years. As the company grew, more employees joined the ranks of the company. Monticello’s tax base and property valuations also increased. The factory allowed Monticello to become electrically lit day and night as well as provided increased work for local construction laborers and tradesmen.

The processes of manufacturing Klostersilk gave the product a leg up due to the peculiar and patented way it was made. The sale of the product seemed limited only by the ability to produce it.

The company had sales offices in Chicago, St. Louis, Cleveland, Buffalo, Detroit, Kansas City, San Francisco and Gloversville, N.Y. To supply all these distribution centers, the company had to expand its facilities to satisfy the demand for the product.

So how much thread did they actually produce? An article published Dec. 8, 1910, in the Monticello Herald stated, “The factory is turning out 2,863 miles of thread a day.”

Now that is a lot of thread!

Back in 1910, the thread factory ran six days a week. If one subtracts a few holidays, inclement weather, etc., the reality is this one facility in Monticello was cranking out 860,000 miles of thread per year. This is enough thread to wrap around the earth 34 times every year.

The thread factory settling in Monticello was the envy of everyone surrounding White County! Ads were placed in Delphi and Logansport continuously looking for more employees. When the factory became operational, it was the shining light of success for Monticello and it citizens.

With the completion of the 1910 addition, the total floor space exceeded 45,000 square feet. This space was a combination of the actual manufacturing, packing, shipping and offices. The addition allowed more room for all of its operations at the factory.

The ground floor of the Odd Fellows Block had been utilized for what is known as their wool room, where a number of employees could be found. Storage space was also at a premium before their 1910 expansion. The old light plant located near the factory had been rented for this purpose.

With the new expansion, the Odd Fellows building and the old light plant were vacated where everything could be centralized in one facility.

The raw material to make the thread came from cotton yarns in large skeins. The first department it entered was the dye room that was in charge of James McCallum, an expert dyer formerly in the employ of the American Thread Company at Willimantic, Conn.

Much of the popularity of the Klostersilk is due to the uniform brilliant and fast colors given them in this department. From here, the yarn passes successively through the processes of drying, winding, dressing, spooling and packaging for shipment. Most of these steps were under the supervision of Mr. Alvin Oldershaw on the second floor of the building.

The yarn, when it comes from the drying rooms on the ground floor, goes first to the winding machines, where it is wound from skeins to bobbins. Then it goes to the dressing machine in a room where the temperature is kept at 110 degrees. Here, the yarn or thread passes from the bobbins through a paste-like preparation and over a series of brushes, which when it dried and gave it a brilliant gloss.

The thread or yarn then goes to the spooling machines where it was wound in various sizes and sold in the marketplace. The spools then enter the packing room where it is packed, labeled and shipped to market.

Considerable amount of the work done in the old factory was transferred to the new facility. The dyeing department would remain in the old building on the ground floor of the original building, while on the second floor kept the spooling machines and dressing department.

The first floor of the new building housed the offices and stock room. The second floor was dedicated to the winding machines, the spool printing and labeling department, the crochet bailing machines and also the universal winding machines, on which the thread was wound in cones and tubes for the manufacturers.

Additionally on the first floor were packing tables where each product line produced would be boxed and ready for Mr. Costello, the shipping clerk, to fill the orders of the company’s customers.

From a marketing viewpoint, the tread company developed a machine that would send out sample cards of every imaginable shade of thread or floss that bore the name “Klostersilk.” This specialized machine ran groups of cards from a large cylinder. While this process saved significant time, there still remained a lot of handwork to get these sample cards out to customers.

The new building architect was prepared by D.H. Burnham & Co., of Chicago. The superintendent in charge of the work was Adolph Friedman. Local contractors were Charles Roth and Mel Ireland for all of the carpentry work and Frank Hodshire and L.A. Young for the masonry and concrete portion.

According to the Monticello Herald, “The work could hardly have fallen into better hands, as it was well done throughout. This is the best example of mill construction in Monticello.”

The entire factory was converted to steam heating and was electrically wired for lighting throughout. One shocker to me was that the entire facility had an automatic sprinkling system which, like today, was a network of piping throughout the building with water supplied by a large water tank elevated 25 feet above the roof.

To keep the tank from freezing in the winter, the water tank utilized the steam heating system that was extended to the tank. This fire protection system cost about $6,000 to install. The company felt the reduction in the cost of insurance would pay for the system in a few years.

The contract called for a completion date of the end of 1910 for the new addition and the changes to the original building. The workmen completed their task with 10 days to spare and the building — with all machinery in place — was operational on Dec. 20, 1910.

The tread mill was the first effort of the Push Club to bring manufacturing to Monticello. It was indeed a success and would continue operations until 1941 when the plant was combined with another owned by the company in the south. Bryan’s Manufacturing would later occupy the facilities in Monticello.

The thread mill project is yet another example of the local business community coming together, recognizing the need for more manufacturing jobs, securing the funding to “push” Monticello into a vibrant productive and efficient place for manufactures to build new factories during the 1910s and 1920s.