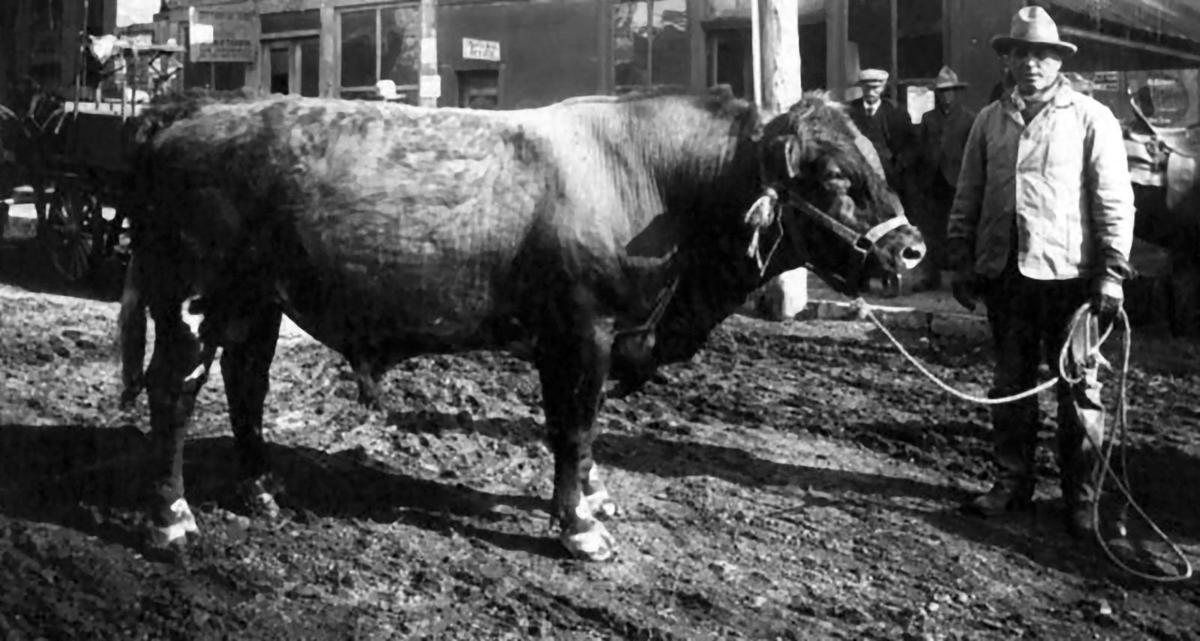 It was a common sight in the 19th century to see farm animals in downtown Monticello.

It was a common sight in the 19th century to see farm animals in downtown Monticello.

As a kid in Monticello who lived in town, I was fortunate to have a classmate named Tim Bernfield as a friend. He introduced me to life on the farm.

Their small farm was located on the old Price Farm that bordered Roosevelt High School to the west back then. I would go to play on the farm and do some “chores” as part of any visit.

Through “farm-time” with Tim, I found myself participating in killing rats around the feed barn, pulling hay bales from the barn loft, feeding the cows, farrowing pigs, castrating hogs and always having a great time.

While I miss those times, I always smile thinking about them. That is, until I found a few articles about heifers and cows and how they aren’t necessarily in the running for man’s best friend.

The following is a review of tense moments for a few residents in White County:

Folks in the southwest corner of Monticello had recently been terrorized by a pair of two-year-old heifers which seem to have no respect for the dominion of man.

John Zink bought the two heifer calves and had been keeping them in a pasture near Yeoman until they had reached a proper size to make good butcher stock. The pasture was distant from the public highway and their lives were spent out of the sight of humans.

The time came for the heifers to be driven to town and the beefy animals seem to have an overall disdain for the human species. Apparently they regarded humans as enemies. Perhaps they were confronted with an inkling of their future.

The enclosure prepared by Zink for the two heifers was apparently too small. The pair soon escaped and roamed the streets of Monticello. The heifers immediately became belligerent at the sight of a human being.

Charles Dodge was one of the first victims of their wrath. Though he was a young man who knew no fear, one of the beasts chased him until he had to take refuge in a house, which he entered uninvited and without the normal ceremony, just in time to slam the door in the heifer’s face.

Schuyler Dobbins was also given the chance to show his sprinting abilities when one of the animals moved unexpectedly and gave him a run for his life.

The event would have gone badly for “Skike” (Schuyler’s nickname), had he not happened under an apple tree just as the brute was about to overtake him. Realizing his desperate situation, he seized a limb of the tree and by a “skin of the teeth” movement, he swung aloft just as the heifer brushed his coat tail in passing underneath him.

It is said that Skike continued to stay in the tree even after the heifer was far away.

Hugh Davis, hearing of the situation remarked, “Why don’t they just tie him up?” Davis started toward the heifer with rope in hand to wrangle the animal. It didn’t take long until he came back a sadder and wiser man.

HISTORY'S MYSTERIES: You don’t know what you’ve got ... 'til it’s gone

Harry Zink took a more aggressive approach. He armed himself with a rifle, approached the wild brute and got close enough to get it to turn its head towards him. Hugh shot, and the bullet buried itself in the heifer’s forehead, whereupon the heifer dropped to the ground.

Area residents who witnessed the event or heard about it were delighted to feed upon its steak. As to the other heifer, at the time the article was printed, it was still at large.

Telegraph operators are prone to electric shocks during thunderstorms, but it is safe to say that Miss Ella Green of the Chalmers telegraph office perhaps experienced an even greater peril.

Miss Green learned the telegraphing business from Station Agent Wren of Rensselaer. She was working at the Chalmers station as a night telegraph operator. In August 1889 about 8 p.m., a cow, which a butcher was driving into town, had become mad from all the running and beating and ducked into the telegraph office for relief.

The cow ran into the waiting room of the depot and then into the telegraph office where Miss Green was engaged in sending a dispatch. Books, papers and office supplies became scattered in every direction in the rearranged room.

It was a vicious attack where Miss Green was thrown against the stove and the letter press. She managed to get upon a table, whereupon the cow also jumped on the table with her fore feet. Miss Green was trampled upon and fortunately able to escape from the building through a freight room door.

Miss Green was attended to by a physician. The doctor reported that one of her thumbs was dislocated, her arms badly bruised and she was thought to have internal injuries.

Even a dead cow can hurt you

I cite the incident of Olivia Spencer, of Honey Creek Township. Her husband, Solomon, had just killed a beef in an enclosure. At the time, he gathered the assistance of all male help that was at hand.

The men tied a rope around the horns of the animal. However, the men could not budge the carcass out of the enclosure. Olivia, seeing that they needed more hands and power on the rope, took her place at the end of the rope to help.

As all hands joined in a strong pull, all of a sudden the horns of the cow came off, letting the whole line of men fall heavily to the ground. Mrs. Spencer fell across a rail sustaining what was feared a fracture of the thigh bone within the hip joint.

Dr. Clark was called but was unable to make a positive diagnosis of the injury. Regardless, a long tedious recovery was in store for Olivia.

I always thought the bulls were the aggressors. I guess not!