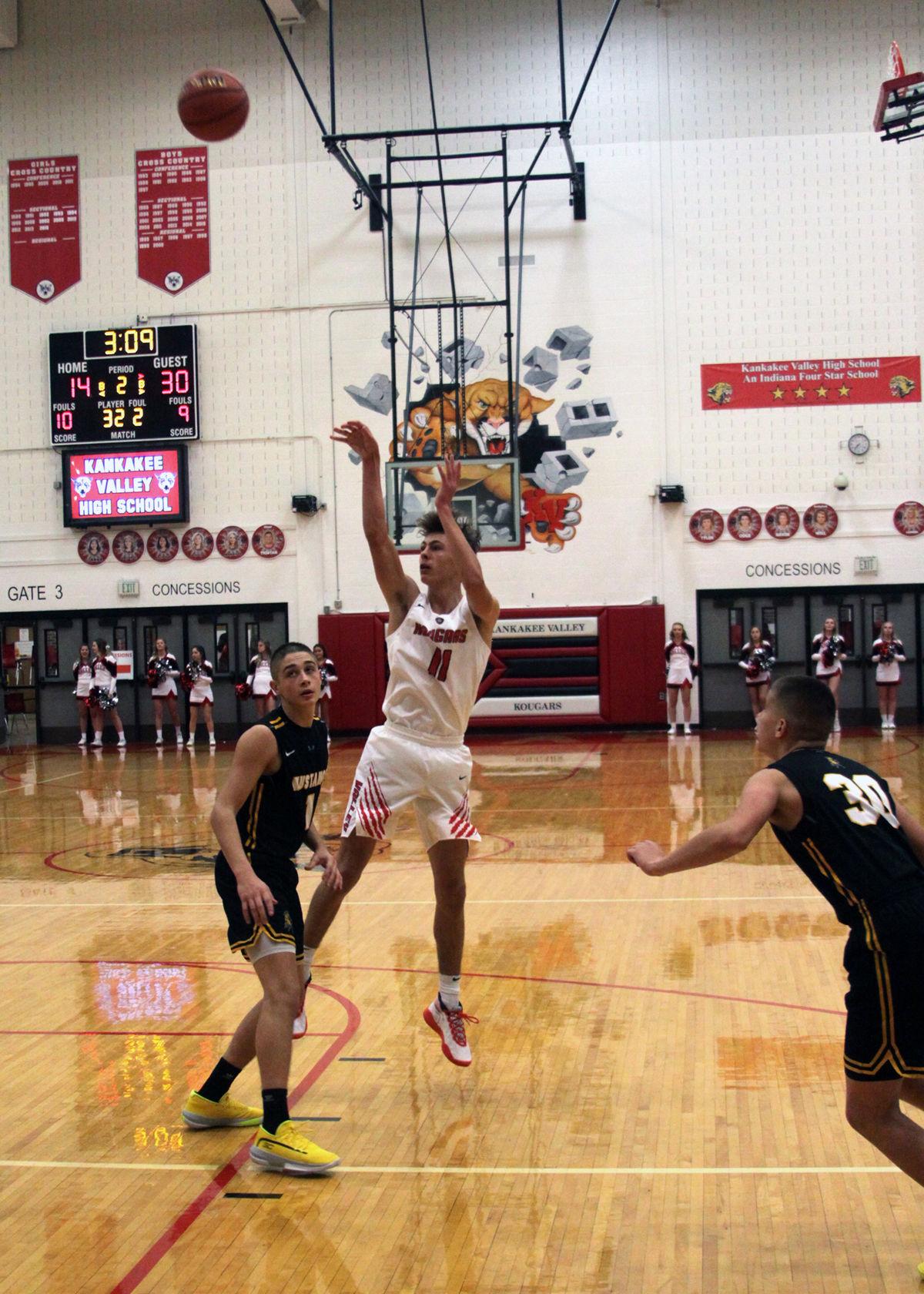 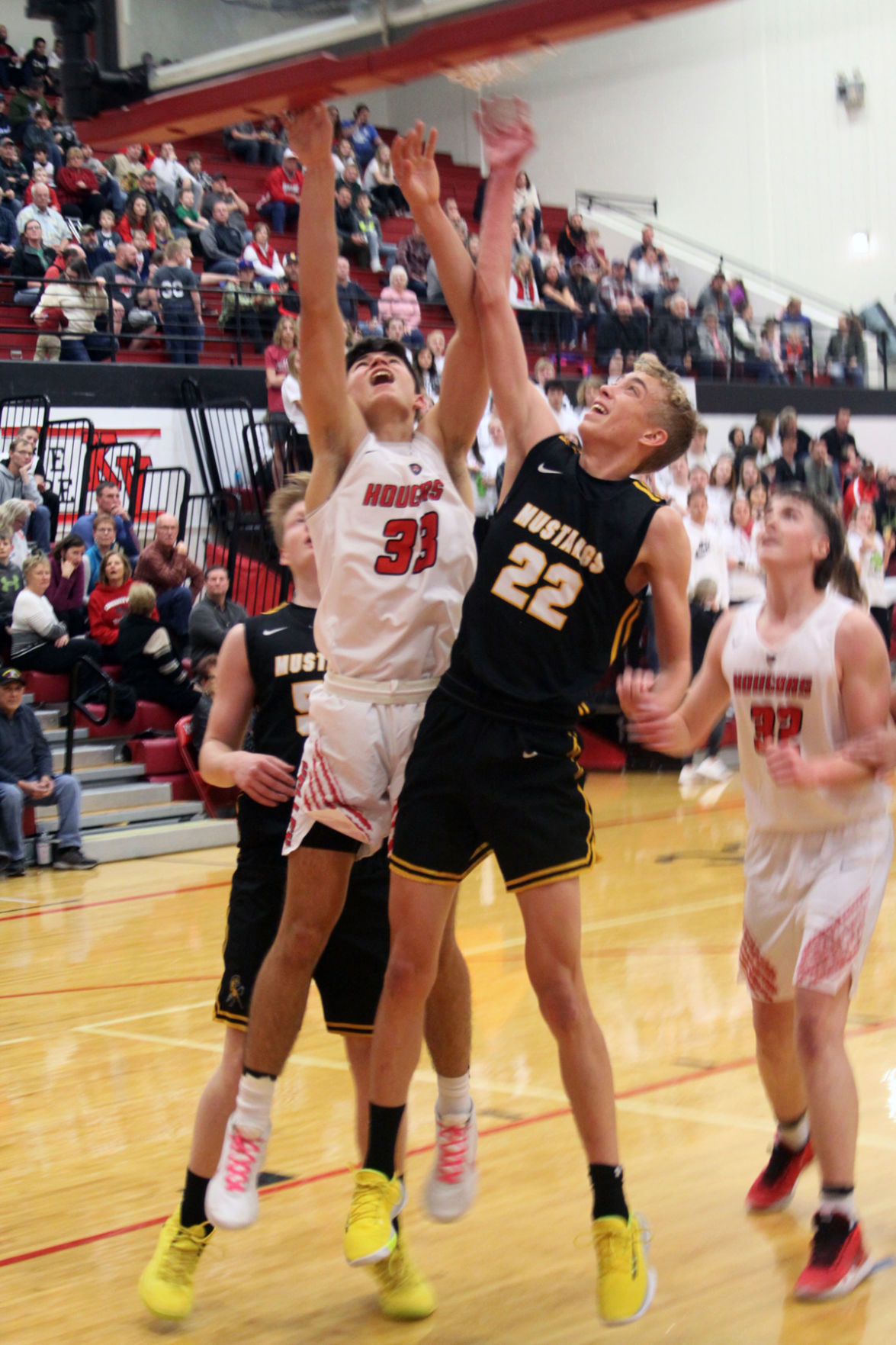 WHEATFIELD — The Kougar Boys’ Basketball team may have been beaten twice over last weekend but in the second game, held on Saturday, Dec. 7, Kankakee Valley came this close to an upset over the tough Kouts Mustangs who needed overtime for the 51 – 47 win. The Kougars may have felt like they had double vision as they played since Kouts features two sets of twins as starters, with Cole and Cale Wireman and Parker and Hunter Kneifel. All are juniors.

The game started as many predicted, with Kouts jumping out to a 22 – 6 lead in the first quarter. After all, Kouts had outscored West Central 115 – 21, Hebron 82 – 74 and Covenant Christian 91 – 45. Cole Wireman scored nine of those points and senior Connor McCormick added eight. The Kougars seemed unable to stop the Mustangs or hit the net. KV junior Elijah Carden had five of those six points but no one else really contributed.

The Kats started to come alive in the second quarter on both ends of the court, holding Kouts to just eight points while hitting 11 of their own. Five Kougars found the net and their physicality began to wear on Kouts. The score was a much more closer 30 – 17 as the teams headed into their locker rooms

After the break, Carden came out on a mission, hitting three treys and scoring 12 points in the third quarter on his own. That intensity seemed to spur his teammates on and they also seemed to step up. As the third ended, suddenly KV was within seven after scoring 18 points to the 12 of Kouts.

Both teams appeared a little tired as the fourth kicked off but Carden hit his fifth three-pointer of the night and followed it with yet another after a Kouts turnover. It was at that point that Kouts went into a slowdown, holding the ball just over half court and refusing to advance the ball. The Wireman twins took turns standing with the ball, daring KV to come out and force them to play. All stood their ground with the Kougars firmly entrenched in the zone. Over two minutes wound down with the large home crowd booing emphatically.

KV finally moved out to force the issue and after a two by Nick Mikash, took the lead 43 – 42, which brought the crowd to their feet. After another forced bad shot by Kouts, KV junior Matt Caldwell was fouled and made both free throws to put the Kougars up 45 – 42 with just 28 seconds left. At 24.9, Hunter Kneifel put up a three that went in to tie the game at 45 – 45. On KV’s ensuing possession, the team was unable to get off a shot before the buzzer, sending the game into overtime.

Kouts won the tip in the bonus period and Cole Wireman was fouled on a drive to the hoop by KV senior Will Dyniewski, He missed his first shot but hit the second. KV then brought the ball up and Mikash was fouled on the shot. He missed both, giving Kouts the ball. Cole Wireman put in two and Carden matched it putting the game at 48 – 47. After a turnover, Hunter Kneifel was fouled and drew the 1-and-1. He made the first but missed the second to go up 49 – 47.

After a missed shot, KV was forced to foul and Connor McCormick made both, putting the game out of reach at 51 – 47. KV would have one final possession, but with very little time left, were unable to get off a quality shot.

While KV may have lost the game, Coach Bill Shepherd was justifiably proud of his team after the game.

“This is definitely a step in the right direction,” said Shepherd. “We learned a lot about ourselves tonight. It tells a lot about these guys when they didn’t give up after being down by 16 in the first quarter.”

Scattered snow showers during the evening. Then partly to mostly cloudy overnight. Low 13F. Winds WNW at 10 to 15 mph. Chance of snow 30%.

Scattered snow showers during the evening. Then partly to mostly cloudy overnight. Low 13F. Winds WNW at 10 to 15 mph. Chance of snow 30%.